When my mom was signing everyone up for the summer race series Ty and I talked about what race distances to do. We decided that we'd take turns running the 10k so whoever ran the 10k could run without the stroller and the other one would run with the stroller in the 5k. I didn't think I'd be in shape for a 10k by June so I decided to sign up for the 5k at the first race and Ty did as well. When I got my schedule from my coach he had down for me to run a 6 mile tempo. After discussing how I'd run the 5k with the stroller as the first half of my tempo and then pass the stroller off to Thomas or my dad at the finish so I could run the final 3 miles of my tempo, we realized it just made more sense for me to transfer to the 10k so that's what I did. Our morning consisted of walking to get sno cones and then playing in the backyard with water balloons. We left around 7:00 to head to the race. I ran the most enjoyable race warm-up ever as I ran the mile fun run with Carter. Then Jeremy and I headed to the starting area for our race. 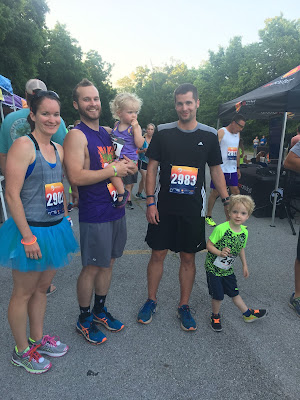 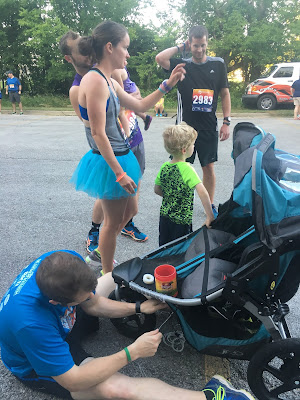 Jeremy and I headed toward the front of the corral and stood together for the start. My coach listed my tempo pace as 7:02-7:34 pace. Since I'd run my 7.75 mile leg of the Joplin Memorial Marathon Relay in 7:36 pace I decided to use my friend, Sara's, tempo strategy and take off at the upper end of my pace range and then try to drop toward the bottom of it by the end. The first mile of the race is a gradual downhill for most of the first half to three-quarters of a mile so the first mile of the race usually goes out pretty quickly. I went through the mile mark in 7:20 with Jeremy right with me. We talked more in the 2nd mile and discussed how cute the kids were in the fun run. I told Jeremy my plan and he said he wasn't planning on running much under 7:30 pace so he'd stick at his pace when I took off at the half-way point. We went through the turn-around for the 5k which had a water stop and I grabbed water since it was so hot. Jeremy went for a water but he and the volunteer didn't connect and it dropped to the ground. At that point be crossed a road while continuing on the trail. The 10k crosses 3 or 4 roads on the way out and then again on the way back. As Jeremy and I ran along during the second mile I really appreciated his presence. I remembered running the 10k at the Blue Moon 10k last August and how I was completely alone pretty much the entire race from the mile mark on. We went through mile 2 in 7:29. 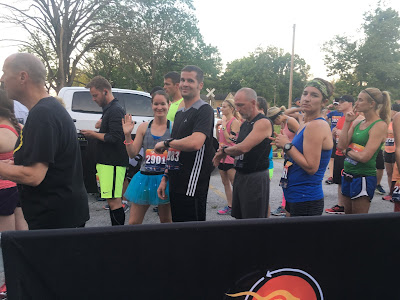 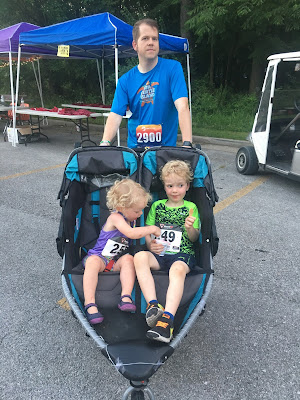 During the 3rd mile I started getting excited that we were almost half-way done and I was feeling really strong. I ended up speeding up more than I realized during that mile which we went through in 7:11. I decided to try to keep the rest of my miles under 7:20 if I could. We went through another water stop at the turn around and Jeremy took a water but choked on it and said he felt like he inhaled it. The turn around was a cone with a hair pin turn which slowed me down quite a bit and I also slowed to drink my water. I started picking up the pace once I got my momentum back and Jeremy told me to get after it and continued to cheer for me as I passed the 2 guys who had been running in front of us. At one point we crossed a road where there was no police officer stopping traffic. I looked over and saw a car coming so I held my hand up for them to stop and they did. I was a little disappointed my 4th mile split was 7:22 but I knew the turn and the water stop had slowed me down quite a bit. I was still feeling really strong and was really pleased with how good I was feeling especially considering how rough I felt during this same race back in August. I started really looking forward to the 5k turn around because I knew there would be more water there and then I'd have about a mile and a half to go. I sped up even more than I realized and went through mile 5 in 7:03. When I hit the 5k turnaround I was prepared to have a lot of difficulty moving through the 5k runners on the course but didn't have much trouble at all. It was a pleasant surprise. It seemed like there were fewer walkers than usual and those who were walking weren't taking up the entire trail as they often have in the past. I did have to go all the way over to the other side of the trail to pass but never had to slow down and wait for a break to pass. When I saw I had run mile 5 in 7:03 I decided to push to break 7 for the last mile. I normally don't notice too much that the last mile of the race has a gradual but long hill for a large portion of it, but I noticed this time. My legs were starting to burn and I was struggling to keep my pace under 7:20. I just kept pushing as much as I could and finished out mile 6 in 7:13. I was able to run the last portion of the race in 6:58 pace which put me finishing in 45:22, an average of 7:16 per mile. I was excited when I looked it up later and saw I had finished the Blue Moon 10k in August in 7:16 pace as well so I'm on track to beat my Route 66 Half-Marathon time from the fall! Not too shabby for my 1st tempo run of the training block, although I ran the Joplin Memorial Marathon Relay leg as a semi-tempo run. 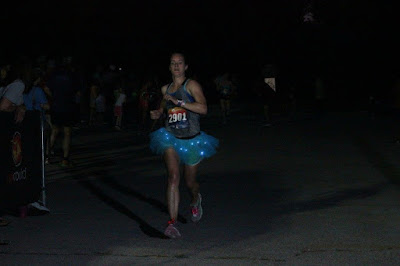 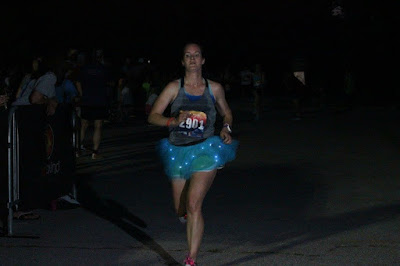 After I finished the race I expected to see Jeremy finish shortly after me because I knew he had been close behind me after the turn around. I grabbed a water and watched for him to finish but he never came and then I started to see people coming through who I knew we'd had a huge lead on at the turn around. I started to wonder if he missed the turn around and then realized that couldn't be since he'd turned around with me. I asked dad and Thomas if they'd seen him finish and they hadn't so I took off for my cool down back onto the course to look for him. Dad said Jeremy was running in all black so maybe we just missed him. I made it a quarter mile out on the course and still hadn't seen him so I headed back to the finishing area because I knew at that point I had definitely missed him. Thomas said they still hadn't found him. At that point I started to panic a little bit. My mind flashed back to crossing the road where no one was stopping traffic and I started to worry Jeremy had been hit by a car. While I was heading back out on the course I heard the announcer calling for the family of David Harper. I wondered if possibly they could be pronouncing dad's name wrong so I turned back around and that's when I heard him correct himself to Hurford.

I was near tears knowing that something had happened to Jeremy and not knowing what it was. Thomas came racing up to me and told me to come with him. As we were running to the car it was relayed to me that Jeremy had a seizure out on the course and was being transported to the hospital. Ty told me to go with my family and he'd follow with the kids in our car. We had no idea what having a seizure would mean for Jeremy's brain post-TBI. We rushed to the hospital only to find upon arrival that Jeremy was not there. We called all the hospitals in the surrounding area and he wasn't there either. One of the hospitals said there had been a call out for an ambulance but no ambulance had arrived. They said we may have just beat the ambulance to the hospital so we waited and we waited and we waited. Ty arrived with the kids and we waited some more, still having no idea what was going on. Finally Ty got a phone call from the race director on his phone who said Jeremy was at the race. When the ambulance arrived he was stable so he declined services and was driven back to the start/finish area where he was looking for all of us. Once we found out more we were so thankful that the woman running near Jeremy when he fell was an ER nurse. She saw him fall down off the side of the trail into the wooded area about 15-20 feet below. When she went down after him she found him laying on his face having a grand mal seizure. She stayed with him for 45 minutes while others ran for help and the ambulance drove down the trail to get to him. It was a terrifying experience for all of us. I felt a lot of guilt that I had run ahead and not stayed with Jeremy initially, but when I found out he had the help of an ER nurse I knew there was nothing I could have done had I been there.

We missed awards since we were at the hospital but had almost all won awards. I was third out of 76 overall, first out of 38 females, and 1st in my age group in the 10k. Jeremy had been 6th overall before he fell. Thomas finished 1st in his age group and 18th out of 285 overall in the 5k with a time of 23:16. Dad was also 1st in his age group with a time of 23:58 and was 23rd overall. Ty finished 10th in his age group and 67th overall, running 28:16 while pushing the double stroller. Mom was 2nd in her age group and 146th overall, finishing in 33:54. Carter went out to run her in to the finish which she really enjoyed. Jeremy's seizure put a damper on the evening and we are awaiting an appointment with his doctor to see where we go from here. He is more prone to have seizures since he had a TBI but hasn't had one in the past 1.5 years since his accident until now. We feel it was likely brought on by dehydration and becoming overheated. It is possible that his brain will have more difficulty regulating his temperature now. We are hopeful this was a one time thing and he won't have to experience that again. He left the race with scratches on his back, arms, and head from falling and said he had a headache like he had been punched in the head. We appreciate all the support we've received since Jeremy's accident and appreciate any positive thoughts and/or prayers you can send his way!

Posted by Liz Runningmomma at 1:55 PM