Every summer we do a series of races in a town about 45 minutes from my parents' house. They are evening runs and there is one per month in June, July, and August. The races start with a fun run at dusk and then it starts getting pretty dark by the finish of the 5k and 10k. They do a great job to make the races a lot of fun with an ice cream truck at the finish line and light up arches along the course along with glow sticks to wear. When my mom was signing everyone up she asked if Carter and Elise would like to do the fun run. Carter was really excited and said he wanted to run it. I wasn't sure about Elise since we tried signing Carter up when he was her age and he mostly wanted to be carried the whole way. But then Elise started wanting to run on the trails all the time and even ran an entire mile with no walking, only taking short little breaks while standing to catch her breath. So my mom decided to sign Carter up for the entire series and just sign Elise up for the first race. If she enjoyed it then my mom would sign her up for the rest of the races. I was really excited for Elise to run her first race because I knew she would enjoy it. Carter was super excited about it and in the weeks leading up to the first race, The Starry Night, he was telling all his friends about how his Oma signed him up for three races and Elise was signed up for the first one and if she liked it she could do all of them. I'm pretty sure all of his friends knew all the details, including the fact that he would get ice cream after the race! 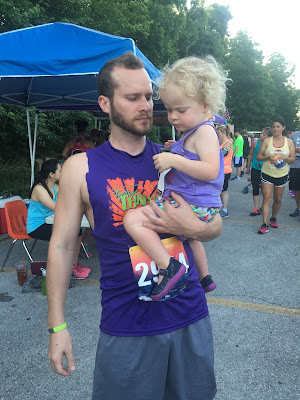 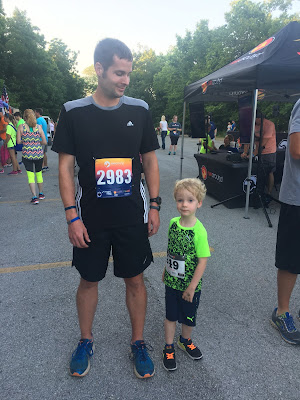 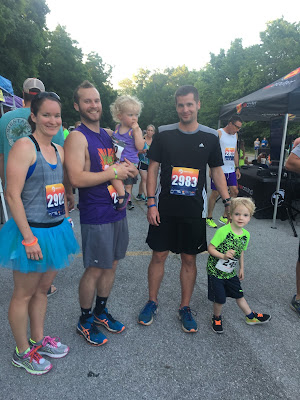 In the car on the way there Carter kept talking about how he was going to run with the best runner, Oma. He said he didn't want to end up by himself and get lonely. We arrived with plenty of time and got the kids outfitted with their fun run bibs and some glow bracelets. When it was time to head to the start corral Carter held my hand and Elise wanted Oma to carry her. As they were counting down for the start Carter asked me if it was okay if he got away from me and mixed up with everyone else. I told him no matter what I would find him. They started the race with the announcer yelling, "Go," which was perfect because Carter gets scared when they use a starting gun. He took off sprinting and I ran along behind him. Elise started running but got scared and wanted Oma to carry her for a bit. Once things thinned out and there weren't so many people around her she wanted down to run and ran the entire rest of the time. Carter took off pretty fast but then about 100 meters into the race he settled into a good pace and did a great job pacing himself. At one point a little girl was running by us alone so I asked her what her name was and Carter started talking to her. After that he wanted to run with her and when she walked, he walked to stay with her. She stopped to walk twice and he decided he didn't want to walk anymore so we left her behind. 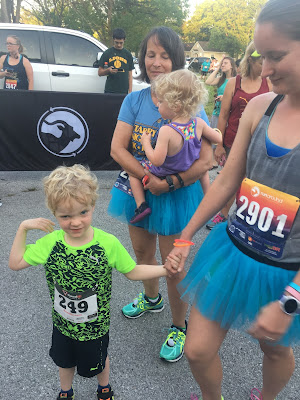 The race was a half mile out and a half mile back with a cone at the turn around. Once we made it to the turn around I told Carter we were going to see Elise and we could cheer for her. He was so excited to see her and Oma at the back of the pack running along. Oma said once Elise saw us she wanted to turn around so they went ahead and turned around early since it was just a fun run and mom wanted it to be fun for Elise. We could see a couple of girls running ahead of us and Carter told me, "Let's see if we can catch up to those girls. I like girls." It was cute. Then we passed a group of 4 older boys and Carter said he wanted to stay ahead of them. One of the boys passed us back and Carter said, "That's okay because he's a really big boy. Let's stay ahead of the other ones though." The older boy was probably a least 7 years old so Carter was right, he was quite a bit older. Then as we were finishing one of the other boys caught up to Carter and started to pass him. Carter looked over at him and sprinted past him to the finish. I was surprised he pushed to beat the other boy since he had been just having fun the whole race and not taking it too seriously, but I guess he has a competitive streak deep down like his momma! I had started my Garmin just so I'd have his time and so I'd remember I ran a warm up before my race and was super impressed that Carter finished the mile in 11:12. I told him he ran a faster mile than his daddy's first mile when I started running with him about 6 years ago. Back then Ty finished his first mile without walking in 12 minutes. Carter could definitely have run faster if he hadn't started running with the girl we met which turned into a couple of walk breaks. I'm interested to see what he does in July. 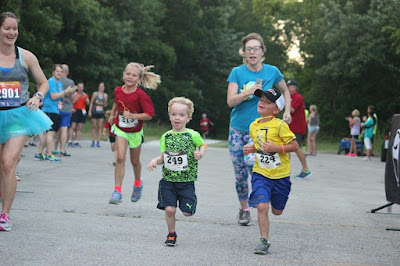 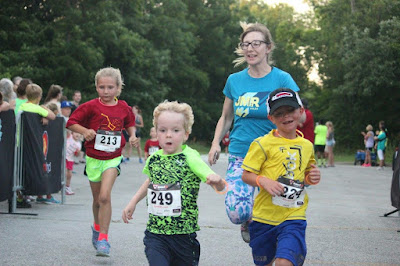 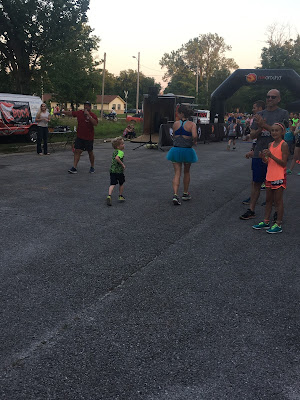 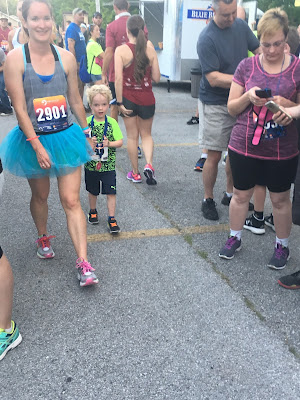 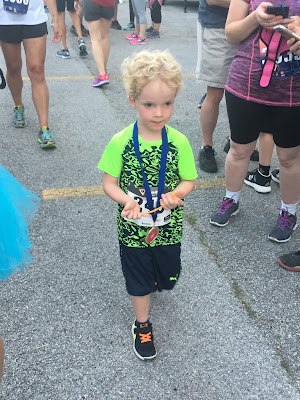 I took Carter over to get an ice cream after they gave him a finisher's medal and then we headed over to watch Elise finish. I was shocked Elise was already finishing in around 14:30 and it made more sense when mom told me they had turned around early. Coming onto the parking lot from the gravel path Elise's bracelet fell off so she turned around and went back to pick it up. The announcer loved that and said she must've found a pretty rock because from where he was you couldn't see what she was picking up. When Elise saw me she bee lined it to me so I helped run her to the finish line and Carter was excited to see her so he ran her all the way across the finish line. Everyone was so impressed such a little girl had completed the race and the announcer referred to her as an 18 incher which was funny! She headed right over to get some ice cream too. I think we're going to have to get her signed up for the rest of the race series! The mile fun run was the most enjoyable race warm-up I've ever run and I'm so glad I got to share in this experience with Carter! 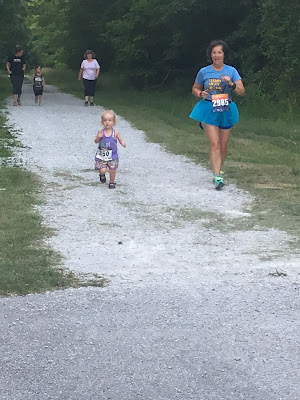 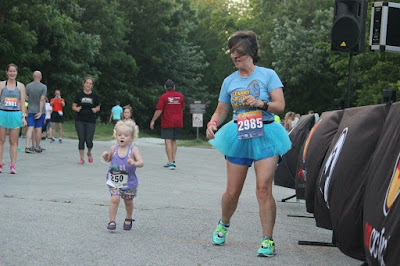 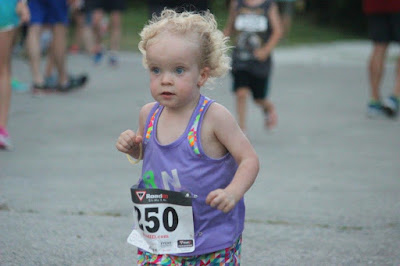 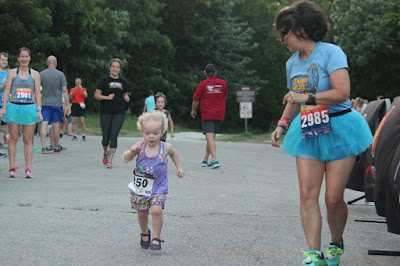 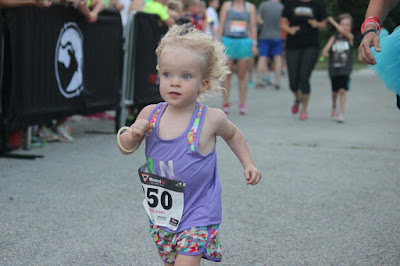 Posted by Liz Runningmomma at 3:09 PM