It seems like I just sent Carter off to his first day of school, worrying and waiting until I could go pick him up. But when I look back at the pictures from his first day of school, here, he looks like such a baby! I went from nervous to drop him off to nervous that I would get a call he hadn't kept his hands, feet, or objects to himself to calm and happy while he was at school. What a wonderful year it has been! Carter absolutely loved his teachers, Ms. Joan and Ms. Miranda, and they were wonderful with him. They along with the school director met with us and worked with us to help Carter with his behavior after a rocky start to the school year and after we met it was smooth sailing. After at least one incident a week during the first few months of school we went to two minor incidents from December on (one was pushing and the other was tugging with a toy he and another child wanted while the earlier incidents had been hitting or kicking)! I am so thankful we chose such a wonderful school where they were willing to work with Carter and I am so thankful he had such a successful year! I am so glad to have him home with us over the summer but I also look forward to all the growing and learning that will occur next school year.  He will be in official prek next year. He will move up to the prek class at the same school he goes to now. He will be going three days a week from 9:30-2:30 which will be a nice transition from two half days into what will be full-day kindergarten the following year. 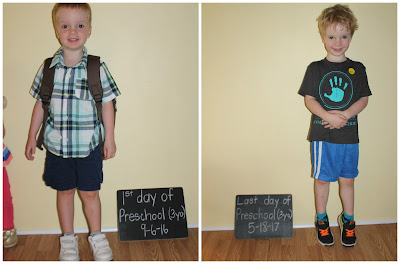 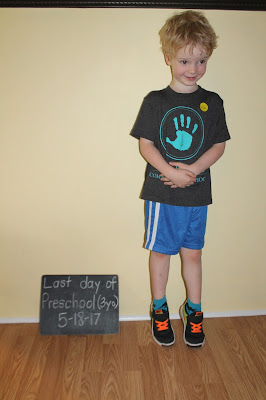 On his last day of school they had field day. I forgot to take pictures until we got home so his hair is a mess but he's wearing his sticker for having a good day! Carter was so excited about field day that he wanted to wear sunglasses for the occasion. He brought home a medal after completing all the activities and was super sweaty when I picked him up! His sweet teachers gave him a little bag of Starbursts with a note that said "We hope your summer is bursting with fun!" They also let him take home his star from the helper chart and his nametag from his cubby. But the best present of all was a little photo book they put together with pictures throughout the year. They had taken a picture on the first day of school, during special activities, with each of his teachers, at the Dad's Sack Supper, and at the Mother's Day tea, along with a picture during the last week of school. I absolutely love it and Carter was so excited, flipping through the pages and telling me all about what they were doing in each picture and elaborating on the activities that they were engaged in during the time. I love seeing Carter grow and develop as he interacts and learns at school. Now I understand why parents in my class would cry on the last day of school. It's hard to imagine Carter moving on to different teachers next year because I have loved his teachers so much, but I'm sure they will be just as wonderful!