I mentioned in Elise's update here that she was inconsistently climbing out of her crib. We hadn't changed Elise's crib into a toddler bed yet because she only climbed out every once in a while but at the end of April it became a fairly constant thing. She'd even climb in and out of her crib just to jump on her mattress. Then I went to get her when she woke up from her nap and she was standing at the door waiting for me so we decided it was time. We waited until the weekend so Ty wouldn't be rushed trying to change her bed over after work so it would be ready at bedtime. Elise spent the first night in her big girl bed on May 6th. She has always been such a good sleeper and we were hopeful that would continue in a toddler bed, but we weren't super optimistic as the transition wasn't exactly smooth sailing with Carter. Read about his transition to a big boy bed here. Thankfully with Elise it was a breeze!
We really talked it up with Elise and told her what a big girl she was that she got to sleep in a big girl bed. She was pretty excited about it. I think it helped that it was the same bed, just different siding and she was still in the same room. We laid her down in bed and both sat waiting for the crying to start. We were both surprised that she was totally quiet. She did get out of bed and open her door and we took her back to bed. Then we watched on the monitor as she laid in bed still awake with her eyes open but didn't cry or get back out of bed. We were shocked! We weren't sure how she would do overnight, whether she'd wake in the middle of the night or not. Carter started waking in the middle of the night again after we moved him to a toddler bed. Elise slept all through the night and woke the next morning bright and early at 6:00 am! She's waking up much earlier since we moved her to a toddler bed. She went from waking between 7:00 and 7:30 to waking by 6:00 or 6:30 every morning. Ty thinks maybe she was waking up before but since it was a lot of work to climb out of bed, she'd just lay there and then fall back to sleep. Since she's waking earlier she gets really tired before naptime and is sometimes a little cranky but other than that we've had no changes with her sleeping.

Elise occasionally wakes up and goes into Carter's room. One night we heard Carter yelling a little while after we put him in bed and thought Harper had gotten out of his room. When Ty went to investigate, he found Elise in Carter's room. Carter was telling her to leave his room and go back to bed. When she wakes up she doesn't cry out or anything she just gets out of bed. I usually hear her door open and she comes into our room right away. Sometimes she yells out for me from the hallway and I go get her. We decided not to make it a rule she had to stay in bed and wait for someone to get her like we did with Carter because she doesn't get out of bed except when she wakes up. He would get up randomly throughout the night. She also almost always comes straight to our room and she can't unlock doors yet so there's no danger of her leaving the house and she doesn't get into mischief when she's the only one awake so it works out better for her to quietly leave her room without waking Carter rather than yelling out for us and waking Carter. 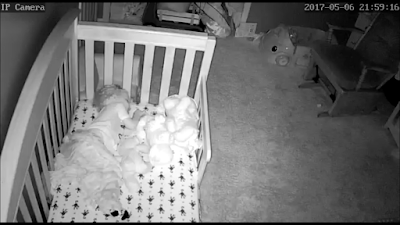 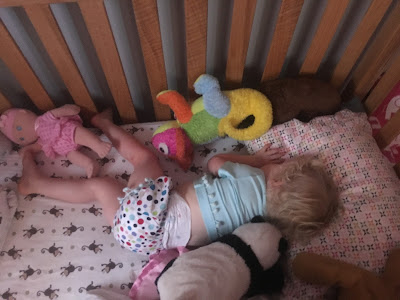 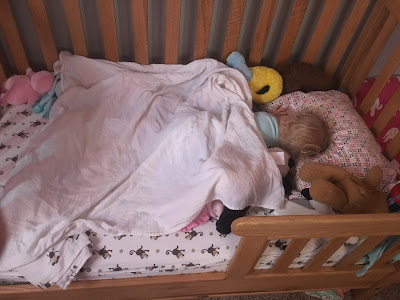 She does wonderfully at naptime as well. Naptime is actually even better than bedtime. Since she's been waking up earlier and is super tired by naptime she typically falls asleep while I'm rocking her. So I lay her down and she doesn't get up until 2-3 hours later when she's done napping. Most nights she gets up once and we have to walk her back to bed. On especially difficult nights she may get up 3-4 times. Once we get stern with her she stays in bed and will lay quietly even though she's not asleep. She asks for water now so we let her have a sippy of water in bed. She also asks for any missing buddies so we have to find them before she'll stay in bed, but she did that when she was in a crib as well. 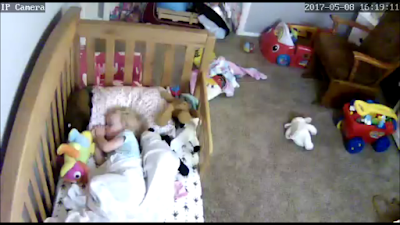 It amazes me how much easier pretty much every transition has been with Elise than it was with Carter. I'd love to say it is because we are experienced and know what we are doing better but it honestly just comes down to her being an easier child. She transitions easier and rolls with changes better than he did. She was a better sleeper from the get-go so that also helps. Ty and I have agreed we are so glad Carter was our first child. If we'd had Elise first we would have thought we were amazing parents and had everything figured out. Then Carter would have come along and thrown us for a total loop. Now we can do all the things we tried with Carter and actually have success and know that it wasn't that we were screwing things up, it was just that he was different and needed to do things in his own way. I love both my kids so much and I'm so glad I've gotten to do this two different ways and see how every child is just so different. I wouldn't have it any other way! I love the challenges that come with parenting children with different personalities! 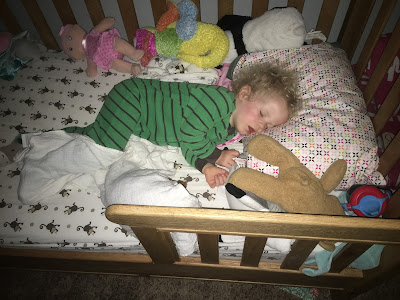 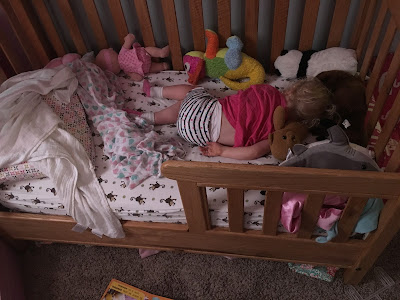 Posted by Liz Runningmomma at 1:08 PM