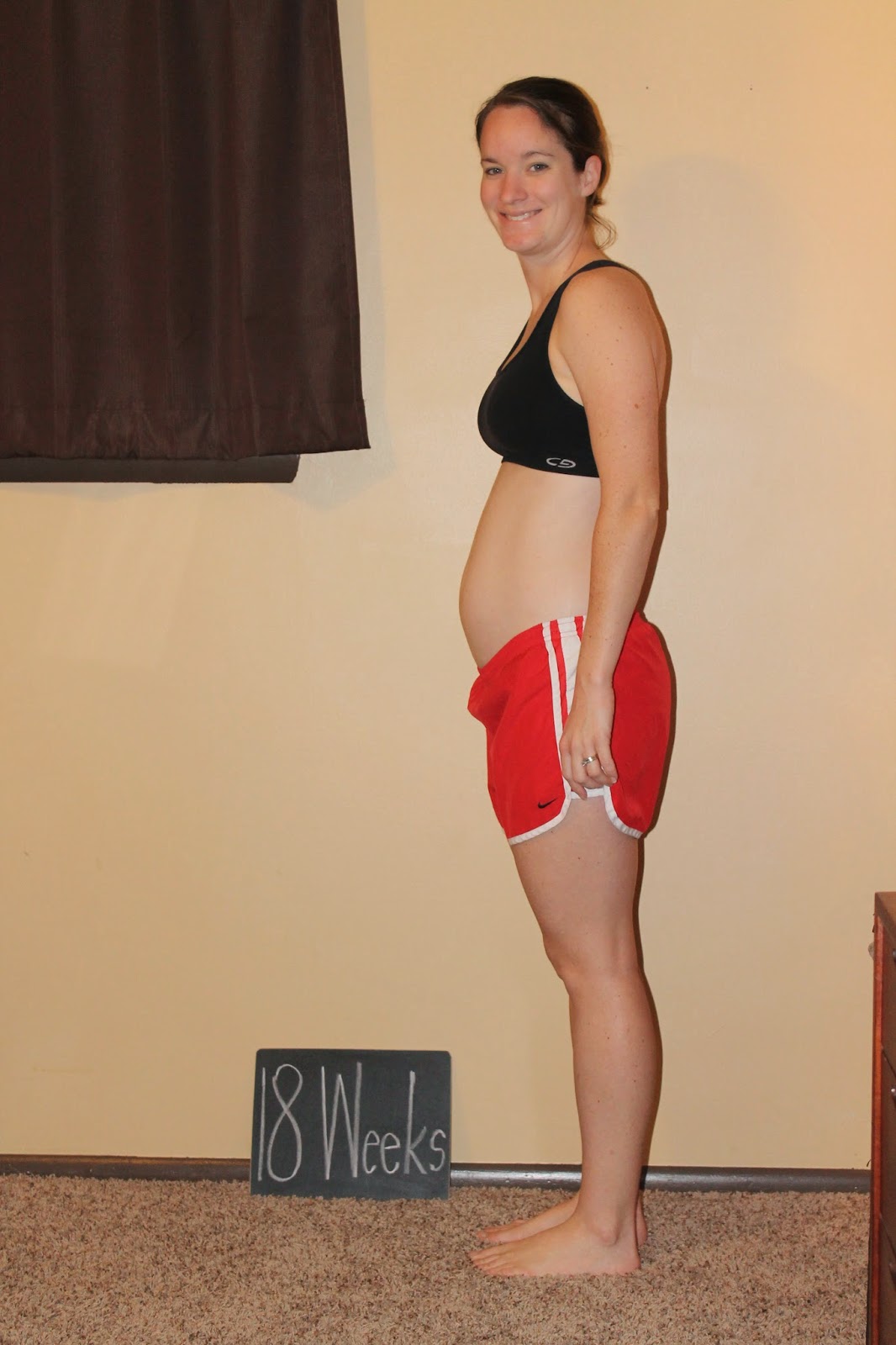 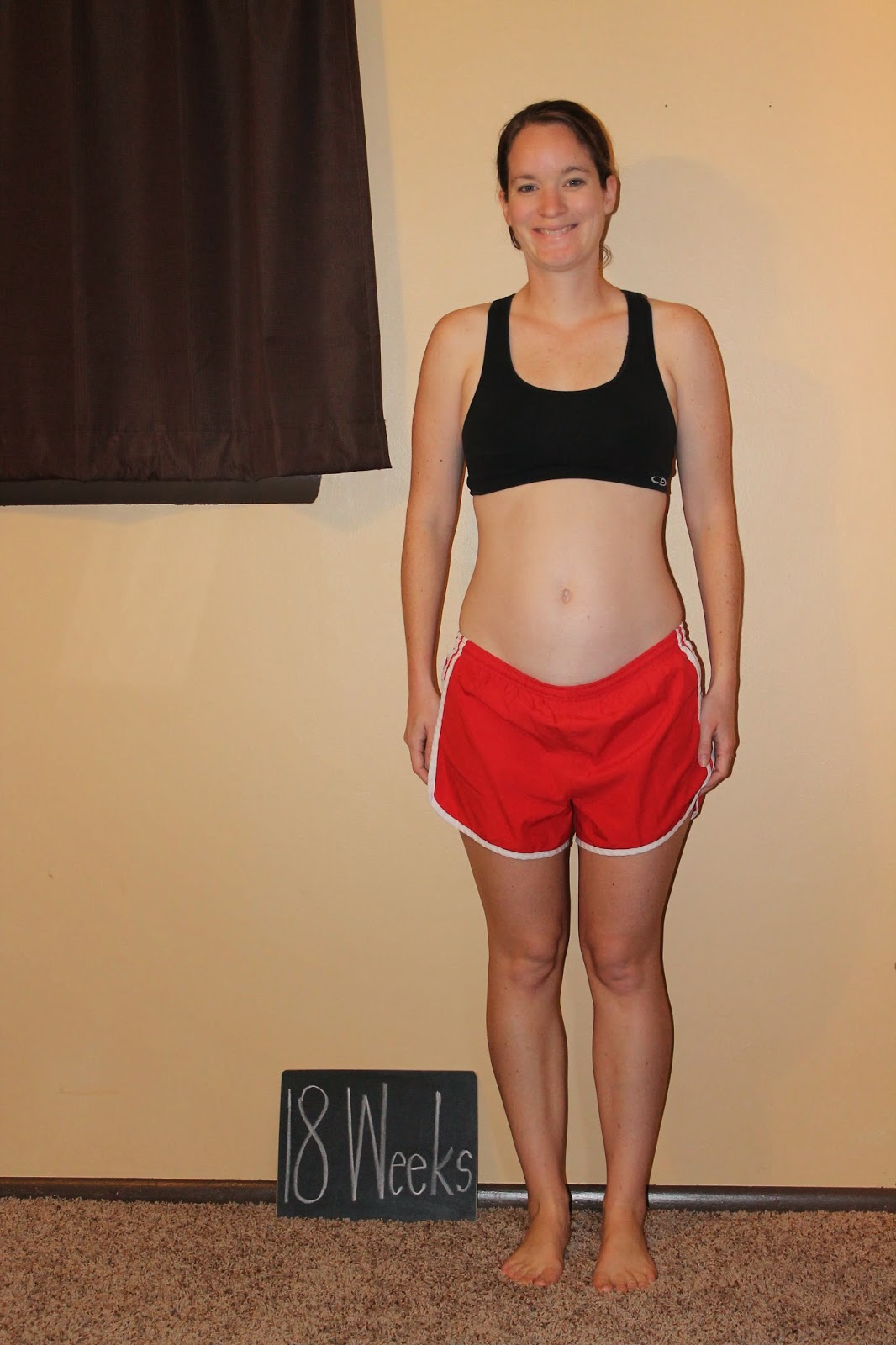 Baby's Size: Baby is the size of a sweet potato, about 5.5 inches long.  She's working on her muscles and moving around quite a bit.

Weight Gain: Up 5 pounds from my starting weight so I gained another pound last week!

Maternity Clothes: I finally broke down and bought a pair of maternity jeans that fit.  When I was pregnant with Carter I bought a pair of jeans a size bigger than what I normally wear because I'd read online that's what you should do.  I tried wearing them again this time and they annoyed me so much because they kept sliding down my backside.  I remember being irritated by them the entire time I was pregnant with Carter and even at the end of the pregnancy they still didn't fit.  Last time since I was working I wore dress pants daily and very rarely wore my jeans since they didn't fit.  I know I'll be wearing jeans a lot more now since I'm at home, so I bucked up and used a Target gift card to buy the jeans.  When we got home I took off my jeans being held together with a hair tie and I instantly became less crabby.  I hadn't realized how irritated I was by the constant pressure caused by my pants being so tight on my uterus!  I'm starting to look pregnant even in t-shirts.

Sleep: I was so exhausted again this week!  I've been waking up 3-4 times to go to the restroom most nights.  The body pillow has kept me from sleeping on my stomach which has been helpful.  I've also been taking a 30 minute nap most days.  On Saturday Ty got up with Carter for me and I slept until 10 am!!!!

Symptoms: My back has been sore and I've bumped my planks up to 40 seconds rather than 30 seconds.  I've been tired and my belly occasionally gets sore and feels like it's stretching.  I'm still having dry heaves but they are infrequent.  They occur most frequently when I'm brushing my teeth, sometimes they happen when I'm running or randomly at the end of the day.  I just noticed last night that my belly button is raising up some, definitely no where near popping out, but it's noticeably different.

Running: This week was much better than last week.  My weekly mileage was 16 miles.  We ran a 5k on Sunday and it was ridiculously windy.  The gusts were up to 30-40 mph and we ran half the race into the wind.  I was pleased that with the intensity of the wind I only ran about 50 seconds slower than the week before, finishing in 24:56.  I was the 2nd overall female and the 7th finisher.  I felt much better during the race than I had at the Twilight Thriller as well.

Food Cravings: Pretty much anything.  I'm constantly hungry.  Having candy around from Halloween has proven to be very tempting to me.  It's so hard when I'm tired and hungry and just want to grab something to eat without preparing anything.  The candy is just right there calling my name.

Movement: Baby girl is a mover!  I feel her multiple times every day!  Carter's movements were infrequent in the beginning.  I'd feel him and then not again for a few days.  Sister is moving daily with quite a bit of strength!

Best Moment of the Week: Watching Carter trick or treat was so much fun!  I also loved playing musical pumpkins with him.  He would get so excited to run around the circle and I was laughing so hard!  It was also really exciting to get some girl clothes for baby girl.  I had a gift card to Kohl's and we found some adorable little girl outfits on clearance.  One was $1.20, one was $2.40, and one was $3.40.  Then I got 2 onesies at buy one, get one free.  Little girl outfits are the absolute cutest!

Currently Loving: That I'm getting a noticeable belly.  I can't help but look down at my belly when I walk.  I smile so big knowing sweet baby girl is moving around in there.  I'm also absolutely loving all the movement I'm feeling.

Miss Anything: Every once in a while when I'm running at the trail and a fast girl runs past me, I miss being fast and doing speedy runs.  But most the time I love the challenge of running pregnant.

What Big Brother is Up to This Week: Carter man had so much fun with Halloween and trick or treating.  At the 5k we ran this weekend he and Ty won another costume contest with their train stroller and engineer costumes.  He's been all about running and loves to do races down the hall.  The time change threw his sleep off a little bit and he took a 3.5 hour nap on Monday!  Carter was jumping on the bed yelling, "No, Bobo!" during picture time so when we got him into the picture he was only interested in rolling around on the floor.  He is hilarious!  My Week 18 Bumpdate with Carter. 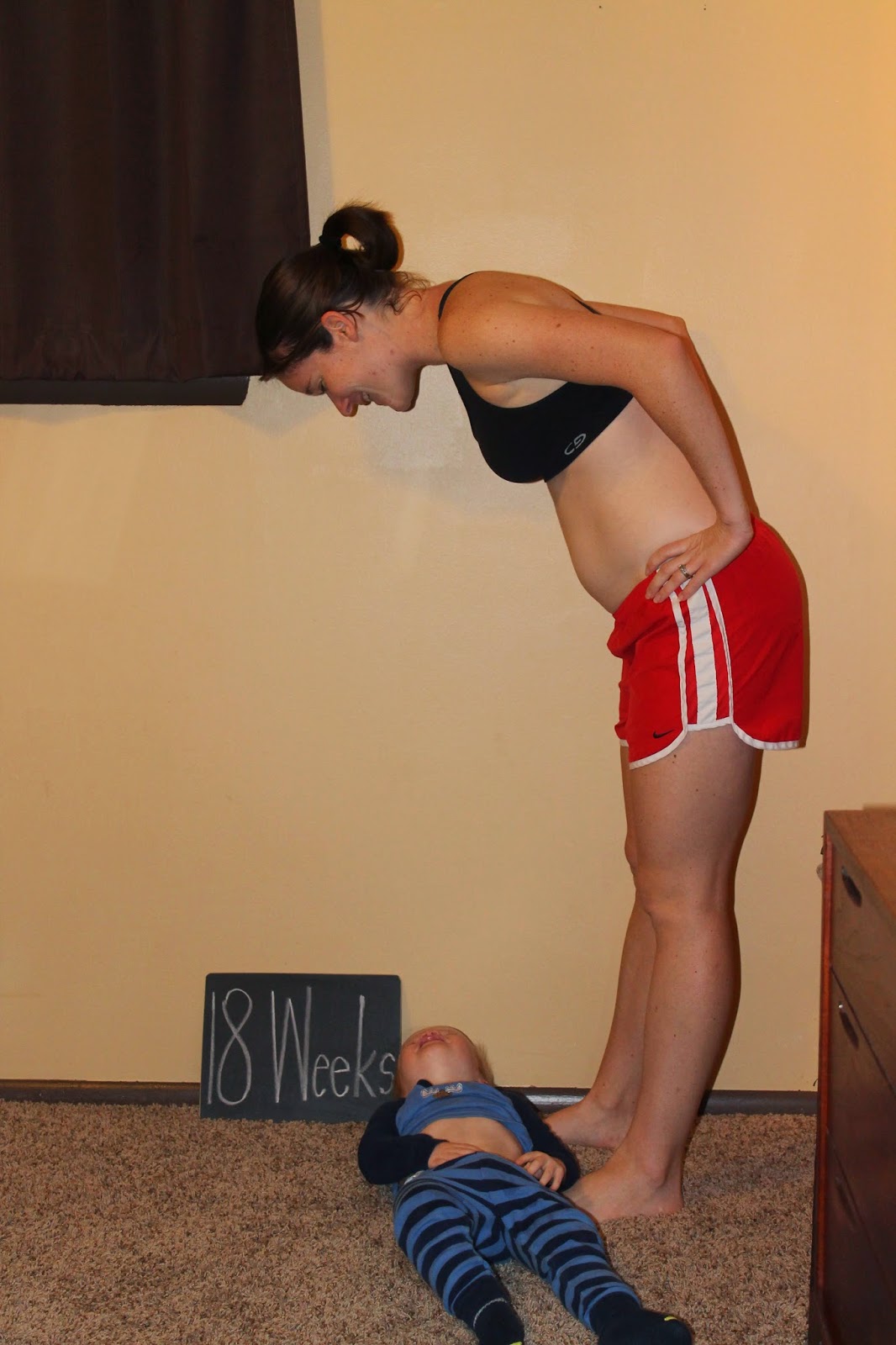 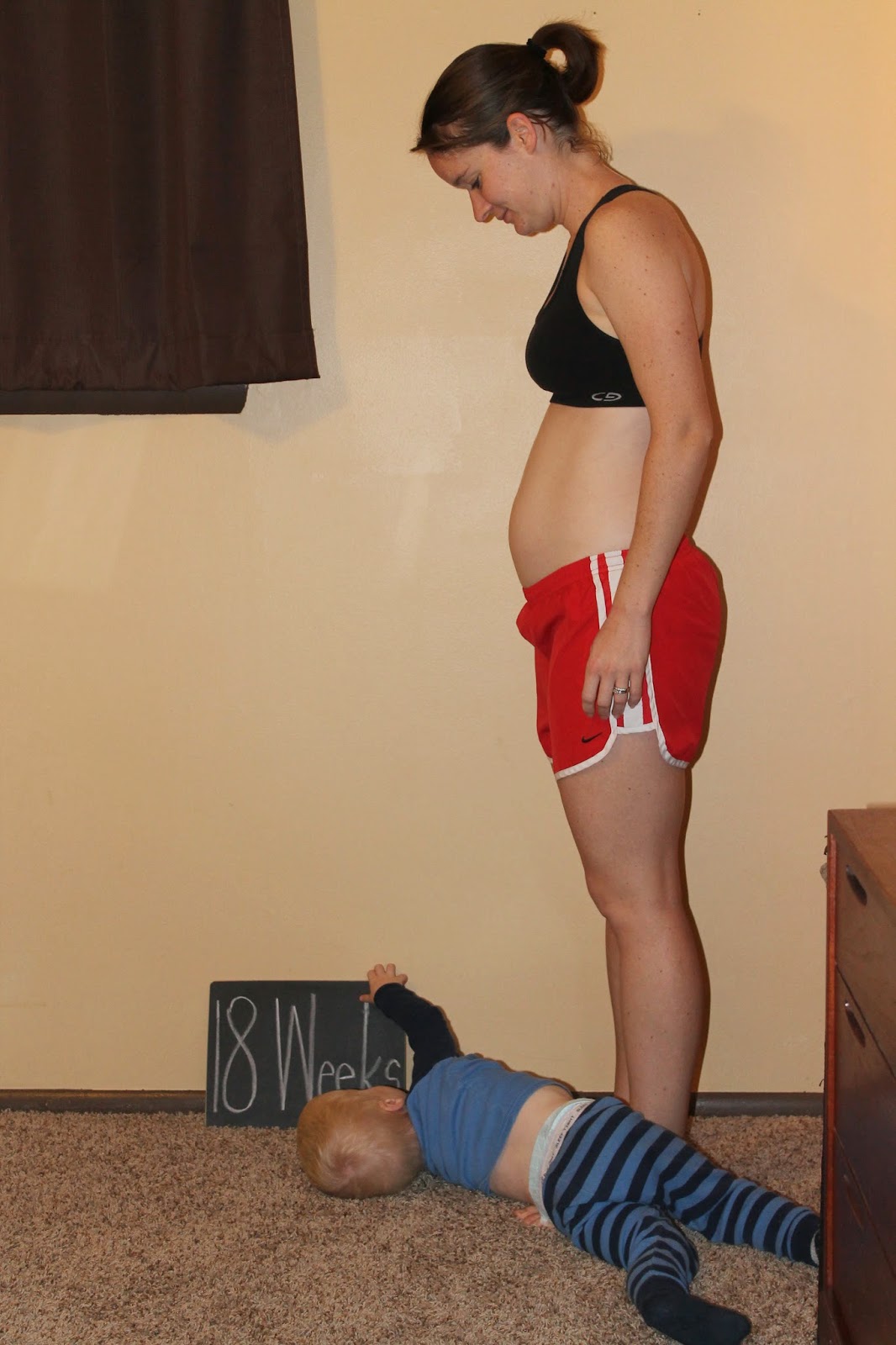 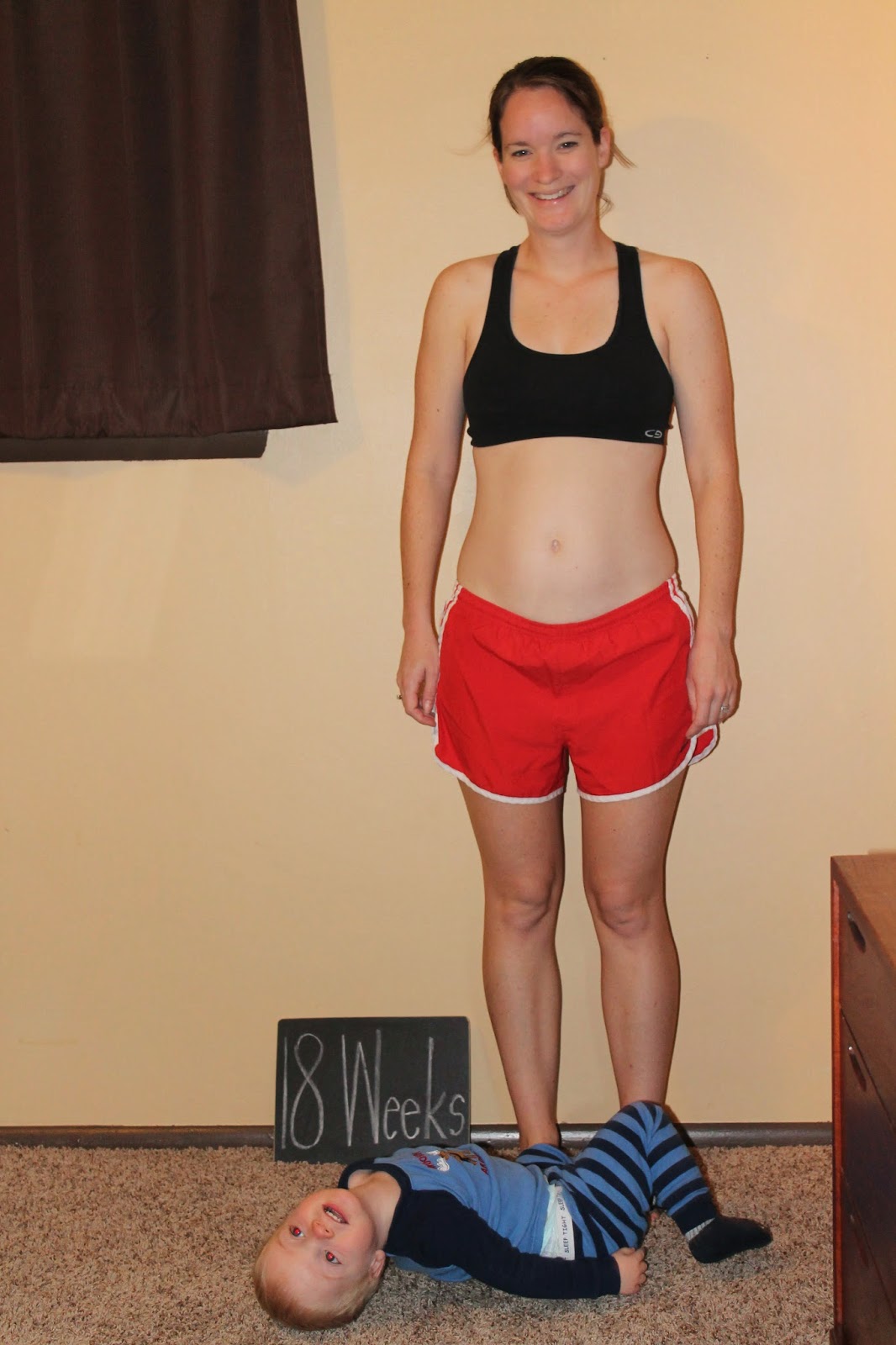 Posted by Liz Runningmomma at 11:15 AM