The Day of Birthday Parties

About a month ago Jake's mom tucked an invitation to his first birthday party into his bag for Carter.  I was so excited!  It was Carter's first friend birthday party and I was quick to RSVP yes!  Then a few days later we got an invitation to Carter's buddy, Landon's, birthday party.  I was so excited, it was Carter's 2nd friend birthday party invitation.  Then I looked at the date and realized it was the same day as Jake's party.  Jake's party started at 4pm and Landon's party started at 6pm, so Ty and I decided we could go to both parties and I went ahead and RSVP'd to both parties.  Saturday was the day of the birthday parties and Carter had an absolute blast!  To add to all the excitement Ty's parents came to visit for the weekend and Carter played all day with them before the party.  He went down for his nap a little bit late and slept all the way until 3:45.  We had a 20 minute drive to Jake's house so we were about 5 minutes late, but arrived at the same time as a few other guests.


Jake's party had an Up theme with balloons and lots of rainbow.  There was a hot chocolate bar, rainbow layered Jell-O, red Oreos, M&M's, and sprinkle cupcakes.  When we entered the party Carter was immediately interested in the Oreos and I let him have one.  Then he was off to play with Jake and his cousin, Andrew.  Carter ended up really enjoying Andrew and followed him around, saying "Dew, Dew!"  He's a couple months older than Carter and I'm thinking playdates should be in our near future.  Carter was also quick to find Adam or "Addy" as he calls him and wanted to play with him and the big kids so he ended up watching them play.  Jake opened presents and then dug into his cake.  He was hilarious and absolutely loved his cake!  He got excited at one point and swung his arms around getting cake all over the floor and the base board.  After Jake was done with his cake his mom took him to rinse off in the sink and I got Carter a cupcake which he wanted to sit and eat with the big kids.  He cracked me up just eating the icing off the top of the cupcake. 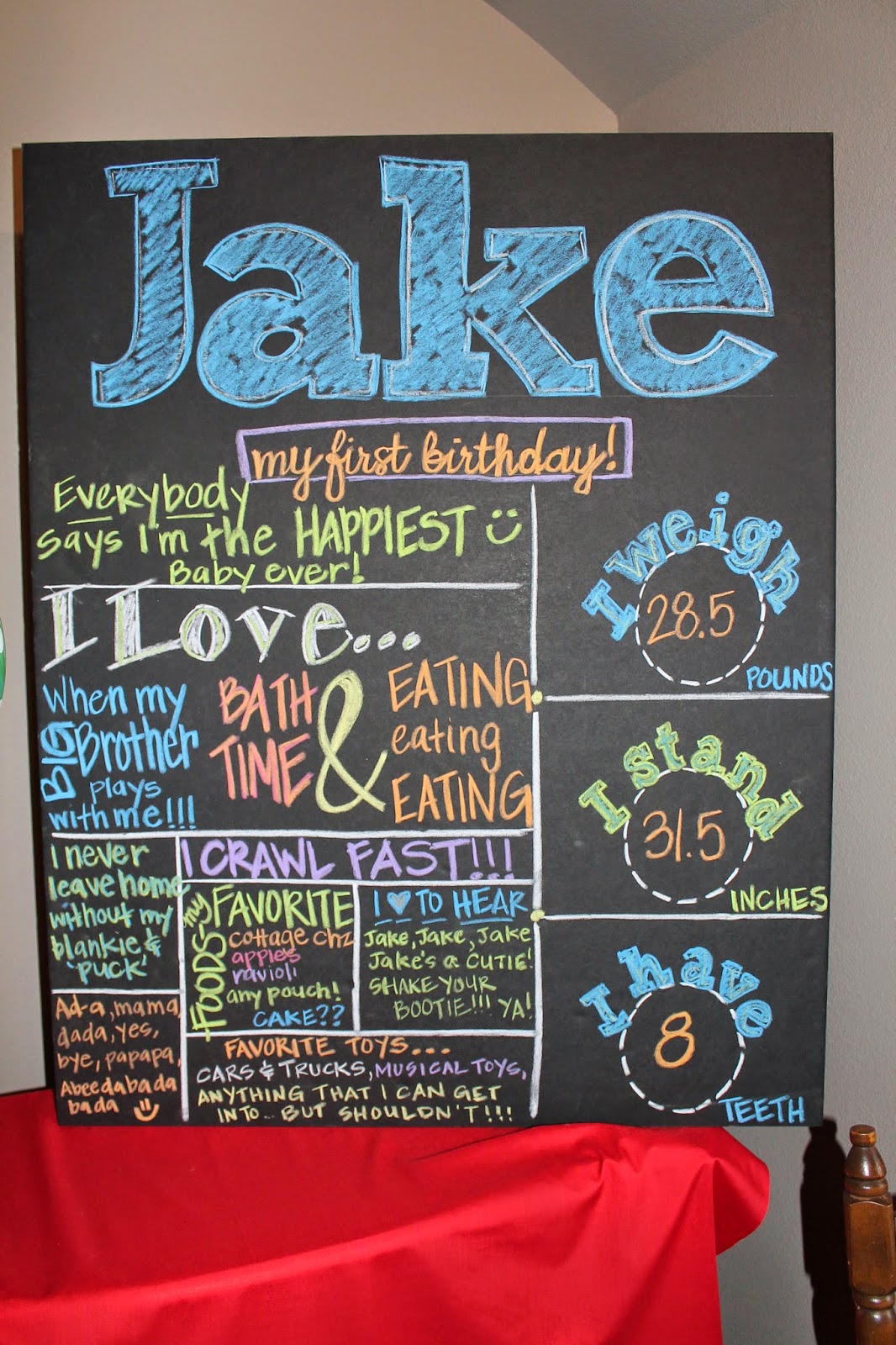 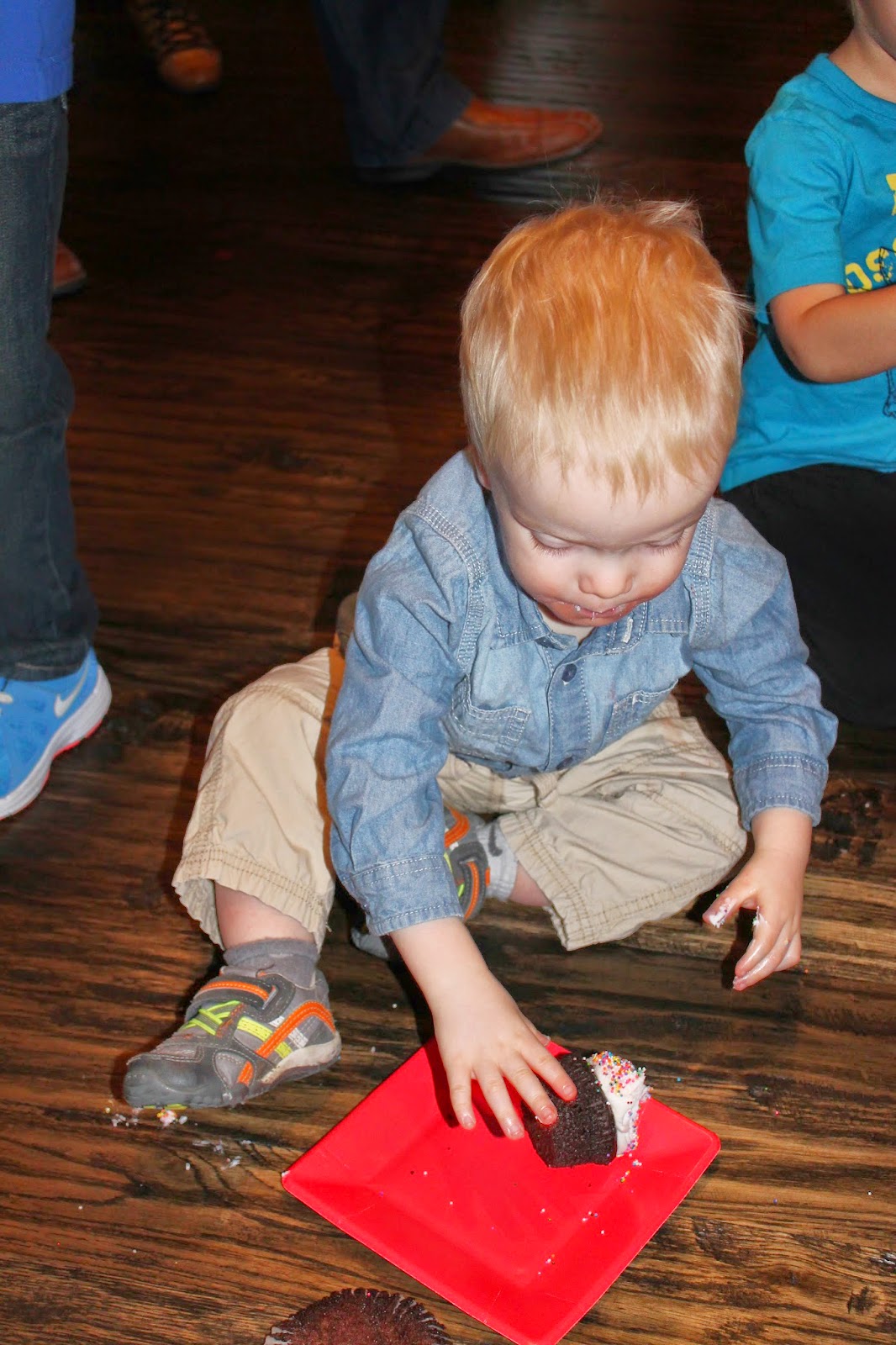 During the hour and a half we were at Jake's party Carter pooped twice and I ran out of diapers.  On the way to Landon's party I was silently praying that Carter didn't poop again at Landon's house.  I normally have a back up stash of diapers in my car, but we had run out of diapers and used the ones in my car.  When we bought more diapers I forgot to replace my car stash.  When we entered Landon's party all the kids were playing.  There was a train table out and Carter headed straight for it.  They began serving pizza shortly after we arrived.  Carter didn't want to eat because he was loving the train table so much.  Finally I was able to get him to head over to eat.  They had a bench for the kids to sit on and Carter very happily sat with the other kids to eat.  I turned to get a piece of pizza for myself while Carter was eating and while I did he slid off the bench and hit his head on the floor.  The poor little guy just cried and cried.  Landon's mom got me an ice pack and I rocked him for a while and then he was off to play some more.  They also had a single person trampoline and Carter couldn't get enough of it!  He bounced until he was out of breath which was so funny to watch! 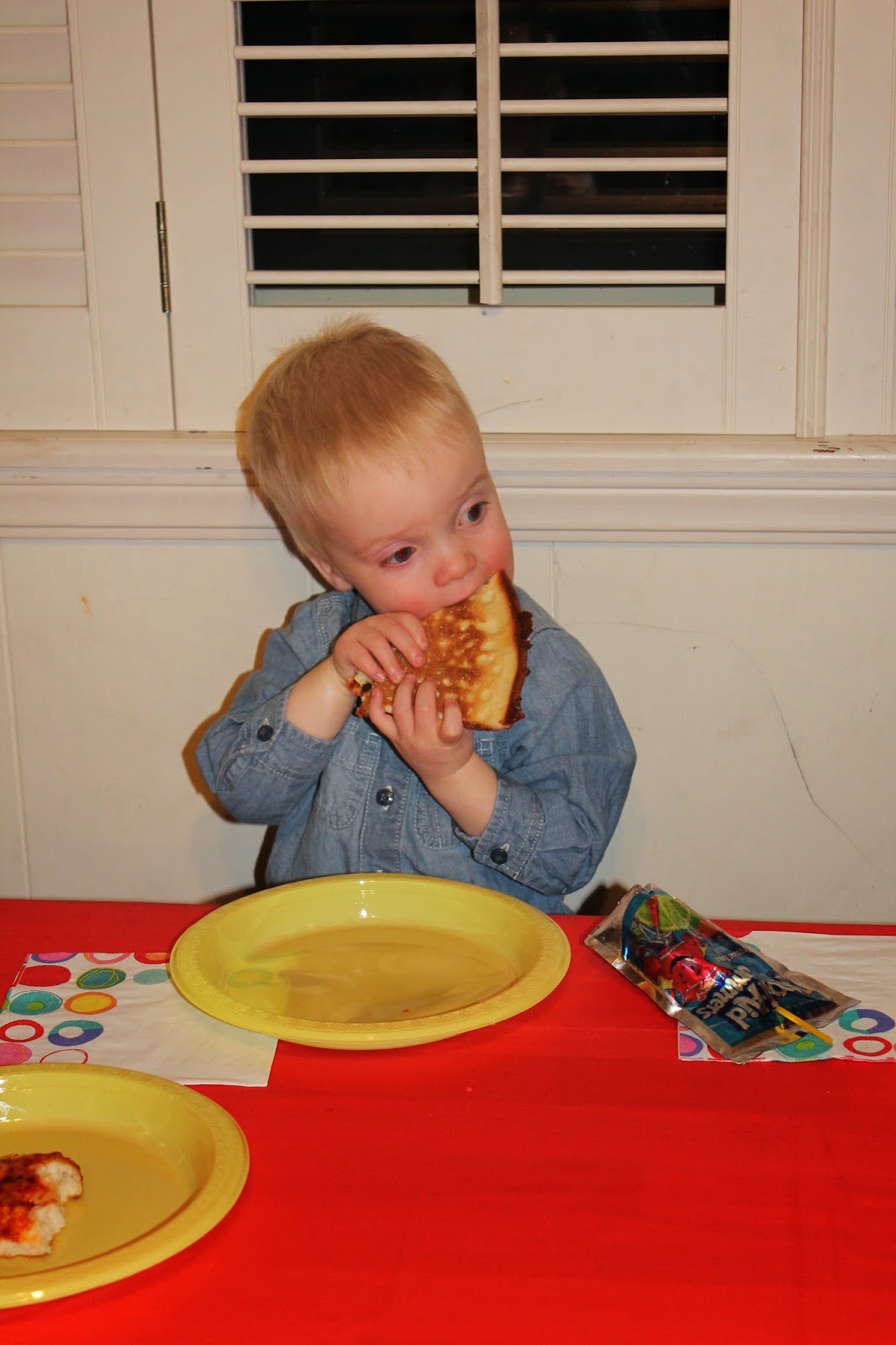 When it was time for cake I decided Carter and I would share a piece since we'd already had cupcakes at Jake's party.  The cake was covered in fondant and Carter reached down and peeled the fondant off.  He ate 2 bites of cake and the fondant and he was content.  I couldn't believe he liked the fondant!  After cake Landon opened his presents and then the kids pulled ribbon out of a pinata until it broke.  Carter was afraid to walk into the group of kids to get candy and just stood on the outskirts watching.  Sweet Landon noticed Carter just standing there and handed him a few pieces.  It was the cutest.  Once the candy was all picked up Carter walked over and laid down on the floor.  I looked and it was 7:45 so I decided we should head home.  We helped clean up all the toys and as we were getting ready to head home I noticed Carter had a dirty diaper again!  Landon's mom let us have one of his Pull-Ups so Carter wouldn't have to ride home in a diaper full of poop.

On the way home I thought Carter might fall asleep, but he sat in the back singing Baby Baluga.  When we got home and I went to get him out of the car he looked at me and said "Dake?  Addy?" as though he thought we were going to another party.  I laughed and told him no, that we were home and going to see Gma, Gpa, and daddy.  He headed into the house full throttle, grabbing a ball and running down the hall screeching.  Rocky, Leina, and Ty joked that Carter must've had a good time at the party because he was acting so wild.  Luckily he wound down during his bath with Gma and I read him a couple books and rocked him before putting him down to bed.  It was a great day and Carter had so much fun celebrating birthdays with all of his friends.  We are looking forward to his party in just over a month.
Posted by Liz Runningmomma at 12:17 PM