When we ran the Run to the Lights 5k at Silver Dollar City at the beginning of the month we each received a pass to Silver Dollar City (SDC) in our race packets.  The pass had to be used during the week, not the weekend, and before the end of the year.  We talked about when to go and realized if we went the Friday after Thanksgiving Ty could go with us because he had the day off.  We planned to head out at Carter's naptime so he could sleep in the car on the way there, we'd have some daylight to ride rides, and then we could see all the lights once it got dark.  Once we made the decision on when to go I started looking forward to the trip immediately.  I was so excited Friday morning that I dressed Carter in his new shirt my mom made him that said "All I want from Santa is a sister."  I put on a shirt my mom bought me that was emblazoned with "Jingle Bellies" in rhinestones and glitter lettering.  We spent the morning decorating the house and then headed out right after lunch.

Carter was excited immediately upon our arrival when he saw the buses driving people to and from the park.  He pointed at the buses yelling out, "bus" the whole way to the entrance.  The weather was perfect as we didn't need coats until the sun went down and then we just needed a jacket or light coat then.  Once inside we headed toward the kid's area to ride the train.  Carter loved seeing the train and couldn't stop talking about it.  Exclaiming "choo choo train!" and saying "bye bye choo choo train" as each train left the station.  Everyone waited in line to ride the train while Carter and I played at a play area where we walked across nets and crawled through holes much too small for me and my awkwardly large belly.  Thomas came and got us when it was our turn to enter the train station and Carter started back up with the "choo choo train" and excitement.  He enjoyed the ride, but not nearly as much as he enjoyed watching the trains.  When we got off the train the line for the carousel was really short so Carter and I got in line to ride.  He was afraid of the carousel at first with me and cried after I set him on the horse.  I started to think we'd have to get off because he just wasn't having it.  Then Ty came over and put him back on a horse and he wasn't as scared anymore.  He didn't seem excited but he wasn't crying so we went ahead with the ride.  I guess Carter just needed to know he was extra safe with daddy!  While we were waiting in line for the carousel I heard someone tell their kid that the tree lighting ceremony was in 10 minutes.  We decided to head up to the entrance area to see the big tree light up and then we headed to dinner.

After dinner we walked around a little bit and then decided to find a place to watch the Christmas parade.  While we were waiting Jeremy, Thomas, Ty, and dad all headed off to ride a couple rides.  It was packed for the parade so I put Carter on my shoulders and climbed onto a short rock wall around trees.  We didn't have a very good view but we could see the taller floats.  One was a train that had fake steam blowing out of it's smoke stack and Carter loved it.  He even waved at Santa as he went by.  Afterward he kept saying, "Choo choo train, bears" because his favorite floats were the train and one with a polar bears on it.
I had figured we would leave after the parade so mom, Carter, and I headed down toward Thunderation (the ride the guys had been on) to meet up with them.  They wanted to ride some more rides and Carter was still doing pretty well although it was past his bedtime so we decided to head back to the kid's area while they rode some more rides.  We played in an area where you can climb through nets up in the trees and Carter loved bouncing as he walked.  Mom went through with him and lost her phone so she had to go back through to find it.  Then I went through with him again and felt like I pulled a muscle in my stomach trying to stand up after crawling through a hole so I went through the next one a different way and it put pressure on my bladder just right to where I tinkled a little bit as I stood up.  I decided we were done with that area after that and we headed to play in the sandbox.  While we were playing another little boy came over and was talking about the foods he was making in the sand.  Carter decided he was making food too and would tell us what he was making.  Then he put his food in the bucket which was the oven and told us it was hot.  His imagination is really taking off!  Around that time we realized there wasn't much of a line for the train so we decided to ride it again now that it was dark and we could see the lights better.  While on the train Ty texted that they were done riding rides and would meet us at the exit of the train. 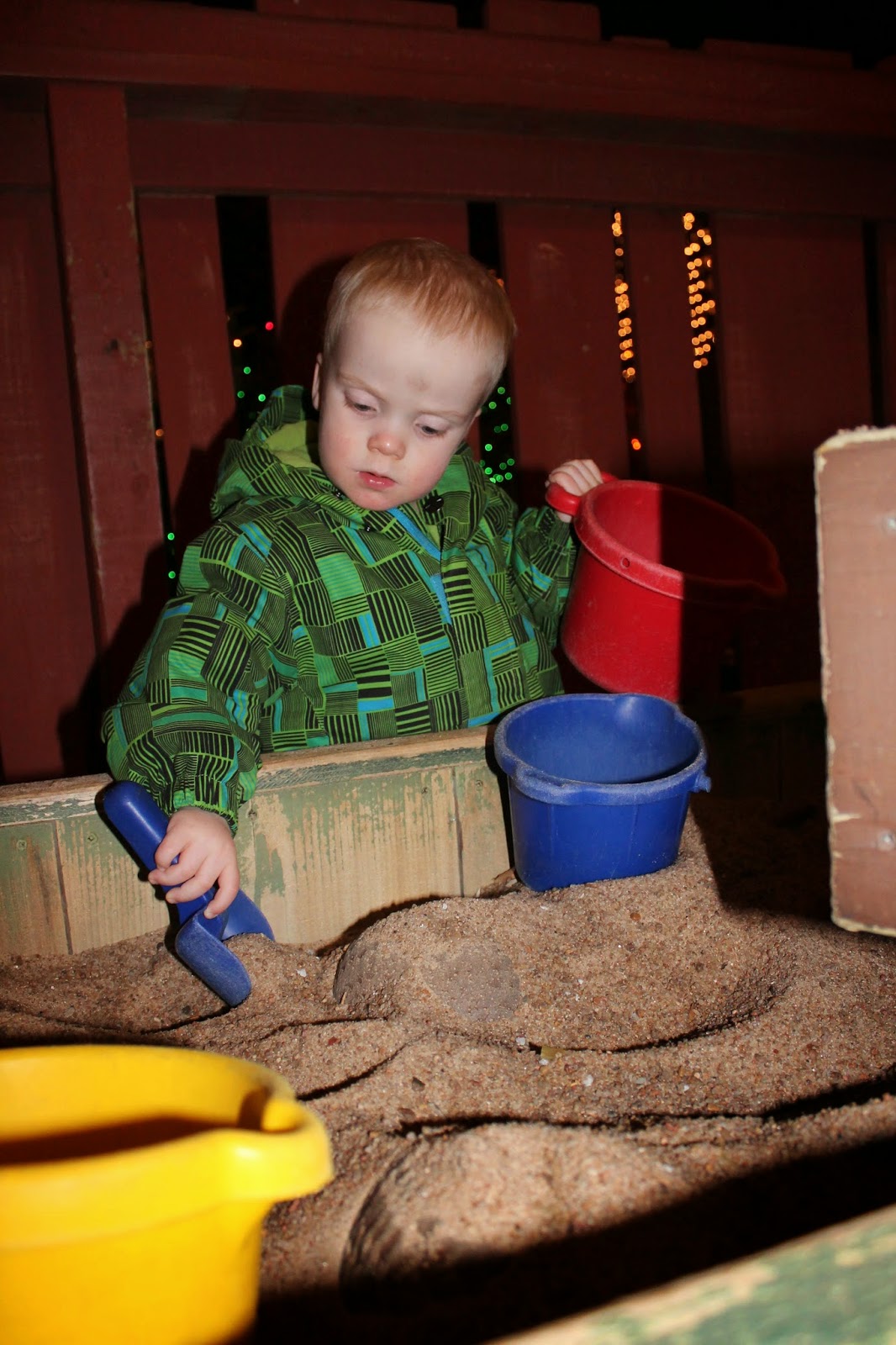 When we got off the train they were getting ready to start the 9 pm Christmas parade and there weren't many people standing around to watch it so we decided to watch the parade again, this time closer where Carter could see more.  He enjoyed the train but not quite as much as he had the first time due to being tired.  Carter fell asleep shortly after we left the park and slept until we had only 30 minutes until we made it home.  He woke up screaming and crying.  Sweet little boy was just miserably tired and uncomfortable and it was nearing 1 am.  I was impressed that once I started talking to him he was able to calm down and sat quietly talking with me about all the fun stuff we'd done at SDC until we made it home.  I changed him into jammies and sat down to rock him while he kept asking to eat so I asked Jeremy to bring us a piece of cheese thinking he must be hungry.  He sat and held the cheese in his hand while I rocked him and then I ended up eating it after I laid him down for the night.  This morning Carter slept in until 9:40 am which is an incredible record for him!  I couldn't believe it.  All that playing and enjoying holiday festivities really wore him out!

Posted by Liz Runningmomma at 7:55 PM