When we were pregnant with Carter I told Ty I really liked the name Carter.  He said he really liked it too and we instantly had a name for a little boy.  We could never quite decide on a girl name we really liked and thankfully never needed to.  This time around was the complete opposite.  Before we even got pregnant we had a girl name picked out, but couldn't for the life of us pick a boy name.  We finally gave up on a boy name and decided we'd wait until after the reveal.  If we needed a boy name we would get busy, if not we were set on a girl name.  The name we plan to use for our little girl is really special because of where it comes from.  We plan to name her Elise after an amazing, little girl Lauren Elise.  To really understand how much the name means to us and how truly special it is, I'm going to start from the very beginning.

I will never forget the day I first heard Lauren Elise's story.  I was in my 2nd year teaching at a new school.  The students were gone for the day and I was checking my e-mails.  I pulled up an e-mail from a teacher whose name I had heard before, but I didn't really know.  It shared the story of her niece, Lauren Elise, who was diagnosed with a number of congenital heart defects before she was born.  The e-mail went on to share that Lauren had gone into her last of 3 surgeries and when being transferred to the recovery room she suffered cardiac arrest and died 3 days later.  She had just celebrated her 3rd birthday.  I had never met anyone in the family, but the e-mail went on to share that Lauren had an older brother who was in kindergarten and his mom worked part-time at the school as a speech pathologist.  I sat at my computer screen and cried big fat tears for Lauren Elise, for her family, for all of those who loved her.  Her story had already touched my heart and I had no idea how much bigger her impact on my life would become.

The following year I was excited to discover that Lauren Elise's older brother, Adam, was going to be in my class.  Before school started I met with his mom, my co-teacher, and the school counselor to talk about Adam's grief over losing his sister.  It was very emotional and I already had such a special place in my heart for this amazing boy who had been through so much at such a young age.  Throughout the school year I was continually left in wonder over Adam's maturity and strength.  He would write stories about his sister during writing time and would tell me about her when he was missing her.  He told me about how they used to play Legos together, how much she loved Halloween and getting dressed up, he told me about the day she died.  He said as they wheeled Lauren toward the surgery room she turned to her dad and said, "I'm not afraid of anything daddy."  From Adam's stories I felt like I had known Lauren.  Even though I never met her I know what a brave and strong girl she was.

The love Adam had for his sister was constantly present.  He will feel the loss every day for the rest of his life.  It's not an easy situation for an adult to face, let alone a child.  Experiencing a devastating loss at such a young age will forever change his life, but it has also made him a better person.  He is the most empathetic young child I have ever met.  I will never forget one day during show and tell.  He was sharing a picture of his sister and telling her story to the class.  I was a little bit nervous because I didn't know how he would handle the questions about his sister.  I shouldn't have been because he did amazing.  Then one student raised her hand and said, "I had a twin brother, but he died when we were still in my mommy's belly."  I looked at Adam and without missing a beat he calmly responded, "I'm so sorry, that must have been very sad for you."

Being a multi-age teacher I was lucky enough to have Adam as a student for 2 years.  It was so hard to watch him leave on the last day of 2nd grade.  He and his family meant so much to me.  During his 2nd grade year his mom was pregnant and his little brother was born in November.  Having babies so close in age, his mom and I talked a lot about pregnancy and I grew to like her so much.  Their family was one that I hated the thought of losing contact with.  I loved Adam so much, I loved talking to his mom.  I couldn't stand the thought of not having regular contact with them.  Then this past summer I received a message from Adam's mom asking if I'd be interested in watching her son, Jake, a couple days a week since I was staying at home.  I was so excited and immediately agreed.  I get to watch little mister Jake twice a week and on some days his mom or dad bring Adam with them to pick Jake up!

Lauren's family created a foundation to raise awareness and funds for Congenital Heart Defects and research.  Each year they do a silent auction to raise money for the foundation and this year I volunteered.  While I was standing at my post, my mind started wandering.  I thought about how special this family was to me and how much Lauren Elise's story had impacted my life.  I thought about how I loved Lauren and felt like I had known her through all of Adam's stories.  I started to wish there was some way I could honor her and help her memory to live on.  Then it hit me.  If we had a girl we could name her after Lauren Elise.  For some reason naming her Lauren didn't feel right.  That name was Lauren's and when I heard the name Lauren I thought only of her.  But Elise seemed right.  The minute I got home I asked Ty what he thought of the name and he loved it.  So we decided on Elise Kay to honor Lauren Elise and my mom, Sondra Kay.  It is such a special name.  I love that I will be able to share Lauren's story and legacy with so many people just by sharing where our baby girl's name comes from.  I look forward to explaining to Elise where her name comes from and why it is so special.  I love that the name is already allowing me to share Lauren Elise's story with you.  The more people who hear her story, the more her legacy lives on. 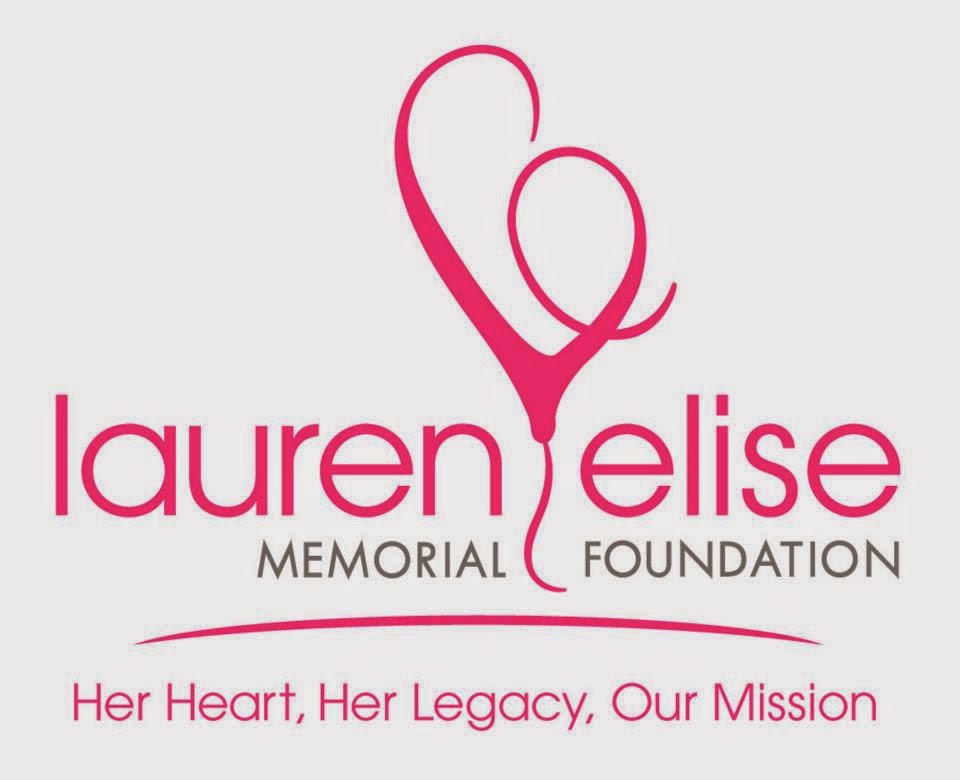 To read more about Lauren Elise's story and to check out the foundation created in her honor, go to the foundation's website here.
Posted by Liz Runningmomma at 11:32 AM