Our 4th of July 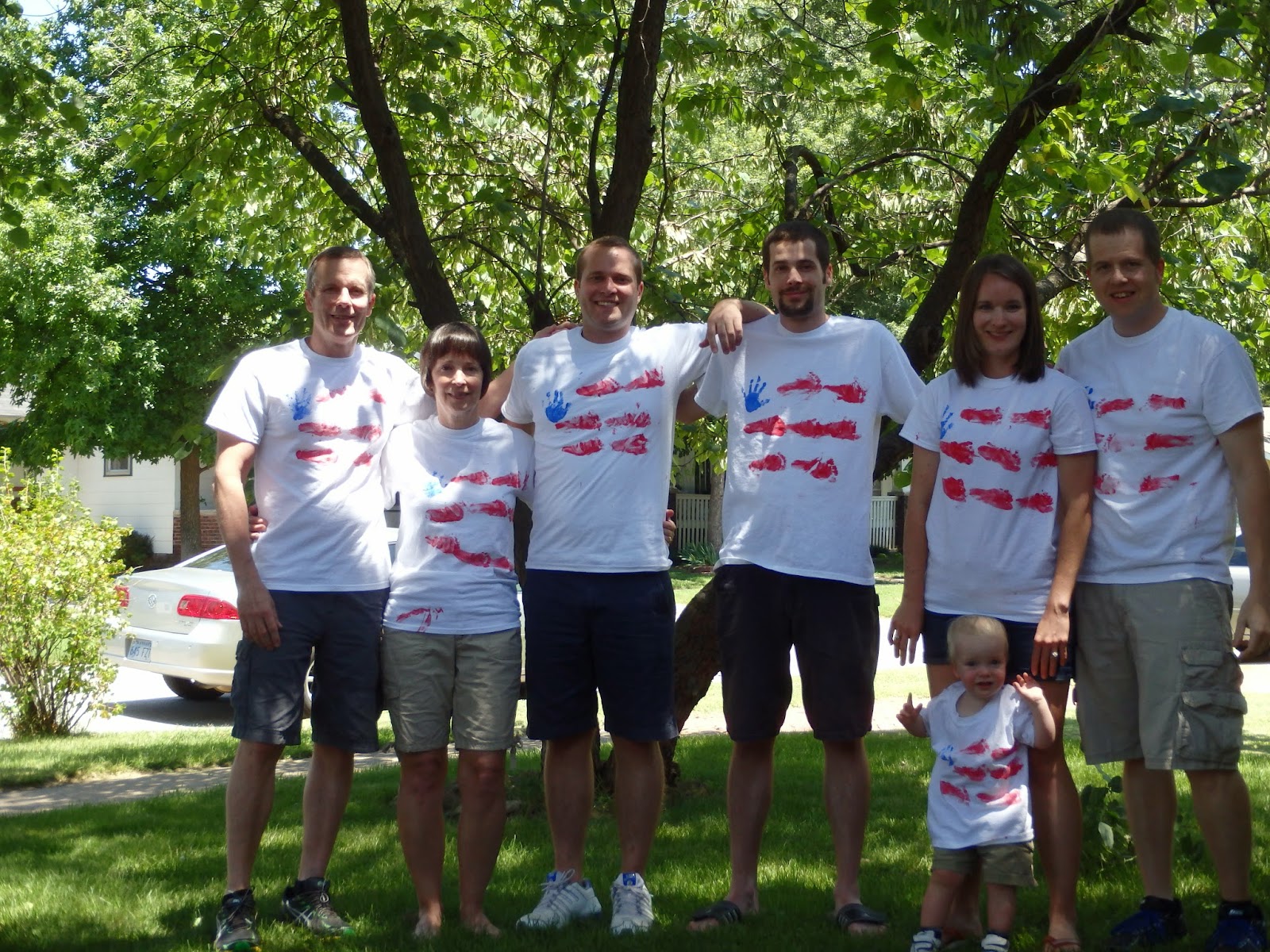 Our 4th of July began early with the Firecracker 5k at 7:30 am.  I'd had a rough couple of weeks of training with my legs feeling sluggish and my times much slower than I'd liked.  I decided to take off at 7:20 pace and try to speed up as the race went on.  I started out too fast and eased into 7:20 pace going through the first mile in 7:22.  My 2nd mile was 7:06 and my last mile was 7:01.  I was pleased with how I was able to speed up throughout the race and I was okay with my time of 22:16 which was good for 1st place in my age group and 4th overall female.  Jeremy finished in 19:03 and won his age group, dad finished around 25:45 and was 3rd in his age group.  Ty finished in around 29 minutes while mom and Carter walked one of the two laps and took pictures during the race.  Last year we left the race with 2 shirts and one medal.  Yesterday we left with 5 shirts and 3 medals.  I'd say we were much more successful this year.  Read about last year's Firecracker 5k here.


We stopped at McDonald's for breakfast on our way home and then enjoyed some playtime outside when we got back.  Grammy showed Carter how to pick blackberries off her bush in the backyard and he ate all the ripe blackberries he could reach.  It was a bit of a dangerous adventure for me because I would grab the branches and pull them back to keep him from getting poked by thorns and ended up with scratches on my hands and arms, but it was well worth it to see how much joy picking his own snack brought him.  After everyone had showered we all put on our special American flag shirts Carter and I made the week before.  I bought the materials in plenty of time to make just a couple shirts a day leading up to the holiday.  The plan was to make 2 or 3 shirts each morning, but I got excited and made all 9 of the shirts the same day I bought the materials.  By the end of our experience Carter was totally over it (he had laughed the entire time I made his prints on the first 3 shirts), my arm was tired, and we were both covered in paint.  It was the perfect time for Carter to play in the sink and forget how annoyed he was with me for printing his hand 9 times and his foot 54 times.  The first 49 footprints he didn't mind, but the last 5 he wanted it known that would be his last shirt! 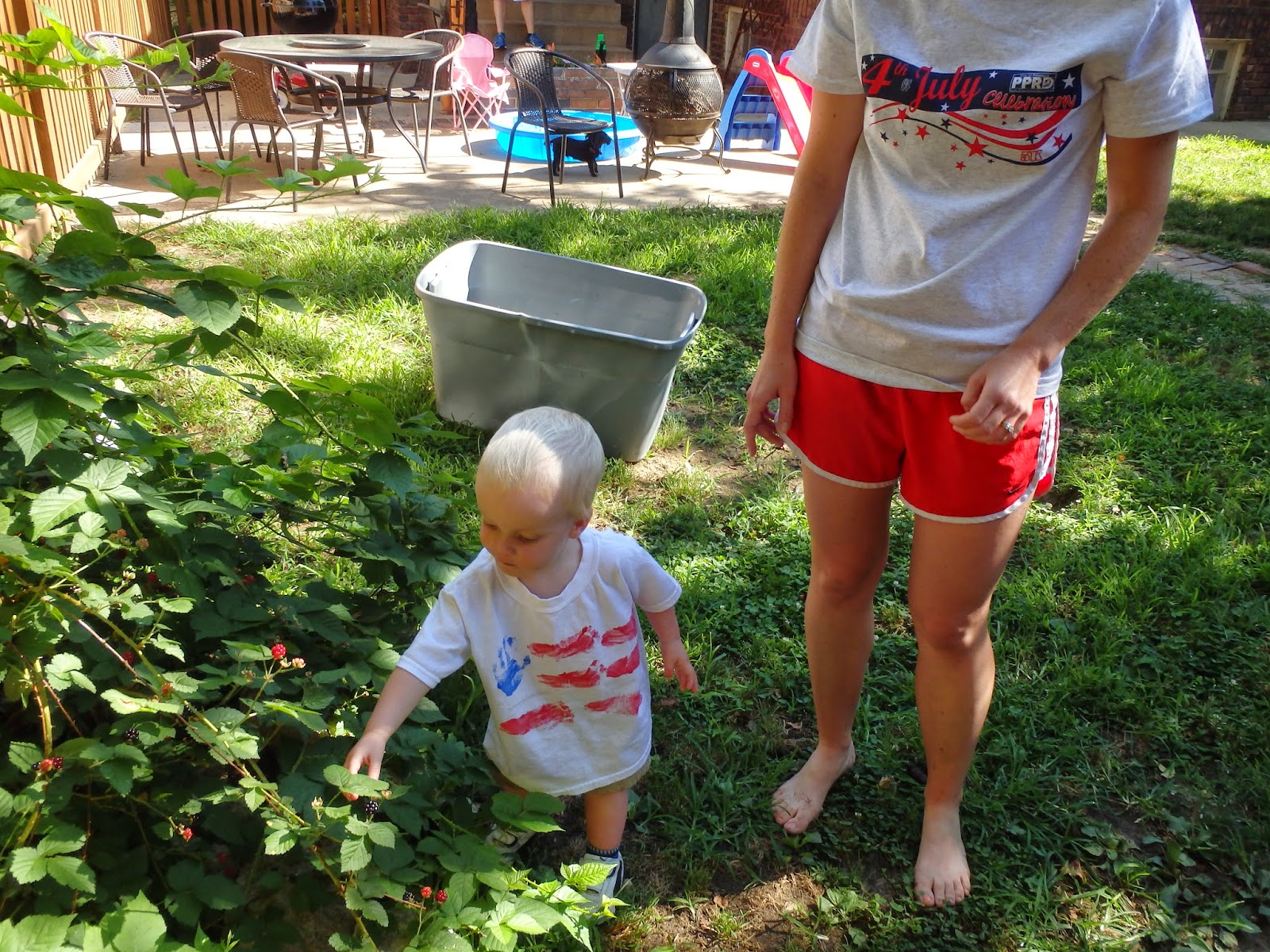 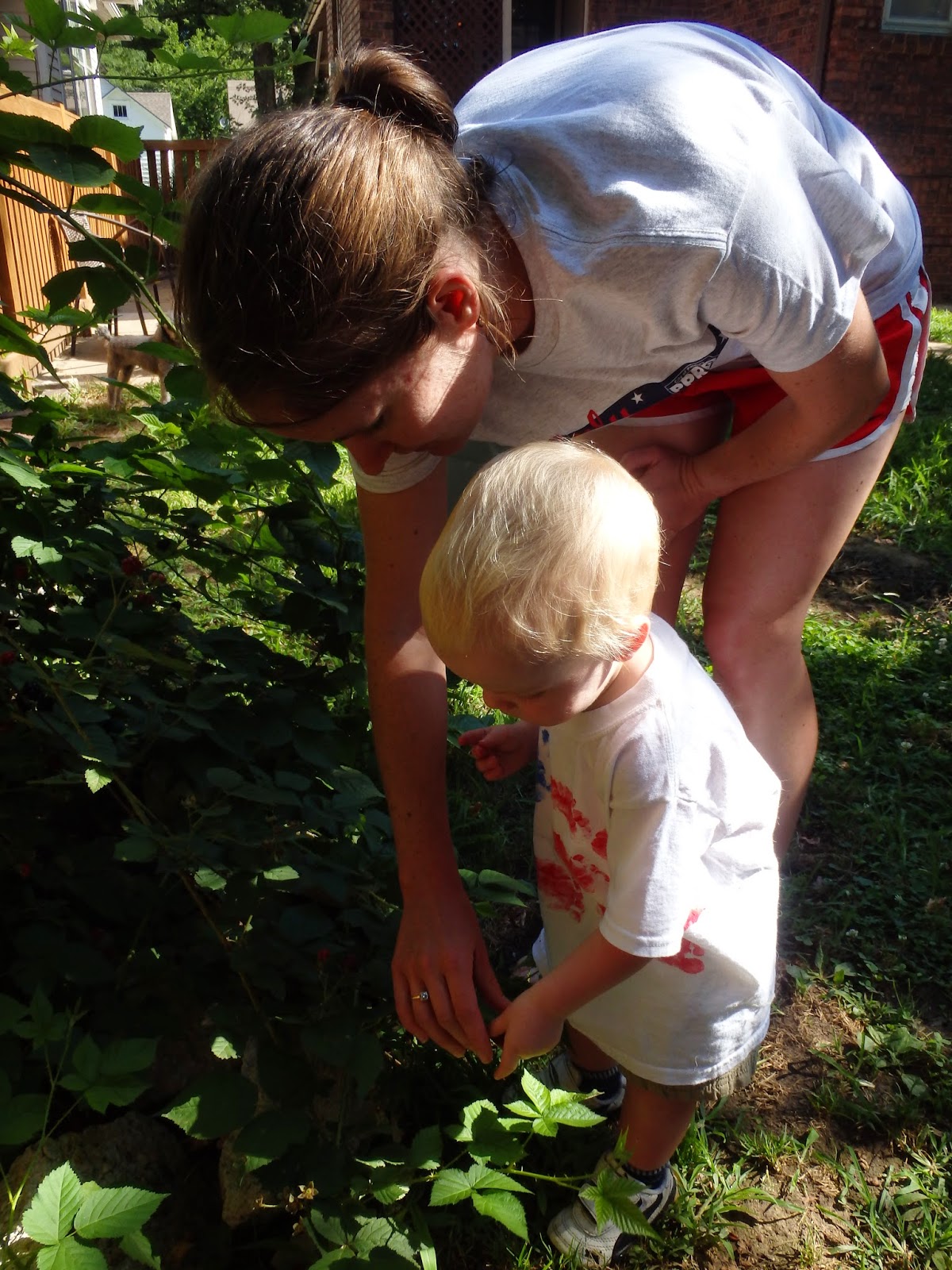 Carter went down for a nap after lunch and was woken up after a little over an hour by the dogs barking in the backyard.  We decided to venture out to the festivities at the park.  Carter enjoyed playing at a couple of playgrounds, building with blocks at one of the park shelters, people watching, riding the train, and sharing a peanut butter cookie with me.  While we were building with the blocks, Carter would pick up blocks and hand them to mom or me saying, "Here ya go."  It was the cutest and the first time I've ever heard him utter the phrase.  Mr. Man is getting more and more verbal! 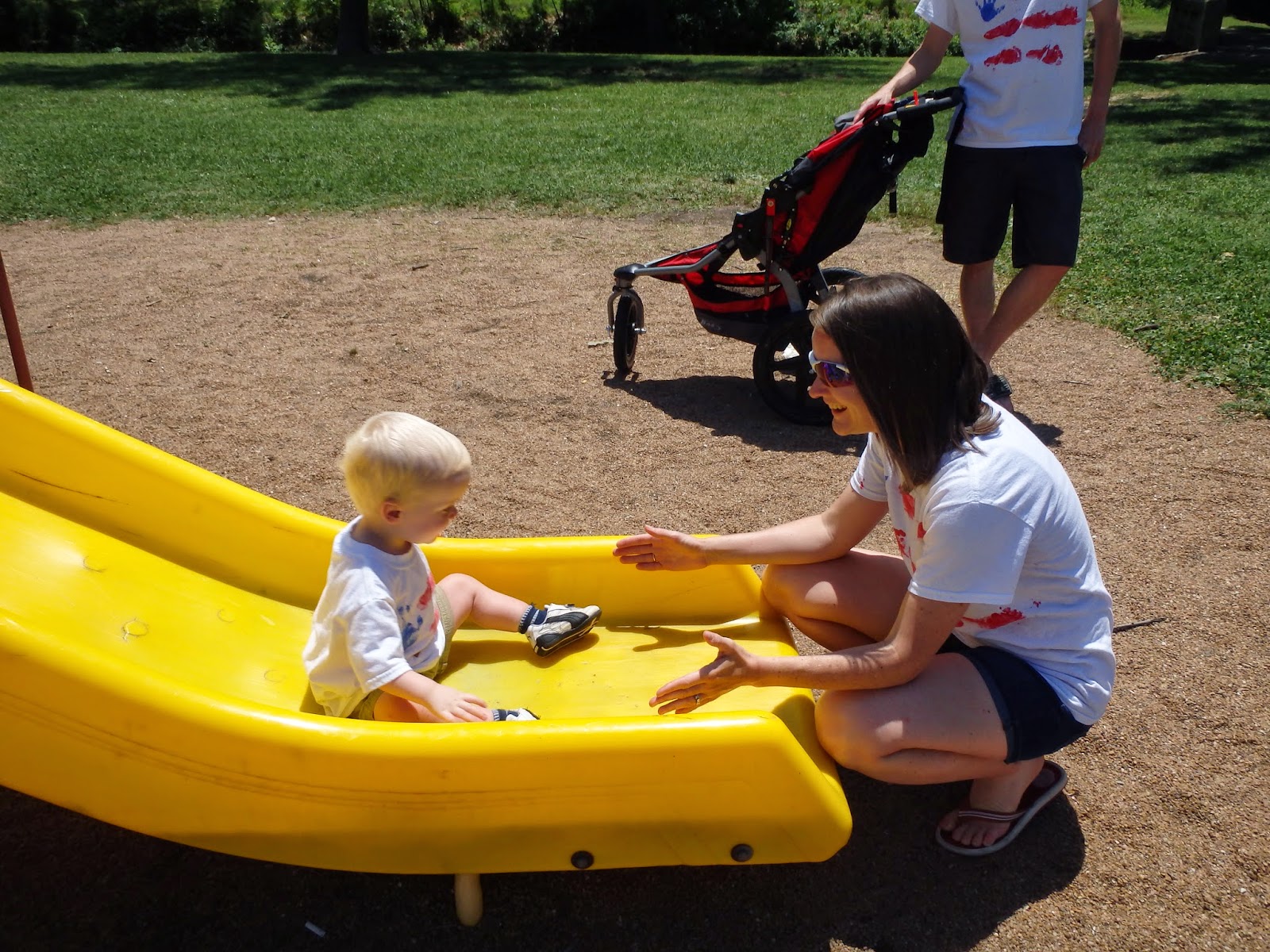 When we arrived home we played inside for a bit which included Grammy and Carter peeking under the basement door at the kitties.  Then headed back outside to grill and light fireworks.  Ty had picked up some kid-friendly fireworks for Carter and we enjoyed lighting them together.  Carter loved throwing Snappers and I couldn't believe he could actually get them to pop when they hit the ground.  When we were lighting the snakes he kept wanting to touch them so I would point at the lit ones and tell him, "No, hot" and then I'd point at the old ones and say, "yes".  He would touch the old ones that were cooled off and when I'd light a new one he would point at it and say, "No hot!"  My little smarty boy!  We also had two parachutes.  Ty lit the first one while Carter and I ran after it and caught it out of the air.  I lit the next one and dad ran with Carter after it.  Unfortunately the parachute landed on the roof, so they were not able to catch it.


Carter was really tired since he took a short nap so we put him to bed when it was still light outside.  I had thought about letting him stay up until the city fireworks show to see what he thought, but only planned to do it if he took a nice long nap.  With only an hour nap it would have been a recipe for disaster.  After Carter went to bed and it was dark outside we headed over to Thomas' summer house to light off some bigger and louder fireworks.  We had such a great day!  Anytime a day involves running, lots of family time, watching Carter enjoy a first, and pretty things in the sky it's a success.  I hope you all enjoyed celebrating our wonderful country as much as we did! 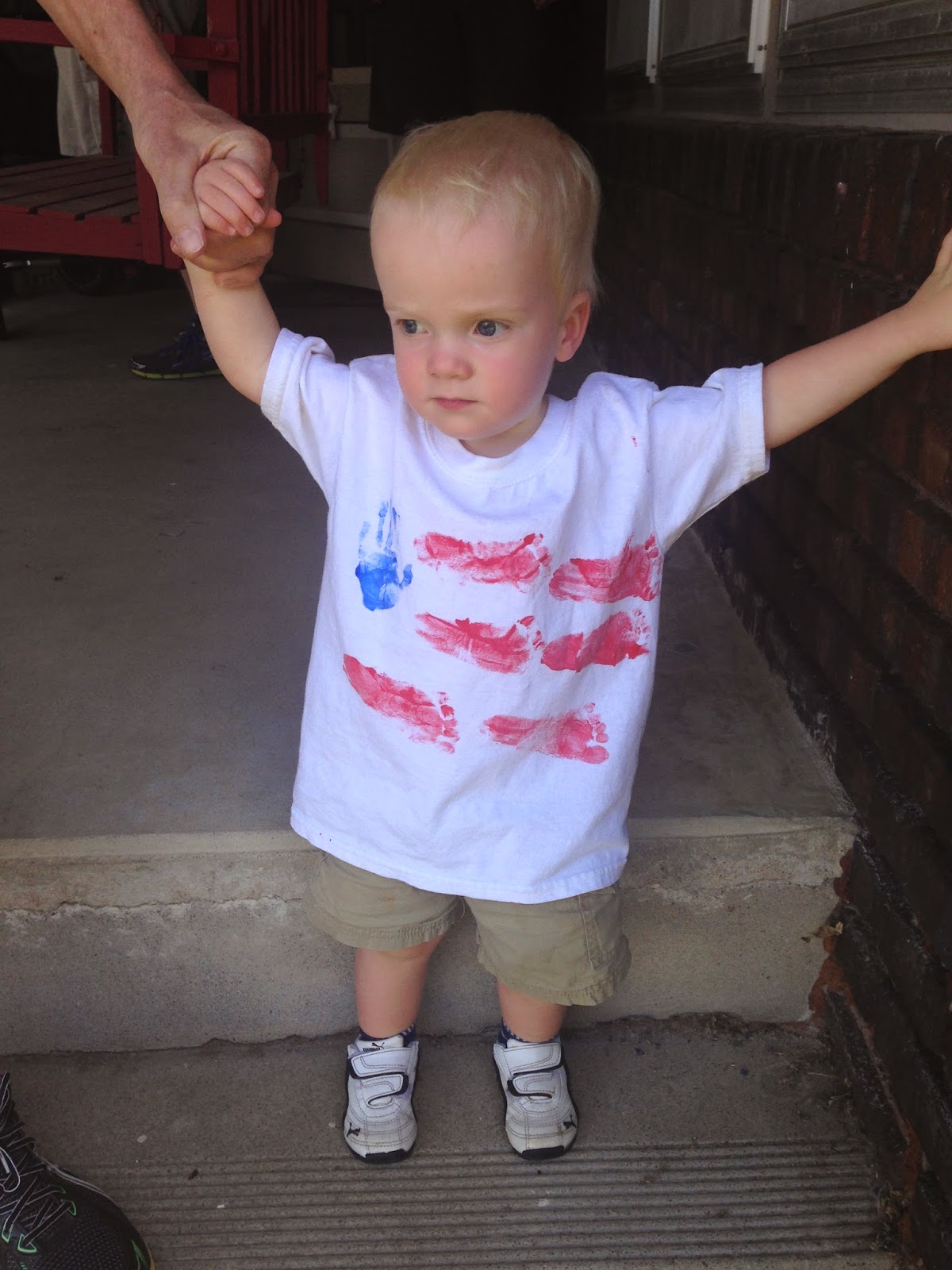