A Weekend of Celebrations

This weekend my parents and brother, Thomas, came to visit.  We celebrated my birthday (which was Monday) and my parents' anniversary (which was Friday).  Of course Carter was the center of attention and enjoyed every minute of it!  He wears himself out and doesn't know what to do having 4 visitors along with his mommy and daddy all to gloat on him and shower him with kisses!

Yesterday we celebrated my parents' anniversary.  They arrived later than expected so Jeremy wasn't able to come see them before he went to work.  Carter made them a painting as an anniversary present and we got them a Berry Chantilly cake from Whole Foods because my mom is slightly obsessed.  I also had them open a present from Ty's mom which they LOVED!  More on it later.
My parents had never tried Top That! Pizza and really wanted to, so we ate there for dinner.  A while back Thomas had wanted to go there and asked me about it.  I told him that the food was good, but there just wasn't enough and I left still hungry.  Later I realized I was pregnant when I had gone and the pizza is actually very filling.  We always joke about it now.
When we got home Carter was asleep and actually stayed asleep in his car seat when we brought him in.  We laid around and relaxed for a while and then it was time for cake.  I had my parents cut the cake together which Thomas thought was ridiculous, but who cares, I thought it was cute!
We stayed up WAY too late!  I didn't go to bed until a little after 1 am.  I knew I was in for a rough day the next day because Carter has been waking up at 7 am most days.  Once I was ready for bed I went into Carter's room and whispered in his ear, "Mommy's going to bed way too late, please sleep until 8:00 or later tomorrow morning.  I love you!"  This morning I woke up at 8:30 and Carter was still asleep so I went back to bed.  He slept until 10 am!  I kid you not, he woke up to eat pretty much right after I went to bed and then slept from 1:30-10:00!  I guess that was a late birthday present for me!
Ty cooked breakfast burritos for everyone, Jeremy arrived, and we all sat around and played with/watched Carter for a while.  My parents, Jeremy, and Ty all went house hunting for some prospective houses for Jeremy as Carter napped.  Then it was time for family pictures.  Every year for my parents' anniversary we take a family picture.  This year when deciding what color to wear, my mom wanted blue to match Carter's eyes.  I picked one of Carter's onesies and we all matched as closely to it as we could. 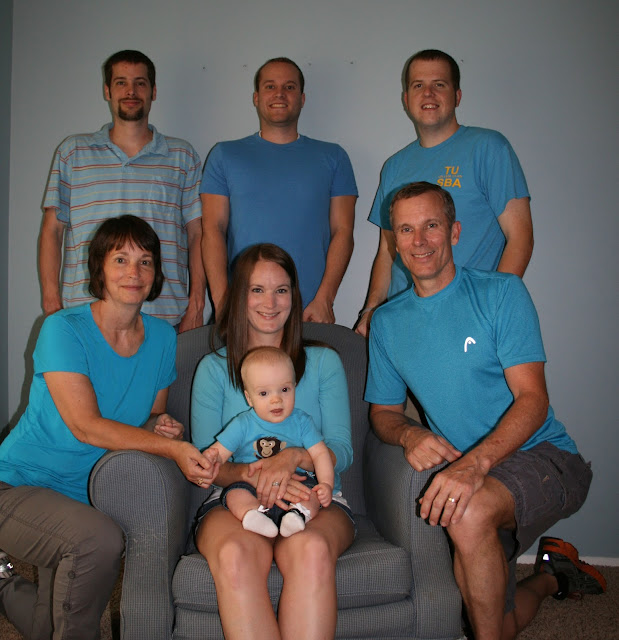 After pictures we all walked to one of the houses on their list that was about three-quarters of a mile away.  It wasn't too hot, but very humid and we all came home very sweaty.  Which made us so glad my mom wanted to take our picture at the house so we wouldn't have to drag Carter around for pictures.  The whole walk we were joking about being some kind of gang with all of our matching shirts.  Then we happened to walk by a woman out mowing her lawn wearing the same color shirt as all of us. 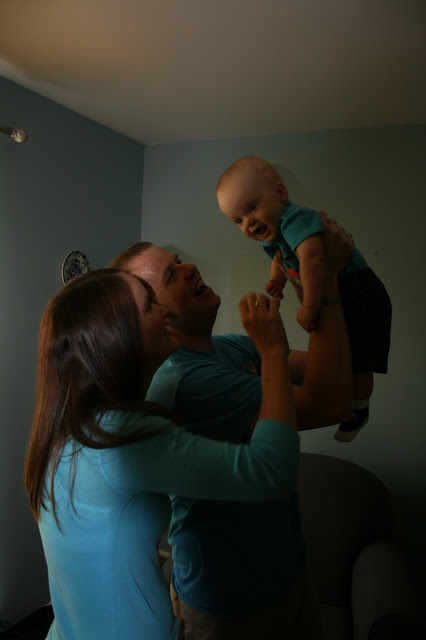 I got to pick where we ate for dinner for my birthday so I picked Pei Wei.  It was delicious!  I swear by their honey seared chicken.  It's always what I want after a marathon, half marathon, or long training run.  Ty even fed it to me after a marathon while I took an ice bath, but was too exhausted to hold my sweatshirt out of the water and feed myself at the same time.  The fortune I got in my cookie was very fitting after the post I wrote on Friday. 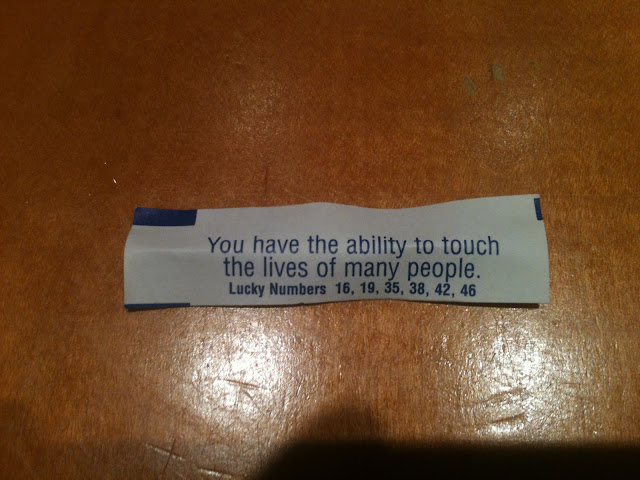 We had a wonderful weekend, which as always, went by too quickly.  Tuesday I am leading a training for new teachers on our math curriculum and the alignment with Common Core.  It will be the first training I've lead by myself.  I've lead a few trainings, but always with other teachers.  I'm actually pretty excited to share great resources with new teachers to help make their first year in our district easier.  I just need to straighten up my classroom (I've been working on it and just piling stuff on tables, whoops!) and finish up my Powerpoint tomorrow.  But plenty of time will be spent cuddling with this cute baby! 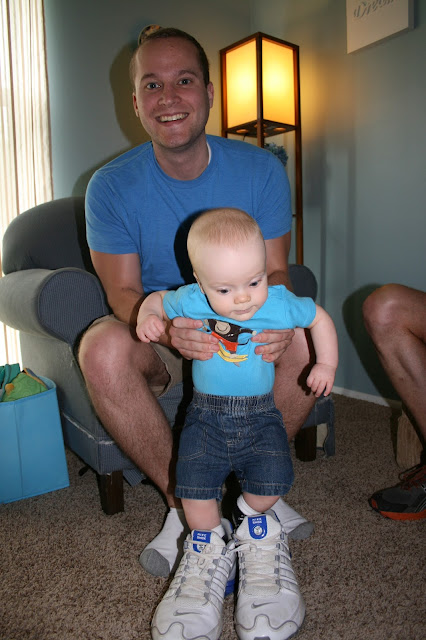 Posted by Liz Runningmomma at 7:52 PM