Saturday morning we woke up and got ready for our race.  We all put on our green gear and got Carter’s 1st St. Patrick’s Day outfit ready.  Carter slept later than normal and I let him.  He normally eats for about 15 minutes in the morning, but he ate for closer to 30!  The race was in a town about 45 minutes away.  Packet pick-up ended at 8:45 and the race started at 9:00.  I was getting nervous as we neared 8:00 and Carter was still eating!  Finally at 8:05 Carter finished eating and we hit the road.  We arrived at the race right at 8:45, but luckily my friend, Ang, was already there and had picked up our packets for us.
My dad took Carter in the stroller and we all walked to the start.  Ty was running his 3rd race for the 3rd weekend in a row for his company’s charity challenge, so his goal was to finish.  I was hoping to run faster than my trial 5k time of 22:57 which I ran with Harper on Sunday.  Dad was out to finish in the top 3 in his age group, but was a bit nervous about it since he was pushing the stroller.  He had seen the age group awards and really wanted one. 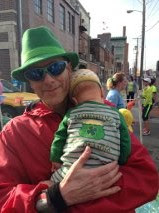 The course was a 2 out and back course.  That meant we ran out and back turned around and did it again.  Not the most enjoyable course, but it was spectator friendly for my mom who just had her knee scoped.  She had signed up for the race, but had to settle for cheering us on.
I finished the race in 22:48, my new postpartum PR!  Dad and Carter finished in 23:40 and Ty’s time was 26:48.  We went over to look at the results before the awards ceremony.  I found my name and looked across, I had finished 2nd in my age group.  I ran my finger down looking for dad and saw my mom’s name.  My dad had accidentally run with my mom’s bib on.  I couldn’t stop laughing thinking of my dad receiving an award for first place in the female age group!  We notified the timing people and they fixed the results.  Dad won his age group!  Ty finished 6th in his age group.
As we walked over to the area where awards were to take place I noticed a podium.  Dad decided to take Carter up on the podium with him when he received his award.  When he walked up to the podium someone in the audience yelled out, “I want that trophy!”  Yes, he’s the best trophy I’ve ever received to the most fulfilling race I’ve ever run, that of labor and delivery!
Linking up with Ashley for Move it Monday! Posted by Liz Runningmomma at 7:06 AM