Each time I heard Ty tell someone Carter's birth story I enjoyed hearing how his perspective was a little bit different from mine and how he would include details I didn't.  I really wanted him to write his version down like I did.  It took a while to convince him to do it, but without further ado, here it is! 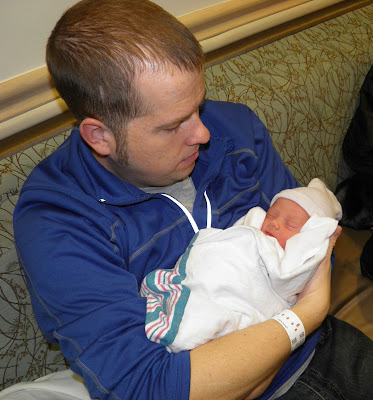 Thursday December, 13th 2012, Liz and I are sitting on the love seat side by side, watching Archer (my current favorite show that I hope Carter finds just as funny as me someday). And by watching, I mean I was surfing the net on my phone for funny pictures and Liz was surfing the net on the computer, probably reading mommy blogs.  At one point, I find a hilarious photo about Dave’s mid-wife service with a creepy guy hovering over a pregnant belly. I immediately text it to Liz’s parents as well as Liz herself (even though she was sitting right next to me). 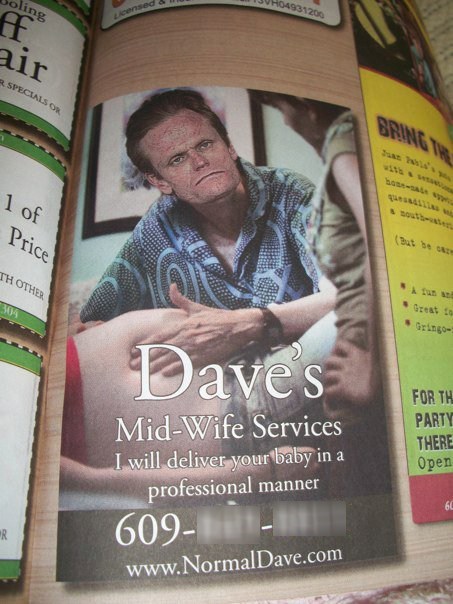 As I anticipated, she opened the text and immediately started laughing so hard that she jumped off the couch and ran to the bathroom. For those of you who are dads out there, you know pregnant women take no chances when it comes to hard laughter and being 8 months pregnant.

After all was back to normal, I asked Liz if labor could be started by hard laughter. She said that she didn’t think so but that she would be pretty mad if I sent her into labor early by making her laugh too hard!

Jumping to the next morning, my day starts like normal getting up at 6:45 and hopping in the shower. About half way through my shower Liz comes into the bathroom and floors me by uttering the phrase “I think my water broke”. I slowly pull back the shower curtain, look her up and down and agree with her that yes, her water has broken. Then she back tracks saying, no maybe it didn’t break. I look her up and down again, and agree, no your water did not break. After an awkward silence, I think that she realized that I have no clue what I am talking about and that I am only agreeing with whatever she says…

At that point it should have been obvious that Carter was on his way but it just hadn’t really sunk in yet. We spent the next hour calling the doctor (the message service they used wrote the call back number down wrong so it took a while), packed our hospital bags, and took some last minute pregnancy photos. 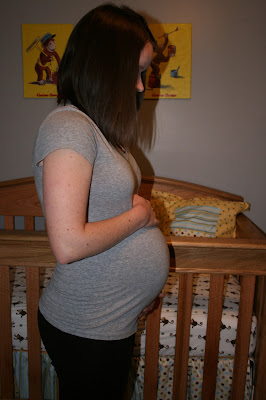 All said and done, we got to the hospital a little before 9am, checked in and were assigned to a room. Liz changed in to the awesome hospital robes (sarcasm) and climbed in bed where they attached a couple of heart monitors for mom and baby, and performed a swab test to make sure her water really had broken (it had). 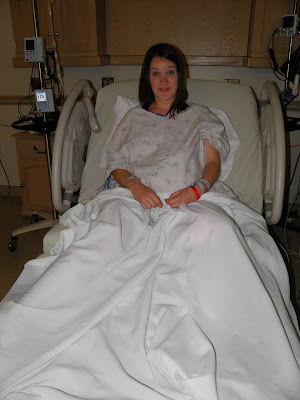 After that it was a waiting game, first for her parents to get to the hospital and then for Carter to come! At some point I thought the contraction monitor was actually recording EARTHQUAKES!!!! I immediately took a picture and texted it to several people, none of whom found it as funny as I did. 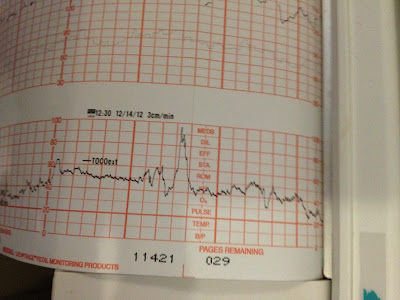 As the afternoon progressed, the contractions got stronger and Liz found it helpful to be up and walking around. Since she was a low risk pregnancy (I guess there is no such thing as a no risk pregnancy so I guess we will take low risk…) they let her walk 20 or 30 minutes and then hook back up to the monitor to check on baby. 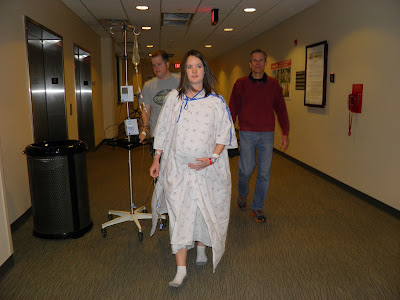 After what turned out to be her last walk, she went to the bathroom in her room when another contraction hit. The nurse was there watching her closely when Liz said she has to push. The nurse immediately snapped to attention and urged her not to push. Getting her back into bed, several more nurses started arriving with everything needed for the birth. Everything except for the DOCTOR.  I am no doctor (or seismologist), but I’m pretty sure doctor is at the top of the supplies list recommended for delivering a baby.

About the time that the absence of a doctor had become noticeable, Liz has her strongest contraction yet, along with the urge to stand up. Normally this would be a reasonable request, but moments earlier, the nurses transformed the uncomfortable hospital bed into an uncomfortable baby delivery bed making getting in and out difficult.

Liz being the always considerate person that she is, asks permission to stand up from the nurse… while actually standing up. I will never forget the look on the nurse’s face when she turned around to see her 36 week pregnant patient who was a few short minutes from birth standing in her hospital bed. Her only response was to be careful (if that paragraph didn’t drive home the point of how awesome our nurse was, I can tell you she was awesome).

After the standing in the bed contraction as over and we got Liz back into the proper birthing position, I noticed that we could check doctor off of the supplies list for having a baby twice because now we had two doctors. Apparently the doctor who was supposed to deliver Carter was stuck in traffic right outside the hospital (there was a lot of construction around the hospital and it was rush hour on a Friday) and the nurse called for any available doctor on the delivery wing.

About two minutes before she started pushing, the doctor who was supposed to be there walked in, suited up, and immediately proclaimed “I love delivering runners babies”. I couldn’t help but smile at that comment!

A minute later, Liz has a contraction and is told to push. And much to my surprise, I see Carter's head! After only one contraction and 3 or 4 pushes, Carter’s head was out and I could see his shoulders. A short minute later with another contraction, she pushes again and at an amazing speed, Carter pops out!

They quickly suction his mouth and nose and place him on Liz’s chest. I could feel the immediate connection that was created between Liz and Carter. It was a beautiful thing. I lean over and wrap my arm around the two of them and immediately feel a similar connection. Shortly after that, the doc asks if I want to cut the cord and I say yes. I’m not going to try and describe the cutting of the cord because there is no way to describe it… it is a very different experience.

The next hour is a blur of me following Carter around as they check over every part of him and record all of his different stats. Then finally, we get to reunite with Liz and introduce Carter to his family (my parents and Liz’s brother showed up minutes after Carter was born). 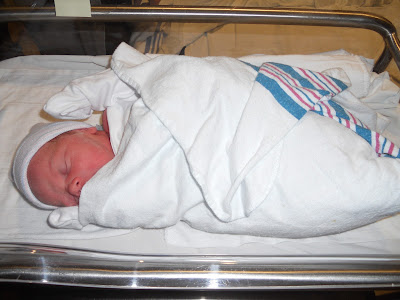 And now three months and two weeks later, we have a happy, smiley baby boy who has completely changed his mom and dad’s lives forever, for the better.
Posted by Liz Runningmomma at 8:00 PM