Race to the Well 5k


This past week was pretty pitiful as far as running went.  Monday and Tuesday I was sick and didn’t run.  Wednesday I had a migraine and didn’t run.  Thursday and Friday I was just plain lazy and wanted to hang out with visitors rather than get out and exercise.  Saturday came along and it had been a week since my last run, the St. Patty’s Day 5k last Saturday.
Ty was signed up for the Race to the Well 5k at 5:00pm.  I still didn’t feel very motivated to run.  I figured if I was in a race at least I would get a run in.  Ty’s parents were in town visiting.  It was chilly, windy, and drizzly.  We decided Ty’s parents would stay home with Carter due to the cold and rain and we would run the race.

Since I hadn’t run in a week I figured I would take it easy.  We got to the race and looked around.  The weather must have deterred many runners.  There were only 82 runners in the 5k.  When we got to the turn-around there were 4 runners ahead of me, but there was a huge gap and I didn’t have much motivation to catch up to them.  I saw Ty and he looked really strong.

I finished in 23:41, a minute slower than the week before, but I felt good about finishing in 7:38 pace.  I was the first female finisher and 5th overall.  I watched for Ty to finish.  I noticed there were not many finishers ahead of him and I figured he placed in his age group.  We had planned to leave right after the race and skip awards, but I told Ty we had to stay if he placed. 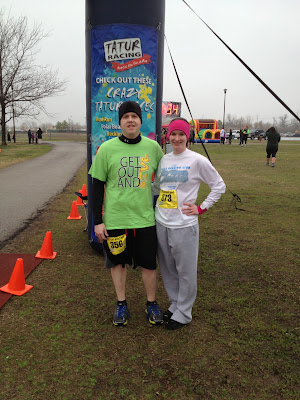 We walked over to where they were posting awards as they became ready.  We found Ty’s name, looked across and saw he was 3rd place in his age group!  My heart jumped up in my chest.  I was so proud of him.  His first medal at a 5k!  I was so excited, I felt as if it was my first medal.
During the awards ceremony when they called Ty’s name I couldn’t scream loud enough.  I wanted to yell out, that’s my husband!  This is his 4th race in 4 weekends and he is amazing!  I love that he has become a runner.  His first race was the St. Patrick’s Day 5k 2 years ago.  Since then he has run numerous 5ks, a Tough Mudder, PRs left and right, lost nearly 30 pounds, and now earned a medal!  I may not be running PRs or firsts anymore, but I feel like I am every time I watch Ty achieve one.
I'm linking up with Ashley for Move it Monday! Posted by Liz Runningmomma at 8:43 AM