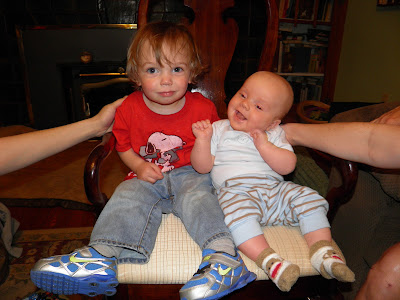 Last weekend Carter got to meet his best bud, Hayden.  Hayden is my best friend’s son.  He’s 17 months old and wasn’t so sure of Carter.  He liked him and wanted to be around him, but he was also nervous.  It was so cute because he would go over and rub Carter’s head and then grab his own hair and pull it.  Almost like he was saying, hey Carter where’s your hair?  We had them in a chair together and Hayden would put his arm around Carter.  I can tell he will be protective of his buddy.
Yesterday Erin and Hayden came to visit.  Carter hadn’t been napping very well in the afternoon the last few days, but of course fell asleep soon after they arrived and napped for 2 and a half hours.  It worked out well for me because I had lots of play time with Hayden, but was disappointing for Erin since she came to see Carter! 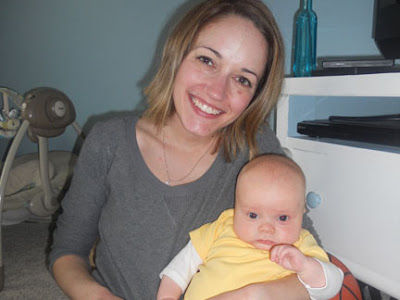 While Carter was sleeping Hayden played with some kitchen tools.  Each time Carter would make a noise, Hayden would want to go check on him.  It was so precious.  He went in and offered Carter the whisk he was playing with.  He put it through the slats of the crib and put it in Carter’s palm.  Carter grasped it in his sleep.
When Carter FINALLY woke up, Hayden was all kisses and smiles this time.  He wasn’t nearly as nervous around him.  He even wanted to lay on him.  Carter was the perfect size for a pillow!  We had a blast and I can’t wait to get the boys together again.  I know Hayden will enjoy Carter a lot more when he can play, but Carter sure is getting him ready for his baby cousin coming in late June.

Posted by Liz Runningmomma at 9:47 AM

Email ThisBlogThis!Share to TwitterShare to FacebookShare to Pinterest
Labels: playdates