Saturday morning was an exciting first for Carter and me.  It was our first 5k together since he was born. My last 5k was the Jingle Bell Run at 35 weeks pregnant, the weekend before Carter was born.  It was also the first time Carter and I have been out the door before 9am.  That will end this week when I return to work!

We hadn’t preregistered so Ty went to register us while I got the stroller and Carter all set up and ready.  It worked out perfectly because the race was right at Carter’s morning nap time and he slept the whole time.  It was 27 degrees, so Carter was super bundled up!

I have been running with the stroller every day since I started back, but I was nervous about having the stroller in a crowd.  The race was small, about 100 people, which was perfect for my first race with a stroller.  I went to the outside of the start and started farther back than I needed to.  I didn’t want to get in anyone’s way.

As we were waiting for the race to start Ty asked what I thought I could run.  I wasn’t sure, but I had run 4 miles a couple weeks ago and hit the 5k mark in 27:30, so I figured I would definitely be faster than that.  He decided he would try to keep up with me.  His PR was 26:53 and he knew he should be able to run around 27 and a half minutes. 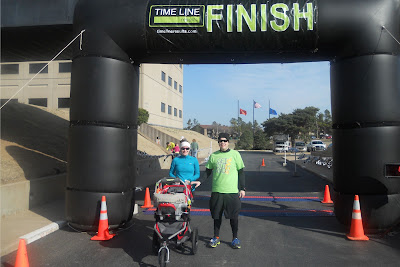 The gun shot and off we went.  Navigating the start was a little bit difficult because I went way to the outside of the course, but people would shoot out to go around without looking and I’d have to steer around them.  We went through the first mile in about 8 minutes.  I knew we were on pace to run a bit faster than Ty had expected and I could hear him running along behind me.

The race went out and turned around.  As I was turning around the cone I heard a man running behind me start yelling to the race workers saying, isn’t that woman with the stroller amazing?  When he caught up to me he ran beside me for a bit and said how awesome it was I was running fast with a stroller.  Then he said he wanted my training program.  I chuckled to myself because I’m only running about 10-15 miles per week, taking it easy coming back.  I enjoyed the encouragement though and had to smile.

I finished in 24:06 and Ty finished in 24:54.  My running app showed that the course was actually 3 miles, not 3.1.  Assuming Ty would have run the last 0.1 at the same pace he had run the rest of the race, he would have finished in 25:47.  A PR of over one minute!  I was so proud of him.  He said the whole time he was assuming we were on pace for around 27:30 and was frustrated that he felt as poorly as he did.
Running with a stroller I was able to finish 2nd in my age group and 10th overall female.  It felt good to be able to run a decent time just 11 weeks after Carter was born and while pushing a stroller.  Carter won his age group which made me think of my mom.  During an out and back race we did when I was pregnant, as I saw my mom, she yelled out what place I was for overall female and then yelled and first fetus!  She cracks me up!

It was really fun to get comments from other runners too.  After the race, as we were waiting for the awards ceremony, a few people came up to me to congratulate me and tell me they were impressed with how I ran with a stroller.  One lady said her group of friends was making bets on whether there was actually a baby in the stroller or if there was a motor in there.  It’s always so much fun to get compliments and encouragement from other runners.  I love the running community!
Let me tell you, running a race with a stroller is a little bit more difficult than just a training run.  My lower back and arms were sore the next day!

Now I’m excited for the next race we plan to run in 2 weeks, a St. Patrick’s Day race on March 16th.  I’m not sure if Ty will run with Carter or I will, but either way I am looking forward to it! Posted by Liz Runningmomma at 7:15 AM