With all the awesome training runs I'd been having I was really looking forward to the Zoo Run 5k. I was pumped to put my training to the test and see what I was capable of in a race. With the times I had been running for tempo runs and speed work I estimated I should be able to hit 7 minute pace and was hoping for a sub-22 minute 5k. Then the Tuesday before the race I was hit with a stomach bug which left me feeling pitiful on Wednesday but mostly better by Thursday. To be safe I just ran 2 miles on Thursday but struggled to run under 9:30 pace without the stroller which was pretty slow for me. My run Friday was much better hitting just over 8 minute pace without the stroller, but I felt sluggish and starving toward the end. I knew going into the race on Saturday the biggest key would be fueling. Normally I have no trouble running a 5k without breakfast and having fasted overnight since it doesn't take very many calories to run that short of a distance. But after 4 days of major calorie deficits between what I was able to consume and what I was burning and puking up I knew I was going to need to plan ahead on how to get some calories in me pre-race. So that night after dinner Ty and I ate a snack pretty close to bedtime. Then I put graham crackers in my bedside table to eat when Elise woke up in the middle of the night to feed and then again in the morning. My plan worked perfectly as I felt strong through the entire race and never felt hungry.

Carter and mom were signed up for the mile fun run which was run entirely inside the zoo. We watched them start the race and then ran out to find them along the course but it was crazy packed and I realized we only had 15 minutes to our race start so we needed to head back out into the parking lot where we were to start. We had Elise in the double stroller and the plan had been to give mom the stroller so she could walk around the zoo with both kids during our race. I had tried to find out what the course was for the fun run but there wasn't a course map anywhere. So by the time we realized it was a point to point course with the finish at the far back end of the zoo, it was too late to decide where to meet as mom was already off and running. I found the finish and it was a crazy, congested mess. Poor Ty tried to find mom and was unable to so he ended up starting the race over 2 minutes late and ran with the stroller. 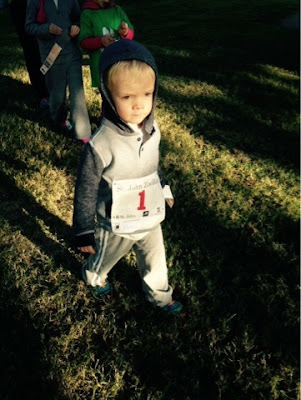 Dad, Jeremy, Thomas, and I all headed out toward the starting line together. We found a restroom inside the zoo that no one else knew existed so we didn't have to wait in line at all. When we headed to the race start I saw elementary-aged kids at the very front and we were right behind a guy and a girl wearing a giraffe and zebra footie pajamas. I knew there was no way they were going to be running fast enough that they wouldn't be in our way so we moved in front of them and I was right as I saw them finish over 10 minutes after I did. The race start was horribly congested as there were far too many slower runners up front. I'm talking runners who stopped to walk within the first half mile who were lined up at the very front. It was ridiculous! I spent most of the first mile weaving around and passing people but after that it thinned out quite a bit. My plan was to go out in around 7 minute pace and try to hold onto that as long as I could. I hit the mile mark in 6:52. Going into the 2nd mile I wanted to maintain pace as much as possible. My second mile is typically my slowest and I wanted to keep from slowing down too much. I was pleased when I went through the second mile in 6:58. That was the least I've slowed down during the second mile of a 5k since staring back running after Elise's birth.

As we started the third mile we went around a corner with a water stop and then after a short straightaway headed into the zoo toward the finish. Around this time a woman pushing a stroller went rolling past me. She was really trucking and at first I thought about going with her but I had found a really great rhythm and I could tell she was running much faster than I was. I was pleased to also go through the third mile in 6:58. Up until the last half mile the course had been exactly the same as previous years so I expected it to continue to be and was preparing to unleash my finishing kick but was sure the course was going to be long as we hadn't run up the large hill I remembered toward the finish. But then I turned a corner and I saw the finish line right ahead. The clock next to the finish line was ticking toward 22 minutes so I really pushed to the finish so I could be under 22. I was able to sneak under 22 with an official finishing time of 21:54. I looked at my Garmin and saw the course had been slightly long at 3.16 miles. My average pace was 6:56 so when we got home I put my pace for a 5k distance into a pace calculator and it said my finishing time would be 21:32. 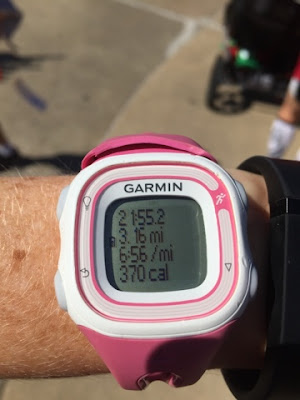 I was really pleased with my time. I had hit both my goals, running 7 minute pace (well actually under) and finishing in under 22 minutes. As I was walking over to watch Ty finish a man stopped me and told me he had been running behind me and had been very impressed with my form and my rhythm. He said he was trying to catch me but I never slowed down and just stayed right on pace. He added that I looked so strong and it was such a nice compliment to hear. After talking with him for a while I realized he had been one of my college teammate's coaches in middle and high school. The compliments meant even more then because he has coached sub-5 minute milers, sub-18 minute 5k runners, and some really talented half and full marathoners. So that was a nice little boost of confidence to add in with my new post-Elise PR.

I headed out for a cool down inside the zoo while everyone else headed over to the area where food was and awards would be held. There were bounce houses for the kids and Carter had a blast. It was the perfect temperature for the animals to be out and about playing. The air had a slight chill and it was in the low 50's. I got to see giraffes, rhinos, lions, tigers, African painted dogs, and tortoises on my cool down. One of my favorite parts of this race is doing my mile cool down inside the zoo while looking at the animals. This race continues to be one of my favorites. Running inside the zoo during the race really isn't very exciting because I'm always so focused on the race and my pace that I never notice the animals, but the cool down is where it's at. I slowly lope along while watching the animals do their thing. I met Ty at the finish and we walked over to the food area. I was really impressed with all the food they had this year. They had some of their sponsors come in and each sponsor had a table of food from their restaurant. There were bagels, yogurt, granola, dried fruits, cookies, more bagels, coffee, lemonade, and sweet tea. I ate so much food I was actually full which never happens after a race! 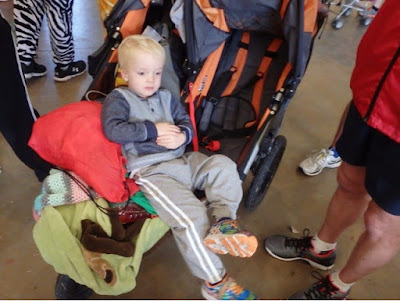 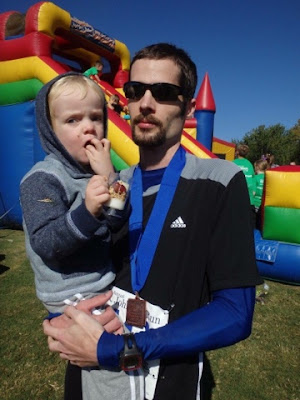 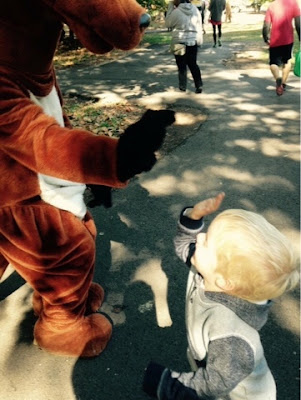 We stayed for awards and came out with quite a few medals. Jeremy was 2nd in his age group and 3rd overall with a time of 19:25. I was also 2nd in my age group and 3rd overall female. I was 18th out of 934 total finishers. Dad finished 2nd in his age group and 37th overall with a time of 23:10. Thomas was next finishing in 23:37 which put him 43rd overall and 6th in his age group. Ty ran pushing Elise in the double stroller and finished in 31:03, good for 257th overall and 16th in his age group. The first year we ran this race we missed the start and I started over a minute late. Going off gun time I was 4th overall female, but chip time I was just a few seconds behind the top overall female. Mom was bummed because they had goodie bags for the top 3 overall finishers and she wanted to know what was in it. Last year, pregnant with Elise, I was again 4th overall female and narrowly missed a top 3 position. This year I finally made the top 3 finishers and they gave out medals instead of goodie bags. So I guess we'll never know what they had in those bags! After awards we enjoyed walking around the zoo seeing animals. Finally Carter got so tired he laid down in the sun pretending to be a snake so we decided to head home. 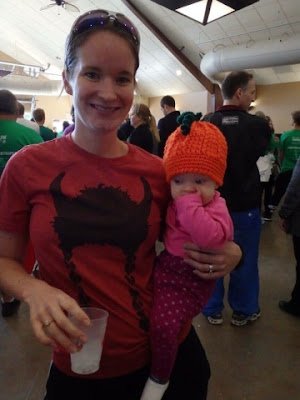 Posted by Liz Runningmomma at 7:44 PM