This is where we are right now. Elise is teething and struggling hard with it! Carter is running a temp and exhausted. Ty and I ran a half marathon yesterday morning along with my dad and brothers so we're tired, achy, and sore. Plus so hungry! I have a partially finished post about our pumpkin learning theme and am itching to write about the half marathon while it's fresh in my mind, but that's just not gonna happen. So I'm going to leave you with some randomness and call it a day.

Saturday night, the night before our race, Elise woke up around 8:30-9ish and didn't fall back to sleep until 10:40 and that was on my chest with Ty in bed with Carter. Last night she woke up right as we were heading for bed and I was up with her until midnight. I was exhausted from the lack of sleep the night before combined with running 13.1 miles that morning and hitting a record 36,820 steps that day. So finally at midnight I just put her down beside me in bed and let her cry while I tried not to cry defeated years myself when in came Ty to the rescue. He took her to rock in the recliner with him and I got to sleep for about an hour before going back in to relieve him and thankfully Elise slept the rest of the night. Little miss was crying a lot this morning so I decided to get her some Tylenol because I assumed this mess is teething as this is how Carter man responded to teething. On my way Carter yelled in to me, "Sissy needs medicine!" Such a sweetie. Afterward we all sat down to read some books. Carter was sitting on the arm of the chair with his head on my shoulder and I was nursing Elise. When I finished the stack of books I told Carter I would get some more when sissy was done eating and he said that was fine. As she finished eating I noticed his breathing was heavy so I peered at him to find him sleeping at 11:00! I pulled Elise onto my chest and she fell asleep. So there I sat with no phone, no book, just my two babies and some amazing snuggles. I drifted off for a bit and then woke up and just soaked up the sweet snuggles. They both napped on me for 2 hours. The way Carter had his head on my shoulder forced my neck into a weird position so my neck and shoulder are still sore but it was so worth it! Those sweet snuggles are the best thing this world has to offer! 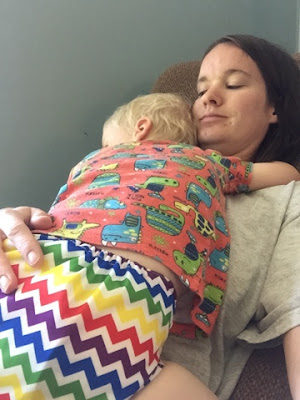 I took Carter's temperature when he woke up and it was over 100 degrees so I let him pick out a movie to get him to rest. After the movie, presumably due to Motrin, he was feeling much better. He really wanted to go on a walk to the park so we did. But in retrospect we probably should have stayed home because while I was in feeding Elise, Ty came in looking for Carter. We found him asleep on the couch with Big Al on top of his head. Poor guy!
We'll see how tomorrow goes, but I'm guessing I won't get to posting if my babies continue to need me in the way they have today!
Posted by Liz Runningmomma at 6:27 PM