Taking Our Babies On A Walk

This morning Carter was really enjoying his baby doll. He plays with her from time to time. My favorite thing he does is put on my Garmin running watch and grab the stroller telling me he's going for a run as he takes off through the house. This morning he was all about his baby. He put her in her stroller and was walking all over the house. Then he told me he was taking her to the park and I asked him if he wanted to take his baby on a walk to the park by our house while I walked sissy in her stroller. He was so excited he immediately ran into his room to get dressed. Normally getting dressed is a bit of an ordeal. When he came back out I stifled a giggle. I figure you have a 50/50 chance of getting your clothes on the correct way as long as your body parts are in all the right holes. He had managed to put not only his shirt but also his shorts on backward as well as his shoes on the wrong feet. I looked at him and instead of saying anything about his clothing, just said, "Okay, daddy, are you ready to go?" To which he responded with a huge grin and a giggle. I could tell he felt like such a big boy! He told me he needed to get a mimi (banana) snack for his baby to have at the park. He also asked to take Harper with us and informed me he had one hand to push the stroller and the other to hold Harper's leash. Thankfully it didn't take him long to realize he needed both hands in order to push his stroller because I wasn't giving him the leash!

Watching him walk to the park pushing the stroller was the absolute cutest! He was so careful to walk right up next to the curb to keep his baby safe. He even wanted to walk up in the grass but realized how hard it was to push the stroller through the grass. Maybe now he'll understand what I mean when I explain that I slow down in the grass because it is harder to push the stroller. When we got to a curb he very carefully lifted the front wheels up and onto the sidewalk and then the back wheels, just like he sees me do! Sometimes I need those reminders that he is always, always, always watching and listening to what we say and do will pick things up, good or bad, without us even meaning for him to! 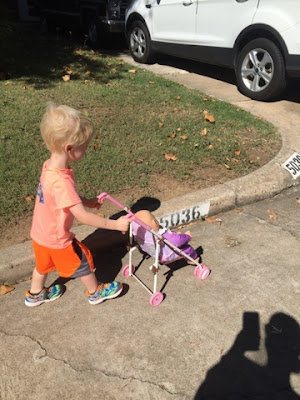 When we got to the park he informed me his baby had a dirty diaper and got to work changing it as I laid out a blanket and put Elise down to play on it. He was so sweet and gentle changing his baby's diaper and putting her in clean clothes because "she got poop on yem." Then he laid his baby down next to Elise and took off to play, only to return moments later to take his baby to play with him. My heart melted as he sat in the wood chips with his baby in his lap, handing her wood chips and pretend playing with her. Then I watched as he carried her up the ladder and was very upset he accidentally dropped her. After he dropped her the rough and tumble came out as he put her down the slide and then went down behind her, knocking her off the end. Although he did stop to wipe the wood chips off her bottom. 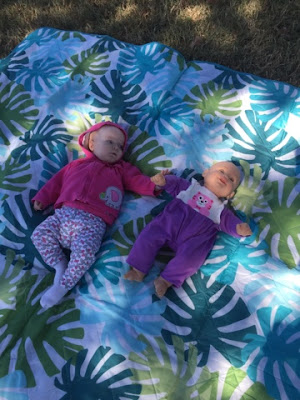 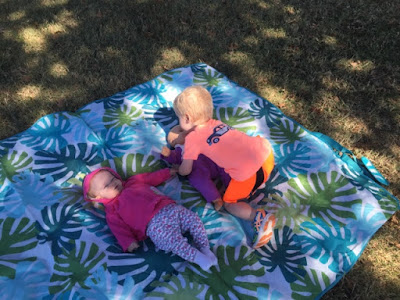 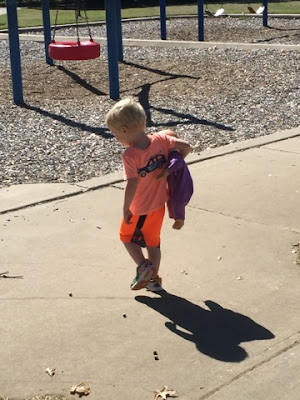 Once he'd played with her on the playground for a while he brought her back over and said he wanted our babies to play. I had the doll play peek-a-boo which he loved! When our timer went off saying it was time to go, Carter rushed over and very gently put his baby in her stroller, taking off down the sidewalk. It was such a fun, little morning outing and I was so proud of how sweet Carter was with his baby. I could tell he was proud and felt like such a big boy too. Every person or car that passed, he stopped and waved with a huge smile on his face! He is such a sweet brother and he will make a great daddy some day. 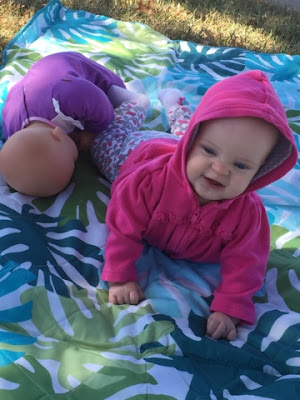 Posted by Liz Runningmomma at 12:29 PM