The Twilight Thriller 5k is one of the most highly anticipated races in our household. The race is Halloween themed and encourages runners to wear costumes. The first year we ran it Ty realized there was a costume contest and got serious about his costume for the following year. He won it that following year (2012) as a gnome with a giant hat. The next year he decided to incorporate the stroller and he and Carter won as pilots with an airplane stroller. Last year he and Carter were engineers with the stroller made into a train. Check out pictures from each year in the post I wrote about last year's race here. This year Ty was excited to tackle the challenge of outfitting the double stroller and decided on a pirate ship. He and Carter were both pirates and Elise was a mermaid. I rummaged through my Halloween tote, pulling out an old pirate costume I had from college. We entered the contest as 3 pirates and a mermaid. Ty again impressed, winning the contest for the 4th year in a row. Our prize was 3 caramel apples which, although I can attest were delicious, Ty does not like and a bag of popcorn coated in white chocolate which Carter immediately grabbed. 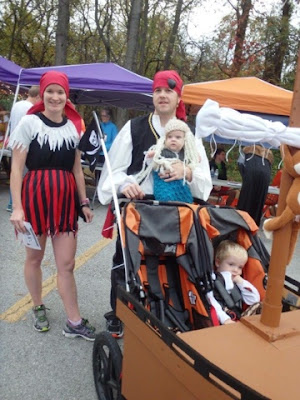 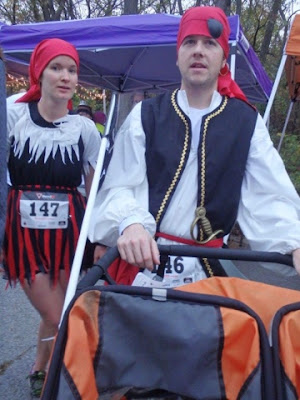 Walking toward the race area and seeing the reactions the stroller was receiving was so much fun. Then we were greeted by spooky Halloween themed music including songs from The Nightmare Before Christmas and the theme from The X-Files. I started getting really excited for the race and was pumped up. At the zoo run a few weeks ago I had pulled out 6:56 pace good for 21:55 on a slightly long course that equated to around a 21:30 on an exact course, but when are the courses ever exact?! Going into this race my goal was to run faster than the zoo run. We've run lots of races on this course so I knew it was slightly short at around 3.05 miles. I figured with a really good race I could sneak under 21 minutes for my race time and then finish out to the full 3.1 miles to see what I could run for the correct distance. 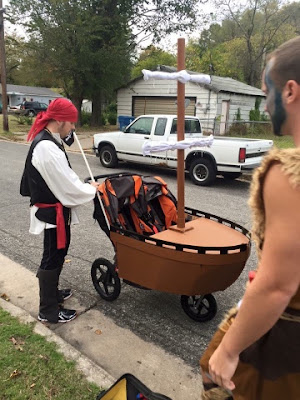 We lined up farther back than we should have but it worked out okay because everyone went out really quickly right off the start. I felt really strong and checked my pace a few times in the first mile. I was reminded that my Garmin struggles a little bit on the trail since it's in a highly wooded area. At one point I looked and it said I was running 6:20 pace. When I looked again it said 7:20 pace. I was then forced to run more on feel than pace that first mile which may have been a good thing as my goal was to hit 6:55 pace for the first mile but I went through it in 6:49 and felt great. Had I held back to 6:55 pace it may have been too slow.
By the turn around point I had worked my way up to 5th overall female and could see a pack of 4 girls a ways ahead of me. My plan was to hold the pace as steady as I could, not slowing down from the pace of my first mile if I could help it. My bandana had loosened and was starting to slide around so I pulled it off and planned to toss it to Ty when I passed them going in the other direction. I got really excited when I could see the giant mast coming toward me in the distance. I cheered for Ty and Carter as I tossed my bandana to Carter who was excited to see me. Then I got down to business and started focusing on the pack of girls ahead of me. I could tell I was slowly closing the gap and catching up to them. I went through the 2nd mile in 6:55 and felt like I could definitely pick up the pace. I was excited knowing I would for sure beat my zoo run time.

Going into the last half mile I caught up to  the pack of girls who at this point had fallen back to 3 with one girl ahead of them and looking much stronger than the rest. I pulled up next to the first girl with about a quarter of a mile to go and she went with me. When we turned the corner to where we could see the finishing arch with glowing lights in the distance I kicked it up a notch and hit mile 3 in 6:51. We came off the gravel trail onto the paved parking lot and I was really kicking it in. The girl pulled up beside me again so I took off in high gear and pushed past her to the finish. I had planned to finish out to 3.1 miles but the sprint to the finish left me tired so I decelerated and finished out the 5k slower than I could have. My official finishing time was 20:44 with my full 5k at 21:16. I was extremely happy with my time. My goal has been to run under 21 minutes in the spring and having run a 21:16 already I'd say that should be easily attainable! 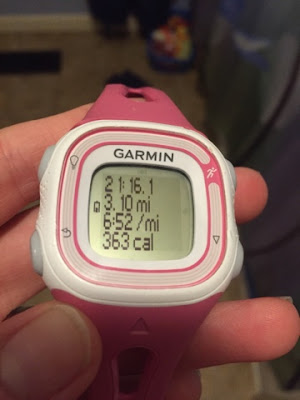 Jeremy led our group with a 9th place overall finish. He was dressed as a knight and ran the entire race with his sword in one hand while holding his cape in the other because it was so long it was getting caught up in his feet. He finished in 19:30 which put him first in his age group. I finished in 20:44, first female and 15th overall. Dad was next running 22:51 which was good for 3rd in his age group and 38th overall. Thomas finished in 23:07, running with a club in his hand and taking 40th overall and 3rd in his age group. Ty started all the way at the back and spent the entire race weaving the ship through runners. He finished in 31:00, 7th in his age group and 146th overall. When I was finished I jogged a cool down out to Ty and finished the last half mile with him. Carter wanted to get out and run so he finished the race running, holding Ty's hand. Mom walked the race in 54:45, 255th overall and 21st in her age group.
It was cute because Carter remembered doing the summer race series at this course and was telling me he wanted chocolate ice cream when he finished. Since it's usually a chilly race they have hot chocolate rather than ice cream which appeased him. He also enjoyed a cookie and some cheese puffs after the race. Another fun race and after party in the books! Now we're looking forward to our next 5k on Halloween morning which also has a costume contest, followed by trick-or-treating in the evening!
Posted by Liz Runningmomma at 1:06 PM