Two more months until Carter turns 3! It is so crazy to think it has been 3 years since he came into our lives. His presence has made our lives so much happier and he brings us so many smiles. We've been lucky enough to have him in our lives for almost 3 whole years! Sometimes I look at him and he seems so grown up. Other times I look at him and notice his Elmo fuzzy socks and am reminded what a baby he still is. My baby. My sweet, little baby who still wants me to lay in bed with him and rock him to sleep when he's sick. He is still the sweetest little cuddler and pretty much anytime I ask for a kiss he responds with, "Sure." That's something he's picked up recently is he says sure all the time. Are you ready for a bath? Sure. Do you want to take Harper on a walk? Sure. Are you ready for dinner? Sure. He cracks me up! It's the cutest thing to hear come out of an almost 3 year olds mouth! 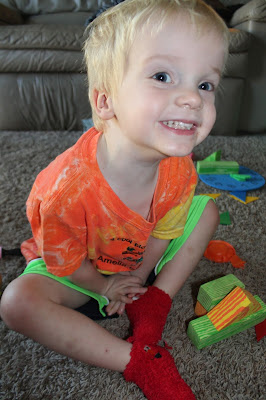 I've been so impressed with Carter's social skills this month. I know it's all stuff we've been working on and talking about, but he's doing it all on his own now. We'll be out somewhere and he'll run over to a kid and say, "Can I play with you?" What breaks my heart is when the other kid ignores him so he repeats himself and still they ignore him. One day he came running over to tell me he asked a girl if he could play with her and she said no. I told him he better find someone else to play with then. Responding with no doesn't bother me, it's the ignoring that does. I'm not sure why, I guess just because it's rude. He tends to prefer playing with kids who are older than him. Typically he finds a girl who is a couple years older than him to play with. He has his tried and true buddies he loves who are a year younger than him, but for the most part prefers older kids. He likes to lead in games but also doesn't have a problem following someone else's lead. If you ask him who his best friend is he'll say Landon, Hayden, and Grant. Sometimes he also throws Brylee or Walter in there, depends on how long it has been since we've seen him/her. Landon, Hayden, Walter, and Brylee are all older while Grant is a year younger.

A trick he tried for a while before realizing it didn't work was telling me other people said he could do something when I told him no. For instance, we were at my parents' house and he wanted a 2nd apple juice. I told him no, he'd already had one. So he responded with, "Oma said I could." So I told him we'd check with Oma and she explained what she really had said. One day he wanted to brush his teeth again right after brushing them but I knew he just wanted to eat toothpaste because he'd tried to swallow his toothpaste the first time. I told him once was enough so he said, "Uncie Taco say I need brush my teeth again." I was cracking up! Something else funny he's started is when I tell him good job he'll respond with you're welcome! If we can't find something he'll tell me, "Daddy find it." Somehow Ty has a knack for finding Big Al when he goes missing. And he goes missing a lot. Carter has started smuggling him places and being busy loading Elise in the car, a lot of times I don't notice. He took him into a friend's house last week for a playdate and forgot him. Half way home he remembered, I didn't even know he'd taken him inside, so I turned around to go get him. 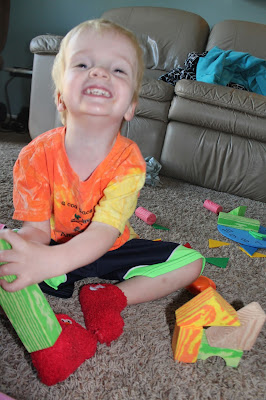 Getting out of the house this month has been ridiculous. No matter where we are going and how excited Carter is to get there, it's a big ordeal. He'll talk all morning about how excited he is to go to the zoo, the aquarium, storytime, Uncie J's house, you name it. Then when it's time to get ready so we can leave he refuses to put underwear on, shorts on, shoes on, whatever. I've tried starting over an hour before we need to leave but he's still uncooperative. I always give us at least an extra 30 minutes to get ready and sometimes it's not enough. I'll tell him it's time to go and he'll say, "Not yet," or "In a minute." I set timers and it's still a struggle. Ugh! But that's really his most difficult thing right now so I'll take it.

It's so cute to see him do things I do and hear him say stuff the way I say it. He'll be playing with his cars or pumpkins or whatever and then gleefully say, "Let's count them." Then he very carefully counts all of his items. I'll randomly catch him singing, "Harper always making mommy's day," or sissy or whoever he decides to include. It's so cute because it's part of the song I sing to Elise. I love hearing him talk to Elise and say things I would say. If she wakes up from her nap and cries he'll go running in while yelling to her, "I'm coming, sissy!" He'll also tell her, "I know, baby, I know," when she's crying. He loves to sing and sings a lot. His favorite right now is Wheels On the Bus. He likes to sing where the babies cry and the mommies hush them. His other favorites are the ABC's, Twinkle Twinkle, and Monkeys Jumping on the Bed. 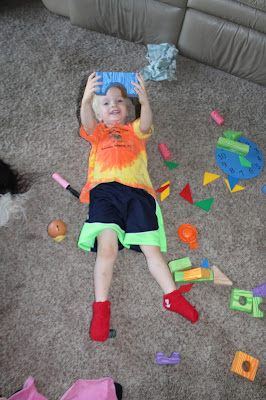 I feel like we've finally hit our stride with potty training. He still has accidents here and there, but not nearly as frequently. I think the big break through came with him being able to hold his bladder for longer. Before I had to take him to the bathroom every 30 minutes when we were out somewhere and even then sometimes didn't catch it in time. Now he can go somewhere, potty, stay dry for 2 hours, and then potty again before we leave. It makes a huge difference! It's less stressful for me and less frustrating for him. It makes me wish I'd waited until he could go longer between pottying. It's still the cutest walking by the bathroom and seeing him standing at the potty. Most of the time he doesn't even tell me or ask for help, he just takes care of business and then I hear the toilet flush. He also prefers to wipe his own bottom. I always ask to check to make sure he got all the way clean and sometimes he'll tell me, "This was a clean one." It totally cracks me up! Something I will miss as he gets older is his shirt being tucked in in the front and his shorts being pulled sideways and wonky from him pulling them back up on his own. It is the cutest and makes me smile every time.

Mr. Independent is still all about dressing himself, hence the wild outfit in pictures. He likes to pick out thermal shirts with large neck holes so they are easy to put on. He also likes to wear long sleeved shirts with shorts. His favorite shirt right now is a dark green thermal long sleeved shirt with dinosaurs on it. He's convinced it glows in the dark but I am almost certain it does not. He also picks out his fuzzy Elmo socks every time and they make it hard to get his shoes on so he cries as he tries to shove his feet into his shoes on his own. After a few minutes of tears he allows me to help him. He also likes to pick out my shirt for the day and anytime it's clean he picks this same plain pink shirt I got in the Target clearance section. If we don't have any plans for the day and I ask him what he wants to do he either asks to go to the zoo or the akarum (aquarium). Funny fact for you, he loves Harper and is too rough with her, but is scared of Skippy. One morning I was in the bedroom getting ready for the day while Elise was still asleep and heard him yell no. Then he yelled, "No, Skippy, no meow! I don't like that!" Next thing I knew he was running into our room. Silly boy! 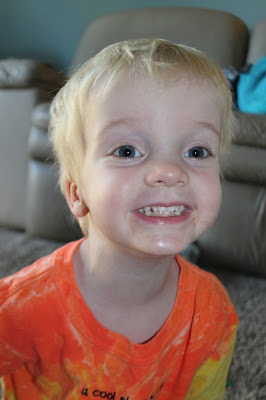 Carter loves Elise so much! He still gets jealous from time to time and anything he sees me do with Elise, he wants me to do with him. I'll put Elise in my lap with my legs out and knees bent with her head by my knees so she's leaned back but almost sitting up. Then I rock back and forth and sing to her. I usually do "All Around the Mulberry Bush" and bounce her up when I say, "Pop goes the weasel," or "Ring Around the Rosey" and drop my knees down on "All falls down." If Carter is awake he asks me to do it to him and his little legs wrap around my side while we do it. It's so funny because he loves it so much. If Elise is reaching for a toy but can't quite get it Carter will hand it to her and say, "Here ya go, sissy." When he's playing and looks up to see her watching him and smiling at him, he'll stop what he's doing and lean over to kiss her. He kisses her a lot! He also loves to feed her and laughs so hard at the faces she makes as she eats. It's the sweetest thing to watch! When Elise wakes up from naps he goes running in to get her, telling me, "I go first," while yelling to Elise, "We're coming sissy!" If we are out somewhere and kids or adults are pointing out how cute Elise is, he'll say, "Her name is Sissy Elise." If they don't respond he'll say to me, "Tell yem (I love the way he says them) mommy, she's sissy Elise." It has been fun to see them interact more and I know it will only get more and more fun. 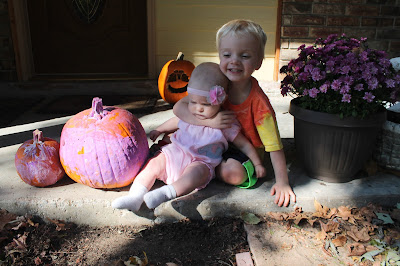 Posted by Liz Runningmomma at 7:16 PM