"I'm not the whole thing excited. Just a little bit."

"I really isappointed I not see giraffes."

After yawning, "That means hurry up because Carter's tired!" 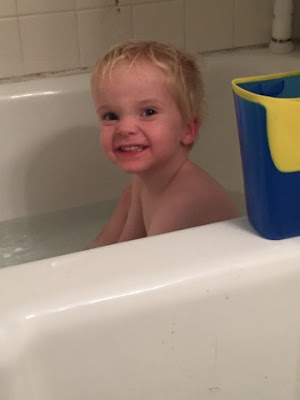 His favorite right now: "Carter have a question for you."

Carter: I was afraid you were gone!
Me: Where did you think I went?
Carter: In sissy's gina (meaning vagina). Or in your gina.

Another favorite while on the potty: "Give me some privacy!"

He got on his bike and as he rode off he said, "I going to Oma, Opa's house. You pick me up to work."

We were talking about an upcoming race where he was signed up for the fun run.
"I'm gonna walk and run at the race. Gonna get some exercise."

Carter: You having more babies right?
Me: What makes you say that?
Carter: Because you want to eat the babies.
I guess we know how Carter thinks babies get in their mom's belly.

While on the potty looking at his penis and pushing it down: "Go! Come on!!!"

Me: Did you get a mosquito bite?
Carter: Yes, mosquitoes love Carter!

While laying next to Elise looking at her, "Sissy have big eyes!"

I asked him to repeat something in the car because I couldn't hear him, "Mommy, hear Carter!" 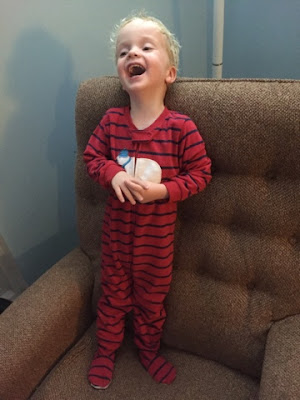 "I an herbivore animal and a boy. I a boy giraffe." 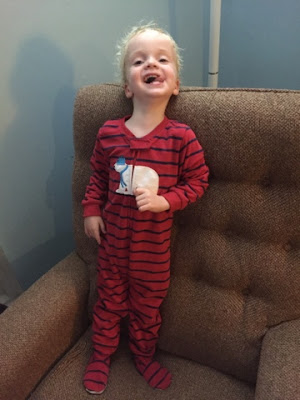 We were at the aquarium with his buddy, Landon, and it has some touch tanks.
Landon: Don't touch that!
Carter: Mommy, can I touch this?
Me: Yes, you can.
Carter: Mommy say yeah!

Also at the aquarium, "Look, big fish! Let's eat them!"

"Think what I am." while pretending to be an animal. When I would guess correctly he'd say, "Good!"

Harper's skin has been really irritated and itchy lately. After looking at her skin:
Me: Oh, Harper, poor honey bunny.
Carter: No! Carter your honey bunny!!!

"I'm going to work. I wearing my helmick." while riding his bike around the house.

We were playing Pigeon Dominoes based off the Mo Willems books.
Carter: What the pigeon saying? while pointing to a picture of the pigeon.
Me: I don't know. What do you think?
Carter: I WANT A COOKIE! And the duckling say, all get cookies!"
Spot on with the book, "Duckling Gets A Cookie?!"

Carter: Which one's hot water and which one's cold water?
Me: Why do you want to know?
Carter: Because I love you!
The boy knows how to work it!

While driving in the car Carter started yelling.
Carter: I am not!
Me: What?
Carter: A sun's in my face. That's why I'm screaming. That's what I'm screaming about!

"Watch me whoop whoop. Watch me na na. I don't remember the words. What's those words?"

I was in the other room and heard Carter yell, "Harper puked!" Before I got in there he yelled again, "Harper cleaning her mess." Bet you could guess how she was cleaning it, yep, eating it!

Carter: I want Harper out of this room!
Me: Why?
Carter: I don't want her breath in my face.

As I was getting out of bed in the morning and he was still wearing his overnight diaper...
Carter: I have a secret...
Me: What is it?
Carter: It's in my diaper. It's poop!

"She breath tooted in my ear." He meant burped.

We were getting ready to go to my parents' house for the weekend and Harper was getting upset while I loaded the car.
"You are going with yus! You can't be sad. No reason to cry. Dogs don't cry."

"I don't want Zuma to sit by me!" while riding in the car.

"Maybe pretend your phone is your flashlight. Then you can see."

"I put sissy's blanket in her crib. It was big work!"

Videos is pronounced wiggos and he uses both to mean any plural number. For example: Harper, Zuma, and Quinn were all laying on the floor. They both liked it.

I was in the kitchen cooking and Elise was in her jumperoo. I heard Carter saying, "Whee, it's a carousel." I looked over to see him very slowly spinning Elise around in her jumperoo. She was smiling the biggest smile, it was so cute!

Posted by Liz Runningmomma at 7:12 PM