I had so much fun putting together a post about what activities I did with Elise during her first 3 months, I decided to do another one for her next 3 months. Just these past couple months I've been able to find more ways to incorporate activities for Elise into Carter's weekly learning themes which has been a lot of fun. Some of the things I've done with her were part of a learning theme for Carter. I'm not sure whether I'll do another post like this for 6-9 months or if I'll just incorporate all of her activities into Carter's learning themes. I'm leaning toward just putting her activities in with Carter's learning theme posts. Our library has a really neat Build a Reader program. As part of the program they have pamphlets with information for parents on how to facilitate early reading. Inside it lists books for parents to read for more information. I checked out 50 Fantastic Things to Do With Babies by Sally and Phil Featherstone. It was a neat book and was nice to look through. A lot of the ideas listed in the book were things I was already doing with Elise which was reassuring.

I looked up the baby development stages and found a list of things babies should start doing from 4-6 months.  Here's what the list looked like:
To facilitate reaching for and grabbing toys as well as manipulating toys with her hands I put Elise on her activity gym frequently. We also handed her toys earlier on and then gradually moved on to holding toys out to her so she could reach for them. Right before she was 4 months old I pulled the jumperoo out of the garage for her to play in. She wasn't quite tall enough to reach the ground so I put a box under her feet. She also couldn't quite reach some of the toys because her arms weren't long enough. We have now moved to taking toys we know are interesting to her and putting them just out of reach so she has to roll or scoot to get to them. I also like to show her a toy and then cover it with a blanket or something she can pull off to reveal her toy, beginning to develop object permanence. She loves to play with balls and other toys. We've given her a variety of items to play with. One of her favorites is to play with the rubber chips at one of the playgrounds we go to. It has been a lot of fun to be able to put her down and allow her to explore. 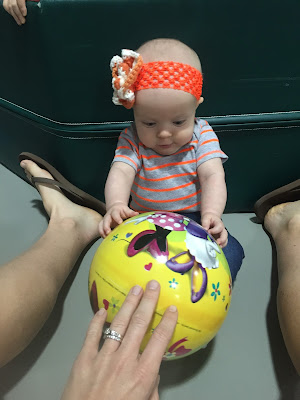 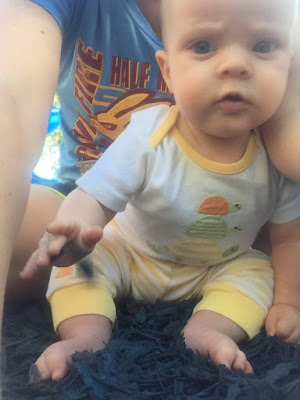 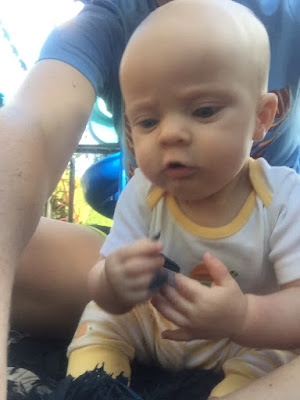 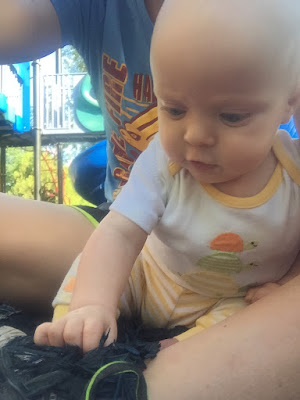 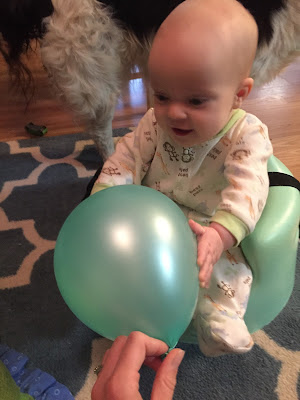 I spent a lot of time with Elise propped on my legs in an upright, almost seated position while facing me so her head was by my knees. She loved to sit like that. I would sometimes sing Ring Around the Rosey and then lay my legs down when I said all falls down. I would also rock her side to side. This was one of the things in the book that I already did but they had a song to go along with the rocking. I incorporated the song into our rocking and Elise loved it! She would stare at me and smile as I sang. Here's the song or at least the version of it I sing, sometimes I don't remember them exactly word for word:

We also played with sand and bubbles for some sensory fun. It has been so much fun for me to find little ways to involve Elise in Carter's learning themes. During summer week I let her touch and feel sand with her hands and feet. Then during bubbles week we played with her by blowing bubbles toward her. We'd pop the bubbles before they got to her yelling "pop!" Then I'd ask her "more?" When she made eye contact with me or made a sound at me, I'd say, "Okay, again!" Then we'd blow more bubbles toward her. 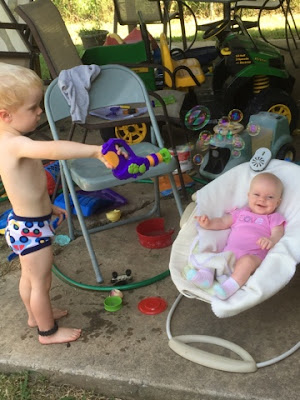 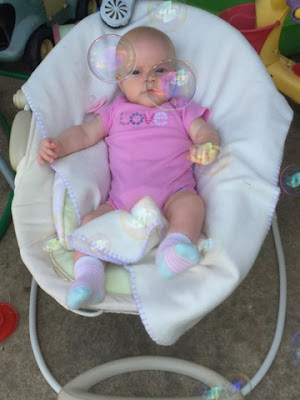 She started getting more interested in mirrors during her 4th month. I started playing a game with her I made up for Carter when he was a baby. I would lean her toward the mirror and then away from it while singing and then bounce her at the end of the song. She sure stared at herself! The song is to the tune of "Who Is That Doggy In the Window?" It goes like this:

Something that was suggested in the book I listed earlier was to make paper plate faces. I drew a happy face and a sad face on paper plates with black marker. Then I taped them to popsicle sticks and used them as puppets. I would put them close to Elise's face and make them talk to her. She was totally unimpressed and just stared at me instead. It was almost as though she was thinking, "I know that's you talking, what are you doing?" 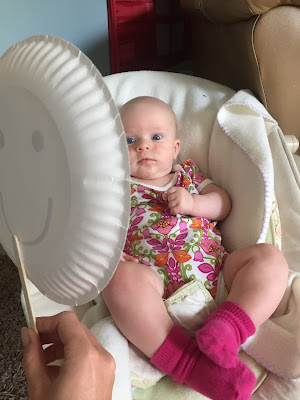 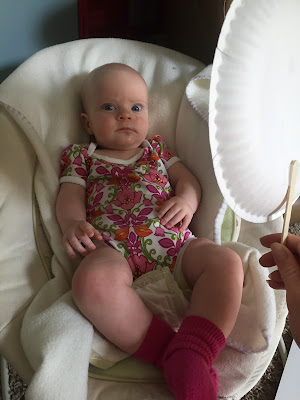 Another way I got her to grab for objects was by playing a game with my sunglasses when we were out and about and had a moment. I would sing "Where are my glasses?" to the tune of Frere Jacques and then pop them off my eyes. Elise would grab for them and laugh. I also put together sensory bins for her. Her first bin was just some random things she could hold: a whisk, a baby spoon, a plastic lid, her crinkle square, and a rubber duck. I would hand them to her and encourage her to grab them. The first thing she grabbed was a whisk and she immediately slammed it into her face. She was quite surprised. We've done a few sensory bins since then and she can now reach in and pull out what she wants. We've also done some other sensory activities such as rubbing her hands in shaving foam to play in it as well as pudding. One time we even put the pudding on top of bubble wrap for extra sensory fun. 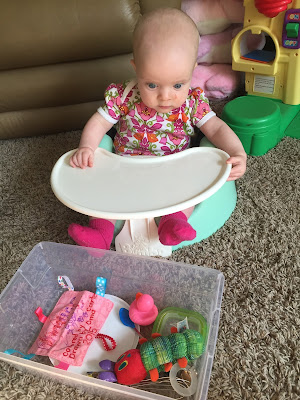 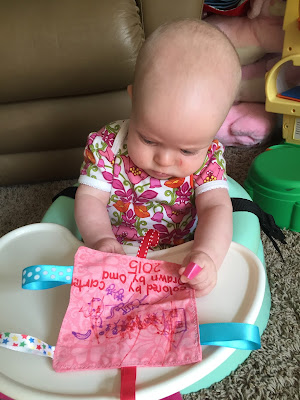 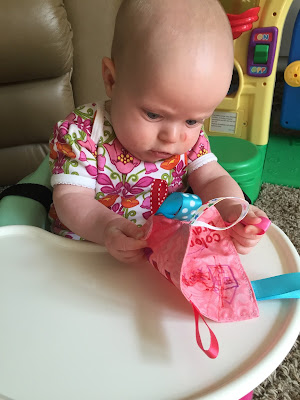 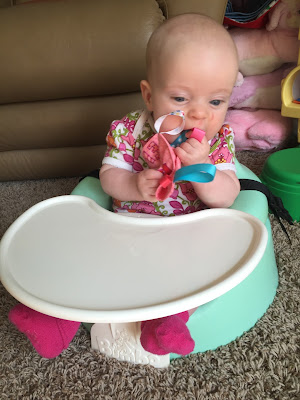 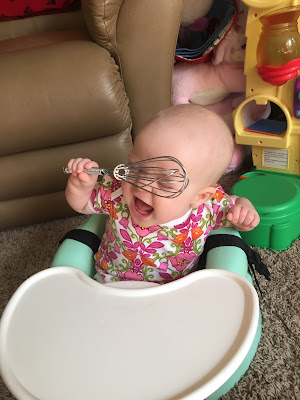 The first time Elise laughed was because I was playing Peek-a-boo with her. I had her laying in my lap with her head by my knees. I would put her feet over my face and then pull them to the side and say "hi". She thought it was hilarious!

To get Elise to babble and attempt to converse with us we talked to her all the time. I like to sing to her a lot. One of my favorite things is to greet her when she wakes up in the morning or from a nap by singing. My favorite I dubbed "Good morning, Elise" and it goes like this: 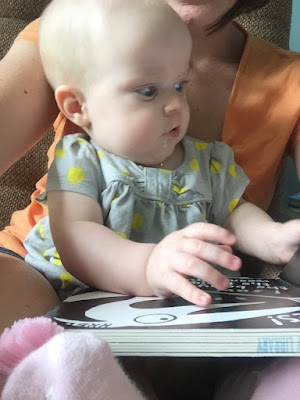 Carry Me Babies Everywhere by Star Bright Books
Baby Sounds by Joy Allen
Wave, Baby, Wave by Anna Nilsen and Jonathan Bentley
Baby Reads by Ken Karp Photography (Little Scholastic)
You Are My Sunshine by Caroline Jane Church
The More We Get Together by Caroline Jane Church
That's Not My Bunny by Fiona Watt
All Kinds of Kisses by Nancy Tafuri
Good Dog, Carl by Alexandra Day
Posted by Liz Runningmomma at 7:06 PM