Woo hoo to the end of the first trimester and welcome 2nd trimester!  I love, love, loved the 2nd trimester when I was pregnant with Carter.  So many exciting things happened.  We found out Carter was a boy, felt him kick for the first time, saw him kick and move my stomach for the first time, heard his heart beat with a stethoscope, not to mention my migraines went away and my energy came back!  I couldn't ever decide whether I enjoyed the 2nd or 3rd trimester more.  I definitely felt better during the 2nd trimester, but Carter moved around so much more during the 3rd trimester which I loved and we could start to countdown until his arrival.  It's all just such an amazing experience.  So I'm definitely pumped to be entering the 2nd trimester already.  This pregnancy is flying by! 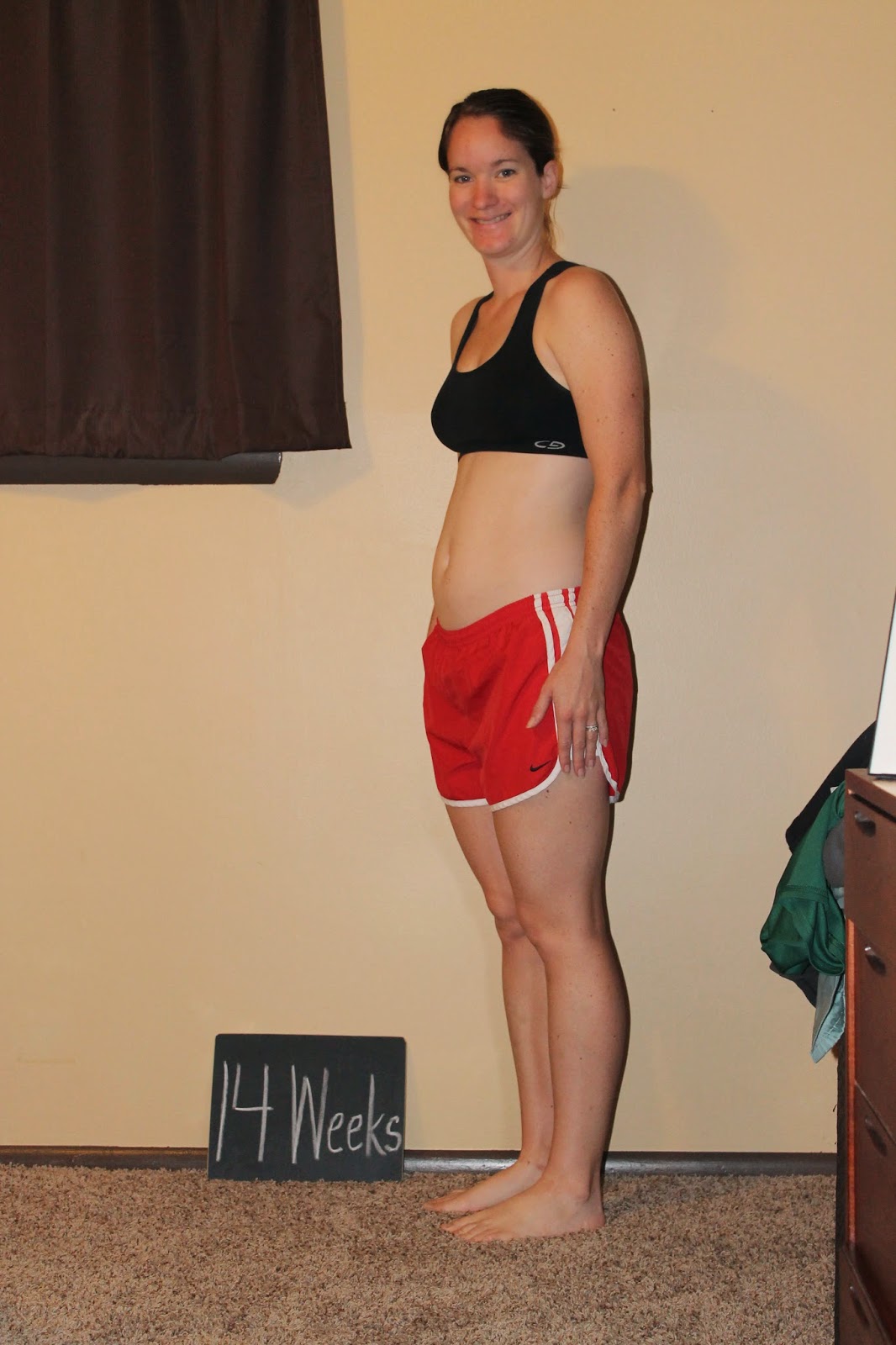 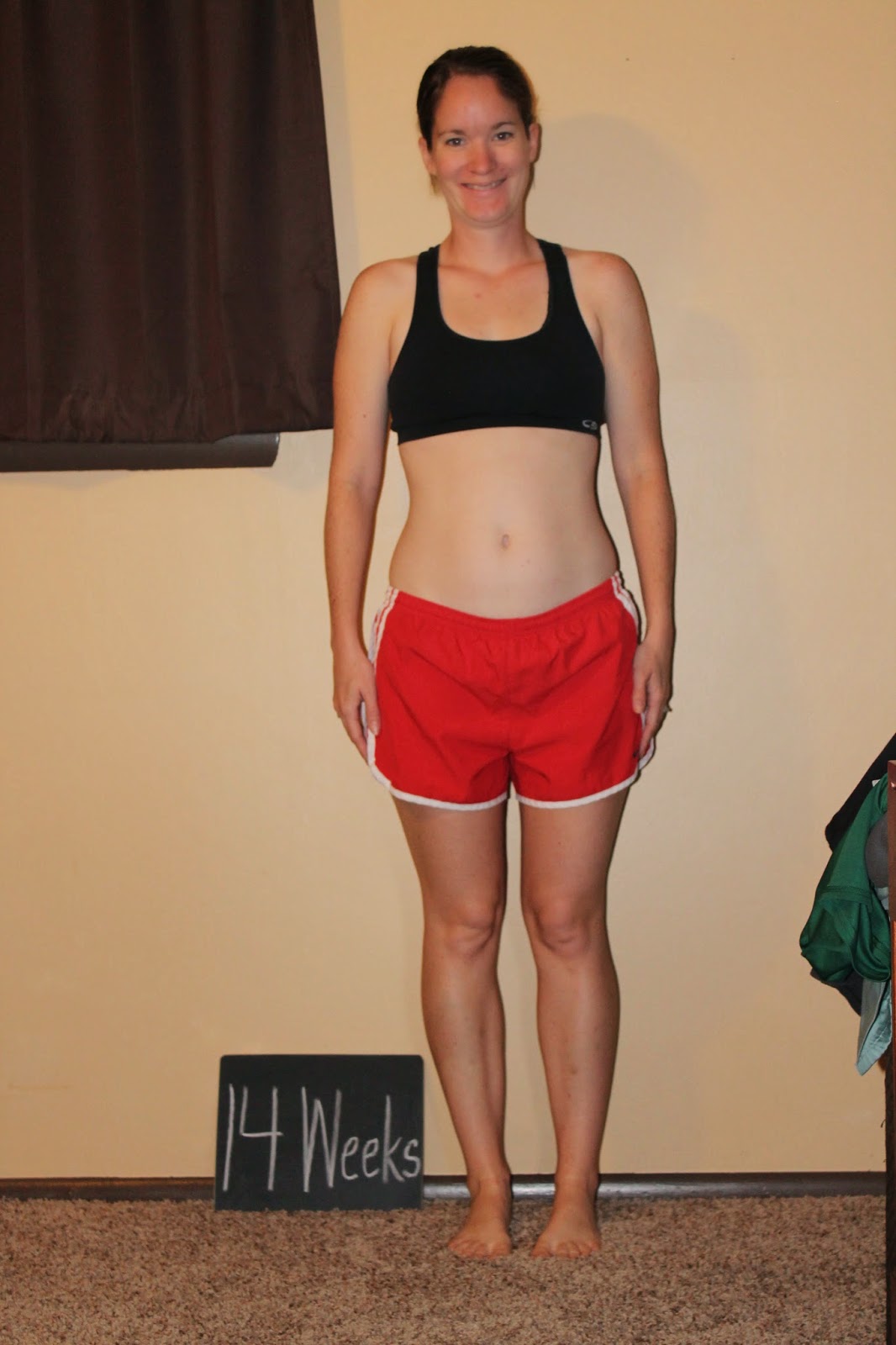 Baby's Size: Baby is the size of a lemon and is probably about 3.5 inches!  He/she is now urinating and can grasp things as well as make facial expressions.

Weight Gain: Still up one pound, so I'd say I have actually gained a pound.  I think that's exactly where I started the 2nd trimester with Carter!

Maternity Clothes: I've hit that point where the hair tie trick isn't quite cutting it, but it's too early for maternity clothes.  If I use a hair tie to close my pants I get cramps because it is putting too much pressure on my uterus.  It's frustrating and I hated using the belly band when I was pregnant with Carter so I'm attempting to avoid it by wearing yoga pants and sticking with my jeans that used to be so loose I had to wear a belt with them.  My mom was in town this weekend and we went to Buy Buy Baby to buy our shower gifts for one of my friends' showers.  We were looking at the maternity section and a sign said buy 3 items, get 1 free so my mom decided to treat me to some maternity clothes!  We picked out a pair of yoga pants, a shirt, and 2 dresses.  It was so exciting and I'm looking forward to wearing them!

Sleep:Thankfully Skippy has toned down his nightly shenanigans and I'm sleeping much better.  I wake up to use the bathroom anywhere from 1-3 times during the night.  Last week I was struggling to fall asleep and if I woke up in the middle of the night I laid there tossing and turning.  This week I've been so tired that I actually fall asleep before Ty which is an amazing feat because I've never known anyone who can fall asleep as fast as he can.  I pretty much lay down and am asleep within minutes.  I've also been taking 30 minute to hour naps depending on the day.  One day I took a 2 hour nap and felt awful when I woke up.

Symptoms: Cramping has returned this week, I think mostly due to my ill-fitting pants.  I've still been dry heaving pretty much every morning and dread brushing my teeth because that typically causes a long drawn out bout of heaves.  Wednesday morning was the worst and Carter stood beside me talking and then spit in the toilet when I was done.  When I get the heaves I get a bunch of bile come up into my mouth and I spit it out.  It's basically like throwing up minus the chunks.  Lovely, I know.

Running: Things started to really click this week.  I had days during the week where I ran 8:30 pace and it felt amazing.  I'm starting to feel really good and strong on my runs.  On Saturday we ran the Zoo Run 5k.  Thomas volunteered to run with Carter so I was sans stroller.  I ran a 5k right around the same timing when I was pregnant with Carter so I thought it would be interesting to see how I compared with this run.  I went into the race figuring I'd be able to run somewhere around 7:45-8 minute pace.  I went out at what felt comfortable and just went with it.  I was shocked when my watch beeped for the first mile and showed my first mile split was 7:24.  I actually freaked out a little bit and decided to slow down during the 2nd mile and if I still felt really good I'd pick the pace up a little bit during the last mile.  My 2nd mile was 7:35 and it felt slow.  My body wanted to go faster so I picked up the pace, but only to what felt easy and comfortable.  My last mile was 7:19 which put me finishing in 23:11.  I was 1st in my age group and 4th overall female (only 2 seconds behind the 3rd place finisher, which I didn't realize during the race).  I was impressed with how fast I ran while still feeling very comfortable.  I didn't realize an average of 7:25 pace would feel so good.  In comparison I ran the 4th of July 5k race between weeks 12 and 13 when pregnant with Carter and my time was about a minute slower at 24:15.

Food Cravings: Still craving fish and I think that will continue until I'm able to satisfy the craving.  It might be a while!  I wake up from my nap really hungry and last week I wanted a breakfast burrito really badly one day so when Carter woke up we walked to Sonic and used a gift card I had to get a junior breakfast burrito.  It was so good I did it 3 days in a row...

Food Aversions: I have conquered all of my aversions except for barbeque and have a sneaky suspicion that I would be able to eat it too, I just haven't tried.  It doesn't sound appetizing to me.

Movement: Getting closer and closer to feeling those first kicks!

Best Moment of the Week: The zoo run was a blast and walking around the zoo afterward with the whole family was a blast.  It was especially fun to hear Carter say tiger over and over when he saw the tiger.  It was definitely his favorite animal during this trip.

Currently Loving: We are half-way to our next appointment and seeing our little precious again!  It's crazy to think we'll be able to find out the baby's sex!  I'm hopeful that we will get good news that my placenta has started to shift as I still haven't had any bleeding.  I'm hoping that's a good sign.

Miss Anything: I suddenly craved a raspberry beer this weekend, but I don't really miss it because I would much rather be pregnant than drink beer!

What Big Brother is Up to This Week: When Carter sees the ultrasound pictures hanging on the fridge, he'll point to them and say baby.  He does all types of hilarious things when I ask him where the baby is including pointing at his own tummy!  We are closing in on the time when my belly will start to pop and he'll be able to see the change.  It will be so cute when he points at my belly when we ask where the baby is!  My Week 14 Bumpdate with Carter. 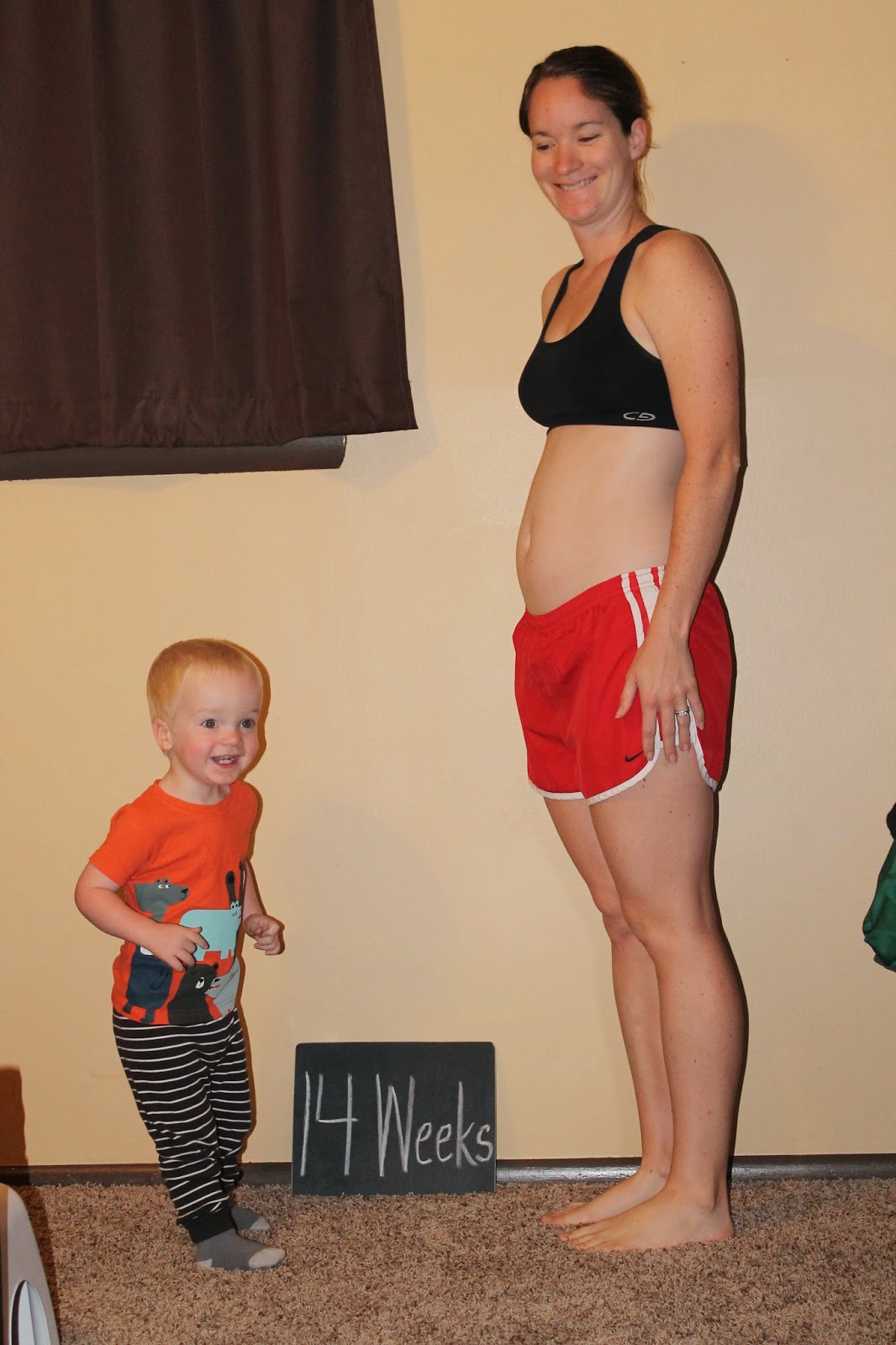 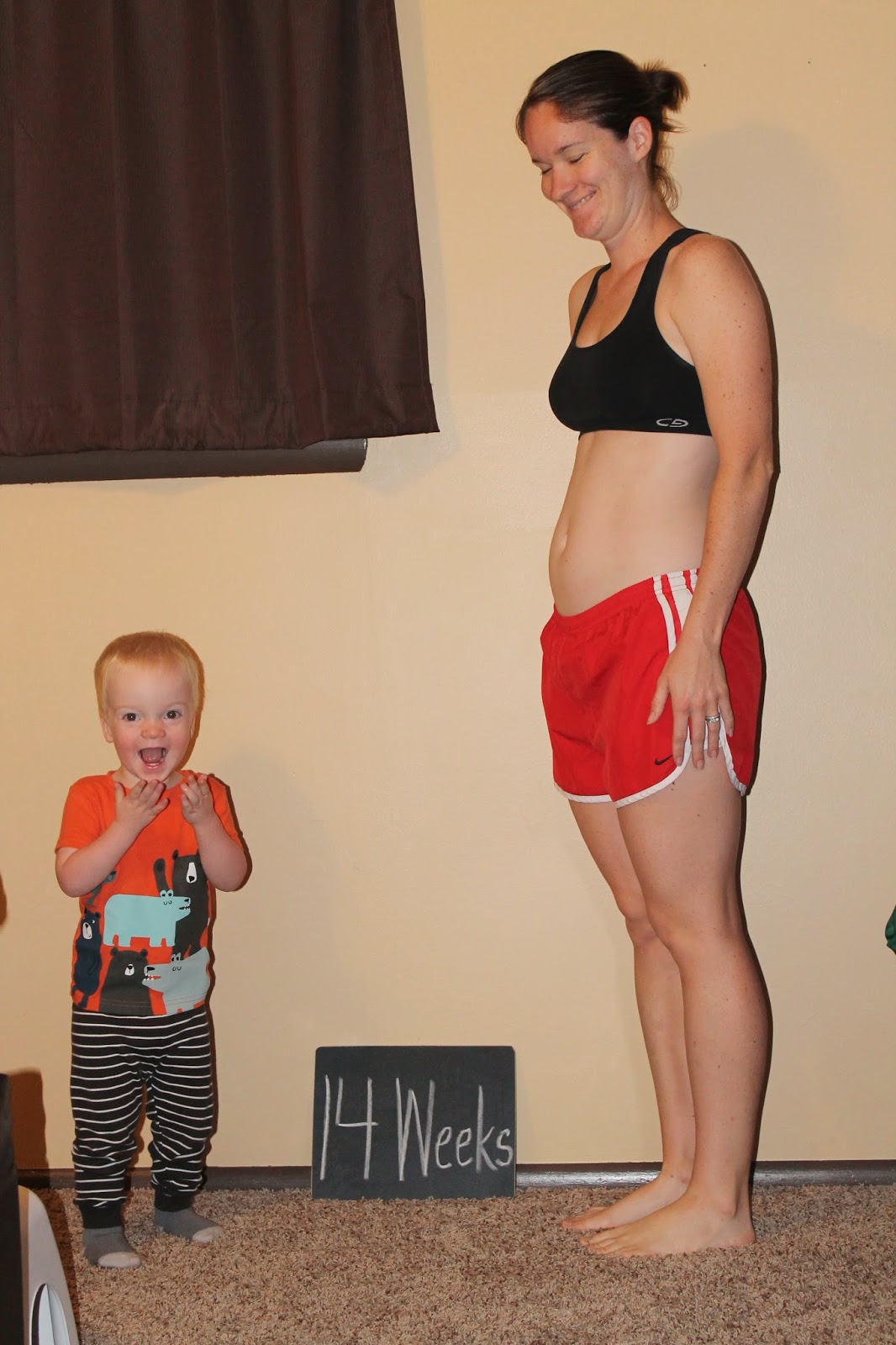 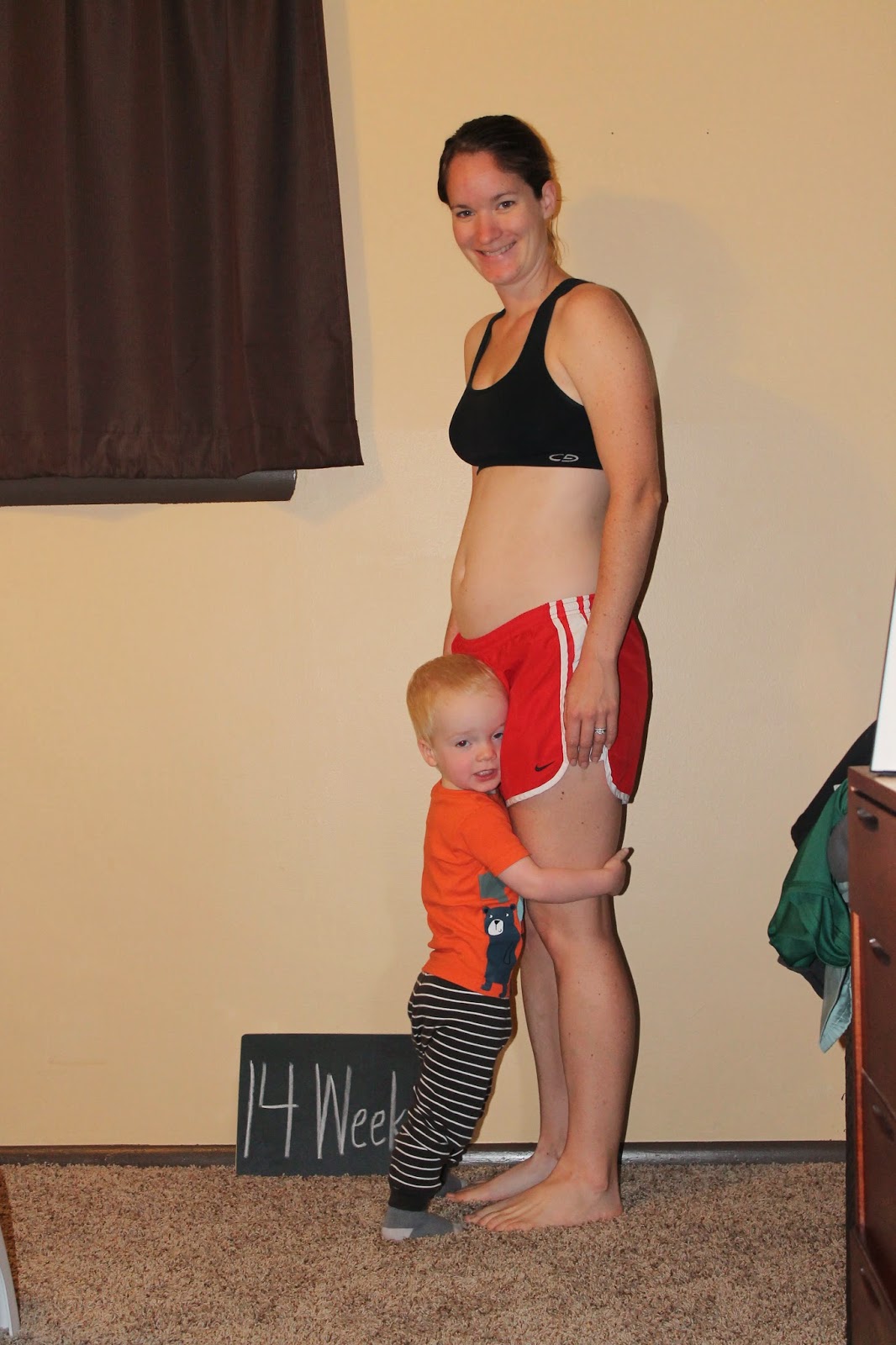 Posted by Liz Runningmomma at 11:13 AM