Today was a mixture of amazing and completely frustrating.  Little Mister was super fussy and wanted me to hold him or walk him around all day.  This past week especially he has been all about momma and will try to fling out of Ty's arms if Ty goes in to soothe him or if he tries to put him down for bed or a nap.  It's frustrating for me and although I know he tries not to let it bother him, it hurts Ty's feelings.  Today at nap time I put Carter down and he instantly started screaming.  By the time I made it into the living room he was already standing in his crib.  So I picked him up and rocked him to sleep (he gets special privileges when he's sick).  The moment his body touched the crib he was screaming again.  We played that game for about an hour before I decided f@#$ it and gave up on nap time.  Once I made that decision things were all good and we had so much fun even though Carter was fussy because he was tired.  I'm leaning toward an ear infection, even though he isn't running a temp, and plan to message the doctor in the morning.

Anytime Carter turns into Mr. Fussy Pants he more than makes up for it with his sweet smile and adorable "cheese face".  Right now he's really big on all the sudden looking over at you and breaking out into a giant grin, wrinkled nose and all.  It doesn't matter what's going on or how many times he does it, I giggle every. single. time.  It's just too stinkin cute.

Before all the no nap shenanigans began Little Mister was all about walking around the house.  He wouldn't stop.  All he wanted to do was hold my hands and walk laps.  Our house isn't very big, but we walked from the living room to our bedroom back down the hallway around the kitchen and then back to the living room to start all over about 5 times.  After that I decided we needed to go on a real walk so I bundled Carter up (much to his dismay) and we walked down the street and over to a sidewalk nearby.  He was walking along like a big boy holding my hands and talking away.  It melted my heart.  We had to cross a street so I picked him up to carry him across and he tried the wriggle out of my arms the entire time.  The moment we got across I plopped him down and he took off.  We walked through an area with some snow that hadn't melted yet and Carter laughed the entire way.  The combination of being outside in the fresh air and hearing Carter's laugh really perked me up! 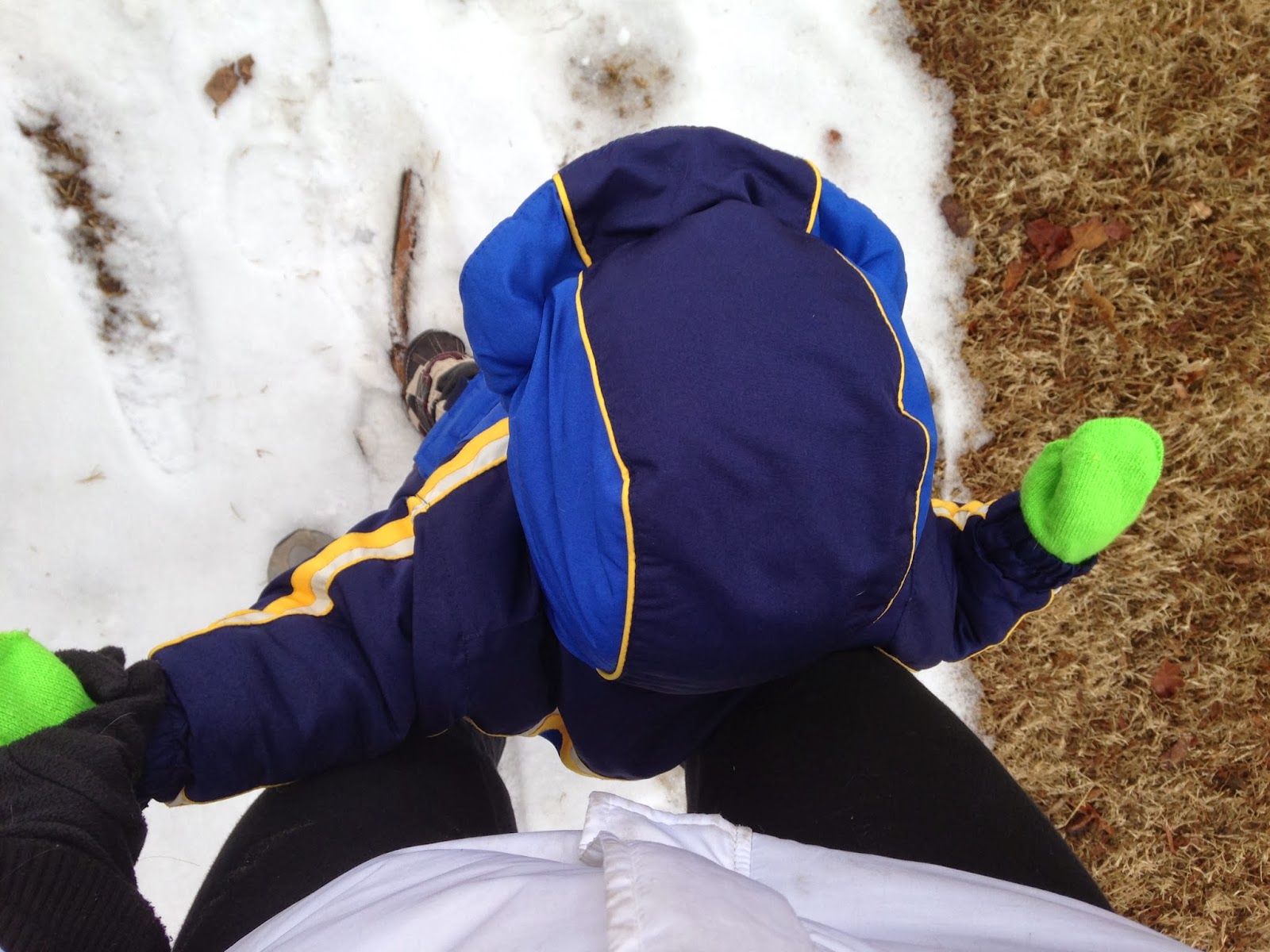 I had plans for all the fun things we would do during the day, but since Carter wouldn't nap he was fussy.  I decided to power through making some Valentine's anyway.  It started out fine with him even enjoying finger painting and laughing as he created his masterpieces.  But he started to get tired, rubbed paint in his hair, and got pissed when I wouldn't let him eat paint.  I slapped myself on the wrists knowing I shouldn't have tried to make Valentine's with him so tired.  To make up to him I put him in the sink with a bowl of water and a spoon.  He had a blast splashing in the bowl and beating his spoon in the water.

Carter was also a very helpful boy watching his daddy add flooring in the attic from the bottom of the ladder.  With all of my classroom materials to come home in June, Ty decided we needed to create more storage space.  It was so cute watching Carter attempt to climb the ladder.  He was so focused and wanted so badly to get up there with his daddy.  He had to settle for daddy climbing the ladder holding him so he could see what was going on.  I know when he gets a bit older he'll be right beside daddy handing him tools and soaking in home improvement skills like the little sponge small children are.
Eventually Carter's lack of a nap caught up with him and he was becoming a hot mess.  I decided to go out for a run hoping it would put him to sleep.  On our way to the trail he fell asleep within the first few minutes in the car.  He slept through getting his coat on, woke up when I snapped him into the stroller, and was already out cold by the time we hit the half-mile mark.  I had planned on running 3 miles, but since Carter was soundly sleeping I just kept going.  Finally after 6 miles I decided to call it quits and walked a cool down with a still sleeping babe.  Had it been warmer, I would have continued to walk until Carter woke up, but it was cold and I was freezing after a quarter-mile walk so I headed back to the car.

As always it was hard to lay Carter down for bed knowing tomorrow morning it's back to the daily grind, but it was even harder because I was worried about how he'll do at daycare tomorrow.  I'm hoping today was just a missing Grammy and not feeling up to par fussy day and he'll be back to normal tomorrow.
Posted by Liz Runningmomma at 7:45 PM