Looking back at Carter a year ago on Valentine's Day I am amazed at how much he has changed!  He barely looks like the same baby.  My heart hurts a little bit looking at how tiny he was.  Then I look at the picture from today and my heart melts.  My little boy has such personality, such sweetness, such adventure and bravery to try new things.  Every day that passes he brings joy to my life.  Every moment spent with him is a treasure.  I love Valentine's Day more than ever before because it's a day to really dote on Carter and show him how much I love him.  We had an amazing day today! 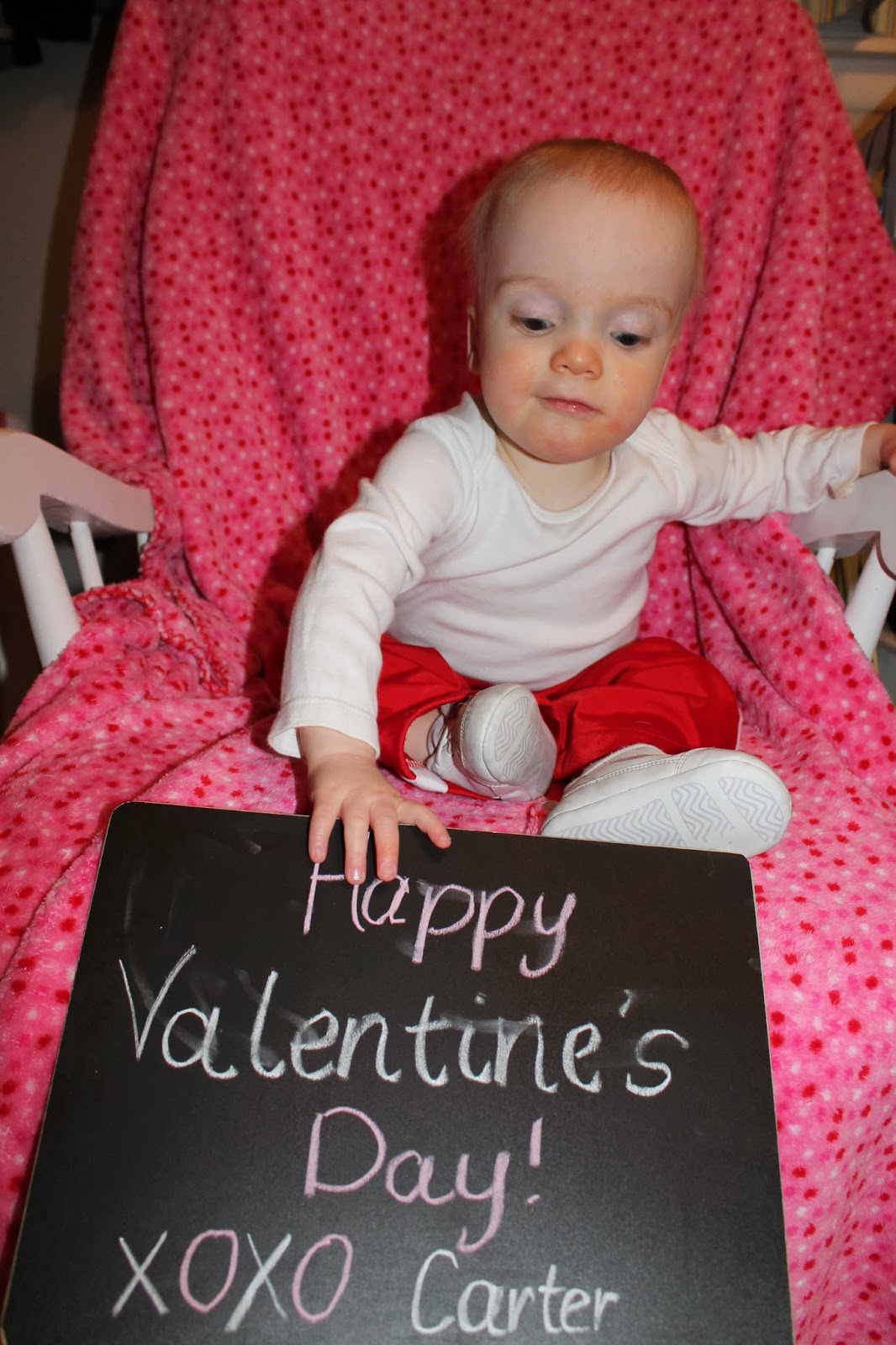 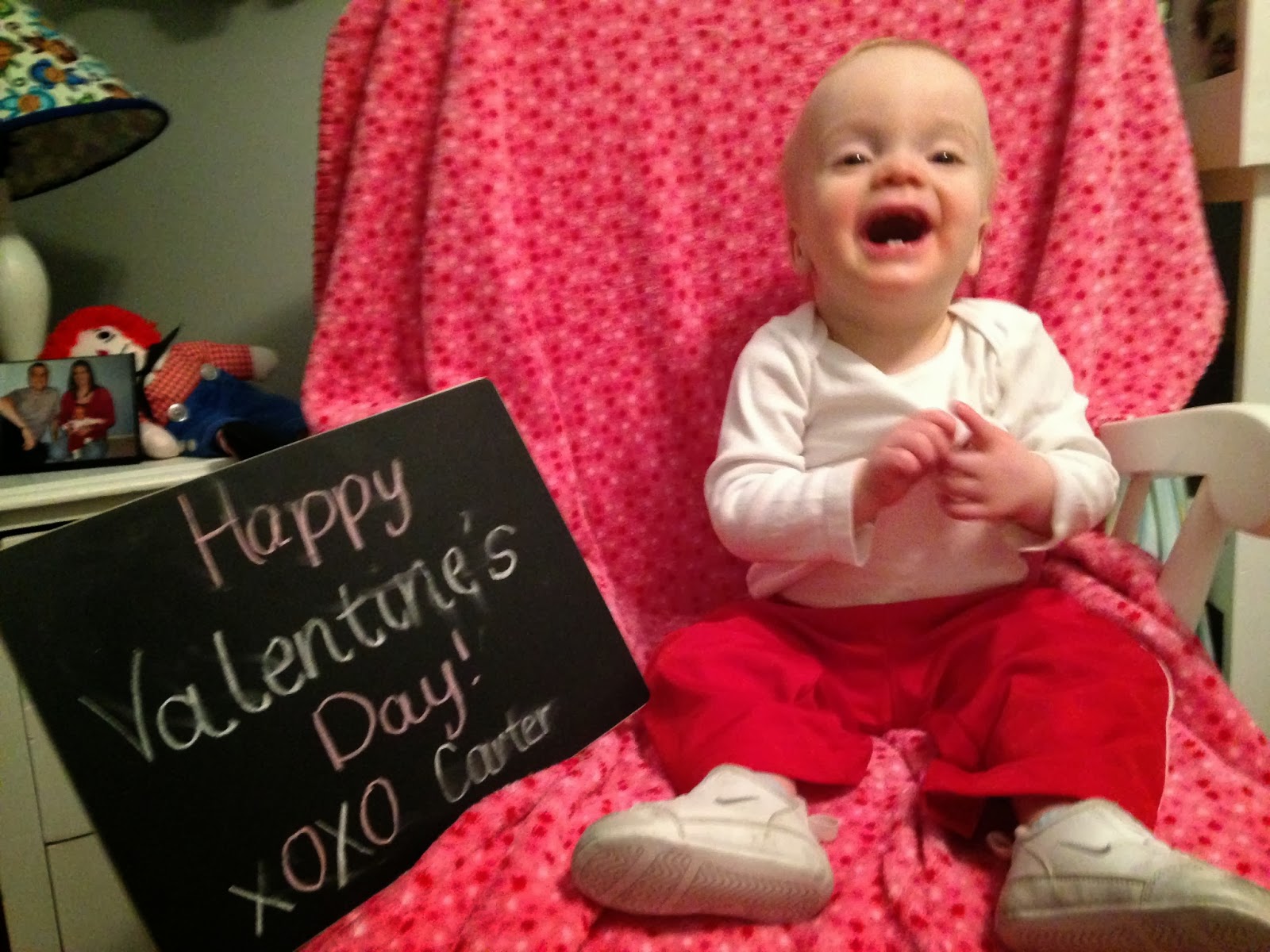 Carter's day started early for him at 6:15 with heart-shaped sweet potato pancakes, snuggles, and changing into a Valentine-themed outfit.  Since he woke up early we had extra time together before heading out the door and got to read the special book Ty and I got him for Valentine's Day.  I couldn't get enough of my little man, squeezing him close and snuggling into him.  I was excited for Carter to share his Valentines with his classmates.  Dropping him off, I focused on that and the fact that he was having a party at daycare to get my mind off missing him.  I kept thinking about last year and how we spent the entire day together on Valentine's Day since I was still on maternity leave and my heart yearned for another day like that.  It was as though Carter knew I was struggling with leaving because he really hammed it up for me and gave me his best cheezer smiles before I left. 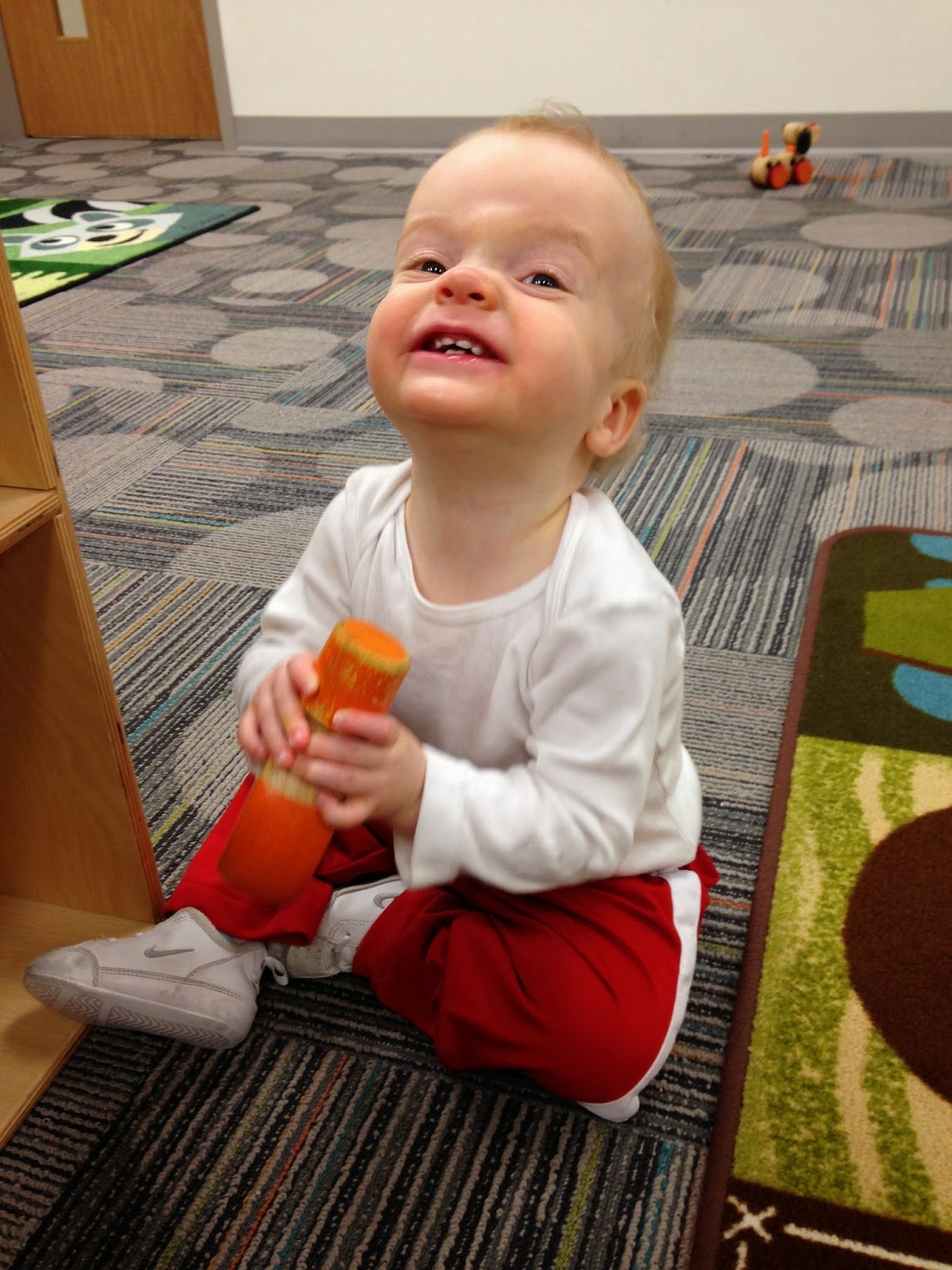 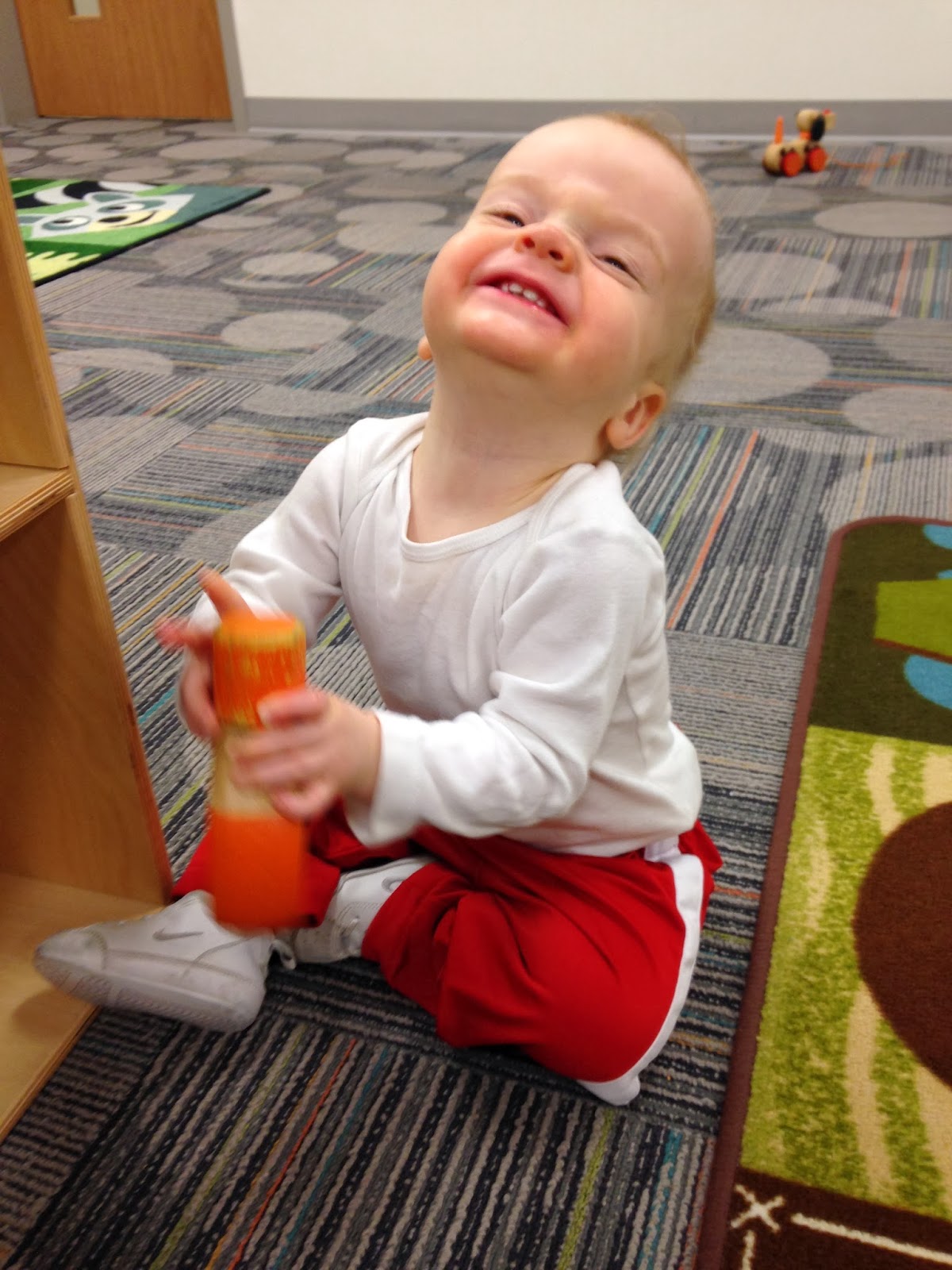 Of course my students had to make sure I felt loved at school as well.  As soon as they began arriving they were too excited to go to their morning rotation (which was playground, by far their favorite) and trickled in a few at a time to bring me flowers, gifts, and cards before heading to the playground.  Something I will miss next year is celebrating Valentine's Day with my students at school.  They get so excited, but not out of control excited like the Christmas party day.  We celebrate without parents and an official party which creates a much calmer atmosphere.  The students really focus on how much they love each other and their teachers which leads to a very sweet and helpful day.  There's just something about hand-made cards and notes written from students that makes your day.  My favorite one ended with "I really love spending time with you."  It doesn't get any better than that.
This week was also Teacher Appreciation Week which I like to refer to as "Fatten My Teacher Up Week" because students bring us goodies all week long.  Our PTAG catered lunch in for us and our homeroom moms came 30 minutes before lunch for coverage so we could have a longer lunch.  My co-teacher was pretty insistent that we get off campus for a bit and I obliged.  Suddenly during our lunch she started rushing me along, wanting to leave right away.  I thought it was odd, but didn't think much of it until she whispered something to a teacher sitting across from me who looked at me, smiled, and nodded her head.  Then on the way to Panera, where she claimed she wanted a coffee (which she typically doesn't drink) and then changed her mind to an iced tea (which she turned down at lunch because she "had drank too much the day before"), I started to get suspicious.  I couldn't figure out what was going on and then put the pieces together that it was Valentine's Day and Ty has surprised me at lunch every year since we've lived in the same town.  Arriving at Panera I began to scour the parking lot, but didn't see Ty's car so chalked it up to my co-teacher just acting strange.  As we walked in, Ty came walking up with a bouquet of flowers and I was honestly shocked even though I had noticed something was awry.  We enjoyed talking and holding hands for the 15 minutes we had until I needed to head back to school.  It was so funny because earlier in the day when my co-teacher asked what our plans were for Valentine's Day I told her Ty was pretty much set for life from the Valentine's Day 2 years ago when he bought a dozen roses and hid them in places I would find them throughout the day with little notes attached.  I guess he still had a trick hidden up his sleeve.

Having such a fun day at school and then picking Carter up mixed with the fact that it was 61 degrees outside added up to being about ready to burst.  I couldn't wait to get Carter home and head outside.  He had a blow out at daycare along with a clothing change, so I had to put him in another red outfit before playing.  This time I went with a red onesie, khakis, and little red shoes.
We had a blast outside.  We started with the swing.  He kicked his legs the whole time and laughed quite a bit.  Then he went for his little cars.  He would crawl over to the car and then reach his arms up into the air wanting me to help him climb on.  It was the funniest thing because he would step up onto the car and then stand on top trying to figure out how to get his legs on either side of the car.  Eventually I would help him.  Only after getting my fill of laughs though!  One of my favorite things about playing outside is the interaction between Harper and Carter.  She would run over to him, sniff him, lick his face, and run off.  A few times she ran over and jumped up at him.  At one point Carter was crawling in the grass.  Harper ran over to him, did her play bow, barked at him, and hopped around him in an attempt to get him to play with her. 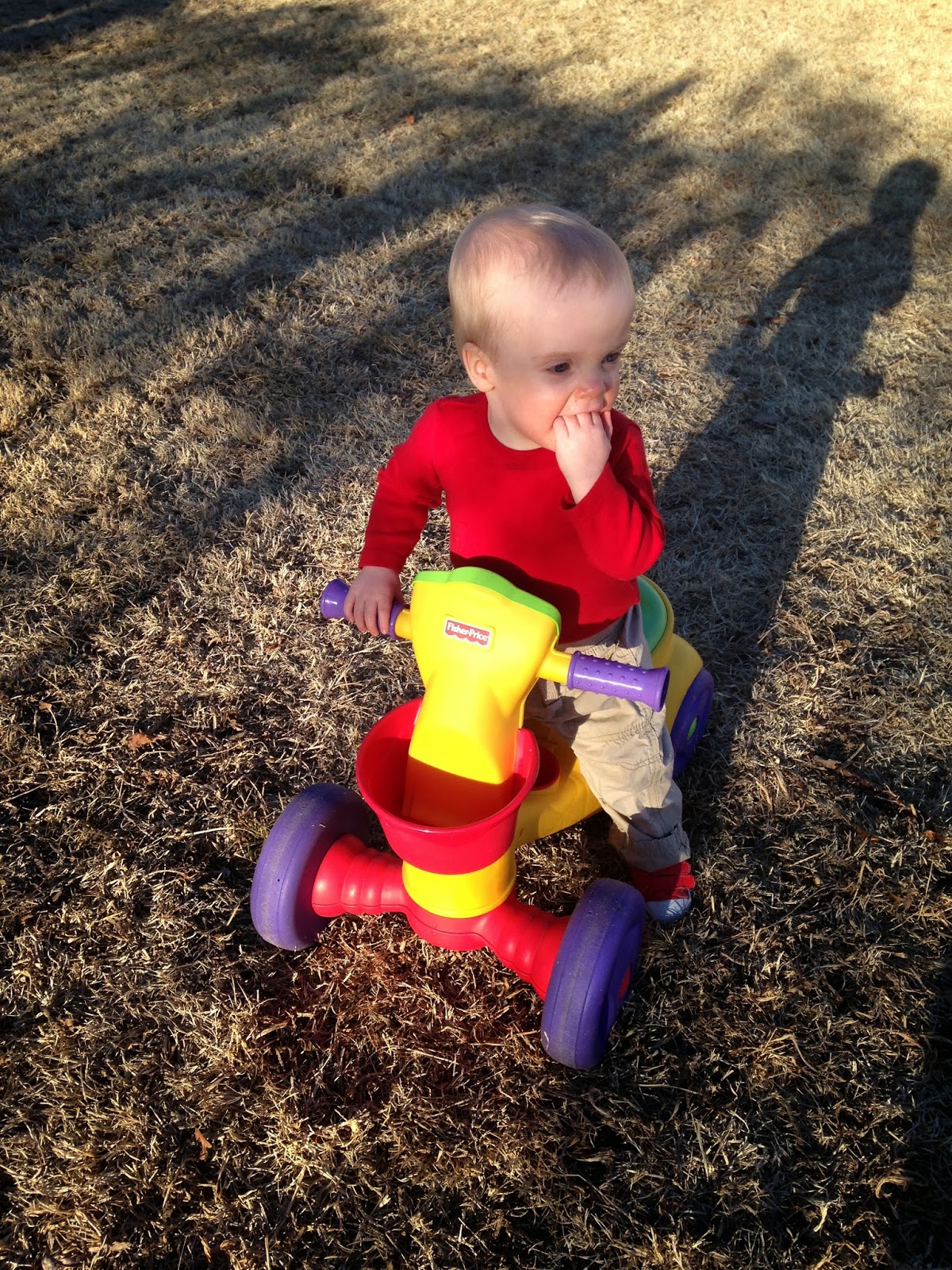 Carter and I wanted to wait for daddy to get home before going through all of our valentines.  While we waited, Carter checked out all the flowers I received from students.  He got ahold of a rose and had a blast ripping off all the petals one by one.  Shortly after the destruction of my flower, Ty arrived. We were very excited to open the bag he had gotten to decorate and pull out the valentines from his friends one by one.  It was so cute to see what different kids had made/brought.  Carter enjoyed looking at his cards and wanted to eat something, so we let him have the goldfish he received with the note that said "I'm glad we are in the same school" while Ty and I chowed down on the candy.  I was surprised by how many kids had candy with their valentines.  Ty and I sure weren't complaining though, we will enjoy all of the treats.  Today was my favorite Valentine's Day by far!  I hope you had a good one as well. 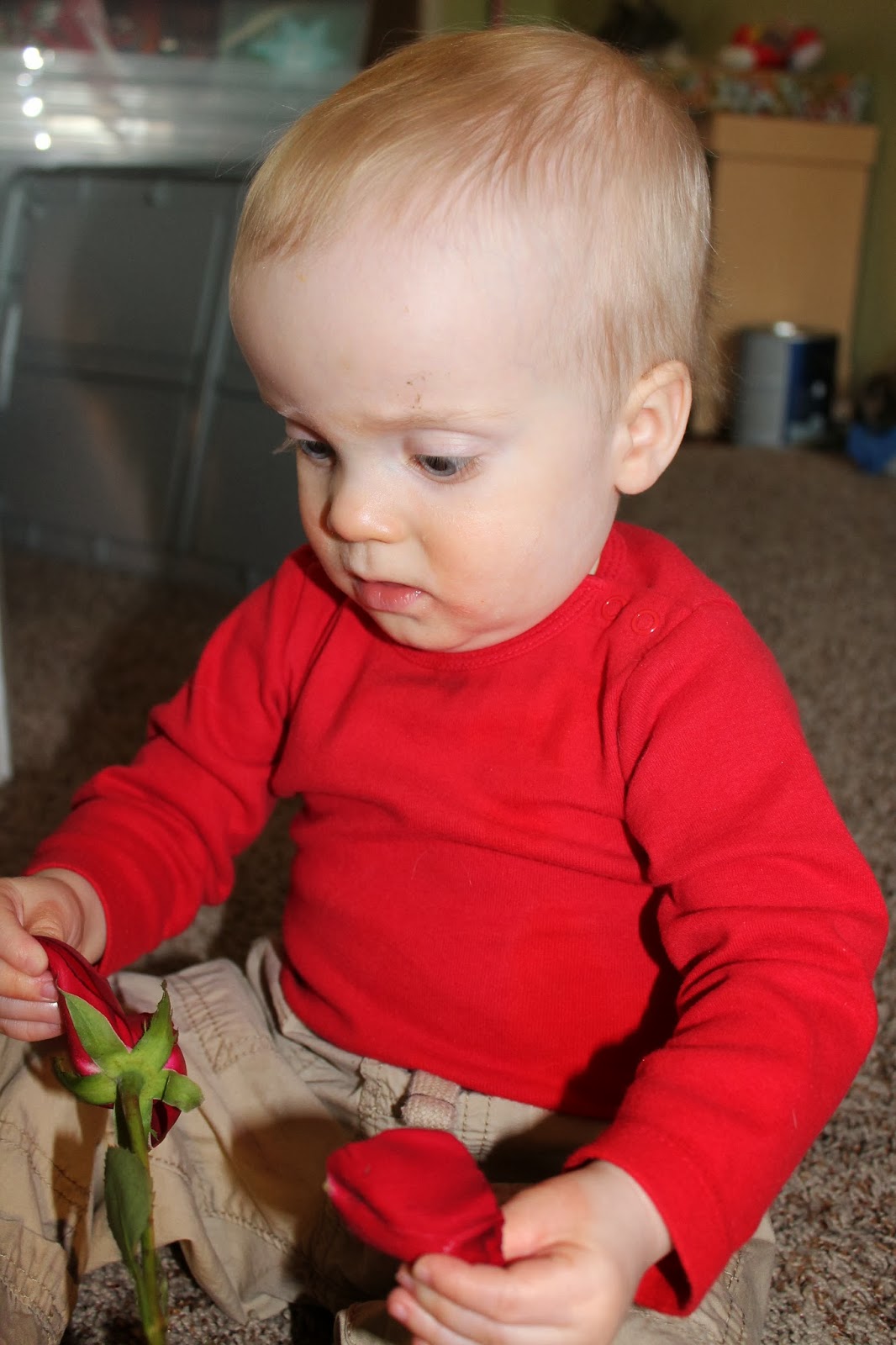 Posted by Liz Runningmomma at 8:22 PM