Daddy Day: Taking a Tiger to the Zoo

Today I had the day off due to President's Day. That is a first for me in my professional career and it was quite the nice little perk! 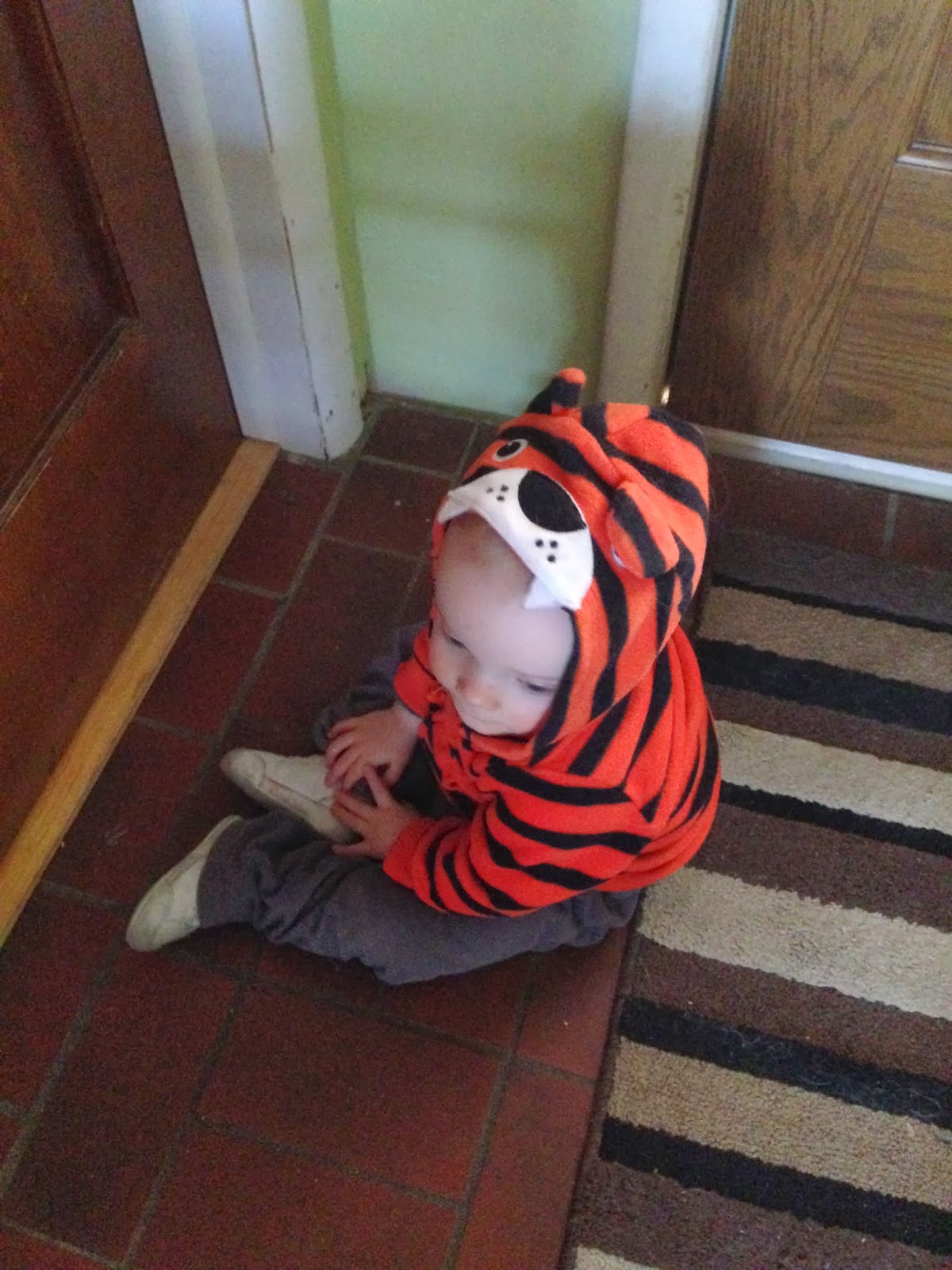 Carter and I started our day off leisurely playing in the living room and watching TV. Once we got a little motivation, we decided that we would go to the zoo for a bit! As a Valentine's Day present for our family, we wanted to get a season pass for the zoo. At $75 it makes sense for as much as we and Carter love the zoo. Now with a pass, we can go for a few hours and see whatever we want and not feel like we wasted any money because we didn't stay all day. 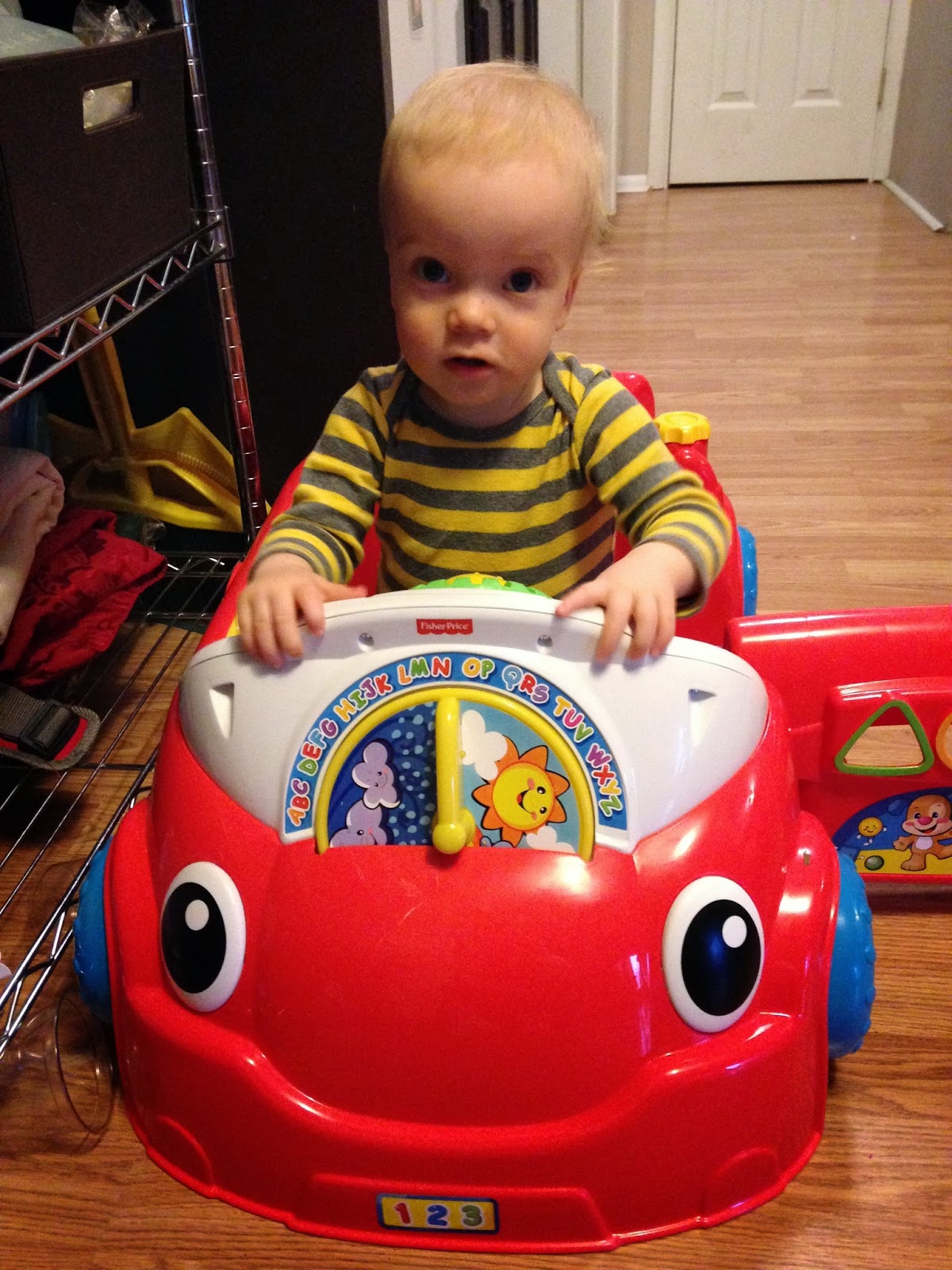 We got there at about 10am and Carter was due for a snack so I put him in his stroller and I sat on the bumper and he had a banana, some water and random fish crackers that may or may not have been stale... but edible. To be honest, we got a lot of stares from other zoo goers, mostly families and moms with kids. Dad and son seemed to be rare but that was fine for us!

After a painstaking 20 minute sign up process due to computer problems, we were in the zoo. I knew we didn't have a lot of time because we wanted to meet Liz for a late lunch so we went to see the bigger animals that Carter could see well. 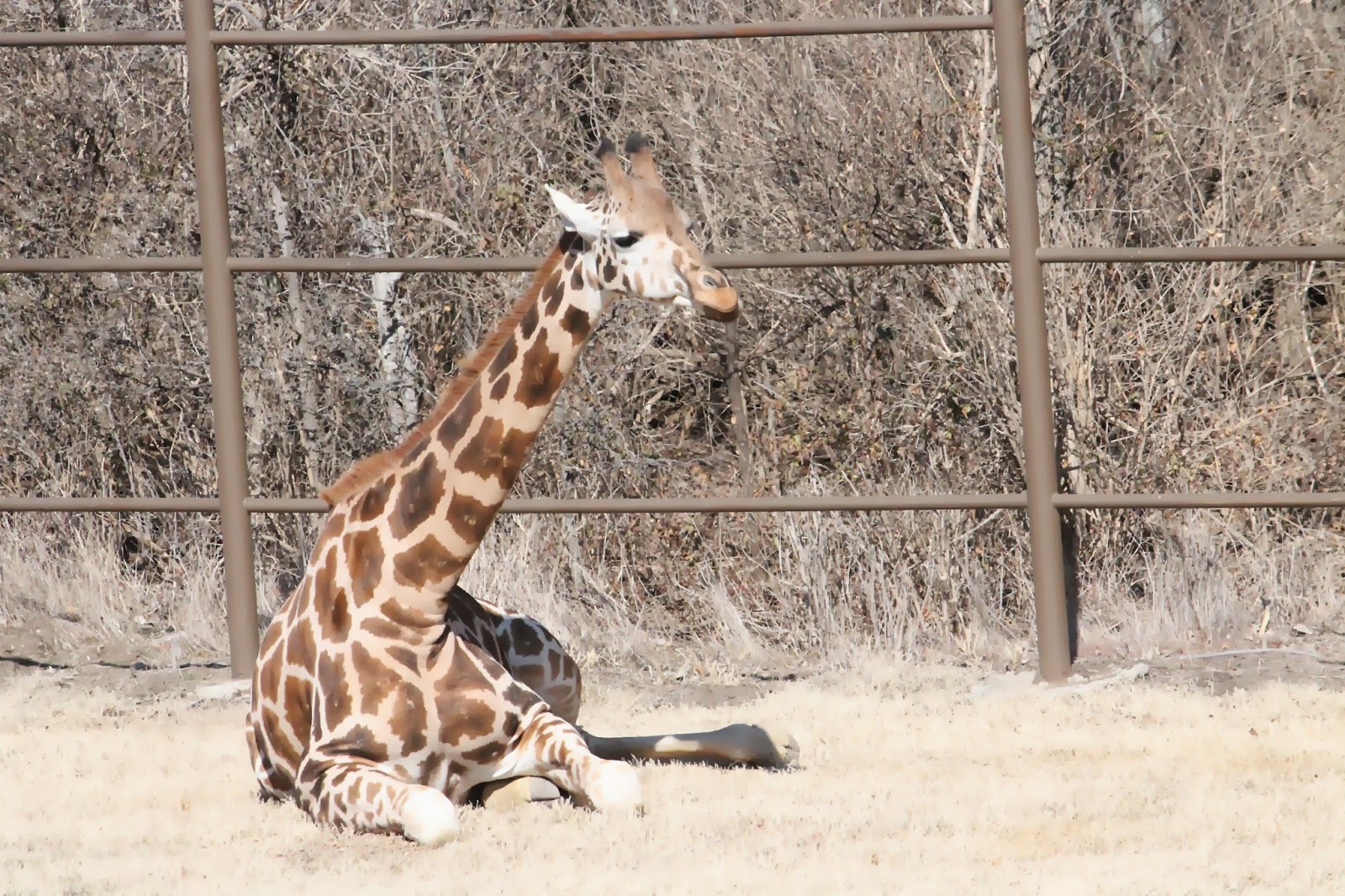 First stop was the petting zoo that consisted of about a dozen friendly, portly goats, and one very aggressive rabbit name Muffin. Carter petted every goat and laughed and giggled the entire time. While petting one of the white goats, it even lowered its head and nuzzled into him. The keeper was very friendly and even took photos of us. After we petted every goat, I asked the keeper what was in the pin in the corner to which replied, "that's Muffin the rabbit". 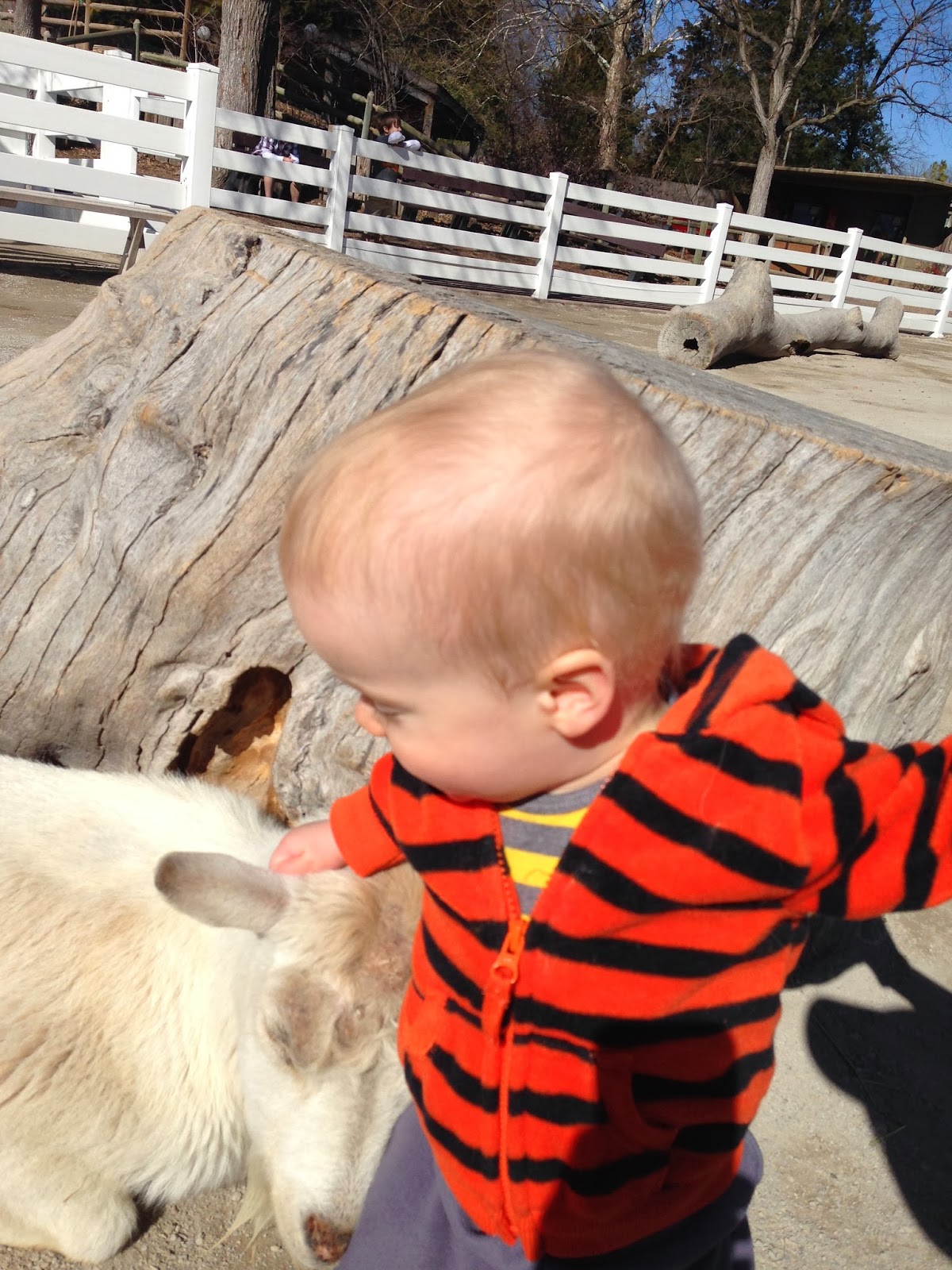 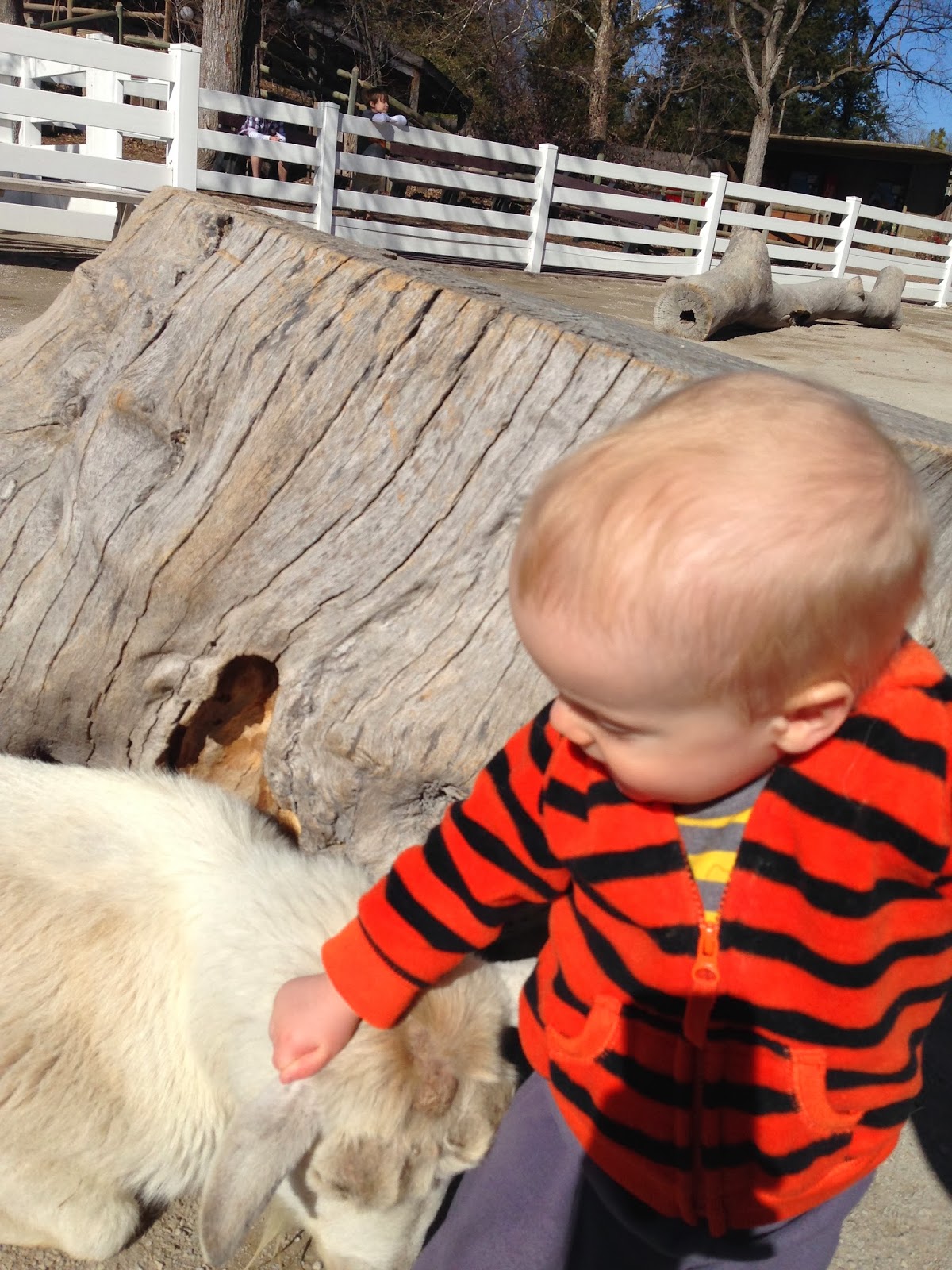 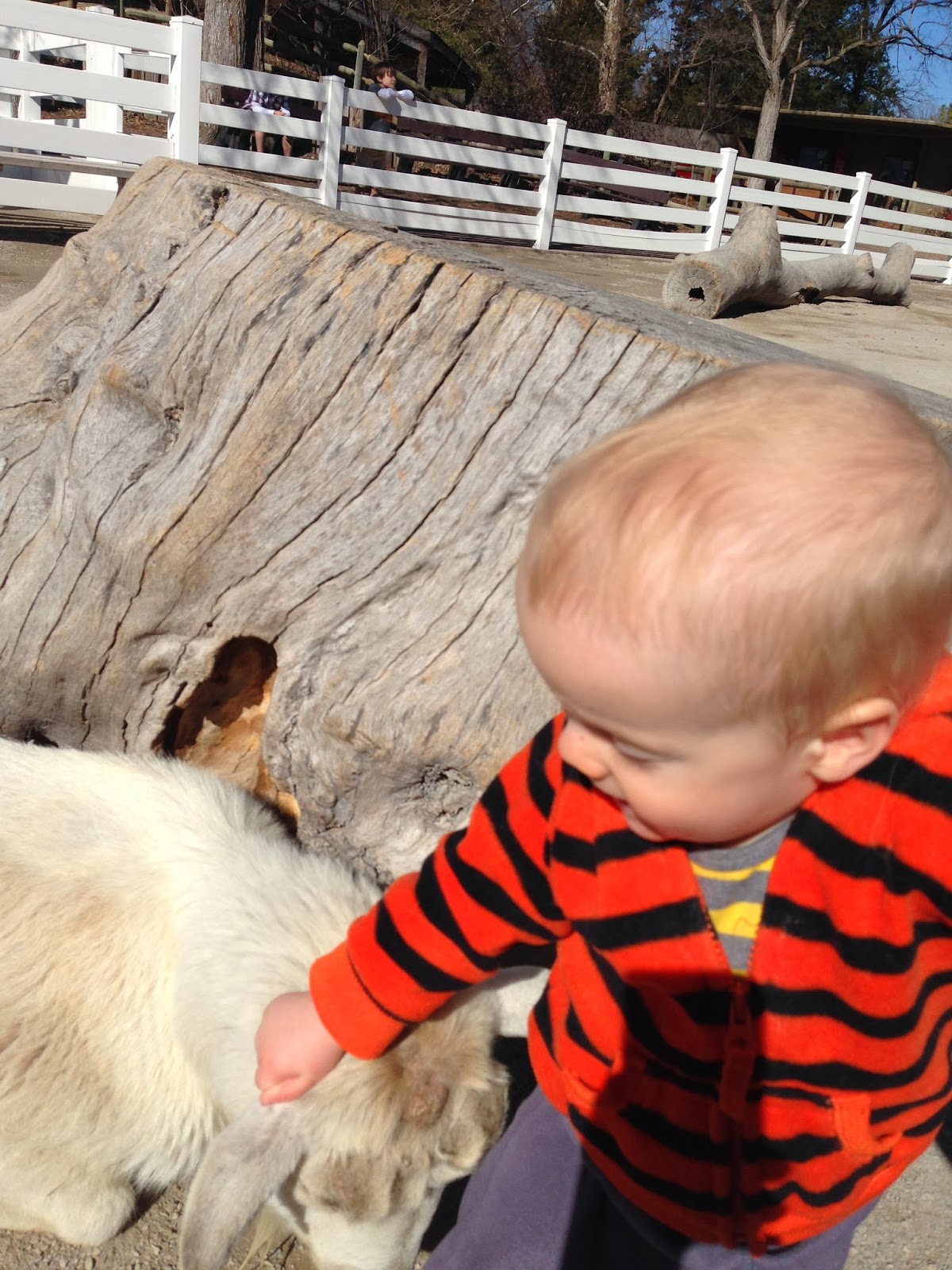 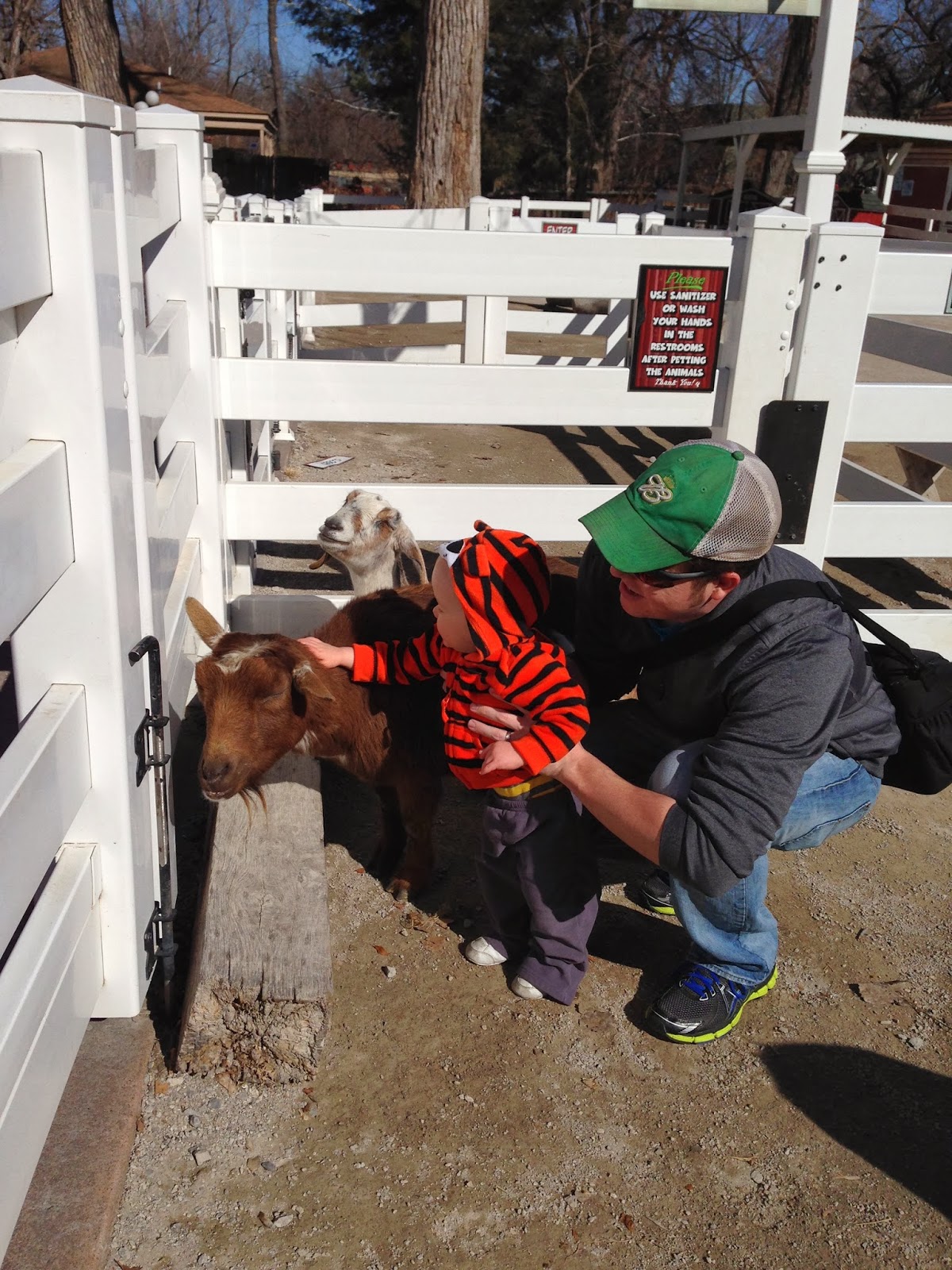 Naturally I thought a rabbit would be something fun for Carter to pet so we (keeper included) went to go see her. She said that she will get her out but we probably shouldn't go into the pin. I thought that was weird until she reached in and actually tried to grab Muffin. Muffin immediately made it clear that she did not want to be petted and started growling and slapping the keeper with her front paws, much like a cat. She told us Muffin was just shy and tried 4 or 5 more times to grab her with the same results. While we never touched Muffin (not a loss it seems...) Carter laughed and giggled through the whole ordeal.

After that it was onto the tiger. And as luck would have it, the keepers had just put out the tiger lunch which consisted of  8 or 10 chunks of raw meat spread around the enclosure, on the grass, on stumps and in trees. The moment we stopped, they released the tiger and he ran out and eagerly started eating his meal. Carter absolutely loved it, squealing, laughing, and trashing his feet. Thrashing so much that he kicked one of his shoes over the fence into no man's land between the two fences... Great I thought, that is going to be a hard one to explain. But after some thought, I put Carter back in the stroller, checked for employees, and leaned over and was able to just barely grab his shoe. Now don't worry, there was another fence, and a 30 foot ravine between me and the tiger so there were no dangers. I was just concerned how we were going to explain to mom how we went the zoo with two shoes and only came home with one. 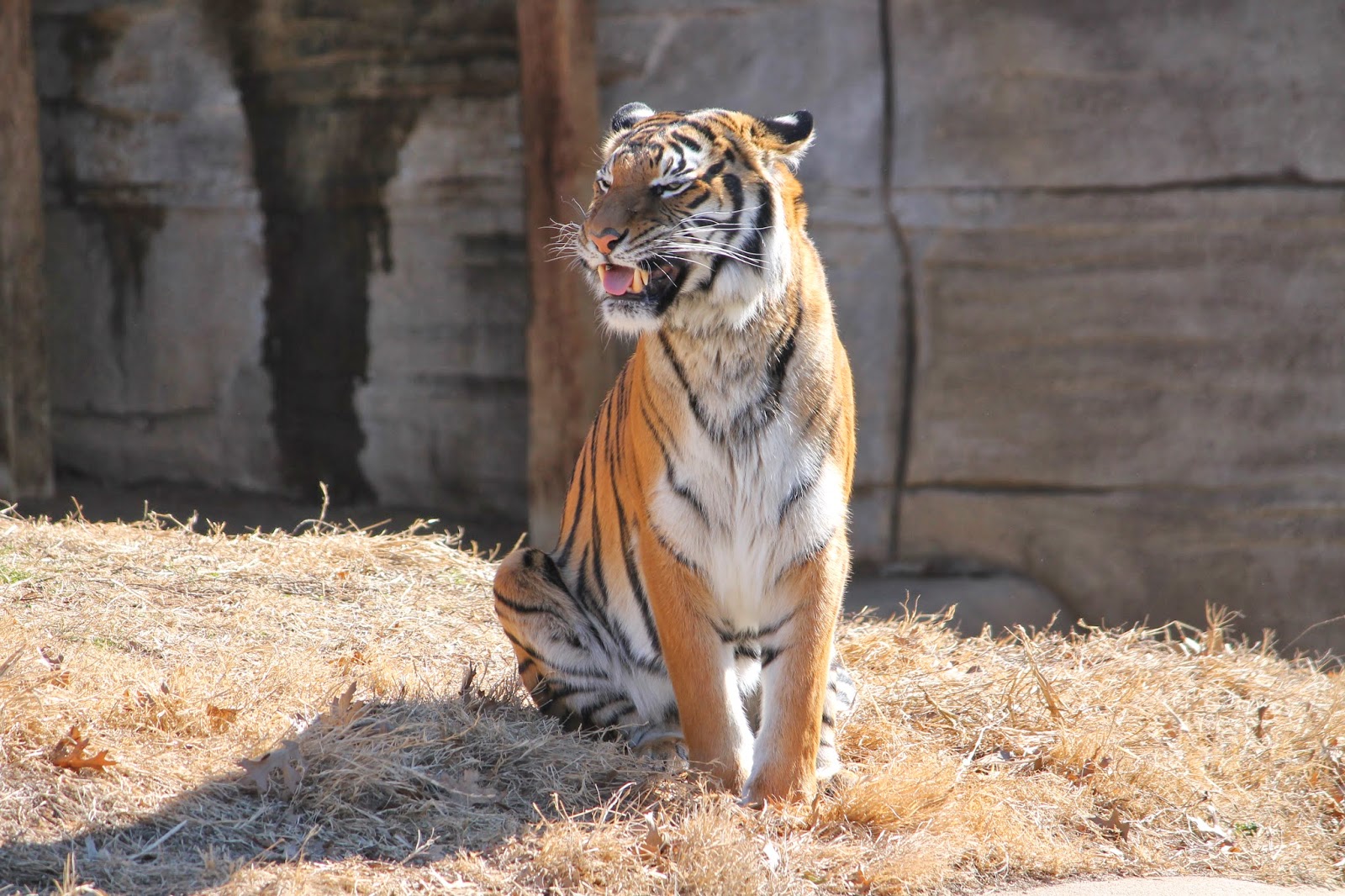 After that was the lions where Carter got a complimentary half roar from the male lion when he got up to reposition himself in the sun. Carter really appreciated that and showed his pleasure with a loud sequel. 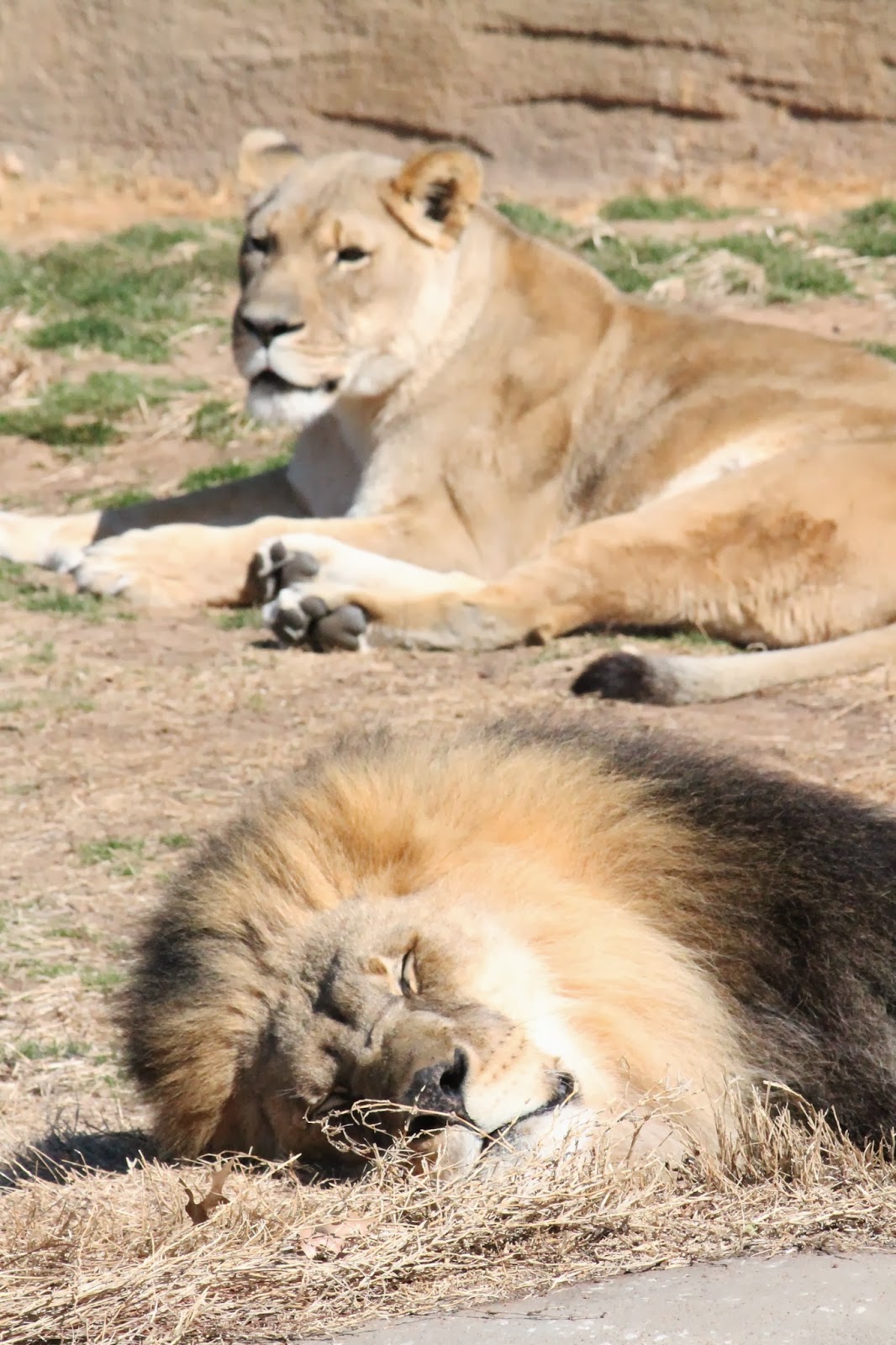 After that we saw rhinos, buffalo, giraffe, and hyena's before heading to the car to meet Liz for lunch and capping off a good day! 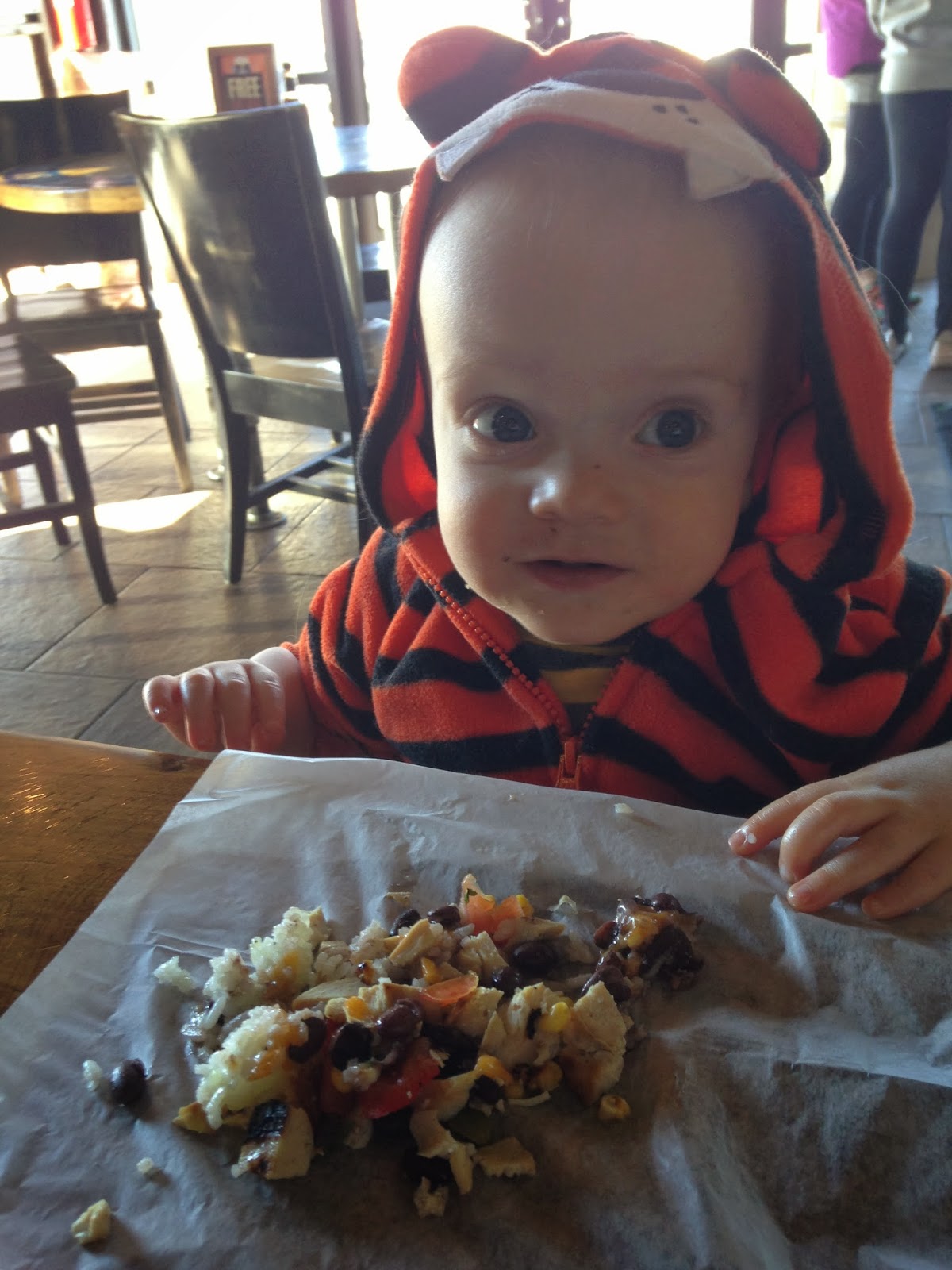 Posted by Liz Runningmomma at 8:07 PM