I love that days like today are "average".  It was such a good day!  After a rough weekend of again waking up at 5 am with a random wake-up around 2:30-3:00 both nights, Carter slept until 6:15 this morning.  I love it when he wakes up early and we get extra play time in the morning.  As I was getting ready, he pulled up to my make-up drawer and began playing with my make-up.  At one point he accidentally closed the drawer and worked really hard to open it again with minimal movement.  He gave me his puppy dog eyes and a few tears until I helped him open the drawer. 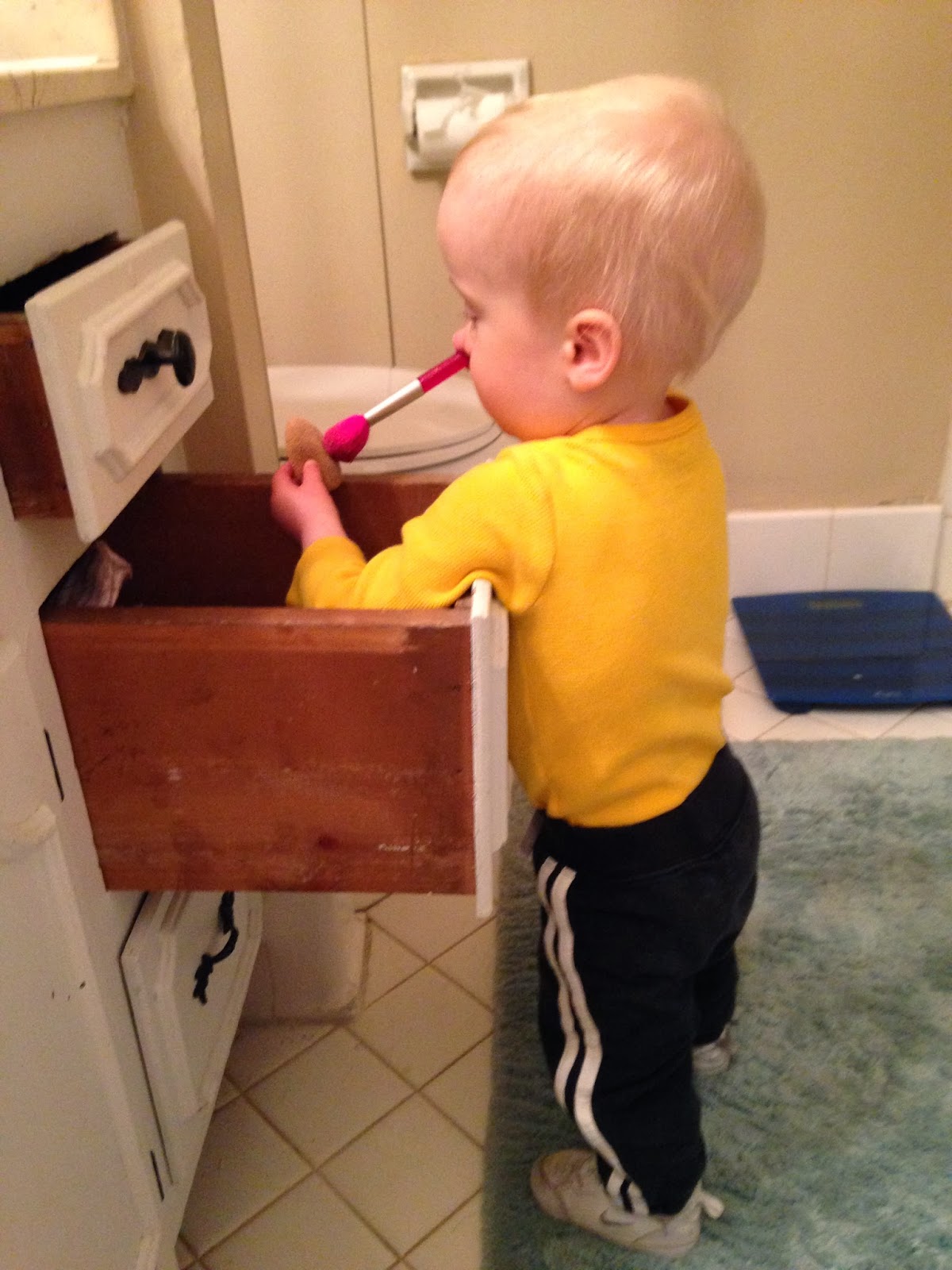 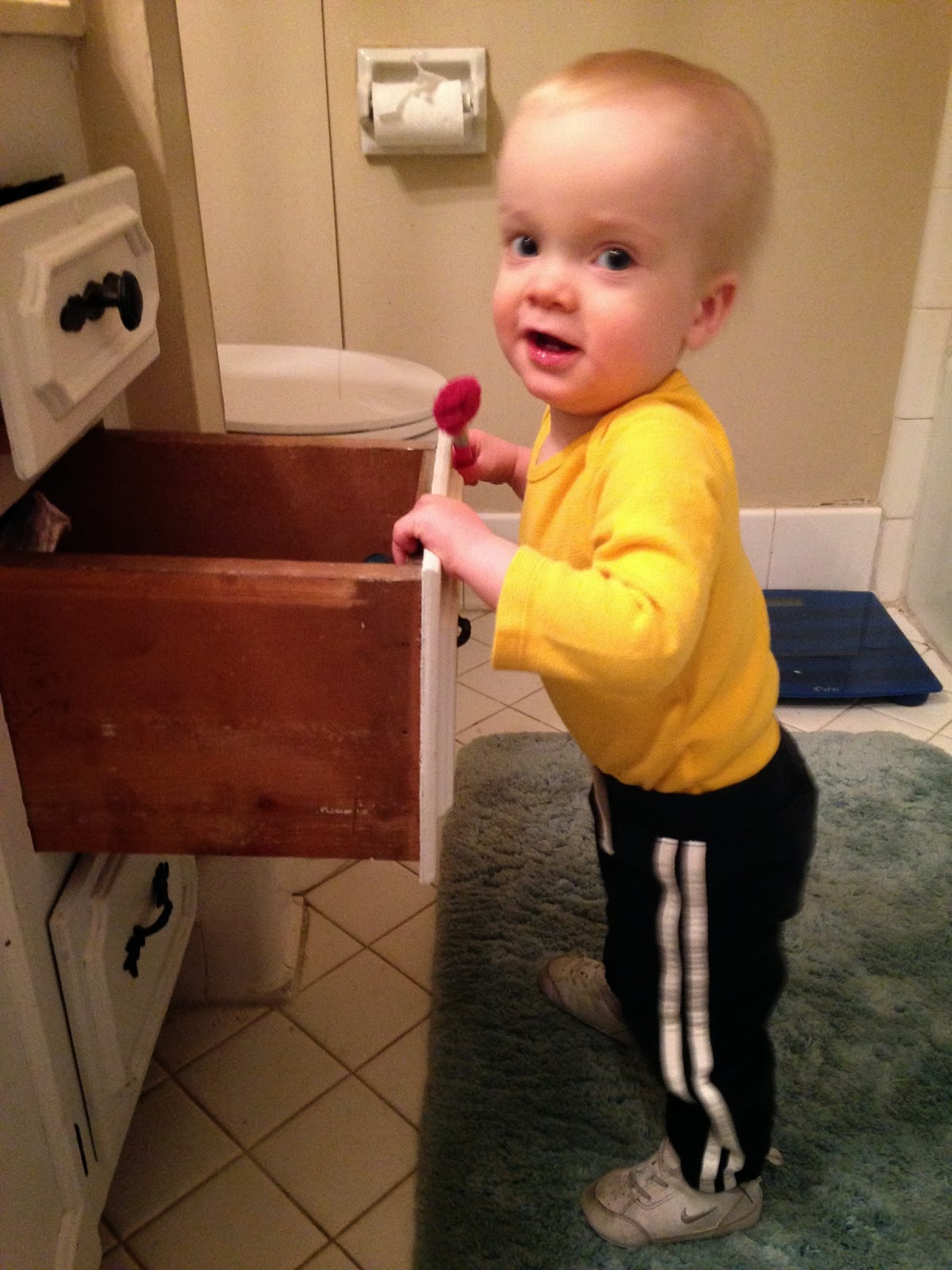 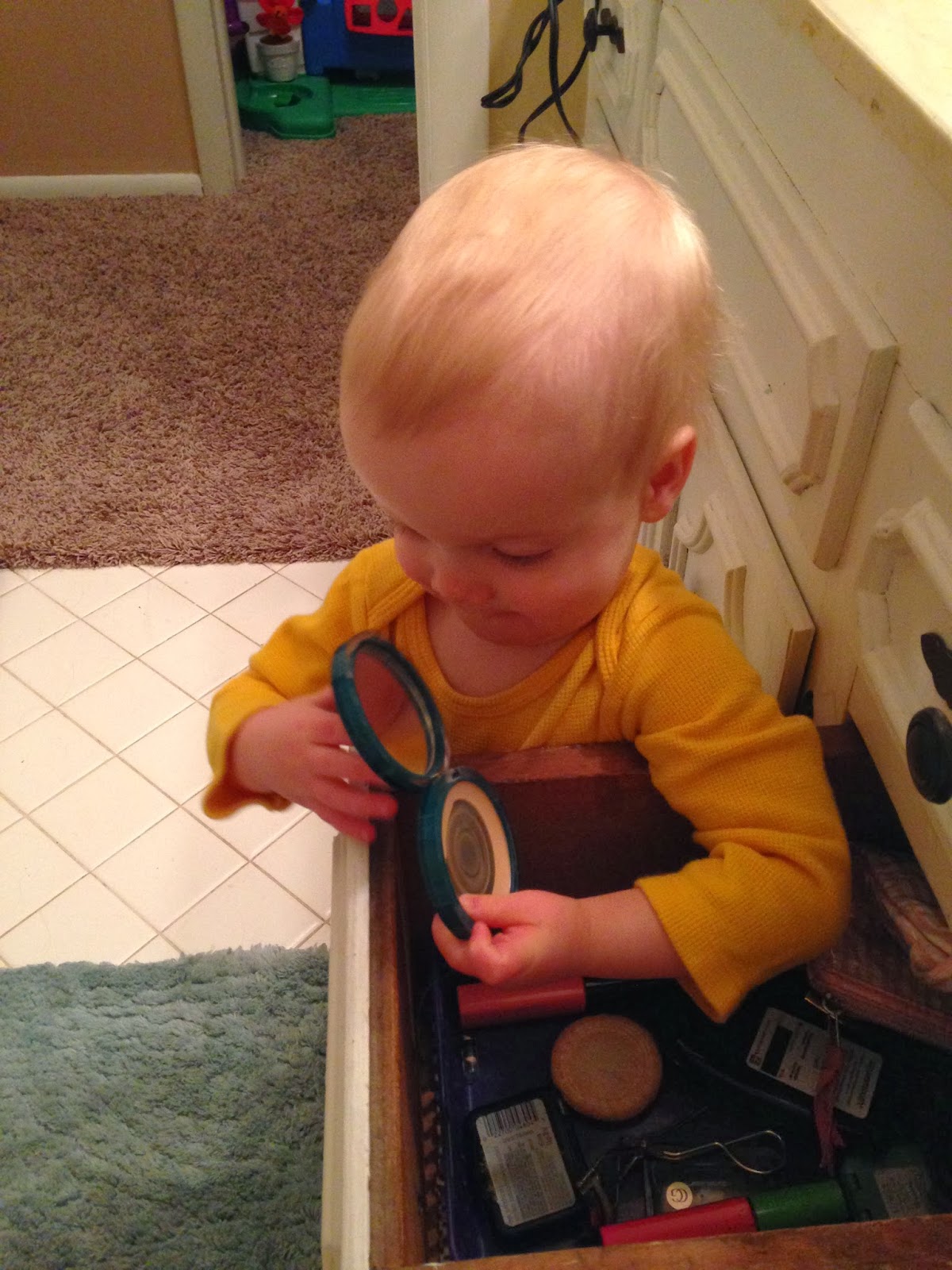 When I dropped Carter off at daycare he initially sat on the floor and watched everyone while reaching his hand out to me.  I walked him over to a car and he immediately swung one leg over and took off going backward.  I had never seen him move forward before, but he backed himself into a corner and then began pushing forward and moved all the way across the room.  I was so proud of him and excited to see him moving so quickly.  Laughing as my sweet boy rode around the room was the perfect way to start my day!

After school we came straight home to play.  Last week Carter picked up a crayon he had received as a valentine present and colored on the back of my make-up box.  I was so excited because he's never actually drawn before.  I screeched and ran to show Ty what Carter had done.  Surprisingly, Ty wasn't nearly as impressed as I was.  This weekend at the shower Carter used a pen to draw on a piece of paper.  So today I was extremely excited to pull out the crayons and offer him some paper.  Immediately after doing so I realized I offered him far too many crayons.  He found much more entertainment in throwing the crayons all over the living room than actually using them to color.  He did make a little masterpiece that is now hanging on our fridge.


This evening I got an automated phone call from the school district sharing information about changes in our calendar.  There is an education funding rally in the capitol of our state and our school board voted for us to have the day off so everyone can go and participate in the rally.  I'm pumped about an extra day with Carter and the opportunity to participate in a rally to support education, but it comes at a price.  Going to school for an extra 30 minutes a day for the entire month of March (starting on Monday).  Ick, we went over on snow days a few years back and had to go for an extra 30 minutes every day to make the time up.  The kids were so tired by the end of the day and I even had one baby fall asleep at the end of the day multiple times.  I hate the thought of being away from Carter for an extra 30 minutes a day, but it won't last for very long.  We will also get out of school one day earlier at the end of the school year.  And I just have a little over 3 months left.  Wish us all luck starting Monday!
Posted by Liz Runningmomma at 8:27 PM