This year marks our 8 year wedding anniversary. I feel like we've really hit our stride this year. The kids are at fun ages and things have never been better. I'm loving Ty and our little family now more than ever. We're only 2 years away from the big 10 year anniversary. We've talked a little bit about doing something special for our 10 year anniversary. We're thinking about going on a backpacking trip for a weekend away, just the 2 of us. I kind of can't wait! We were still at my parents' house the weekend before our anniversary because we were there for the 4th. My parents said they'd watch the kids one night so we could go on a date night. I thought a little bit about where to go while I was running that morning and Ty loved the idea so we went with it. We hit up Café del Rio in the mall for queso and drinks. Then we walked across the hallway to eat dinner at Mall Deli. It was amazing and I ran 10 miles that morning so I had a sufficient appetite! We were done eating pretty early so we decided to stop off at Lakeside Park before going back to my parents' house and took a little walk around the lake. We sat and talked on a bench, watching a duckling swim around for a bit but it was hot and we were sweating so we headed back. We made it home before the kids went to bed so we got to give them hugs and kisses. 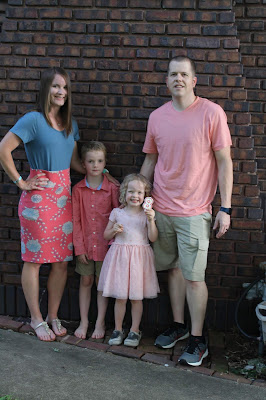 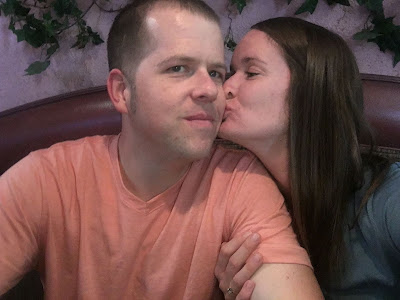 The following day we headed out to the Wilderness Trails to run together before the USA Women's World Cup final. We planned to run out to the spot where Ty proposed but the bridges were flooded so we just ran an out and back and then another out and back on different parts of our wedding day 5k course. It was fun to be in the town we met in for our anniversary celebration and hit up special spots from the start of our relationship. I ran in front of Ty through the single track portions of the trail and took some spider webs. I sang, "I'll take spider webs for you." in tune to Boyz II Men but he wasn't impressed and said I only ran through spider webs for him because I am faster than him. We normally don't do presents for our anniversary but this year I got Ty a rubber wedding band from the running store and he bought me a pair of Goodr sunglasses. Both things that weren't necessary but nice to have, so it was perfect. We laughed that Ty is on his 4th wedding band and I still have my original. I guess it pays to never really fluctuate more than 5 pounds one way or another in weight (outside of pregnancy). 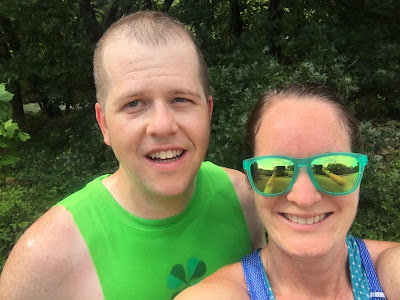 Our anniversary was on a Tuesday. Carter had swim lessons so I went ahead and ran with my running group I meet with on Tuesday evenings while Ty took the kids to swim. That meant I slept until the kids got up. We were talking about our anniversary and the kids wanted to see pictures so I got out our wedding album and we looked through pictures and talked about who was there. That evening I showered after my run and chugged a bunch of water since I ran 8 miles in 110 degrees with the heat index. I didn't think about it until I was putting my dress on and it was a bit tight. My stomach was bloated from all the water! Tesla cracked me up because she kept following me around and stepping on my train. She even sat on it at one point. We danced to our song and a popular song from this year that we like and then we watched our wedding video. It was a wonderful evening! 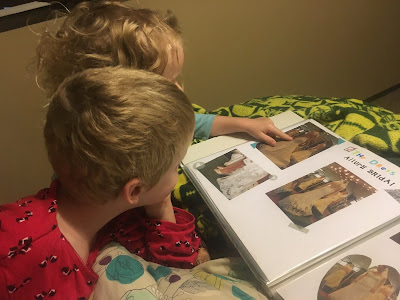 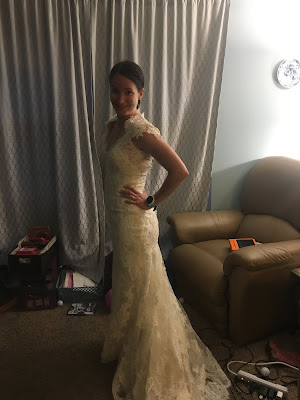 Here's a list of the extra song we've danced to each year: 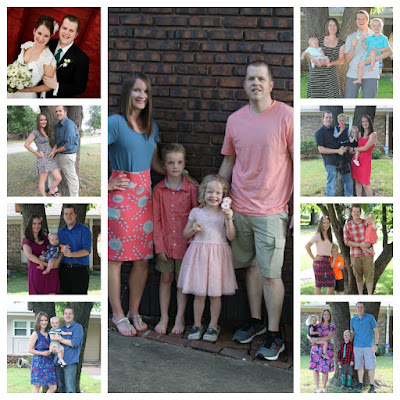 Posted by Liz Runningmomma at 5:09 PM