Tuesday evening Carter and I were over at Jeremy's house visiting. While we were there we got a text from my mom that the parks department had decided to move the Firecracker 5k to July 3rd in the evening this year. It has always been the 4th in the morning so they hadn't even noticed when signing up that the race was 7pm. Ty made plans to leave work a bit early on the 3rd so we could make it in time for me to run the race. I was a little nervous about getting there in time but he was able to leave work at 3:00 and we arrived a little after 6:00. Since I'd just spent a couple hours in the car I did a quick pre-run yoga video by Yoga with Adriene on YouTube before heading out for my warm-up. It was really hot so I didn't really need to "warm up" but my legs felt weird from driving in the car plus the kids and I went to a movie with friends earlier in the day so my legs were just wonky from sitting so much. I wanted to run at least 7 miles total for the day so I went ahead and ran a 2 mile warm up. I was tempted to run a longer warm up so I could get 8 miles in but didn't want to get too hot before the race. 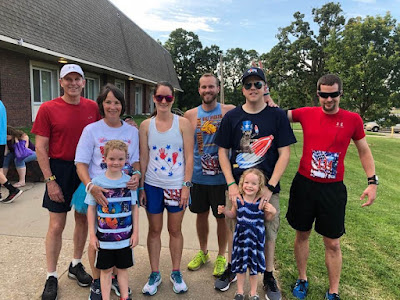 With the move from a morning race on the 4th to an evening race on the 3rd, the turnout was much smaller than normal. When I looked around I was surprised by how few runners there were. I was disappointed to find out they had moved the course from the two laps on the golf course to 2 laps around the park area with an open course meaning cars would be driving on the roads and there was no one to stop traffic in the areas where we crossed the street. I figured running on the roads would be warmer due to the heat of the concrete and there was much less shade. Later when we drove by the golf course and I saw the condition it was in, I was glad the race was moved because it looked awful. The grass was tall and had huge potholes, it was much worse than the conditions for the race last year. I'm guessing due to all the rain and likely flooding they had this spring and summer.

They started the race by lighting firecrackers which were super loud right to my left. My ears were still ringing when we got to the end of the block to turn. I pretty much immediately moved into top female and counted that I was 9th overall after the turn, coming down a nice hill before turning to run a loop inside the baseball diamond area. Jeremy had a nice lead on me and I figured since I am out of race shape and he runs pretty much the same times all year round that he'd beat me handily. I watched him moving up in the race, passing runners. By the time he turned back onto the main street he had moved into 2nd overall but the guy he had passed looked like he was going to go with him. I passed a few guys during the little loop on the streets around the diamonds and by the end of the 1st mile I was in 5th overall. I went through the first mile in 6:36 and felt pretty excited because it had felt relatively easy and relaxed. I expected to be more around 6:40-6:45 pace since that's more my summer 5k shape when I'm not doing any fast running, just base mileage to prepare for the fall season. We turned and ran up the hill on the other side of the block from where we ran down and I passed another runner going up the hill, moving into 4th place. I glanced at my watch at the top of the hill and saw I was running 7:20 pace and it took me a while to get back down to pace after that. I think the hill effected me a lot more since it was hot and I was starting to feel the heat.

We ran through the starting area where we'd turn and go in toward the finish on the 2nd lap. They had a clock there and I was right at 10 minutes when I went by. I figured another 10 minute loop plus 30 seconds to make it to the finish and I'd run around 20:30 for the 5k. I was excited by that because I just wanted to run under 21 minutes and usually run right around 21 minutes at this race. When my watch beeped for the 2nd mile in 6:46, I was shocked. I didn't feel like I'd slowed down that much at all. I thought about it and decided my first mile was likely a bit fast because of the downhill and my second mile was likely a bit slow due to the uphill so maybe they were both more like 6:40 with grade adjusted pace. I pushed hard after the downhill and caught up to the guy in 3rd place. He started to go with me which I was excited about. I hoped I'd have someone to help push me for the final mile but after a small surge as I went by him, he faded fast. I was surprised to see him finish over a minute behind me. I could see Jeremy ahead of me and could tell he had at least a minute lead on me. I knew from how the guy I passed faded there was little chance he would come back to contend for 3rd overall. It was so hard to keep pushing that final mile because my legs felt wonky and I was getting really hot.

As I came up on the hill we had to go up before the finish I decided I wouldn't start my kick until after the hill. Then once I got up the hill, I kind of felt like, what was the point. I ran my 3rd mile in 6:49 and then my finishing kick in 6:40. The finish line was set up really weird with chalk lines drawn across the start of the flags and then another chalk line about halfway down and then another set of lines. I saw the first lines and thought it was the finish so I stopped my watch and decelerated although I continued running through the chute. It wasn't until I crossed the last set of lines that I saw they had finish written in chalk above them. So my Garmin showed 20:31 and 3.05 miles. My official finishing time was 20:35 so it was likely closer to 3.1 than 3.05 but it was still short. I didn't mind because I wasn't having a great race and just wasn't feeling it so I wasn't going to worry about a few hundredths of a mile, plus I'm not in race shape so whatever. I was a little disappointed I had slowed so considerably as the race went on, but that's summer racing for you, especially since I'm more acclimated to early morning running where the temperatures have yet to crack 80 degrees. I don't run in the evening very often and definitely don't try to run fast when I do. I'm nothing if not consistent with running right around 6:45 pace for this race with the past few years being 6:43-6:45 pace average. This year was a 6:44 average. I figure given the much warmer conditions this year since it was in the evening than in past years in the morning, this year's time was better. I likely would have run faster in cooler temps in the morning. Plus there likely would have been more runners in the race which would mean I wouldn't have been basically just running a time trial against myself on the course.

We had a good turnout with results. Jeremy was 2nd overall and 1st in his age group with a 19:18. I was 3rd overall and 1st female. Thomas finished 6th overall and 2nd in his and Jeremy's age group. Not sure what his time was since they don't have online race results. 3rd place in their age group was over 30 minutes which had Ty bummed because had he run, he would have placed in his age group. Dad won his age group and mom won hers as well. Although I would have rather run this race in the morning on the 4th, I still had fun. The upside was that we had more time on the 4th for other activities. I got out for my run before 7:30 and we had fun taking the kids to breakfast and buying fireworks. I have another post coming about our 4th of July fun, so more about that later. Read about last year's Firecracker 5k here, 2017 here, 2016 here, 2015 here, 2014 here, and 2013 here.
Posted by Liz Runningmomma at 7:24 PM