Months ago I ran with some friends and we had brunch afterward. One of my friends' husband met us for brunch and started talking about a beer mile he and his friends do every year. I told him I'd done the Ugly Sweater Beer Mile a few times and it's always a blast. He said he'd invite me to the next beer mile but I didn't really think about it again. Late in the week my friend told me the beer mile was happening that Sunday evening. I already had a 14 mile long run planned for that morning but figured I'd do the long run and go ahead with the beer mile that evening. But that week was awful I got a migraine on Monday and another one on Saturday and every day in between I felt fine in the morning but got a really bad headache around 1-2pm each day. It was rough. I was worried drinking beer would screw with my head and cause my issues to continue into the next week so I was wary of running the race. I was also scared of drinking 48 ounces of beer, especially in that short of a span of time. That is a whole lot of beer for me! I feel tipsy after just one beer and I didn't want to be hungover the next day. And to be honest I don't enjoy the feeling of being drunk anymore. I guess I got boring in my old age. But then trash talking started going down and there were some comments made about women being scared to run the beer mile and that they didn't want to get their hair dirty. Now that I just couldn't let stand so I decided I would be running that beer mile, after effects be damned. 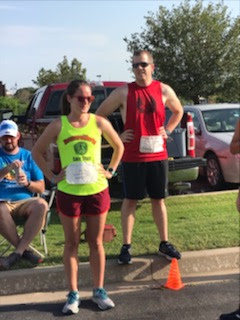 My Sunday long run was a lot of fun and I ended up running 15 miles because I wasn't paying attention and missed our turn around. We ran it pretty conservatively so I knew I'd be fine to run later in the day. My head started feeling funky around 1:00 so I laid down and took a nap and woke up feeling weird but excited to run the beer mile which is named the Rootin Tootin Beer Mile for reasons unknown to me. By that time Ty had decided to do the race as well so Thomas said he'd watch the kids for us and one of my friends who was going to spectate offered to give us a ride. We were set! Since it was crazy hot and I'd run 15 miles that morning I drank a bunch of water throughout the day and even finished off a grape Powerade on the way to the race. My legs were feeling a little stiff when we got out of the car but I'd worn compression socks all day so I think that helped. We found out the course was in the parking lot of the running store and each lap was around 200 meters so we had to run 2 "laps" between each beer. The laps were out and around a cone back and past the beer station and out and around a cone and back. I was a little worried I'd lose track of laps as I ran and had more alcohol in my system but I never did. Luckily I had someone in front of me to help me track the laps.

They explained the course and the rules and then decided to run a quarter to practice the course and see what it was like. I wasn't about running any extra distance so I thought I'd just walk while everyone else ran but then even Ty was running the warm up so I very slowly slogged along behind everyone else. I was also the only woman there so I think my slow warm up paired with being the only woman probably left me looking like I wouldn't be much competition. Going into the race they had posted the 3 fastest times for men and the 3 fastest times for women. I saw the fastest woman's time was 9:03. I felt like that was really doable and figured it would mean a 7:00 mile along with 30 seconds to grab my beer, open it, chug it, and get moving again. That seemed definitely possible. So although I really went into the race hoping to have fun and possibly beat my friend's husband who was talking trash, I really wanted to beat the women's record. I wasn't sure exactly what to expect because the Ugly Sweater Beer Mile we do is only 8 oz of beer per chug and is in cups so is much easier to chug. We were facing 12 oz beers in cans or bottles (I chose cans). So I wasn't sure how much that would change the race. I also figured having run 15 miles that morning would slow me down.

The guy starting the race chugged a beer and then shot the gun (I think he had a gun like at race starts but my memory is kind of blurry). I cracked my beer open and started chugging. I thought my beer was empty but everyone else was still chugging and I was a little embarrassed to dump it over my head and have beer slosh out so I jiggled it around and thought I felt beer in there. But when I went to drink nothing came out. Then I messed with my tab and still nothing came out. My friend yelled, "It's empty, Liz, go," from the sidelines so I tipped it over my head and took off. There were a few people who took off before me, but I don't remember how many. I do remember passing people in the first loop and that it took me until the 2nd loop to pass Ty. I knew I needed to take off fast because by the 3rd beer I stop caring about racing and slow down. I looked down at my watch at one point and saw I was running 6:10 pace. I was pretty impressed with how fast I was able to run on what I assumed would be tired legs and I felt fine. I burped in the first section and tasted grape Powerade and wondered if maybe I had drank too much going into the race. The 2nd chug was much smoother and I really pulled away after that. There were 2 guys ahead of me and then the guy I was hoping to beat pulled up beside me as we went into the next chug and I stayed with him stride for stride and then beat him out of the chug area. Everyone was cheering for me like crazy because I was the only female in the race and I was in 3rd place. I looked down at my watch at another point and saw 5:45 pace. I think running the out and back around cones was probably slower than running on an actual track since it was such a sharp turn but I didn't care too much because I figured I was on track to be under the women's record. By the 3rd chug I had a big enough lead on the guys behind me that I wasn't worried about being passed and my chugging was really what was getting me the lead so I wasn't worried about getting passed. I'd actually stop chugging and take a breath because I was outchugging everyone by so much I could do that and still make it out of the exchange faster. The only person outchugging me was the guy in the lead and he was killing it! 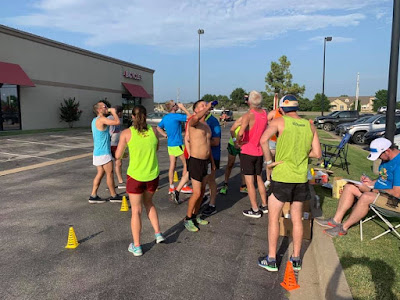 Going into the last chug I went into the station right behind the guy in 2nd and beat him out of the station. He pulled up next to me at the start of the 2nd loop and I had my drunken "who cares" attitude and just let him go. I looked at my watch and I was around 8 minutes so I knew I'd finish under 9:00 and that was all I really cared about but I wasn't even processing that very well. The next day thinking back I was like, man I could have beat him. I think he finished within seconds of me. Honestly I wasn't super sure how many people were ahead of me because I lapped some people and I had beer in my system. It wasn't until one of my friends told me I placed 3rd that I even knew for sure what place I had finished. Immediately after finishing I was like, "I don't even feel drunk." Then as I walked away I was like, "Oh yeah, I'm definitely drunk!" I don't know what exactly it is about the beer mile, I think mostly that it's something different and a different challenge but I have so much fun with it. I finished in 8:42 and I know I can do it faster without the silliness of thinking I still had beer in my can at the start and on fresh legs. I'm excited to try to beat my time next year. Strava took out all the beer chugs and said I ran the mile in 6:10! I was super impressed I wouldn't have even guessed I could run a mile that fast right now even without having beer sloshing around in my belly! 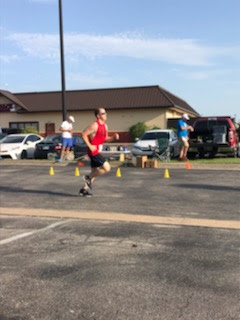 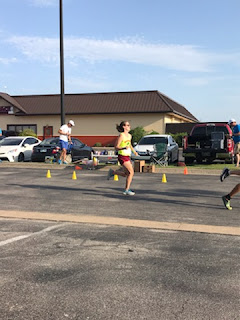 I think running the race in the evening after a 15 mile morning long run wasn't as bad as running it shortly after racing a 5k. My stomach was pretty empty which helped with the beer consumption but my legs weren't as dead as they usually are during the Ugly Sweater Beer Mile. I think the fatigued legs at the Ugly Sweater plays into me slowing down at the end as much as the beer does. At this one I didn't feel like I let up at the end nearly as much as I do at the Ugly Sweater. I definitely didn't run it balls to the wall either though. y finished around 10:30 and actually beat a few people. I was impressed that one of the guys I beat was an Olympic Marathon Trials Qualifier! And pretty much every guy there is faster than me in any race distance there is. The guy who got 2nd outkicked me at the St. Patrick's Day 5k and he was probably one of the only ones I'd even be close to in a race. Ty did the relay which meant he chugged another beer and ran another quarter. His team was behind by quite a bit but he was able to catch them back up. They later squandered the work he did but it was still impressive to see him really push it on the relay! I had a blast but would have to say 48 ounces of beer is definitely way too much for me. I woke up to go to the bathroom at midnight and was still feeling the effects of the beer on my system. There was no way I was getting up early the next morning for a run and I lucked out that it was under 90 degrees the next evening when I ran! Read about the Ugly Sweater Beer Mile in 2018 here, 2017 here, and 2016 here.
Posted by Liz Runningmomma at 3:01 PM