The state park that I've had up next on my list for a while was Robbers Cave State Park. It sounded like a lot of fun and is about 2 hours away from us. So when I saw they were hosting an evening trail race there this summer, I was really excited. Ty said he would sit out with the kids while I ran but later they posted that every adult entry would give you a free entry for a child. We decided to go ahead and sign Ty and the kids up. Later my parents decided to come camp with us and do the race with the kids so Ty got to actually run the 5k. We were all signed up for the trail course but there was also a gravel choice. After arriving on Saturday and hiking some of the trails we decided the trail course would be too much for the kids so we switched mom, dad, and the kids to the gravel course. We arrived on Saturday a little after 11am and spent the day setting up camp, hiking, swimming, and fishing. It was a busy day and both the kids were pretty tired going into the race. More on our camping experience to come. 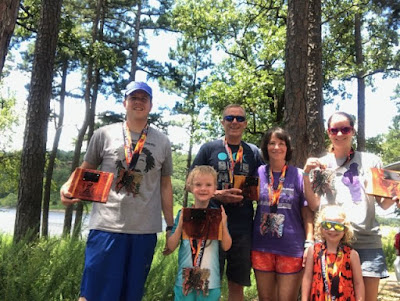 The race had a 5k, 10k, 25k, and 50k option and you could run on either trail or gravel. I knew when I signed up from talking with friends who had been out to the state park that the trails were pretty rocky. I went into it expecting all my miles to be 10:00 pace or over. I kind of wanted to run more than a 10k but wasn't willing to commit to 15 plus miles so I went with the 10k and ran a mile warm up and cool down to get 8 miles in for the day and I was so glad. It was the perfect distance for the day and I had a blast! The fact that the course was one 5k loop that repeated to get each distance also played a factor. I would rather run 2 loops than 5 loops! The Tuesday before the race I ran 8 miles at Turkey Mountain starting at 6pm and the temperature with the heat index was 110 degrees. I was prepared for it to be blistering hot and the race was cupless, meaning they would have water out on the course but you had to carry your own bottles to drink the water from. I brought my fuel belt since it was likely to be hot. As the day wore on, I got more and more excited for the race! The kids were pretty excited too. It would be both of their first 5ks since 5k was the shortest distance available.

The 25k and 50k started together at 7:00 and then the 5k and 10k started at 7:15. I knew the trail was single track so once I caught up to some of the tail end 25 and 50k runners, it might get a little tricky trying to pass. I also wanted to get out and around as many people as I could so I wouldn't have to do too much passing. I started toward the front of the race. The gravel and trail races started together and then the gravel course continued on the gravel while the trail turned to the left and onto the trail. I was surprised when we turned onto the gravel section and we had a giant hill about a quarter mile long to trek up right at the start. There was a girl who shot out way in front and then there was a man between me and her. Partway up the hill the man started to walk and I cruised past him. I slowly chipped away at the girl's lead as we ascended the hill. By the time we turned onto the trail she wasn't far ahead. My plan going into the race was to run conservatively for the first lap to get a feel for how technical the course was. Then I'd pick it up on the second loop. I planned to maintain my distance behind the girl in front and not let her pull away. Then I'd see if she was running the 5k or 10k when we finished the loop and if she was running the 10k I'd take off on the 2nd loop.

We hit another long hill right before the mile mark and I quickly reeled the girl in. I was almost walking to stay behind her and she was huffing and puffing. She pulled to the side and waved me around her. I felt great so I was fine with going on around her but I was a little disappointed that I'd have no way to know whether she was in the 5k or 10k because I'd make it to the finish area before her. My Garmin showed my first mile was 10:30. That didn't surprise me at all because we had 2 really long, steep hills in that mile. That section of the trail was also really technical. During the 2nd mile I started catching up to some of the slower 25 and 50k runners. Most moved over to allow me to pass but there were a couple I had to walk behind for a bit before getting the chance to go around them. The course was marked incredibly well with orange flags tied to trees really frequently on the course. I was mostly able to look down for rocks and roots while watching in my peripheral for the orange. I had a couple times I ran toward a tree with orange painted on it rather than a flag tied to it so I had to stop and look around for a moment to find the tree I was actually supposed to run to. Mile 2 was 11:03. I felt like that mile was the most difficult of the race with the trail being very technical so I fully expected it to be the slowest of my loop.

I knew I was ahead of everyone, male or female, in both the 5k and 10k and was having such a blast. I got excited, thinking if I was in front of all the men, it was likely Ty could place in the top 3. That got me even more excited as I ran. It was nice to be able to fully run my own race and not worry about other racers around me. I ran very comfortably hard. When I came up on the 3rd mile we popped out of the trail and ran along what was a gravel road with grass growing down the middle but I thought it was just a gravel section of trail that was really overgrown. It wasn't until after the race that I realized what that section of the trail was. We turned left and then ran down the giant hill we had come up. I really got moving on that downhill and was flying by 25 and 50k runners. By the time I got to the end of the hill I was running under 7:00 pace. My 3rd mile was 9:38, thanks to that monster downhill. I went through the first loop in 32:21. My goal was to run the second loop faster so I told myself I needed to finish in 64:42 or under. I took off up that giant uphill again and it was definitely harder the second time around. I was almost to the top when I saw the girl I had been running behind coming down the hill. I knew even if she was in the 10k, I had a good 5 minute lead on her and I was feeling really good! When I finally made it to the turn off to the trail course I was so ready to be done with that hill. After cresting it, I told myself I just had one more big hill in the first mile. I hit the mile mark a little before the next hill this time around. My 4th mile was 10:00 and then I got to go up that next hill. It definitely felt longer and harder than it had the first time around. I also didn't have the nice pick me up of passing someone up the hill like I had the last time. 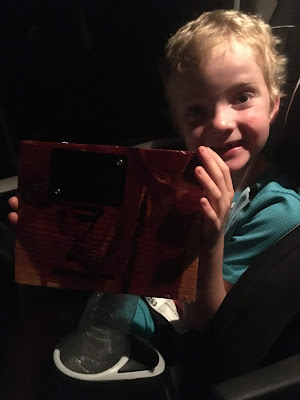 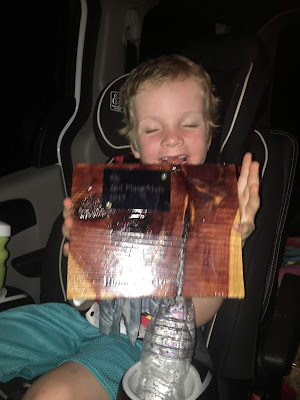 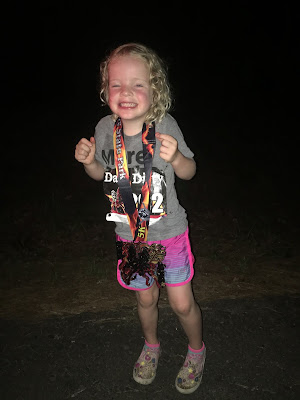 I finished 1st out of 32 finishers in the 10k with a time of 1:04:16. I ran my first 5k in 32:21 and my second in 31:56! The races were all heavy with females and I was 1st out of 21 females. I was surprised when I saw how outnumbered men were in the race! Ty was 2nd out of 28 finishers in the 5k and 1st of 13 men with a time of 40:31. Carter finished the 5k in 1:18:17 and dad finished in 1:18:21. Elise finished the 5k in 1:43:10 being carried the last half mile by Ty. Mom finished in 1:47:02. She said next year if we do the race again, she'll hang out at the campsite with the kids! Of all the trail races I've run, this was the most technical, but also the one I enjoyed the most! Armadillo wasn't quite as technical but I struggled a lot more because the first half was relatively easy terrain whereas the second half was really technical and I ran the first portion fast not realizing that and really struggled when I got to the technical section. That race was what taught me to run conservatively at the start of trail races, just in case! This was such a fun race and a wonderful state park experience! Look for more on our camping experience to come. 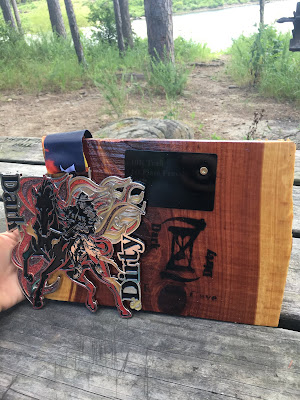 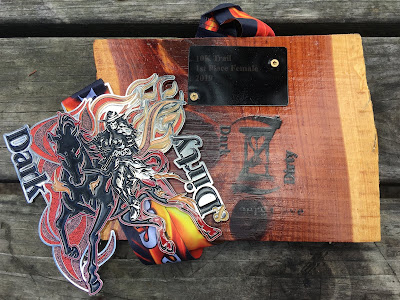 Posted by Liz Runningmomma at 12:39 PM