I knew Christmas this year would be even more fun than in the past since Elise is old enough to open presents on her own and Carter is old enough to really get excited and it did not disappoint. This year was my favorite Christmas to date and I know next year will be even better! On Christmas Eve morning I got up with the kids and we finished up some Christmas crafts and activities before Ty woke up. I wanted to get my long run in on Christmas Eve morning so I could have all day on Christmas to just relax and enjoy time with family. Ty offered to take the kids to pick up some food items we needed at the grocery store that morning so I could get out for my 10 mile run. It worked out perfectly with me arriving home in time to mix some Gatorade powder and eat a hard boiled egg before Ty and the kids walked in the door. They had gone to Sam's and ate lunch there so they brought me back a slice of cheese pizza which I scarfed down before quickly showering and laying in bed with Carter for his nap. My parents arrived a little bit before I laid down with Carter so we told him he could get out of bed to say hi. He was so excited he couldn't sleep after that so we just laid in bed and rested for about an hour before we got back up. We helped Oma and Opa unload their sleigh, I mean car, full of presents! Then Thomas and Jeremy headed over a little while later. I had planned too many things to get done in a short period of time, but we were still able to make sugar cookies and then decorate them with enough time left in the evening so Carter could choose a couple for Santa. We rolled out the dough and pressed out cookies using cookie cutters before dinner. Then I baked them during dinner and we decorated them after dinner once they were cool. My mom made a delicious dinner for us and brought it with them, just reheating most of it and making dressing at our house. Carter was excited to have sparkling blueberry juice and wanted to cheers with everyone. I tried cheersing with Elise and she got confused telling me "duece" which means juice and holding out her cup toward me. Elise helped Carter put out cookies and milk for Santa. She was really upset he wouldn't let her eat one of the cookies but we were able to get a decent picture of them both before they headed off to bed. 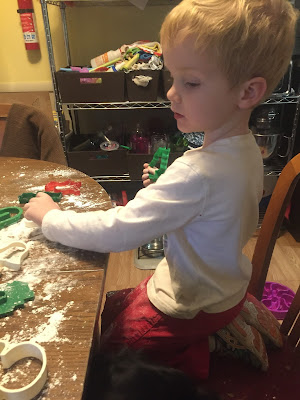 Each year on Christmas Eve I lay in bed so excited, thinking about how excited the kids will be in the morning. This year I fell asleep a little faster than last year but still woke multiple times throughout the night and excitedly checked the time. Finally I woke up at 7:30 and was shocked both the kids were still sleeping. I laid in bed resting and waiting for them to wake up. Both kids slept until almost 8:00! I heard Carter talking a little bit before 8 and jumped out of bed. I was afraid I had missed him wake up and he had already gone into the kitchen and was talking to Oma and Opa. I really didn't want to miss his reaction when he saw what Santa had brought for him. Luckily for me, he was just talking to Harper. He was changing his jammies because he had pottied through his pull-up. I was a little bummed he and Elise wouldn't be wearing matching jammies on Christmas morning. The first thing he said to me was, "Can we go see if Santa's cookies are gone?" We checked and they were, in fact, gone. Then we discovered Santa had left him a few small things under the tree in his room. He had a mug with a hot chocolate packet in it along with a PJ Masks coloring page and some paintbrushes and a paint tray. Elise woke up shortly after Carter and we checked out what she had under her little tree. We decided to head into the kitchen to make hot chocolate and color the PJ Masks pages. Elise was super excited about her hot chocolate and started chugging it down right away. Oma and Opa got up while the kids were coloring and Carter checked out what Santa brought him. He started exclaiming all kinds of adorable things as he looked around at the presents. My favorites were, "Why did Santa bring me things I like?!!!!?" and "Santa brought everyone things. He's a nice guy!" Elise immediately started piling things in her stroller and walking around the house. While I was putting together Carter's car toy, Ty woke up and headed in to make breakfast for everyone. Jeremy and Thomas arrived shortly after that. Once everyone had eaten breakfast we opened Santa presents and then checked out our stockings. Carter played with Santa presents for a while before we moved into the living room to open the rest of the presents. 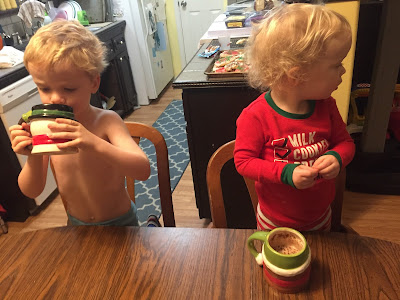 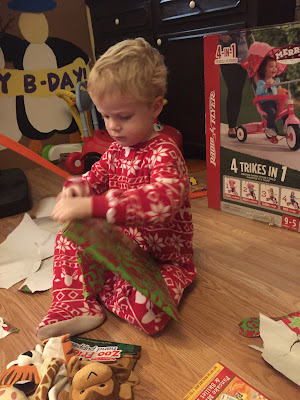 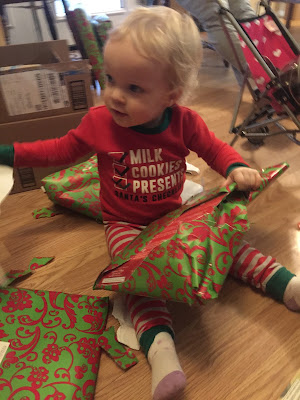 We sorted all the presents before we started opening them. Even so Elise tried to rip open a few presents before we were done passing them all out. Elise loved opening presents, ripping paper was her favorite! She tried to open all of the presents around her, even ones that weren't hers. Carter did a great job passing out presents by looking at the first letter of the name on the tag. Carter still wanted to stop and play with almost every present he opened. Elise would get distracted after each present she opened. Carter kept getting excited and exclaiming about how each thing he opened was, "What I always wanted!" When the kids were finished opening their presents it was time for lunch. We made the kids lunch and then they went down for naps. Carter again couldn't fall asleep at naptime so we just laid and rested for a while. When we got up, the adults opened presents while Carter played with his new toys. We played our traditional game where you guess what your present is and get points for guessing correctly. Mom ended up winning with 8 points. After Elise woke up from her nap we took Christmas cookies to a couple of our neighbors and then decided to head out for a walk with Carter's big wheel he got as a birthday present and Elise's trike she got for Christmas. We made it about a quarter-mile out on the trail before Carter decided he was done riding his bike and took off running. He fell and slid on his knees, scraping them all up. I decided we should turn back toward the car and around that time it started sprinkling. Then shortly after it was pouring down so hard it felt like hail was hitting us as we headed back to the car. Ty put Carter on his shoulders and carried Carter's bike in one hand with Harper's leash in the other. I was carrying Elise's bike, dad was carrying Elise and had a dog leash while my mom was carrying Benny and Jeremy had both of his dogs. It was quite the circus. We rushed back to the car and tried to get the kids in the car as quickly as possible. As dad was running around from the side of the car where he'd put Elise in to his car, Ty had started shutting our hatchback after loading the bikes, the timing was just perfect that the hatchback slammed into dad and then opened back up again. I know it shouldn't have been, but it was funny! When we got back Carter was being really fussy over being wet and having hurt knees so he and Elise took a bath to warm up and then I made them both hot chocolate. After the kids were in bed we sat down to play a new game we got as a present called Speak Out. It's the one where you put the plastic piece in your mouth that makes it hard to talk. I'd seen videos of people playing it and really wasn't interested in it, but we figured since we had it we would try it. The game was hilarious and we had a blast. At one point I somehow accidentally spit my mouth piece out and Thomas was moving his mouth around to make different faces and had me and my mom both laughing so hard we were crying. I'm looking forward to playing it again on New Year's! Bad weather aside, it was a perfect and beautiful Christmas day! Read about Christmas 2015 here, 2014 here, and 2013 here. 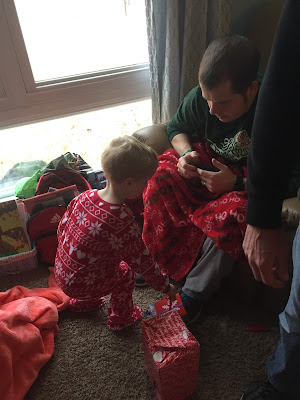 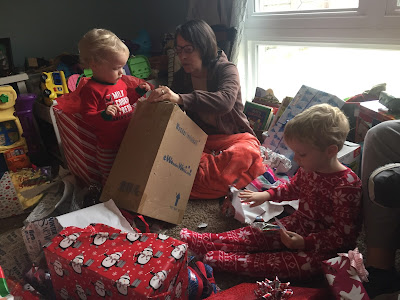 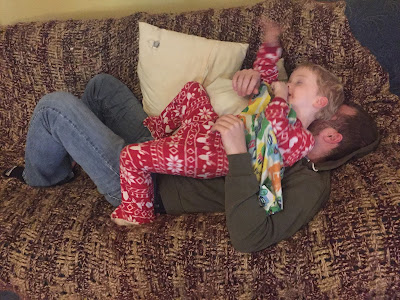 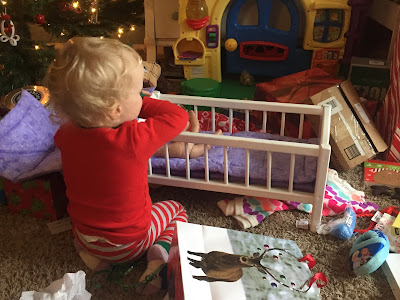 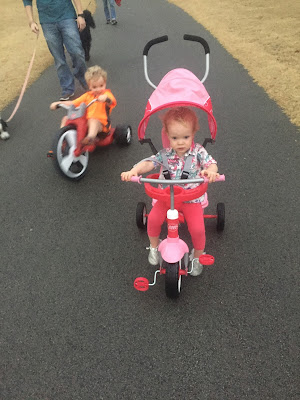 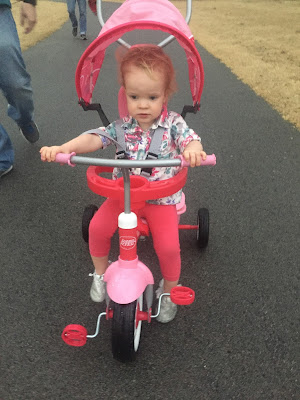 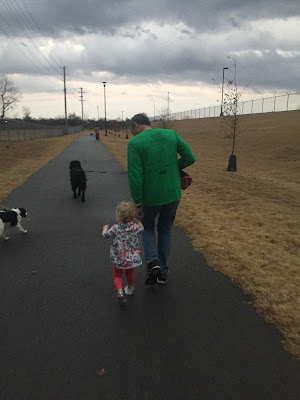 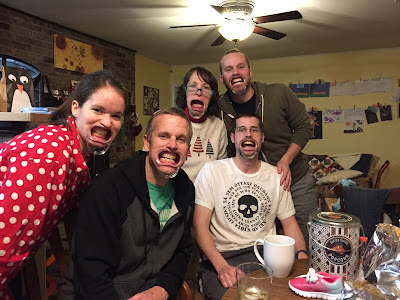 Posted by Liz Runningmomma at 12:28 PM