When we talked about days of the week and started a daily calendar routine I started forming a learning theme on months in my head. Carter didn't really have a concept of months and due to that had a hard time remembering when his birthday was. He recalled certain holidays and used them to make a time frame similar to months. He called October, Halloween time and has been asking when Christmas time and winter will be here. I figured it was the perfect time to start discussing months and I used the holidays and seasons to help him frame months into time frames that make sense to him. A main focus was discussing his birth date and helping him recall what day he was born.

The highlighted objectives below are ones Carter received exposure to during our theme this week:
I adjusted Elise's objectives for this learning theme. I feel she is now ready to start working on skills rather than just being exposed to different things. I looked at the objectives I had for Carter during his first few learning themes when he was about the same age Elise is now and adjusted them to fit her needs. The experiences Elise was exposed to during our theme this week are highlighted below:
Activities/Movement: 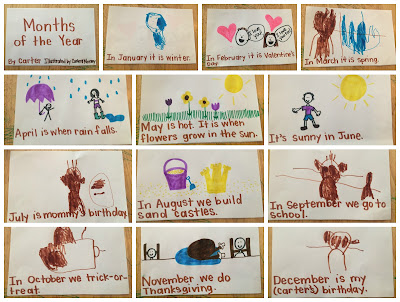 Posted by Liz Runningmomma at 1:05 PM