Carter's birthday was on a Wednesday this year. The Saturday evening before his birthday he told me his stomach hurt on the way home from a friend's house. He said he felt like he ate too much junk. He had eaten a doughnut that morning for breakfast but I was skeptical that was really the case. After we arrived back to my parents' house he threw up probably a total of 5 times before bed. But then Sunday he was back to normal. Tuesday night after dinner Ty got sick and threw up. Then as I was rocking Elise before putting her down for bed she threw up all over me. She threw up a total of 3 times that night. Once she seemed to be out of the clear, I put her to bed and she slept through the night. I got so excited for Carter's birthday, I stayed up too late working on stuff for his party and preparing for the following day. Ty went to bed early since he was sick so I didn't have him as the voice of reason and stayed up until almost midnight. I hung streamers in Carter's doorway and stuck a bag of marshmallows, a candle, and a lighter in a drawer of my bedside table for when he woke up. Carter woke up before I did and ran in to tell me about the streamers in his doorway. He was so excited saying, "Mommy, did you know there are streamers in my door?!" When I told him yes he asked if I had hung them there then he said, "How did you do it so sneaky while I was sleeping?" It was so cute! Once he climbed up onto the bed between me and Ty I pulled out the marshmallow, stuck the candle in it, lit the candle, and sang him Happy Birthday. He giggled little excited giggles the entire time and then just ate a portion of his marshmallow. 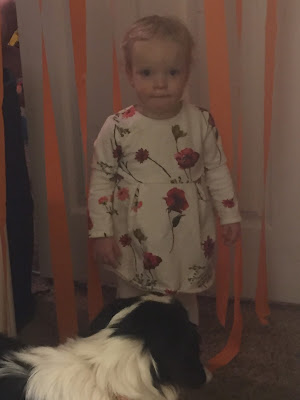 Elise woke up shortly after Carter and when I went in to got her I discovered she had thrown up either during the night or shortly before waking up. We went into the kitchen to eat breakfast and the kids played with balloons while I got things ready. I let Carter pick one present to open first thing in the morning. He started mumbling about how he really hoped it was something PJ Masks as he started to open it and my heart sank because we hadn't gotten him anything PJ Masks at all. I had picked things up throughout the year to make it easier on our budget since his birthday is so close to Christmas and he wasn't obsessed with PJ Masks then. Once he opened the Mr. Potato Head he turned to me and excitedly exclaimed, "What I always wanted!" I thought it was sweet since I knew it wasn't what he had been hoping for. Carter was absolutely desperate to make his birthday cake he had picked out at the grocery store. I told him he'd have to wait until after we took a special birthday bath. Since Elise had throw up matted in her hair, I wanted to give her a bath first thing. As I was getting the bath ready I told Carter the story of the day he was born. I told him what we had been doing at that exact time 4 years ago. To make the bath special for his birthday I let him pick out what color he wanted it to be and we also added bubbles. He'd never had color and bubbles in his bath at the same time before. I also threw in a couple of small balloons as well as his and Elise's penguin rubber ducks I got for the treat bags at his birthday party. While the kids were bathing Gma Facetimed us to tell Carter happy birthday. It was cute because Gma asked Carter why he was taking a bath in the morning and he said because it was his birthday and he was having a special birthday bath. Many times throughout the day he referred to himself as the birthday boy and it was just so cute! 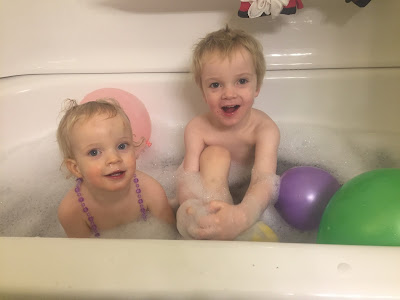 After Carter's bath we made his birthday cake. He couldn't wait to decorate it and once it came out of the oven he kept asking me if it was cooled off yet. I got out paint so Carter and Elise could paint while we waited. Ty got up around then after sleeping much of the morning. He was still pretty miserable but Carter sure thought it was awesome to have his daddy home with him for his birthday. I let Carter open another present which was an alphabet puzzle. He played with it while we waited on the cake to cool. Once it was cooled off enough he decorated his birthday cake. He had picked out blue frosting, lots of sprinkles, sixlets, and smiley faces made out of sugar. He wanted to eat a piece after it was decorated and I figured it's only your birthday once a year so I let him have a piece at snack time. He didn't eat much of it, I think his tummy was still feeling a bit sick. He had picked orange flavored cake which was absolutely delicious! Carter asked if he could open the rest of his presents. Normally I let him open one or two during the day but then have him wait until after dinner to open the rest so Ty can see him open them. Since Ty was at home we decided to let him open all of his presents. Each time he'd say he hoped it was PJ Masks and then would feign excitement when it wasn't. I appreciated that he was a good sport about it and acted excited about each present, but I also felt really bad about him not getting what he had hoped for. In my defense, he hadn't said he wanted PJ Mask stuff to Santa or on his Birthday/Christmas Wish List at all. 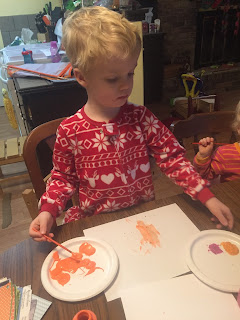 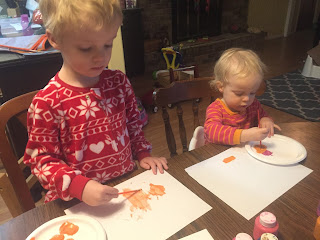 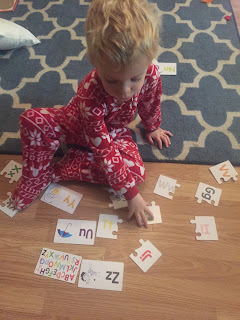 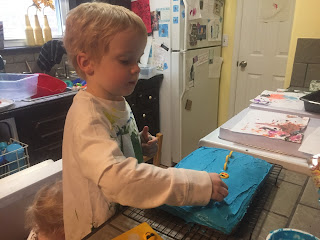 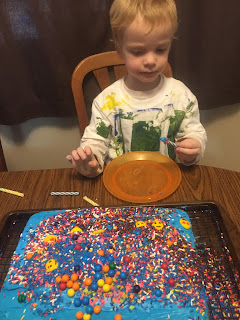 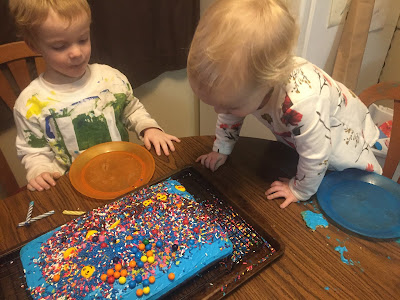 Carter's Gma and Gpa sent him a birthday card earlier in the week with a five dollar bill in it. He had decided he wanted to take Elise and Jake out to lunch on his birthday with his money. I thought that was super sweet and loved that McAlister's Deli has 99 cent kids' meals so we could actually do that! Jake didn't come to our house since Elise and Ty were sick so Carter, Elise, and I went out for lunch. As Carter was getting dressed so we could go he took off running to the bathroom saying he needed to poop. I ran after him and got there just in time to see him pull his pants down and have poo come out before he could sit on the toilet. I felt so bad for him but he was handling being sickly really well. Once I had everything cleaned up, including Carter, we got a late start heading out for Carter's birthday lunch. Carter was so proud to order his own lunch and tell the lady that it was his birthday.  They said they'd bring him cake but never did. As we were leaving it was significantly after naptime since we'd gotten a late start and they asked if Carter got his cake. They started rushing around to get him his cake and he wasn't feeling very good and wanted to get home for his nap so he said, "I don't want cake! I want to go home!" So they cancelled the cake and we headed home. 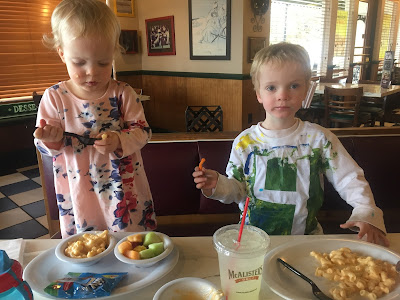 As I put Elise down for her nap Carter went into our room and laid in bed with Ty. I saw Carter laying in bed with Ty and it looked like he was asleep so I snuck back out to get some things done. Carter called out for me and told me he was just laying with daddy while he waited on me to lay with him in his room. I loved getting to lay with him in his bed as he drifted off to sleep. I couldn't help thinking back to the day he was born and how he drifted off to sleep on my chest. Now he was laying width wide across a bed taking up the entire section with his hand nestled into my hair spinning it around his fingers as he drifted off to sleep. When he was asleep I laid there for a while staring at his precious face and feeling so thankful for him and how wonderful he is! When Carter woke up I told him he could do anything he wanted. He asked to play PJ Mask games on my phone and was playing them when his Uncie Taco called to wish him a happy birthday. When Elise woke up they played Play Doh while I started to make dinner. Carter had requested a penguin pizza for his birthday dinner so we made a homemade pizza with olive wings and pepperoni feet as well as eyes and beak. Elise wasn't feeling up to par and was really fussy, not wanting me to put her down so I had a hard time getting much done. At 5:58 we sang Carter happy birthday and I had him stand next to me so I could drop the confetti from our birthday sensory bin over his head. He really loved it and it was so much fun to watch him stand and laugh as the confetti rained down on his head. He definitely felt special although he will never know exactly how special he is to me! Shortly after Oma and Opa called to tell him happy birthay. He made sure to tell them all about the accident he had earlier in the day and even took the phone in to show them where it happened! Then Carter helped me make the pizza and then during dinner his Gigi and Papa Facetimed to tell him happy birthday. It was a day filled with fun and lots of love. Although a yucky feeling tummy and some nasty poo were involved, Carter is not one to ever let something like that get him down! 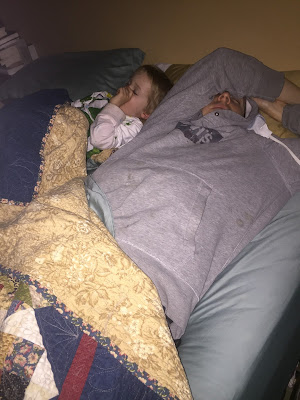 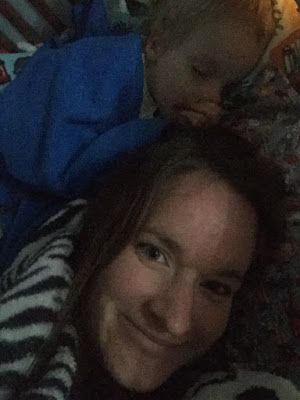 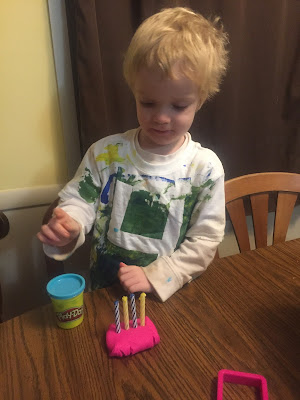 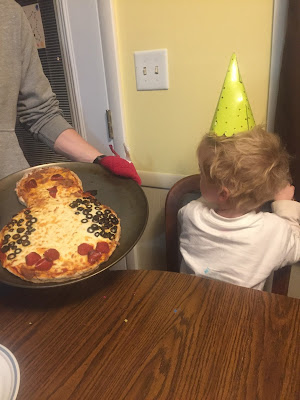 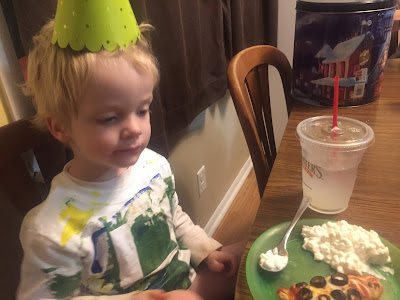 Posted by Liz Runningmomma at 9:32 PM