The other day I bought Carter a small pool.  Ever since I’ve been looking forward to playing in it.  I even got him a swimsuit and matching swim shirt a few days later.  We ran an errand this morning and ended up spending quite a bit of time in the car.  Carter napped most of the time.  We got home around 1:30 and I decided it was a perfect time to try out the pool. 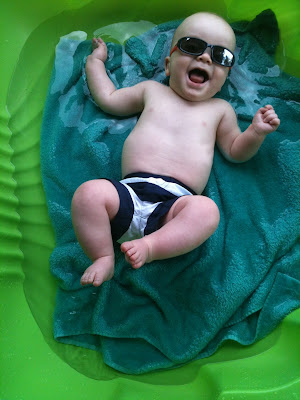 Thankfully Ty made a patio cover in our backyard right after we moved in, so we had a good deal of shade to work with.  Carter didn't even need his swim shirt because he wasn't in the sun.  I took him outside with me and he sat in the Bumbo while I washed the swimming pool and filled it with water.  I put the pool in the sun while we got our swimsuits on hoping the water would warm up.
When we went back outside the water was still chilly so I filled a mixing bowl with warm water from the sink and put it in the pool.  After 3 mixing bowls I felt the water temperature was appropriate.  I placed a towel on the bottom of the pool for cushion and rolled up one end like a pillow to keep his head out of the water.   I worry, probably too much, about water getting in his ears.  Definitely don’t want him getting another ear infection!
If the video doesn't work, you can watch it on youtube here.

He kicked and snorted and waved his arms around.  Eventually he worked himself closer to the side of the pool and would kick off the side.  I figured I would wait until he showed signs of being tired and then we’d go inside.  I was shocked that he stayed in the pool for about 45 minutes.  He sure was exhausted after we came in.  He ate and then took a little 30 minute power nap.  When he woke up he was ready to go about the rest of his day.
I had such a blast watching him play in the pool.  We will definitely be utilizing it again soon!
Posted by Liz Runningmomma at 9:06 PM