It turned out to be a viral infection and there weren’t any meds I could take.  I was feeling awful and would make it until Carter went to bed and then I would follow suit.  I went to bed around 8:30 each night.  I’m finally feeling better, thank goodness!  And luckily Carter hasn’t shown any signs of catching it.  Since I was told it was allergies initially I was still kissing all over his face, not worrying about spreading germs.


Ty was such a great helper while I was sick.  During the night he would get up and bring Carter to me so I didn’t have to get up.  You wouldn’t believe how nice that was!  It was so weird to roll over to check on Carter during the night and realize the monitor wasn’t on my side.


Yesterday was Carter’s 5 month birthday, but I was so exhausted I wasn’t able to do his photo shoot.  I started it today, but still have some more pictures to take.  I’ll be finishing up tomorrow, but will leave you with a sneak peak. 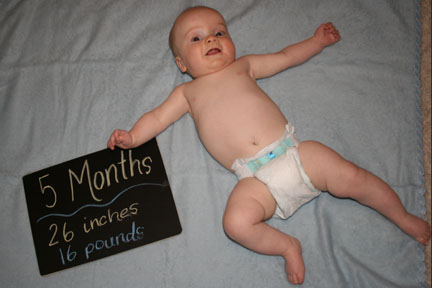