If you know a person long enough, well enough, you will eventually start to pick up on things you would not of a stranger. My wife for instance, I can tell if she is truly happy by one quick glance of her eyes. I have always told her she has an amazing smile, but that I truly love seeing her smile in her eyes. And, consequently, it is starting to look like my son will have that same quality, that beautiful smile that you can see in their eyes.

Something else I pick up on with my wife is her mischievous smile. She doesn’t flash it often so when she does, I am instantly curious because I know it will be interesting.

I got home from work on May 4th, 2012, walk in the door and glance down the hallway and I am greeted by her mischievous smile. Interests peaked; I slowly walk down the hall studying her face. Finally I ask,
TY: “whatch ya doing?”
Liz: “nothing, I just peed on a stick”

Since I did not have baby fever or anything on my mind, I instantly started to wonder why she would pee on a stick. Where did this stick come from? Is it a special stick? Was this some new power struggle she was having with our dog Halle?

Long story short, she was talking about a pregnancy test stick. And sure enough, it was positive! And so were the second one, and third one, and fourth and fifth ones that we took over the course of the weekend.

By Sunday evening, with 5 positive tests, we decided to tell our parents (we debated waiting a few weeks but ultimately decided not too).

As we were skyping, I sent a picture of the positive pregnancy test to my mother’s email address. Once it went through, I told them that I had sent them a picture of some other improvement I had made outside but was too dark to show them.

We sat there patiently with huge smiles on our faces watching my mom open her email with my dad sitting right behind her, waiting to see the picture of what I think I told them was siding I had just put up. As soon as the photo opened, my dad realized what it was, immediately had a huge grin plastered across his face and leaned back in his chair.

But only for a second.

Once she processed what is was, she also was overcome with excitement. They told us congratulations and we all talked about how excited we were and guessed due dates and what not. And then someone brought up my Mom’s reaction (not sure who). Turns out, her first thought at seeing the picture was “why would they send us a picture of their remote?” I think that since we had told her we wanted to wait 3 to 5 years, this was the last thing they were expecting. Also, in her defense, it was not the best photo, especially if it catches you off guard!

All said and done, it was a very happy affair! 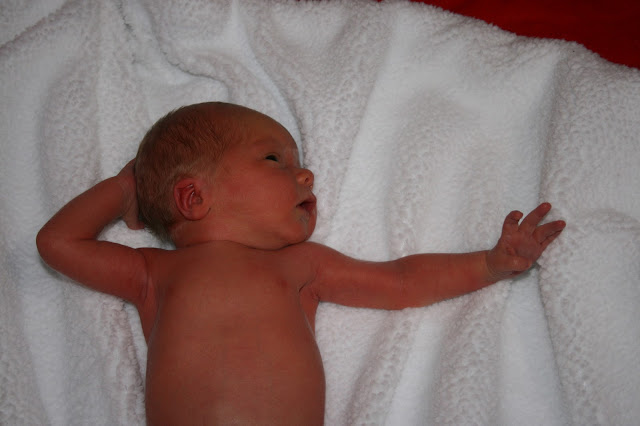 Posted by Liz Runningmomma at 4:53 PM