In the week leading up to the race this year I started really struggling with my allergies. Thursday I lost my voice due to drainage and I spent the night Friday night awake quite a bit due to coughing. I wasn't feeling very good but I knew it hadn't seemed to effect my running so I was hopeful the race would still go well. I didn't have a time goal since I'm so far removed from my goal race the first weekend in April and haven't run any hard workouts since March (outside of races). I wanted to run faster than last year and hoped to continue my winning streak as I've been the top overall female the past 2 years and won the year before Elise was born as well. Saturday morning Ty let me sleep in since I hadn't slept well that night. I woke up because I heard the kids at 8:30 which I was thankful for because I had planned to leave the house to run my warm up to the race start around 9:00. Thomas decided to run to the start with me and then realized he forgot to use his inhaler so we went back home. Then we headed back out and heard someone behind us. I turned around to see Jeremy coming up behind us. We ran our warm up around 9:00 pace and it didn't feel super slow so I was a little concerned about how the race would go. I told myself if I'd run 6:55 pace for a half-marathon 2 weeks ago I should still be able to run 6:35 pace for a 5k now and that made me feel better. I knew if I could average that pace I should be able to win the race. 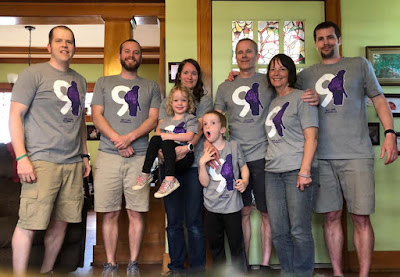 They had an obstacle course set up on the football field for kids. Before the 5k started Carter was doing the high jump and slipped because the mat was wet. He fell on his arm wrong and it was really sore. He said he thought it was broken so I had him move it around and I felt it and it appeared to be fine. After we got home and had eaten lunch he was complaining about it again and saying he wanted to go to the doctor. It was a little swollen and there was a teeny tiny bit of bruising. I was still confident it wasn't broken but thought maybe it was sprained or something so we went ahead and took him to Urgent Care. It wasn't broken. The doctor said it was possibly a bone bruise. It hurts him a little off and one but seems mostly back to normal now. I was glad it wasn't anything serious! 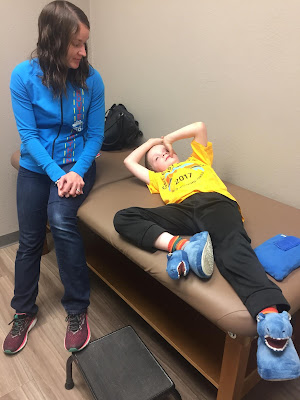 We chatted with one of Thomas' friends he ran on the 4x800 with in high school before the race and then they did a countdown from 9 for the race start since Dylan's number was 9. The race is in his honor. We took off and there were a lot of young looking boys at the start. I got boxed in pretty much right away and saw Jeremy and Thomas had gone out into the road to get around the masses so I hopped down onto the road to get around. I caught up to Thomas and we were running side by side as we came up to a huge puddle which we ran right down the middle of. I got cut off a few more times when we got onto the Watco trail portion of the race because people wouldn't see the large balls in the middle of the trail to keep cars out until they were right on them due to the crowd. By the half-mile mark or so the race had thinned out and it wasn't so bad. I went through the first mile in 6:34 and knew that was 2 seconds faster than my first mile last year so I was happy with that. When we came out around Lincoln Park I saw how many young boys were out ahead of me and figured there were either a lot of fast young kids this year or I'd be passing a lot of people in the last mile. It turned out there were quite a few fast younger runners as 4 of the 8 people ahead of me were boys under the age of 18. I also passed a few runners toward the end of the race as well. When we made our way into the parking lot near the baseball diamonds I could hear someone running along right behind me. He continued there for the rest of the race and never passed me. It started to make me feel tired toward the end to hear him right behind me.
I went through mile 2 in 6:33. I was pleased that my 2nd mile was faster than my 1st and I felt like I had a decent amount left in the tank. I took off and focused on Jeremy ahead of me, trying not to let him pull away from me too much. As we neared where we would get back onto the Watco trail headed toward the finish I didn't hear the guy running behind me anymore and didn't think much of it. It may have been because I was focusing so much on those ahead of me instead of the noise coming from behind me. I knew the race is actually 3 miles long rather than 3.1 so when I got to 2.5 I really took off. When we came up to the football stadium and turned onto the track I started picking it up toward the finish but also probably could've given it a little more. Then I heard someone yell, "You gotta go! He's coming for you!" I didn't know who was coming but I really dug deep and tried to really kick it in. It wasn't enough and he flew around me with about 50 meters to go. It was a guy in Jeremy's graduating class so I gave him a hard time and yelled, "Damn you, Warren," as he passed me. The guy taking pictures at the finish was also a member of the PHS class of 2002 and he said, "You just had to do it, didn't you?" We were all laughing about it. My last mile was 6:16 which I was impressed with! I walked over to Jeremy and we walked over to get some water together. Somehow I missed Thomas finish but saw dad come in and he looked awesome! I drank a bottle of water and then ran my cool down out to mom to run in to the finish with her. 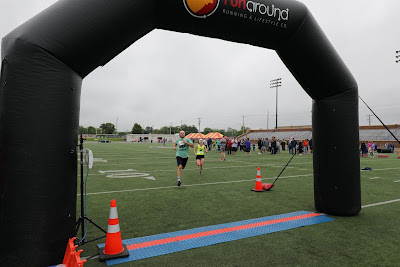 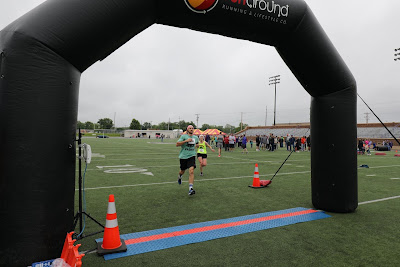 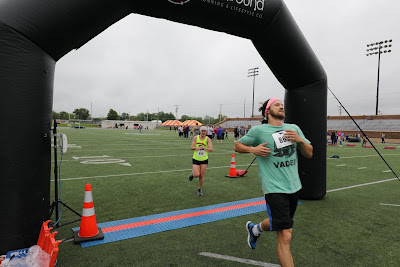 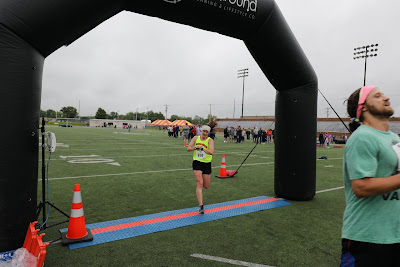 Jeremy finished 6th out of 137 overall and 2nd out of 20 in his age group in 19:05. I finished 9th overall, 1st out of 49 females, and 1st out of 18 in my age group with a time of 19:24. My time last year was 19:45 so I was really happy to run so much faster this year! The race course is supposed to have a partial lap on the track at the end of the race but that didn't work with the timing equipment at the finish line so they've just left the race short at 3 miles. Normally I'd get irritated about the course being short but this is one I do after my training season is over so I don't mind at all. Going into it knowing it's short makes me mind even less. This is one race that's all about place for me rather than time. Thomas finished in 20:43, good for 13th overall and 4th in his age group. Dad was 23rd overall and 1st in his age group in a time of 22:27. Mom finished in 34:03 which put her 11th overall and 1st in her age group but they did 50+ for the age group instead of the 60+ shown in the results so she got 2nd in that age group. Read about last year's race here, 2016's race here (2017's race was cancelled due to storms), 2015's race here, 2014's race here, and 2013's race here. 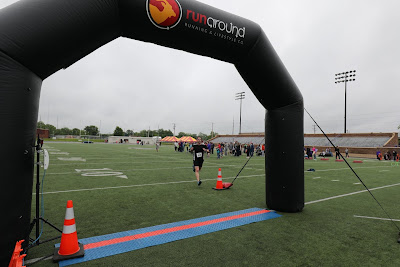 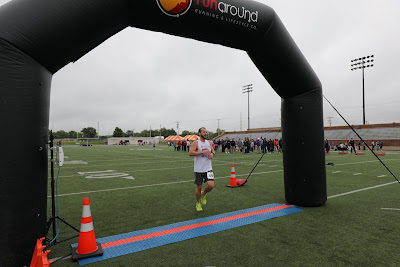 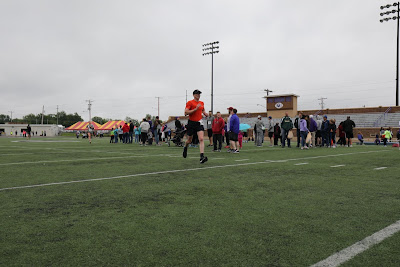 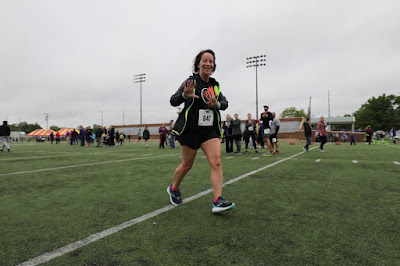 We've run this race every year single year since it was started. It's a special race for us as the Get Busy Livin Foundation was created in honor of Dylan Meier, a member of Jeremy's graduating class who died in a hiking accident. His football number was 9 and this was the 9th anniversary which was really special. It's neat to see how my running has blossomed over the past 9 years through my race results from this event. I thought it would be fun to document my results through the years here. This is definitely the longest stretch I've ever had with running a specific race and plan to never miss this one. This race is the only one that I would run no matter what, even less than a month after giving birth! 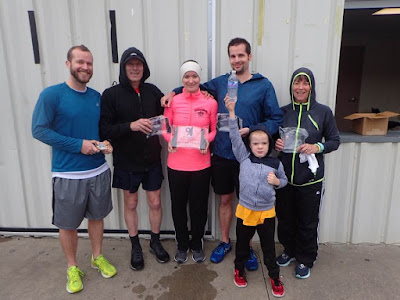 2011- I'm not sure what my time was but it wasn't very fast. I think I was somewhere around 23 minutes. I'd been running with Ty to help him train for our wedding day 5k so my training was very minimal and I was pretty out of shape. I finished 3rd in my age group.
2012- I was pregnant with Carter and didn't know it yet. I really struggled and my breathing was off. I was disappointed to finish in 23:18 and was 2nd in my age group but it all made sense later when I found out I was pregnant.
2013- Carter was 4 months old and I was just getting back into training. I finished in 23:06 which put me 2nd in my age group. I was excited to have run faster than I had the last year when pregnant.
2014- This was the first year I felt like I had a really strong race. I finished in 20:59 which was a postpartum PR and finished 1st overall female. Carter was 16 months old and it was a month after I miscarried the baby we lost between Carter and Elise.
2015- Elise wasn't quite a month old and I planned to run/walk the race since the farthest I'd run since she was born was 3 miles. I surprised myself by averaging under 8:00 pace and finishing the race in 24:27 which put me 3rd in my age group.
2016- They changed the course this year and it ended up being short. The course was supposed to include a partial lap on the track when we entered the football stadium but the equipment wouldn't work there so they set up on the infield and cut off about a tenth of a mile from the distance. I finished 1st overall female in 20:18.
2017- They had to cancel the race due to lightning and storms which I didn't mind too much since I was dealing with an injury and was on strict orders not to race this one, just run it easy. I really wanted to defend my title, so I was glad it was cancelled!
2018- I finished 1st overall female on the shorter course with a time of 19:46. I was quite surprised with how fast I was able to run considering I had just been running easily since my goal race at the beginning of April.
2019- I improved my time from the previous year finishing in 19:24 on the short course and finished 1st overall female. I again had just been running easy runs since my goal race at the beginning of April but had also added in a bonus half-marathon at the end of April so I was a bit more tired this year because I'd run 2 half-marathons in one month.
Posted by Liz Runningmomma at 3:51 PM