Saturday was the Get Busy Livin 5k which is run in memory of Dylan Meier, a classmate of Jeremy's from PHS who died in a hiking accident. For more information about the Get Busy Livin Foundation and Dylan's legacy, check out the foundation's website here. This was the 8th event and we have run it every year. Last year they ended up having to cancel the race after a long rain delay since the rain and lightning just wouldn't go away! They even pushed back the start time but the weather continued all day! The race is typically the last weekend in April but this year was the first weekend in May. Since the Aquarium Run is usually my goal race for the spring and it is run the first weekend in April I'm usually in decent shape for this race but never top shape. This year I was hoping to be the top female finisher again since every year I haven't been pregnant or just had a baby I've been able to do that. The OKC Memorial Marathon Relay was the weekend before. I figured since I had averaged 6:55 pace for the first 3 miles of that race, 6:45 pace for the 5k was a reasonable goal. I planned to go out at 6:45 pace and then see if I could pick it up as the race went on. I was more concerned with place though and planned to just try to stick with whoever was the top female.
The morning of the race the weather was beautiful. It was already 60 degrees and not many clouds in the sky. I decided to run to the race start from my parents' house as a warm up. Ty drove the kids to the start so they could do the kids' obstacle course while we ran the race. I got about a mile and a half warm up in and then did the dynamic stretches the physical therapist gave me. Then I headed to the football field area to catch up with everyone. Right after I made it to the football field I saw Carter running with friends and fall down. He stood up crying and when I went over to check on him I saw he had hit his face on the wooden bench just right to really scratch up his face. It looked really bad but wasn't really bleeding so he calmed down quickly. Apparently he takes after his Uncle Paul and if there's no blood, he's okay with it!

The race started a little late. I stood with Jeremy and Thomas at the start. Jeremy asked if I was planning on 6:30's for the race and I said I was hoping for 6:45. We took off at the start and I felt pretty strong. I wasn't sure how the race would go because I'd gone to bed with a migraine the night before and my warm up hadn't felt very good. I was still feeling a little nauseous even as we were standing at the starting line. Once I took off running that went away and I was feeling good. I was running side by side with Jeremy and there was one woman ahead of me. I knew who she was from running against her in high school. I knew she was a good runner and didn't typically go out fast and slow down so I didn't want to let her get out of my sights. I went through the first mile in 6:36 which was faster than I had planned but my main goal was to stick close enough to the first female to be in contention. I felt really good too. When I saw my first mile was 6:36 I was afraid I'd slow down for each of the next two miles though. I passed into first female a little after the mile mark and then a girl I'd seen at the start but didn't recognize pulled up next to me. I told myself to keep pushing that 2nd mile so I wouldn't give them someone to chase. Almost immediately after pulling up beside me the other girl fell back off pace. Jeremy started pulling away from me a little bit so I focused on looking forward at him. We ran off the path we'd been on and into the ball fields. I was still feeling strong but the pace felt fast too.

I was really surprised when I saw I'd run the 2nd mile in 6:33. I really was convinced I'd slowed down during the 2nd mile and was pleased I'd actually run a little faster. I passed a few men in that mile and started preparing myself to pick up the pace for the last mile. I was tempted to peek behind me as I turned a few corners to see where the 2nd place female was but I wouldn't let myself. I told myself to just pretend whoever I heard behind me was a woman and I needed to keep pushing the pace to stay ahead of her. I was so tempted to check though because I also really wanted to just cruise in if I had 1st place nailed down. With a half mile to go I told myself it was go time and if a woman came up next to me, I'd have to sprint with all I had left. I was catching up to Jeremy a little bit but couldn't quite catch up enough to run with him. He was right with another guy and as we came up to Broadway for the finishing section toward the football stadium I saw no one was stopping traffic. Jeremy and the other guy took off across the street with plenty of room between them and the cars coming toward us. The cars saw them and stopped which gave me the chance to go across the street without having to stop which I wouldn't have been able to do otherwise. I was pushing as hard as I could but was still just so certain I'd run my last mile as my slowest. When we made it to the stadium and turned through the gates to finish on the field I noticed I hadn't hit the 3rd mile yet. I attempted to sprint toward the finish but I didn't really have much left. My legs were pretty dead. My watch beeped for the 3rd mile as I crossed the finish line so I knew the course was short. I stopped my watch and saw I'd finished in 19:45. I figured that put me running a faster 5k than I had at the St. Patrick's Day race! 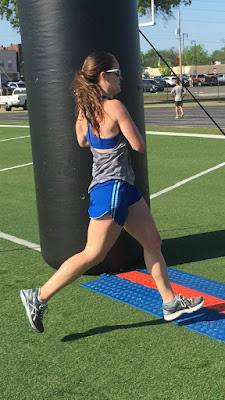 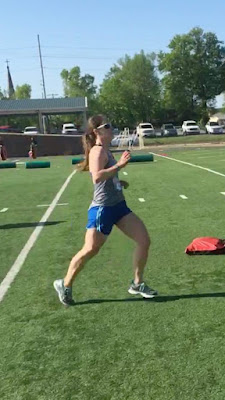 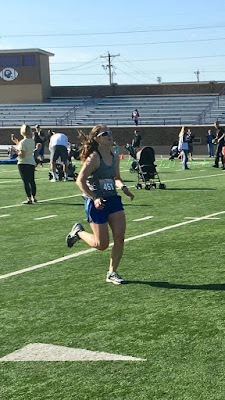 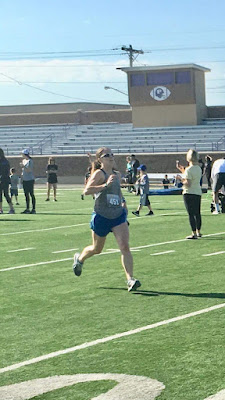 When I looked at my mile splits I saw I'd run the last mile in 6:32 and was shocked because as I ran I was so sure I was going to run that last mile in 6:40 pace. I guess even though I felt tired I wasn't slowing down like I thought I was. I was really pleased with my time. I had just hoped to finish in under 21 minutes so running the equivalent to around a 20:24 was really exciting! I finished the race with a 6:34 average pace. I definitely could have run the extra 0.1 miles for the race to be a full 5k but this was the one time you won't hear me complain about a course being short! I was definitely ready to be done and even though I knew the race was short I didn't finish out to 3.1 by running through the finish line like I'd normally do. I watched the next female finisher cross the finish line and congratulated her. We talked about how we'd rather run half marathons over 5ks any day as 5ks are just too fast! I was super excited about how the race went though. I haven't done speed work since March and have been running just easy miles since the half marathon on April 7th, outside of the relay leg I ran last weekend. I figured I'd be way more out of speedy shape than I was. It definitely goes to show that it's better to rest and be healed than to push through workouts and be injured. I ran faster in this 5k after no speedwork for 6 weeks but no pain than I did in the St. Patrick's Day 5k when I was in the thick of training but was dealing with pain in my glute and hamstring. I've finally figured out that I'm better off with a healthy body and less hard workouts than I am pushing through speed work with injuries. It may have taken me around 20 years but I'm starting to figure things out!

I watched Thomas and dad finish and then grabbed some water and headed out for my cool down. I cheered for mom as I ran by but didn't run in to the finish with her like I normally would since she was almost done by the time I started my warm up. I ran out and back and as I was coming back people were cheering for me that I was almost done. It was kind of fun to get cheers for a cool down! Jeremy was 3rd out of 155 overall and 1st out of 25 in his age group with a time of 19:40. I was 5th overall, 1st out of 74 females, and 1st out of 25 in my age group. Thomas finished in 21:43 which put him 16th overall and 6th out of 25 in his age group. Dad finished in 23:33 and placed 27th overall and 2nd out of 11 in his age group. Mom finished in 33:06, placing 114th overall and 6th of 13 in her age group. Ty played with Carter and Elise in the obstacle course during the race since he's just getting back into training and isn't in 5k shape yet. My friend, Erin, walked the 5k with her mom and planned to push her kids in the stroller. Ty told her he'd watch them too so she could walk without the stroller. He was a straight boss playing with and helping all 4 of them with the obstacle course. He said Carter and Hayden were easy because they did everything together. 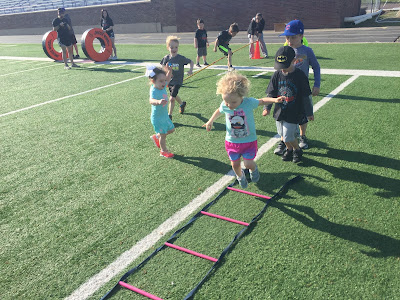 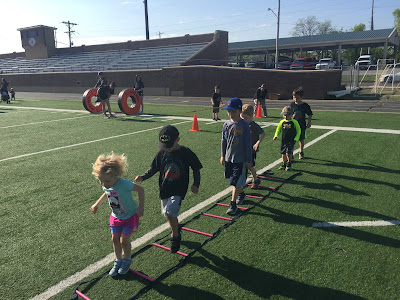 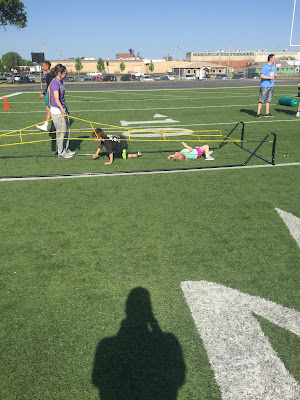 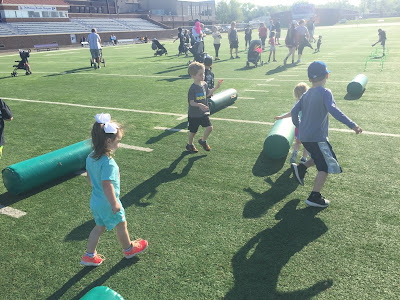 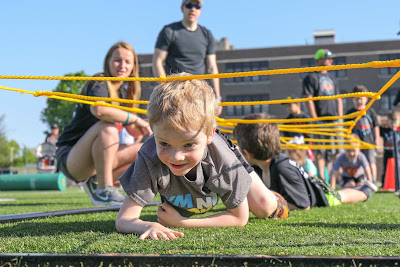 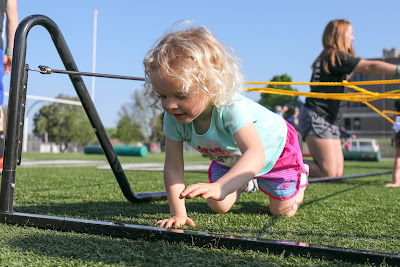 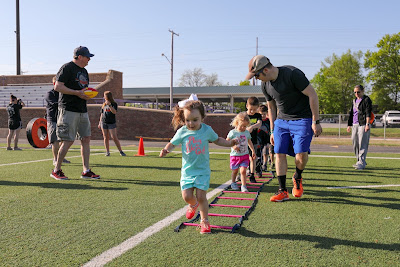 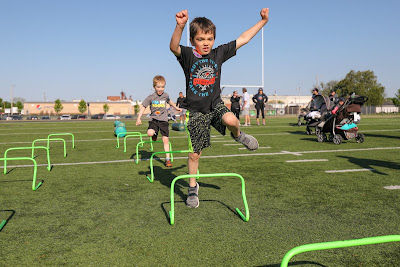 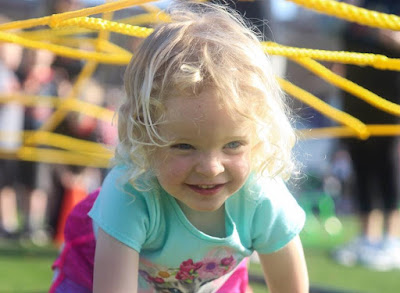 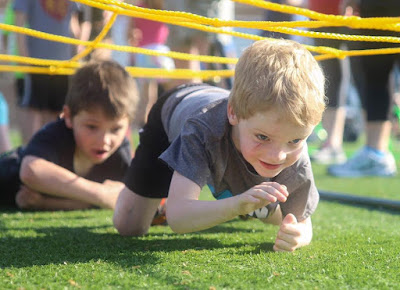 After the awards ceremony Ty said he'd like to run home so he could get a run in for the day. I decided to run home with him so Thomas drove the kids home for us. It was nice to have a couple miles to chat while we ran home. I'm still pretty excited about how the race went. I absolutely love going into a race with low expectations and then running way better than I had hoped! I definitely run best when I just run the pace that feels right and when I don't put pressure on myself to run certain times. My friend, Sara, posted about that recently and I have been feeling the exact same way. When I just go out and run I sometimes surprise myself and that sure is fun! In 2016 I kept doing speed work after the Aquarium Run and hoped to run a fast time at this race. On this same course I ran a 20:18 that year so I ran a lot faster this year with just easy runs from the Aquarium Run on! I'm definitely better off taking some down time after a goal race rather than attempting to keep pushing for a race a few weeks later. Read about 2016's race here (Jeremy's come a long way since walking his first full mile after his accident that year to placing 3rd overall this year!), 2015 here, and 2014 here.

Posted by Liz Runningmomma at 11:17 AM