During March I noticed Carter wan't hearing very well. His second ear tube from the procedure he had at 15 months had fallen out in February so I wondered if that was why he was having hearing trouble. I decided to take him in for a check up with our pediatrician and have them check his hearing. He failed the screening and was referred to the ENT who did his tubes back in 2014, read about it here. At our appointment with the ENT he recommended ear tubes again because his hearing test was below average and showed minimal movement in his ear drums meaning he likely had a lot of fluid build-up in his ears. Then he showed me Carter's tonsils and explained that they were so big Carter likely had trouble sleeping and eating. Carter's not really one to complain but he did nap until he was 5 and I'm thinking that was likely related to him not sleeping well at night. He snores so loud we can hear him from his room when we're in the living room at night. It wasn't until the doctor mentioned him having trouble eating that I connected the fact that Carter often chokes on food at dinner to the size of his tonsils. I never would have thought to look in his throat at his tonsils. I was shocked when the doctor had me look down into Carter's throat and I saw how enlarged they were!
We scheduled his appointment for the Monday after his last day of school because our doctor only does surgery on Mondays. He was to have ear tubes placed as well as having his tonsils and adenoid removed. Ear tubes was a very simple procedure with a quick recovery, read about Carter's recovery from tubes in 2014 here, but I knew the tonsils and adenoid would make for a more difficult recovery. I got lots of mixed reviews, some saying recovery wasn't that bad and others saying it was terrible. The nurse said to plan for Carter to be out for about a week. We made plans for Ty to be off work for Carter's surgery and then for my parents to come visit to help with Elise after the surgery so I could focus on Carter. I also stocked up with soft foods for Carter. We loaded up on Jell-O, pudding, apple sauce pouches, macaroni and cheese, yogurt, and string cheese. Carter was a little nervous about having surgery and didn't want to show his tonsils to anyone. It was cute because he called them his "tinsils" when he told people about it.

Carter's surgery was set for 8:15 and we had to arrive at 6:15. Ty and I got up at 5:30 and waited until the last minute to get Carter out of bed. He couldn't eat or drink so we just took him to the car in his jammies. One of Carter's friends sent him a good luck video the night before so he watched that on our drive to the hospital. He really enjoyed it and felt special. We got checked in and then Carter looked through a special bag Oma and Opa sent with us for him. He was very excited to see the movies he could watch when he got home. 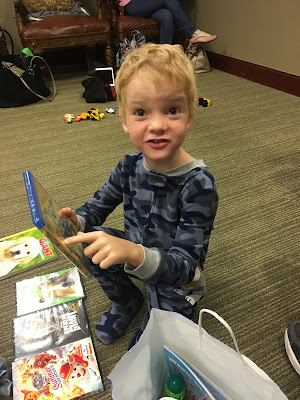 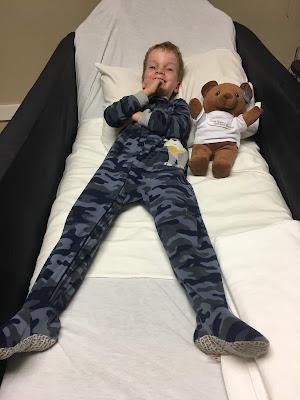 When we were taken back to a room Carter was given some "goofy juice". He wanted to play on my phone so I gave it to him and everything was very chill. When the nurse came back in to take him back for surgery I looked at Carter and asked him what he was playing. That's when I realized he was just staring at the screen while breathing really heavily. I asked him how old he was and he just stared at me. Then as he was wheeled out, he said, "Ssssssss." The medicine definitely chilled him out. Ty and I went back into the waiting room and knew the doctor would be out to see us in 30-45 minutes. They had a tv screen where you could monitor the surgery by looking at the number corresponding to your patient and checking to see if they were in prep, surgery, or recovery. We checked on Carter a couple times and then the doctor came out to talk to us. He told us everything went well and that he removed Carter's "giant, golf ball sized tonsils." When we were taken back to Carter's recovery area he was still asleep. He woke up shortly after we arrived and kept crying. He wanted all the bands and stuff off his arms but they wanted him to drink before they took the IV out. The nurse went ahead and took it out because she said she knew Carter would drink when he was ready. Eventually he fell back to sleep and slept for about an hour before waking up and drinking some Gatorade so he could go home. We changed him back into his jammies and headed out. In the parking lot Carter wanted me to set him down. When I did he stumbled around. I realized the medication wasn't as worn off as I thought. 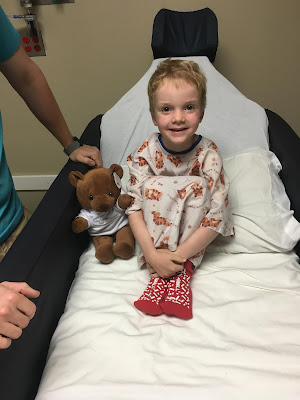 So far Carter's recovery has gone really well. He's rested up quite a bit: watching tv, playing board games, playing on the computer, and reading books. He's gotten to eat lots of soft foods and even had a smoothie we made. The only time he's unhappy is when we have to put the drops in his ears. He cries and says it hurts. We've stayed on schedule, making sure he gets medicine every 3 hours. We are alternating Children's Tylenol and Children's Ibuprophen. I have a chart where I track what medicine I gave him and at what time so I don't have to try to remember which medicine I need to give. Each time I give him medicine I set an alarm for 3 hours later so I don't have to watch the clock to make sure he gets medicine on time, my alarm reminds me! We plan to continue with medicine every 3 hours, even through the night for the first 3 days and then seeing if he can tolerate going longer between medicine after that. It's hard getting up every 3 hours at night but I know it's worth it so Carter doesn't feel any pain! Carter's voice is already sounding more clear and he didn't snore as loudly last night as usual. I'm so glad the surgery went so well and I hope his recovery continues to go as well.

Posted by Liz Runningmomma at 8:58 AM