Carter had his preschool graduation Tuesday morning. Elise and I dropped him off and just stayed for the program. We went to the restroom and then picked seats in the sanctuary. As we walked in they had a slideshow of pictures playing with background music. The first song that played was "Let Them Be Little." Until that point I had just been excited to be there but then I got a little emotional listening to the song. Next up was "Don't Blink". If you aren't familiar with those songs just google them and read a few lyrics and you'll understand! Note to self: at all future graduations and first dances at weddings for my children, don't listen to the lyrics! Holy cow! Ty arrived shortly before the graduation started and Elise was getting restless and saying, "I'm hungry," on repeat by the time the program started.
There are 3 pre-k classes and Carter is in the oldest class so he went last. Each class sang 2 songs and then each child got to walk down the steps to receive their bible and "diploma". It was cute to watch. The moment Carter walked out on stage, Elise's attention was returned. She stood on the chair and waved at him. I kept giggling because his gown was so long he was struggling a bit to walk. I could tell he was looking for us in the crowd and couldn't find us so I stood and waved so he could figure out where we were. They sang two songs. I was a little disappointed in the quality of videos I was able to take with my phone. The lighting washed the kids out really badly. I watched Carter, not my screen so I noticed a few times he was off-screen but I'd rather be present and have okay videos than be there but be watching my screen instead of the sweet boy in front of me! Elise also kept bumping into my arm and I had it zoomed in so it was a bouncy video. Carter was the 3rd student to come onto the stage so he was one of the last to receive his diploma. While he was waiting on the stage he did the two fingers at his eyes and then pointed at me to signal I'm watching you which cracked me up! It was such a sweet ceremony and we enjoyed it quite a bit!


After the ceremony we took some pictures and ate cookies. Ty had to return to work. Carter decided he wanted to go home with me since some of his friends were going home with their parents. I figured why not because next year I won't be able to willy nilly take him home from school so I might as well do it now while we have the chance! We ran an errand and then used a gift card to Olive Garden I received for Mother's Day to go out for a special lunch. It was such a nice morning and I'm so glad I went ahead and checked him out early. It's crazy that Carter will be starting real school next year! I now, almost officially, have a kindergartener! 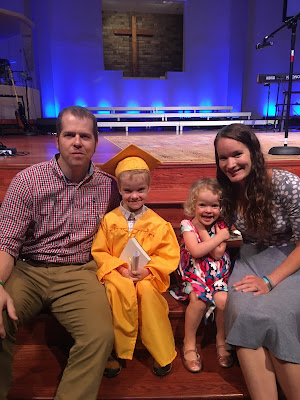 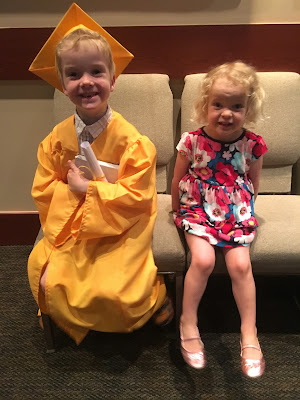 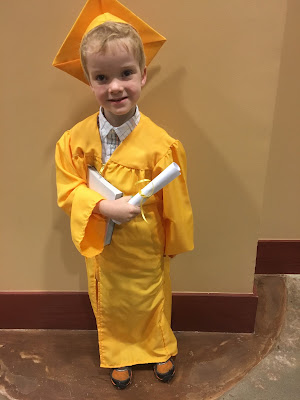 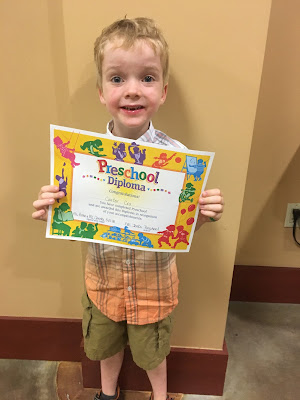 Posted by Liz Runningmomma at 11:40 AM