Walks in with a drum at bedtime. "I can sing you a midnight song."

"This is the best day ever! Oma and Opa are coming. We went to the Botanic Garden and we get to do new things like ride in Jake's car seat and drive in a new car!"

Me: We can't turn there.
Carter: Why?
Me: Because there's a sign that says not to.
Carter: But bad guys can because they make their own rules!

"I have an idea and my ideas always work!"

One morning at breakfast I helped Carter get a pancake and the peanut butter so he could spread peanut butter on his pancake. Then I headed over to make my coffee. He was a little grumpy and the following discussion ensued.
Carter: Are you over there just thinking everything is done?
Me: Yes.
Carter: Because nothing is ready as he points to his pancake he needs help cutting up.

Carter to Elise: Did your baby's water break? Because that's what happens when a baby is going to be born, it's water breaks. Should we go to the hospital?
Elise: Yeah, my baby's water broke and it cried. That's so sad.
Carter: No, it's not sad. It's supposed to happen. And your baby can't cry because it's in your tummy. Wait a minute the daddy's going poop.
I peek out to see Elise walk by with a baby doll up her shirt. She sits down and Carter pulls the baby out of her shirt.
Carter: Oh, it's so cute! Be gentle with the baby.
"This is how mans look, wearing a backpack and carrying a stick." 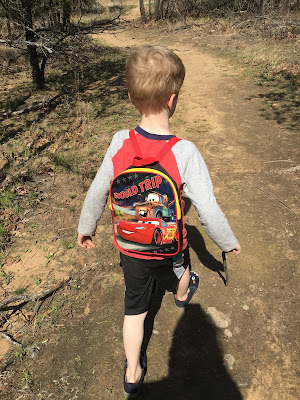 
Elise was on the potty and Carter was trying to look at her poop. She was moving so he couldn't and trying to push him away.
Carter: You always look at my poop!
Elise: Yep, I do!

Reading with Elise and she says just a minute so I stop reading. Then she stares at me for a while before scooping her hand up and saying, "Here's your mac and cheese!"

Me: What's in your pocket?
Elise: It a wipe. I need wipes to wipe my booty.

Posted by Liz Runningmomma at 2:02 PM