Carter Is 5: What He Says

Poor Mr. Carter Man woke up in the middle of the night throwing up. I was hopeful it was just something he ate and he'd wake as good as new, but after multiple wake-ups in the middle of the night, I knew it wasn't going to happen. I called to cancel his special doughnut order to take to school. They had already made it but said since he was sick, they'd just sell them. They had spelled out Happy Birthday and made a bunch of 5's, all decorated with orange frosting. It broke my heart a little to cancel it but I knew with him not feeling well, there was no way we'd make it to the store to pick them up before they closed. He was really okay with being sick on his birthday and getting to stay home with me and watch movies until he realized that meant he was missing his Christmas program at school. Then he started crying. He'd been practicing his songs for me and told me all about how in one of the songs he got to hold a giant candy cane. It really broke my heart knowing he'd miss out on that! Ty and I had just been talking about how Ty was sick last year on Carter's birthday so he was home with us which was a treat for Carter. He had gotten sick from Carter who was mostly recovered but still a bit sick on his birthday, read about it here. So little man is 2/5 for being sick on his birthday. Hopefully next year is better!
As we were getting out of bed Carter said to me, "I'm sorry you didn't sleep good since I kept waking you up, throwing up." I couldn't believe he was thinking of me when he was miserable and showed such empathy. I love his heart of gold! Later he said, "Will you keep that I'm sick on my birthday a secret because I don't it to get anyone sad." Oh my goodness, melt my heart! But I was the one trying not to cry thinking of him missing out on his birthday doughnuts and his Christmas program, but what can you do! Carter wanted Sprite but started crying when I told him we didn't have any, but we could go get some. He just couldn't handle the thought of getting up and was still throwing up at that point so I texted Uncie J. He saved the day, dropping off two bottles of Sprite and a surprise container of blueberry doughnut holes. Carter was able to stomach a couple of them later in the day and definitely appreciated the Sprite! We are so lucky to have family nearby and Uncles who would do anything for their nephew and niece! Now that I've shared about our sad and pitiful 5th birthday celebration, on to Carter's birthday interview.
This year when I told Carter I was going to do a birthday interview with him, he said, "Am I going to answer questions like, 'Why did the chicken cross the road?'" He cracks me up! He was pretty disappointed when he realized I was going to ask him real questions about himself rather than jokes. It is fun to see how he grows and changes over the years but his personality stays the same, so many of his answers are the same or at least similar. I also love that he has a few "best friends" that have remained constant over the years. Read what Carter said last year on his 4th birthday here and what he said in 2015 on his 3rd birthday here. 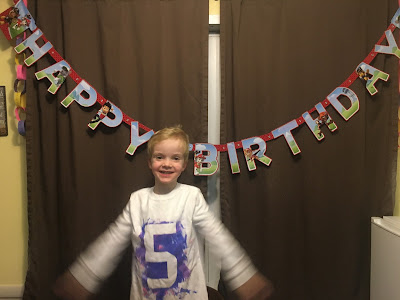 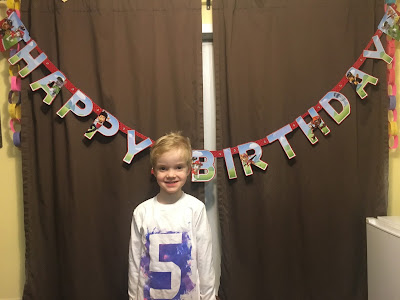 What are your nicknames?
Carter Cox and Elise calls me Carty, mommy calls me Sweet Pea.

What is your favorite color?
Orange

What is your favorite animal?
Zebra (Our zoo sold the zebras a while ago and he still talks about it and is bummed out about it, and I mean years ago!)

What is your favorite book?
A Paw Patrol book

What is your favorite TV show?
Garfield

What is your favorite movie?
Trolls

What is your favorite song?
I Wish You a Merry Christmas

What is your favorite food?
Mac and cheese

What is your favorite drink?
Lemonade

What is your favorite breakfast food?
Toast

What is your favorite snack?
Fruit snacks

What is your favorite game?
Paw Patrol is On a Roll! It's one where you can color. You can push Marshall and he jumps on fire things. (It's a game on my phone).

What is your favorite thing to play?
Hide and Seek, I like the seesaw on the playground at school. I like to play Super Hero with my friends. I play chase with Elise.

What is your favorite toy?
A yo yo (he doesn't even have one), my slinky.

Who is your best friend?
Evan, James, Jack, Landon, Grant, and Hayden

What is your favorite thing to do?
Stomp my feet?

What is your favorite thing to do outside?
Lay on the ground.

What is your favorite holiday?
Christmas

What do you like to take to bed with you at night?
Zuma and Big Al and Rubble

Where is your favorite place to go?
To JumpU (Skyzone)

What is your favorite restaurant?
The McAlister's

Where do you want to go on vacation?
To Wyatt's House

What do you want to be when you grow up?
A Daddy

Anything else you want to tell me about yourself?
What makes me move? I'm good at playing tag.
Posted by Liz Runningmomma at 7:16 PM