This year was a bunch of firsts for Carter. It was his first time to have a birthday party somewhere other than our house (not counting his first birthday which we did at a venue because I was worried we wouldn't have room in our house for everyone) and it was his first character-themed party. He started planning his birthday pretty much right after we celebrated his 4th birthday. He wanted to have PJ Masks party with a PJ Mask and Paw Patrol cake and a banana piñata. Then as his birthday neared and I started to confirm details with him so I could nail down a theme and order a cake things suddenly changed. In October he asked if he could have his party somewhere other than our house. He had never mentioned this before so I panicked a little. That makes a party so much more expensive! Then I remembered that Carter's school rents out their awesome indoor play area for parties and only charges $100 for 2 hours. Around here that is nothing, most venues are $300+, especially if you have over 8 children. I called in October to reserve a date for the party and found out they were already booked through February. Carter was heart broken when I told him and cried the whole way home. He had been so excited to have his party at the school and I knew we couldn't afford to have it anywhere else. Maybe if his birthday weren't so close to Christmas we could have swung it, but even then it would have been a lot. That's when my friend, Niki, saved the day and my parents helped us out. Niki knew of a bounce place that was $220 for up to 20 kids for 2 hours. Much cheaper than anywhere else and my parents offered to pay for the rental of the place as part of their present to Carter! I called the place, booked it, and breathed a sigh of relief.

Before the location drama was solved I told Carter we'd go to Sam's so he could pick out his birthday cake in hopes that would raise his spirits. We looked all through the book and even asked the baker about a PJ Mask cake. We were out of luck, they didn't have one! I pulled up Amazon on my phone and started looking at pricing of PJ Mask rings to use as toppers on plain cupcakes and told Carter maybe we could get a cake with PJ Mask colors and then put a few of his toys on top of the cake. Very chill he just said, "No, I'll just do a Paw Patrol party." After how he reacted to not being able to have his party at his school, I was so thankful he was willing to just change the entire theme of his party based on Sam's cake availability! He is normally very flexible and easy going which is why his sadness over the venue was such a surprise. I think he was just so excited for all of his non-school friends to get to see how cool his school is. As we drove home we talked a little more about his party and the alternative venue we had found. Carter decided he wanted to invite his entire class. Including him, that's 14 kids so not that many. Since Carter's birthday is so close to Christmas he normally doesn't have that great of a turnout at his party and I only knew one parent in his entire class so I figured not that many of them would come. I wanted to give him something about his party that was just how he'd wanted it so I agreed.

Carter invited his 13 classmates along with his friends he normally invites to his party. Counting in siblings that added up to 31 kids. We were allowed up to 20 kids but the fee for going over was $30, plus I was sure no more than 20 kids would be able to attend. As the day drew nearer and more RSVPs started to come in, I started to panic a little bit. I had ordered 24 of everything for our party favor bags thinking that would be more than enough. It turned out every friend he invited outside his class was able to come which has never, ever happened in the past. Then as his classmates' parents started responding, we were quickly up to 26 kids! Only 4 kids who were invited ended up not showing up along with a sibling who didn't end up coming. I called to let the owner know we'd have over 20 kids and she reassured me everything would be fine. I just started going over and over everything in my head. I knew there were 5 bouncers, with that many kids would it even be fun!? I got back on Amazon and ordered another batch of stuff for the treat bags which I didn't end up needing because a few of the kids left early and forgot to grab one on their way out. I wasn't too worried about having the party favors leftover because Elise says she wants to have a Paw Patrol party for her birthday so I'll just use them for her party.
For food this year we just did a few snacks to go along with the cake and cupcakes. Carter picked colorful goldfish and grapes. The goldfish went in a bowl with a scoop and the grapes were in little Solo cups with lids which Ty and I decorated with Paw Patrol stickers. For drinks we had lemonade and orange Fanta for the kids. Carter had Fanta at a friend's party and requested it at his too. For the adults we had Coke and Coke Zero and, of course, water for everyone. I found some Paw Patrol stuffed animals on sale at Wal-Mart for 4.99 so I let Carter pick 2. They were out of Chase so he picked Zuma and Rubble. Then I got a Skye for Elise. I used them as decorations on the cake table. Then all we did for decorations was a blue table cloth on the present table along with a Paw Patrol Happy Birthday sign and a red table cloth on the cake table with the stuffed animals. I put out our Paw Patrol costumes and some Paw Patrol puzzles in case any of the kids wanted a break from jumping. The puzzles didn't get used but the costumes did. Thomas painted us Chase, Zuma, and Skye with the heads cut out to use as a picture prop. He drew it out and my parents helped paint it. It turned out awesome and was a huge hit! 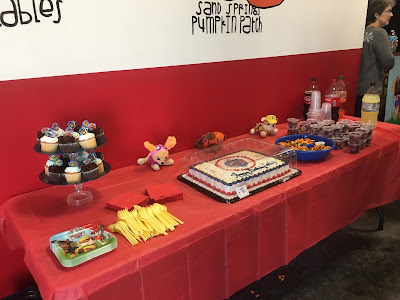 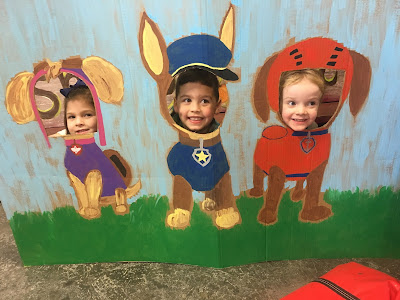 With as worried as I was about there being too many kids, it didn't seem very busy or crowded. They had a blast! Anytime I turned around Carter was walking by holding hands with a different friend. Ty said he saw Carter come out of a bouncer and get enveloped in group hugs a couple times. He definitely loved having all of his friends there and did a good job of making it around to play with all of his friends. A huge surprise for him was that his best school friend from last year, Jack, was able to come. His parents RSVPd but I forgot to write it down so Carter didn't know he was coming and was so excited! Opening presents was a little wild with so many kids but I also enjoyed getting the opportunity to manage a group of 26 kids again. It's been a few years! Carter got so many presents. I didn't even think about that when he wanted to invite his whole class, but holy presents! Presents upon presents upon presents. It worked out great that he got a variety of non-toy things like art supplies, puzzles, and even a bath towel. When Carter was done opening his presents he thanked everyone and they swarmed him for hugs to the point where he moved back so he could switch to high fives after a while. It was cute. 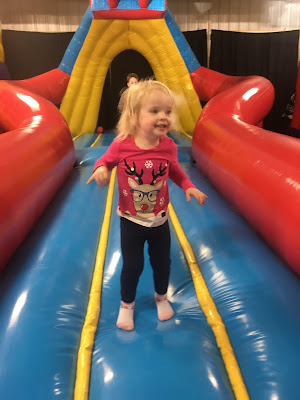 After cake and presents we had a little bit of time left for bouncing. When it was time to go the kids each got a goody bag with a paw print stamp, a Paw Patrol wristband, and a Paw Patrol mask. The masks were super popular and the kids loved putting them on. Carter had such a blast and was super excited that Hayden came back to our house to play for a little bit before his drive home. They tried out quite a few of Carter's new toys. He loves them all. A really unique one that was a huge hit was scented markers. He has colored with them every day since his party. It was so nice to just throw stuff in baskets to take home and be done with clean up. Our house always gets destroyed after parties. Toys I didn't even remember we had or know where they came from resurface. Carter's room always looks like a tornado went through it. It's just so hard to keep the kids limited to the living room and dining room when they are both small spaces. Party outside the house for the win this year! I asked Elise is she wanted to have her birthday party at Carter's school since it books so quickly and she said that she wants to have her party at home. I will definitely miss the ease of set up and clean up we had with this party! Read about Carter's penguin themed 4th birthday party here, lion themed 3rd birthday here, Go Dog Go themed 2nd birthday here, and his tie themed 1st birthday party here. 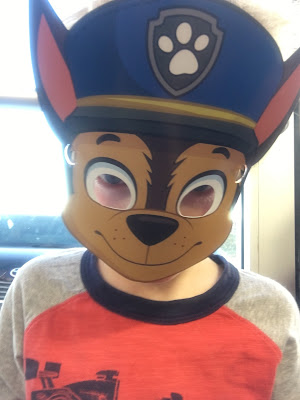 Posted by Liz Runningmomma at 12:37 PM