Christmas Eve morning we decided to take the kids to see The Star. Carter really wanted to see it and he got some Christmas money from Great Grandma and Grandpa Shupe. He used his money to buy his ticket and to get a kid's pack. Elise used hers to buy a ticket and a package of fruit snacks. The movie was really cute. Carter was so excited to tell Oma and Opa all about it when they arrived. We stopped at Tropical Smoothie and got lunch with my gift card Jeremy got me for my birthday. We made it home in time to get Elise down for a nap before Oma and Opa arrived. Carter was so excited to see them he wanted to stand outside by the curb to wait for them. The excitement of the day was getting to carry all the presents into the house and find places for them under the tree. That brought back memories of Christmas Eves past, unloading my Grandma Darlyne and Grandpa Eddie's car and delighting each time I found a package with my name listed on the sticker. After we helped them unload the car I headed out for my run. When I got home we got ready for church and headed to the 4:00 service with the kids. Carter was pretty excited that he got to hold a candle during Silent Night. At one point he leaned too far forward and the plastic cup around his candle bumped into Oma's head. At first I was worried her hair would catch on fire but then laughed when I realized the plastic cup saved her! We all got a laugh over dad sitting on his candle at some point during the service and breaking it. They had hot chocolate, hot cider, and cookies after church in the fellowship hall. The kids were really excited to get some treats. We took a family picture at the photo booth area before heading in for treats. 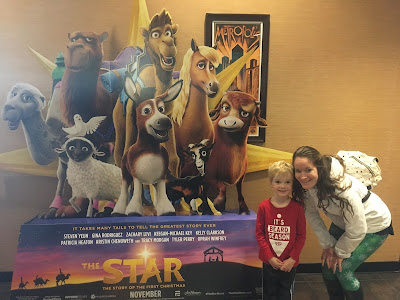 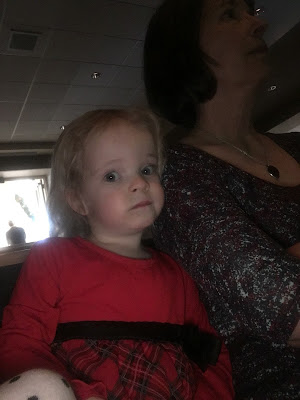 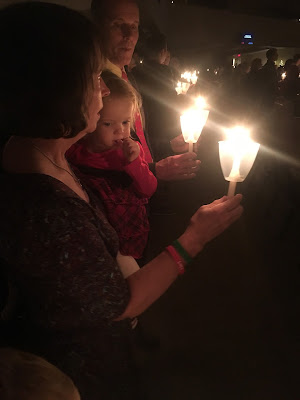 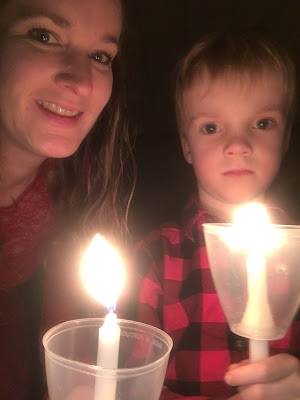 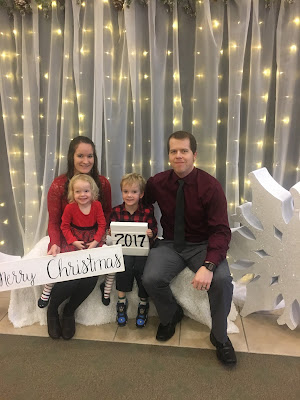 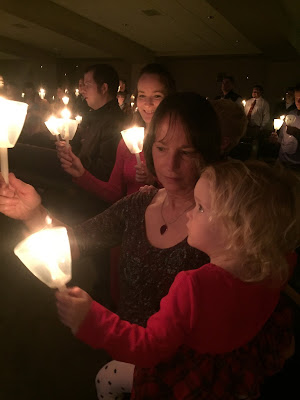 When we got home from church mom and dad got started heating up the food for dinner while the kids and I cut out sugar cookies. Ty made the dough that morning and we left it in the fridge to cool while we were at the movie. Carter picked to make sugar cookies for Santa. Since the table was set we used the kids' craft table to cut out cookies. I had moved my Christmas cookie cutters and was really disappointed I couldn't find them. We ended up using a star and heart cookie cutters which worked. Instead of making frosting we just used the leftover frosting from our gingerbread houses a friend had dropped by for us to make. We got to open presents from Aunts and Uncles before dinner. Elise wanted to sit on my lap while she opened presents and she was so excited she kept turning around and kissing me as we opened presents. That was the best gift of all. After dinner we went to Chandler Park to see the Lights on the Hill. The moment the first lights came into view Elise started clapping. She would exclaim and clap each time she saw something she really liked. Then we pulled up to a whale who was shooting a small Santa out of his spout and Elise exclaimed, "Awww, baby Santa!" Her unbridled joy was such a wonderful thing to witness throughout the holiday season. When we got back the kids put on their matching Christmas jammies and then put out cookies and egg nog for Santa because we were out of milk and hadn't gone grocery shopping yet. Oma also had to put egg nog in our breakfast casserole because she figured we'd have milk for it. It actually tasted really good with egg nog! Elise and Carter were in bed just a little after regular bedtime. The adults played a game of Trivial Pursuit before going to bed. I ended up not going to bed until about midnight and I was so excited for the morning it took me a while to fall asleep! When I snuck in to give the kids kisses they both looked so sweet with dreams of sugar plums dancing in their heads. 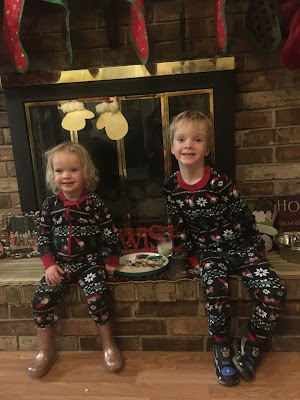 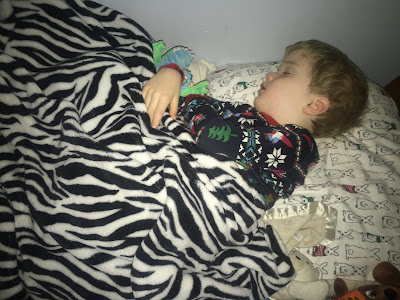 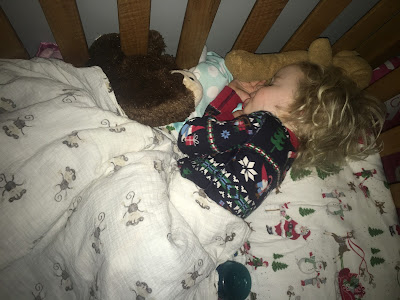 On Christmas morning I woke up at 5:30 and was so excited I had a hard time falling back to sleep. I kept waking up excited and struggling to fall back to sleep when I realized the kids were both still asleep. I was afraid I'd miss Carter waking up and running in to see what Santa brought. I woke up at 6:00, 6:30, and 7:00 and had just gone back to sleep when Carter woke up at 7:30. I heard him excitedly talking to his Oma and Opa so I ran into the kitchen to see him find his presents. Elise slept until almost 8:00. I heard her while I was brushing my teeth and when I took off down the hallway I found her running to the kitchen. The kids got a big Paw Patrol headquarters as a joint present from Santa. Carter got a toy with Chase and Marshall and Elise got a toy with Skye and Everest so they had some toys to go with it. They also got giant coloring books. Elise's was Paw Patrol and Carter's was PJ Masks. They also got Shine a Light books with a flashlight. Elise had the absolute best reactions to her presents this year. She was pulling her stuff out of her stocking and pulled out a set of watercolors where the paint was in the shape of a heart. She said, "Awww, hearts!" Then she hugged it to her chest. She also got some shoes from Santa and put them on first thing, wearing them with her jammies all day! The kids got some special tape in their stockings and Carter had so much fun taping stuff to his Paw Patrol headquarters, taping his mouth, taping the light switch, and even taping his Opa's mouth. 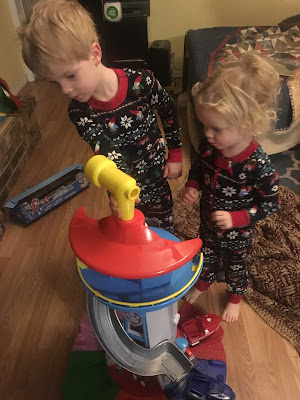 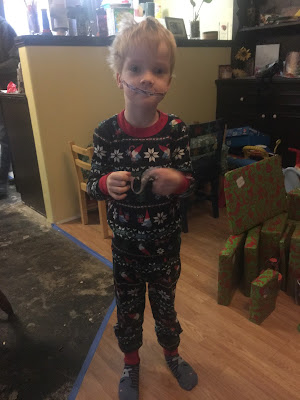 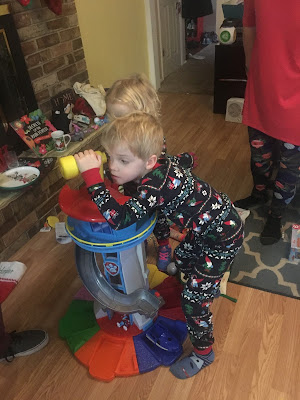 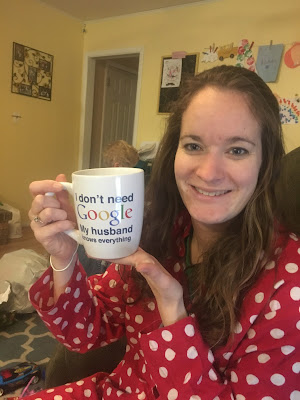 While we were waiting on Jeremy and Thomas to arrive the kids played with their Santa gifts and then we did some fun Snapchats with Christmas filters to send to family. Jeremy got to our house around 9:00. He had set an alarm so he could get over to our house early for present opening. He was excited when he found out the kids hadn't gotten up that much earlier than him and really hadn't been waiting long. While we waited on Thomas to arrive we colored in the kids' giant coloring books. Thomas had taken all the dogs to his house so we wouldn't have to mess with them trying to get into presents that had candy in them or worry about them tromping around in the presents while we were opening them. It was so nice for us but caused him to take longer to get around in the morning. We didn't mind because we had plenty of fun stuff to do while we waited and it gave the kids time to enjoy their Santa presents before opening the rest of their presents. Thomas arrived around 10:30 and we headed in to pass out presents after everyone had eaten breakfast. Carter did a great job of reading the first letter on the name tag to figure out who the present went to. 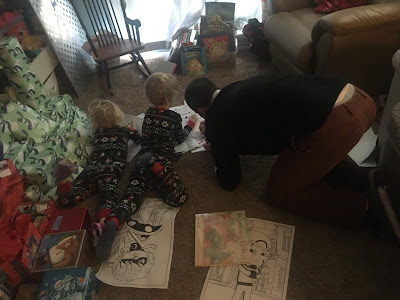 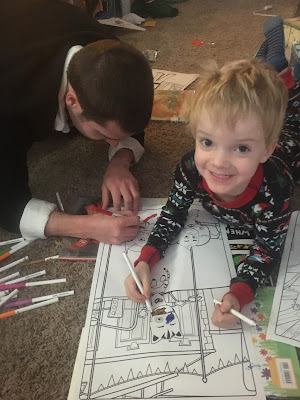 Carter and Elise opened presents first while we watched. They took turns opening so we could see what they got. Each time Carter opened a book he wanted to stop to read it before opening more presents. Elise did that a few times too. They both got clothes from Oma and Opa and there was a dollar bill stuffed in each pocket just like what my grandparents used to do for us when we were kids. Elise was hilarious opening her presents, either awing over them or screaming when she ripped open the package. One of her favorite presents was an electric toothbrush from Uncie J. She couldn't wait to brush her teeth. After the kids were finished opening their presents we opened our presents. We started with mom and then went around in a circle. We played the guessing game where you guess what is inside your package and then open it to see if you get any points. I won with 15 points. It really helps when you picked out most of your presents. Mom and dad got me clothes I picked out and Thomas kept up the tradition of buying me a large package of different flavored hot chocolates. We had such a wonderful Christmas! After naps the kids spent the rest of the day playing with their new toys. It certainly was a joyful and blessed Christmas for us! 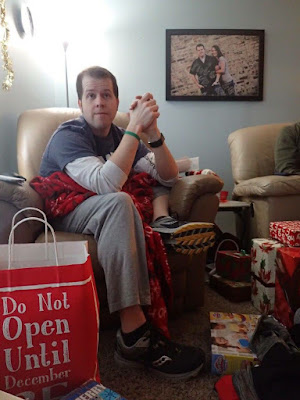 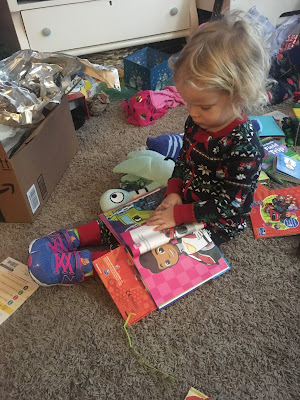 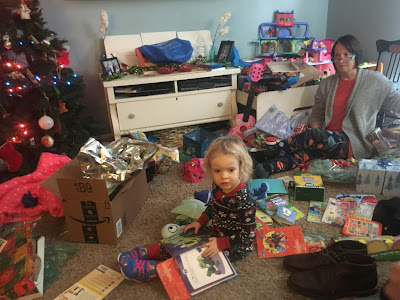 Posted by Liz Runningmomma at 2:16 PM