This summer when I did an update on Elise, Carter wanted to pose for pictures too. I took some adorable pictures of him and planned to use them for an update at 4.5 or 4.75, I forget which. I never ended up doing the update so I figured I'd go ahead and use the pictures for his 5 year old update. He has grown up since then and looks even older now than he did in the pictures. I've been amazed with how tall he's gotten recently. He's so long and lean. His legs are so thin and bony now. He's such a long way from that chubby little baby I remember so easily. At times I am blown away by how grown up he has become. Other times I look at him and force myself to remember how little he really is. He has such amazing emotional intelligence and does a great job empathizing with others that I have to remind myself he still is a little boy. For some reason 5 seems so old to me. I guess because 5 is how old he'll be when he starts kindergarten. I'm still a little in denial about him starting kindergarten in the fall. It's hard to imagine him being gone all day for 5 days of the week. I have been loving having him home all day, every day over Christmas break. I'm not quite ready to give my boy over to someone else for the majority of his day, but he is ready and thrives in a classroom setting. He really needs that interaction with kids his age. 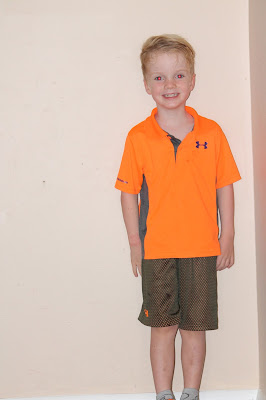 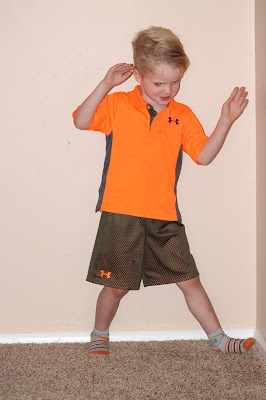 Carter is very artistic and loves to draw. When I asked him what he wanted for his birthday, the first thing he said was markers. He was so happy when he got lots of markers, art sets, and craft materials for his birthday and for Christmas. One of his favorite presents was air dry modeling clay. He was so excited to build with it! Carter noticed that Mo Willems sneaks the Pigeon into all his books, some way incorporating him into the illustrations. There for a while Carter would sneak the Pigeon into all his pictures. He still does it on occasion but not in every picture he draws like he used to. He loves to draw castles. He's recently started making dot to dot pictures for me to solve. It's pretty neat. He also likes to write stories and will ask me how to spell words so he could write the words. He'll also write mixtures of letters and ask me to read the words he has written. The other day he even wrote me a song! He also likes to list off letters for me and have me tell him what word he has spelled. He is very interested in letters and learning to read. He's very proud of his skills. He will sit down and read the pictures in books all by himself. Most days when I am putting Elise down for her nap I come out to find Carter reading a book. Other times I find him making Elise and me pictures and stuffing them into envelopes with our names on them. It's so cute when he attempts to spell Elise's name. So far he's written ESISE, ELSE, and ESLSE, he's so close! 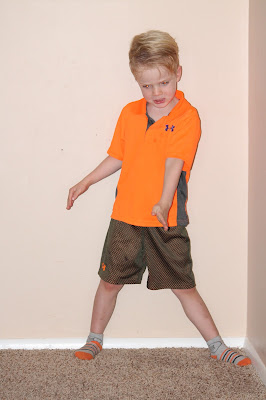 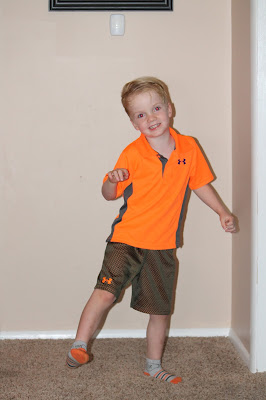 Carter still takes a nap every once in a while but for the most part has dropped them. I'd say he takes a nap maybe once a week. Some weeks he doesn't take one. I do have him lay down and rest with me for a while. I read while he rests and sometimes he reads too. When he does nap it's usually just an hour. If he naps for longer he typically has a hard time falling asleep at bedtime. He now sleeps normally in his bed with his head at the headboard rather than sideways like he was for a long time. He still sleeps with Big Al and has added in his Zuma and Rubble Paw Patrol stuffed animals as favorites. He doesn't nap at school and usually either lays and rests or goes to the music room for special centers. He still loves school and gets so excited to go. He was ready for Christmas break though and even started asking me if I could pick him up early at lunchtime for a while because he was ready for a break. We made plans for me to pick him up early on his birthday but he ended up sick that day and didn't make it to school. I love the stories he tells me about school when I pick up. Sometimes he tells me about centers, other times it's music class, most of the time he tells me about games he played with his friends on the playground. I'm so glad he likes to tell me about his day and shares so much with me. Between his information and the class Facebook page where the teacher posts pictures, I feel like I have a good idea of what goes on in the classroom. 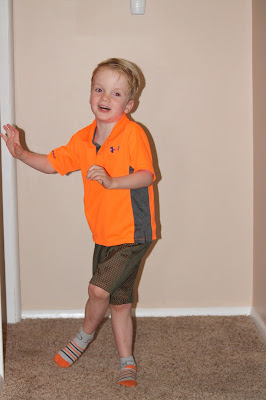 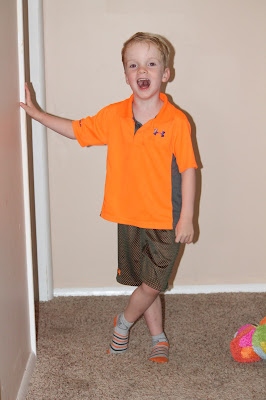 Carter's sense of direction and his familiarity with his surroundings still impresses me. We were on our way to his Gma and Gpa's house and stopped at a gas station to use the restroom. I started to turn left when we walked in but Carter headed to the right. I turned to get him and realized he was heading straight for the restroom. I asked him how he knew where the bathrooms were and he said because we'd been there before! When we stopped I felt like maybe we'd been there before but I wasn't sure. Not only did Carter recognize it, but he also remembered where the restroom was! He will also recognize streets and tell me we are close to a place he knows or asks us if we are going to a friend's house because he knows we are heading in that direction. He's also really good at coloring inside the lines in coloring books and does an amazing job using directions to build with tangrams, pattern blocks, blocks, or his drill set. I'm impressed with his visual and spatial abilities. They definitely far exceed mine from childhood! 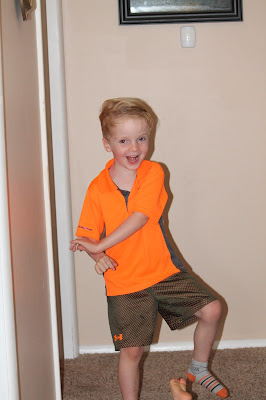 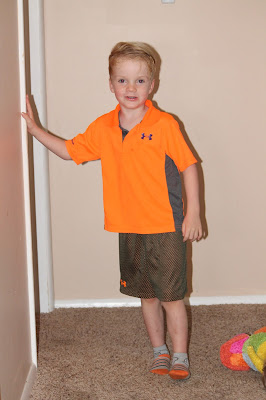 Carter's relationship with Elise has really grown and blossomed as she has gotten older. When she was first born I quickly realized life would have been easier if Carter were a little older and more able to help. But as she's gotten older I've realized their age gap is pretty perfect because they love each other so much and play together so well. Sometimes he gets too rough with her but for the most part they play really well together and sister can hold her own! Carter is the sweetest about sharing with his sister and will let her play with his brand new toys before he's even had a chance to try them out. When we went to visit Santa and he asked Carter what he wanted for Christmas, Carter just told him all about what his sister wanted. Carter also shares really well with others. He had some candy and when his Uncie Taco was joking that he was going to eat it all, Carter told him, "You can have as much as you want." Although he is mostly sweet, he also has his ornery side. He likes to whisper to Elise to do things he knows she shouldn't and then laughs when she gets in trouble. He also thinks it's funny to feed her false information. Elise was really excited about her Gma and Gpa coming to visit. They were coming on Saturday and on Thursday Carter told Elise her Gma and Gpa were coming that day. He knew they really weren't but thought it was funny to get her all excited. We tried out a church that has a special children's church during the church service. Carter and Elise wanted to go to the same classroom but they were separated by age. That didn't go over very well because they wanted to be together. Neither of them ended up going to children's church, maybe next time! They play together a lot. When we go to a playground or play area they tend to mostly play together. Even when they make other friends their own age, which they both typically do, they get their new friends to include their sibling in the game too. Often times with Carter that means he and a friend chase Elise around or run from her or sneak up on her and try to scare her. Her favorite is when he can sneak up behind her and scare her when she's carrying something so she throws it when she jumps. 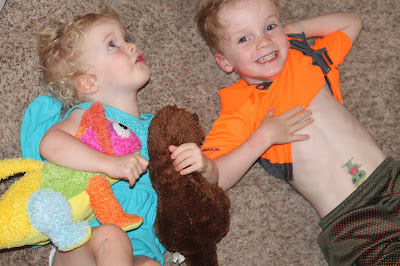 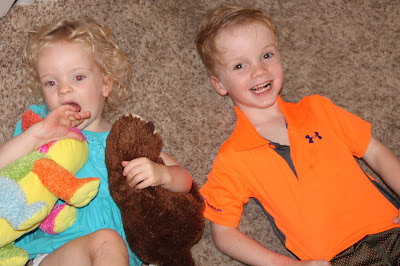 Carter loves to wear his slippers and tried to wear them out of the house multiple times. Surprisingly, he didn't even try to wear them to school on pajama day! He loves the Trolls Soundtrack and asks to listen to it while we pick up the house in the evenings. He likes to watch Paw Patrol and PJ Masks. He also likes to watch a show with superhero characters called Cat Noir and Ladybug. He plays as Cat Noir and runs around landing like a cat. Elise is Ladybug. He picked up playing zombies at the playground and will follow Elise around moaning with his arms hanging in front of him. Most the time she runs and is scared. Sometimes she'll stop and hiss in his face. He got a PJ Masks headquarters from Oma and Opa for his birthday and loves to play with it. He also got a Paw Patrol headquarters for Christmas and plays with it quite a bit too. He got so many presents that he loves! He's been pretty busy at home playing with all his new toys. 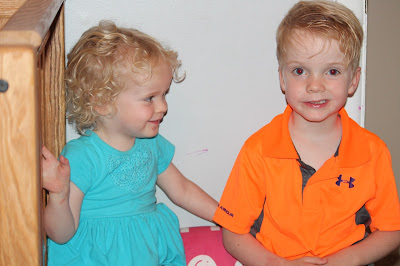 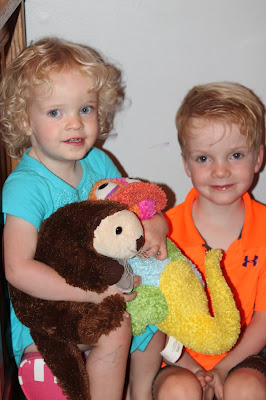 Carter is the sweetest little boy and is still a bit of a momma's boy. He reacts the best to my style of discipline. He is easier to soothe when you talk quietly and calmly with him than when you get firm and raise your voice. He is very sensitive and hates it when he disappoints anyone, especially me. He is soft hearted and will cry when he knows he did something wrong. He can also be pretty darn stubborn and the easiest thing to do is just walk away so you don't get pulled into a power struggle. For the most part he is all sweetness and smiles. It's easy to tell when he's overtired or hungry because that's when he starts acting out. I love him so much and am so glad he still wants me to pick him up and carry him when I pick him up from school. There's nothing I love more than kissing his sweet cheeks and having his bony bottom resting in my lap while we read books. It's amazing to me when I realize he was born 5 years ago. It was the best day of my life at that point and started the magical journey of motherhood. While there are difficult days and hard times, each day provides such an abundance of love and happiness, it's hard to imagine how I was ever happy without such a sweet and special boy in my life. I love Carter so much! Happy 5th Birthday to my first born!
Posted by Liz Runningmomma at 2:22 PM