Christmas: What the Kids Say and Our Santa Visit

We went to visit Santa at Bass Pro this morning. I gave the kids a run down of all our choices of things to do for the day. Carter immediately latched onto visiting Santa and was desperate to go. Elise didn't want to go and I couldn't even convince her to get dressed. Carter tried all kinds of coaxing and bribery and Elise was still an unwilling participant. Carter quizzed her on what she wanted from Santa and told her he'd tell Santa for her. We got there much later than we ever have in the past and it turned out to be great timing because we hardly even waited in line. When it was our turn I carried Elise up to Santa and let her observe while Carter chatted with him and sat on his lap. We were lucky because there was no one in line behind us so we weren't rushed. Then I plopped Elise on his lap and ran out of the picture. She immediately started crying but they were able to get the picture off quickly and I ran back over to pick her up before she'd even had a chance to really rev up her crying. The minute I had her again she stopped crying and listened as Santa asked Carter what he wanted for Christmas. Instead of telling Santa what he wanted, he informed Santa that his little sister would like an electric toothbrush like the one he got for his birthday. Then when Santa prodded him on what he'd like for himself, he finally said he'd like Santa to find Little Sally and bring her back. Poor Santa has a lot to live up to after miraculously finding Big Al and depositing him in Carter's stocking last year! When they handed us our free picture after visiting Santa, we also got coupons for free kids meals at the restaurant inside the store. Since it was already 12:30 by the time we left Santa's Workshop, we decided to eat there. It was such a fun morning! As we were leaving a woman asked Elise is she had gotten her picture taken with Santa and Elise responded with, "Yeah, I cried. I want sit in my Gpa's lap, not Santa's lap!" I thought that was pretty cute. To go along with our amazing Santa picture from this year, I'm adding the kids' answers to the same Christmas-related questions I asked Carter last year plus a couple new ones I added this year. Read what Carter said in his Christmas interview last year here. 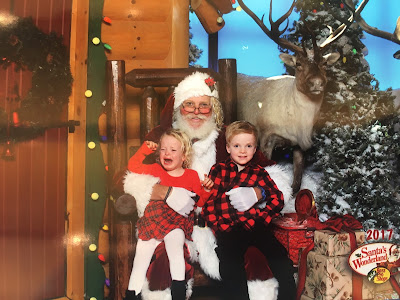 What's on your Christmas list?
Carter: Markers, remote control car, clay, color tablets, a Chase stuffed animal, and for Santa to find Little Sally.
Elise: bath bubbles, an electric toothbrush like Carty (he got one for his birthday), Pawtol (Paw Patrol)

What is the best part about Christmas?
Carter: Seeing Oma and Opa.
Elise: Kitty cat

Why do we celebrate Christmas?
Carter: It's Cheesus' birthday.
Elise: Kitty cat

Where does Santa live?
Carter: In the North Pole!
Elise: In da house.

What are the names of Santa's reindeer?
Carter: I don't know. I just know Rudolph.
Elise: Blue, geen

What do you think Santa's favorite food is?
Carter: Cookies!
Elise: Fruit

What will Santa bring mommy and daddy for Christmas?
Carter: A toothbrush
Elise: Goldfish

What's your favorite thing about Marco (their Elf on the Shelf)?
Carter: Him going into my box.
Elise: The Christmas tree.

Now for a flashback at all of our past Santa visits:
I think next year will be our year! I'll be crossing my fingers for both kids to be in the picture and for neither of them to be crying!
Posted by Liz Runningmomma at 4:42 PM