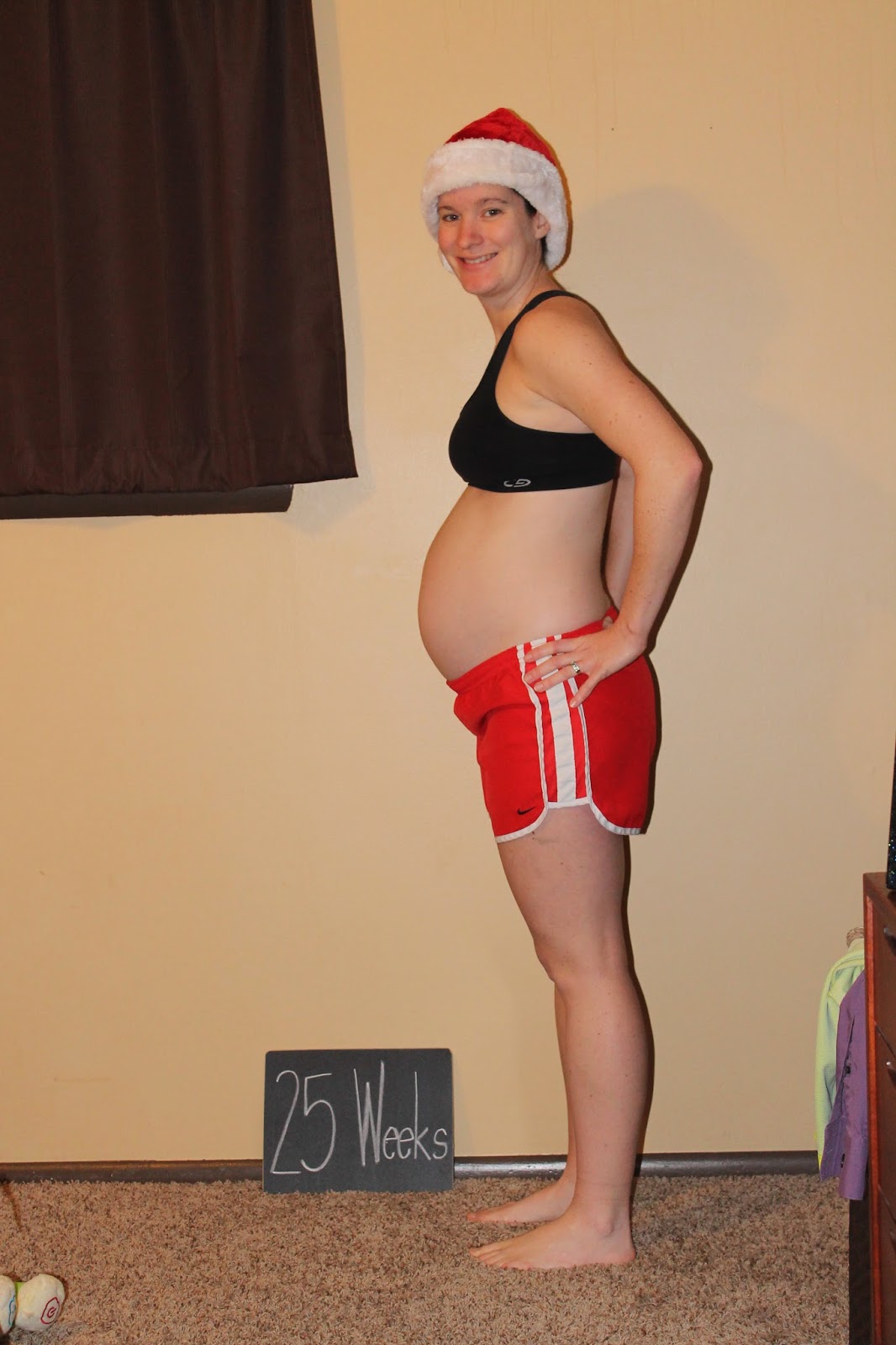 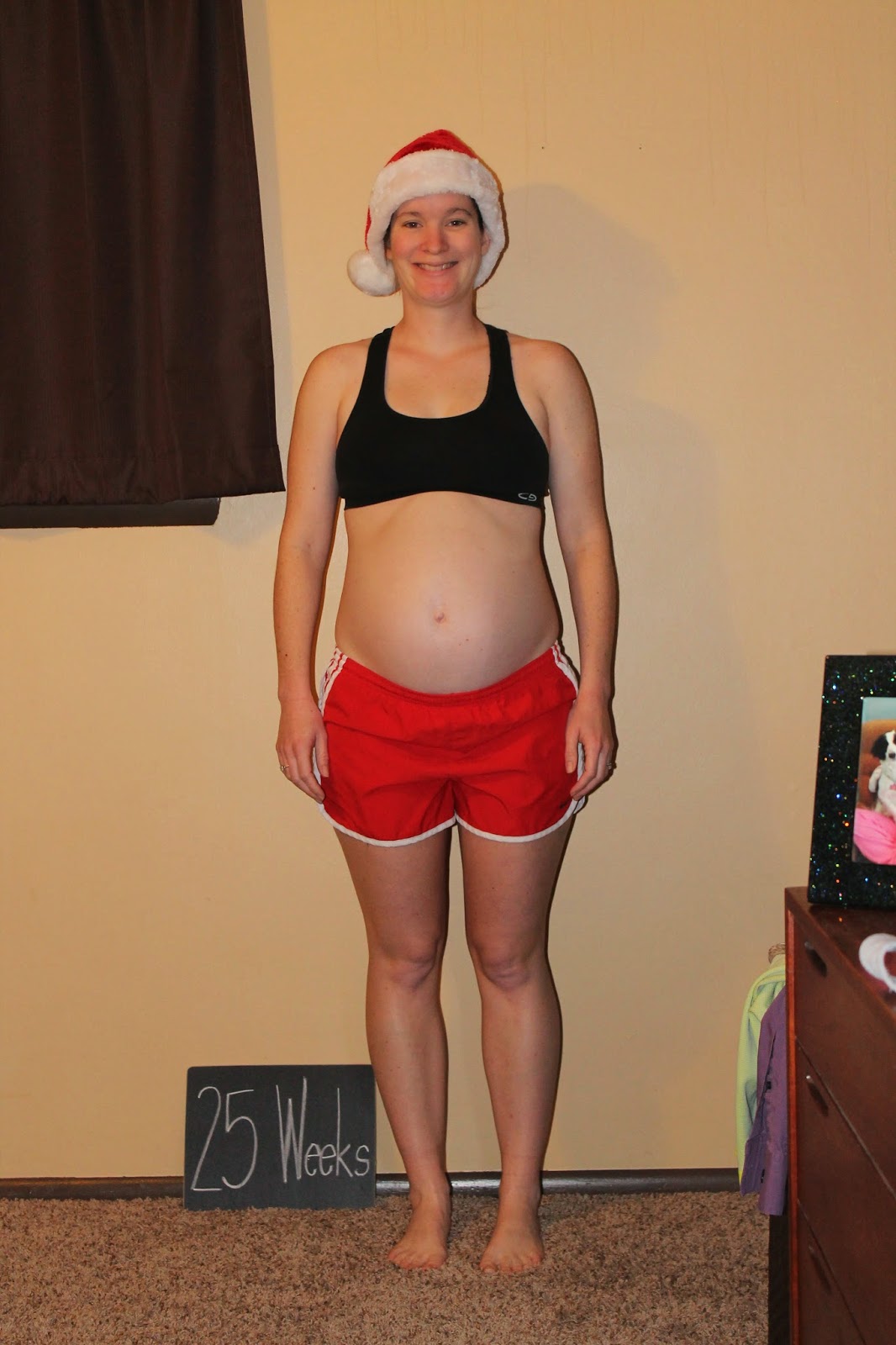 Baby's Size: Baby is around 13.5 inches long and weighs about a pound and a half.  If she were born this week she'd have a 50% chance of survival!  She is beginning to plump up and look more like a newborn.

Weight Gain: I was up 15 pounds this morning.  It fluctuates so much from day to day and I swear it depends on what I eat.

Maternity Clothes: The non-maternity tops I've been wearing are starting to get a little bit short to where if I'm not paying attention they ride up and expose my tank top.  I'll probably keep wearing them for a while so I'll have more of a variety of long sleeved shirts.

Sleep: This week I didn't have as many nightly restroom breaks, but Carter was struggling and woke up almost every night around 2:30 am just screaming.  My big problem is that I can't fall asleep.  I lay in bed for 1-2 hours tossing and turning.  So when Carter wakes up I usually lay there for an hour even though he's back to sleep.  I think part of it may have had to do with Carter's birthday party and Christmas and everything I needed to do to prepare so my brain just wouldn't shut off.  I'm hoping I'll go back to falling asleep normally next week.  Despite my lack of nighttime sleep, I haven't felt quite as tired this week and didn't take naps when Carter was napping so I get could more done.

Symptoms: I just don't feel that big even though I know I'm starting to look big.  People will make comments and it brings me back to reality.  A mom in my stay at home mom group asked me when I was every going to start looking pregnant because I was so tiny, but then when I relayed the conversation to my brother his eyes grew wide and he laughed.  On Sunday my dad, without even thinking, blurted out "You were this big with Carter?!!!?"  So I guess I am looking pretty big!  Then when I showed up for a playdate the older brother of Carter's friend looked at me and immediately asked if I was pregnant.  So although I don't feel too large, I must be looking it!  I do have trouble bending over and getting up when I'm sitting on the floor.  I huff and puff and get out of breath when I sweep, vacuum, or move furniture.  Ty's finally getting to the point where he doesn't want me to move furniture or lift stuff which is nice when he's home, but when he's not I just do it anyway because stuff has to get done!  My tailbone gets sore, especially when I sit on the floor.  After I've been on the floor when I stand up it is really painful!  I had my first Braxton Hicks contractions this week.  They felt just like the ones I had with Carter.  They tend to happen most often when I hold my bladder for too long.  Then when I finally go, I feel the contractions!

Running: My weekly mileage was 15 miles.  Last week was an amazing week as far as running went.  I was running fast and feeling great.  This week has been a mixture.  I've had a few days where I just felt rough and only ran 2 miles because my legs were burning, my hips were sore, and I was struggling.  Then I've also had a couple days where I felt really great and ran a lot faster than I thought I was.  I remember it was around now that I started feeling really good on runs and contemplated doing a half-marathon when I was pregnant with Carter.  That's definitely not something I plan to do this late in pregnancy again!

Food Cravings: All the Christmas goodies have been killing me!  My mom brought fudge last weekend when they came for Carter's party and I can't walk by the stuff or I cut off a chunk and eat it!  I'm not craving anything though, I'm just eating stuff because it's there!

Food Aversions: The smell of smoked meat still gets me, but I've been able to eat barbeque sauce.  My family wanted to go out to eat on Sunday and I suggested Rib Crib because I wanted to see how barbeque sat with me.  I had a pulled pork sandwich and was able to eat it just fine.  It didn't have a smoked taste to it.  I think if I had smoked meat with a really smoky flavor that would be a whole other story.

Movement: Little miss is definitely still moving around quite a bit.  She had a few kicks this week that were a little bit painful for me.  Last night in bed she was really giving it to me.  She also likes to press her body up against my stomach to where I can see and feel a bulge.  I love it!

Best Moment of the Week: Carter's birthday party was a blast and it was so much fun to watch him play with his friends.  It was also super exciting to pick up Ty's brother, Paul, and sister-in-law, Amanda, at the airport.  Carter had his 2 year check-up today and our doctor said he would accept Elise as a new patient and got really excited, congratulating us.  I can't believe it's getting so close!  We only have the months of January, February, and March and then she'll be here at the beginning of April.  I'm getting to the point where I get giddy when I think about April.  Before it seemed so far off I didn't get that excited!

Currently Loving: Getting things ready for Elise's arrival!  It's so nice this being our 2nd because we have way less to do to prepare for her arrival.  We already have a doctor picked out and know she will be accepted as a patient.  We also have all the major necessities such as a crib, changing area, pack n play, and fun stuff like activity gym and jumperoo.  Now that Carter's sleeping in his big boy bed I've moved most of his stuff over from the nursery.  His clothes are now in the dresser in his room so I've washed, folded, and put Elise's newborn and 0-3 month clothes in her dresser.  I've left a few bins of toys in the nursery figuring Carter may want to play in Elise's room while we're in there getting her dressed and such.  For a while I've been pondering how we could turn this wasted space by our kitchen into a playroom.  We had our futon in the middle of the room and then had a bookshelf and a desk in there, but the room just wasn't functional and we never used it.  I mentioned it to Ty and he immediately jumped on board talking about moving things around and getting rid of furniture.  We donated the bookshelf and listed the desk on Craig's list, moved the futon against a wall, and will probably get rid of the other large piece of furniture in the room.  Last night we bought a square cubby storage set from Big Lots with Christmas money from my grandparents and I'm working on organizing all the stuff we took out of the desk into the cubbies.  We'd like to add a rug on the laminate floor so I could put Elise on the floor on a blanket or her activity gym while Carter plays.  We also have a rocking chair in the room so I could nurse and/or rock Elise while Carter plays.  I love picturing all the possibilities!  Carter is already loving the room because he can drive his cars across the floor so easily!

What Big Brother is Up to This Week:  Carter had his 2nd birthday party and had a blast!  He was so excited to see his Uncie Paul and Auntie Mandy (the way he says it is sooo cute).  He accidentally called Paul, Auntie Paul a few times so he switched to just calling him "Pau".  One of the cutest things he's started doing is calling his Uncie Thomas, Uncie Taco.  Last week he kept trying to say Thomas and just gave up and decided to call him Taco.  It stuck and I love it!  It makes me think of the hilarious uncle from the show, The League.  We visited Santa twice this week.  First we went on Thursday, but the Santa was odd and Carter looked miserable in the picture.  So then we went to a different Santa who was great and got Carter to smile.  It was fun to think of Elise being in the picture with Santa next year.  I'm loving how real this is getting and picturing how life will change with another baby in it!  I know it will be different and stressful, but I'm so excited!  My Week 25 Bumpdate with Carter. 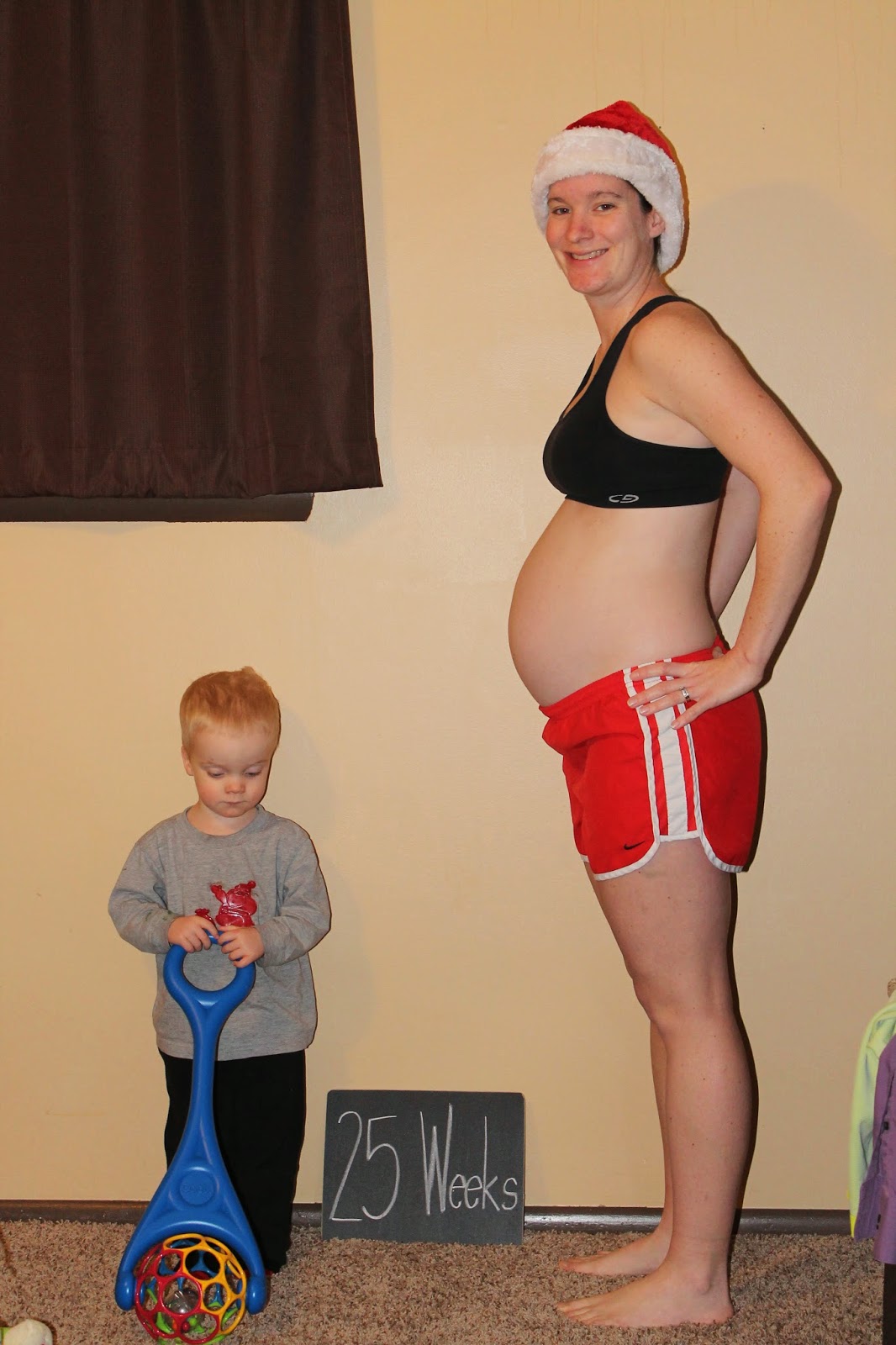 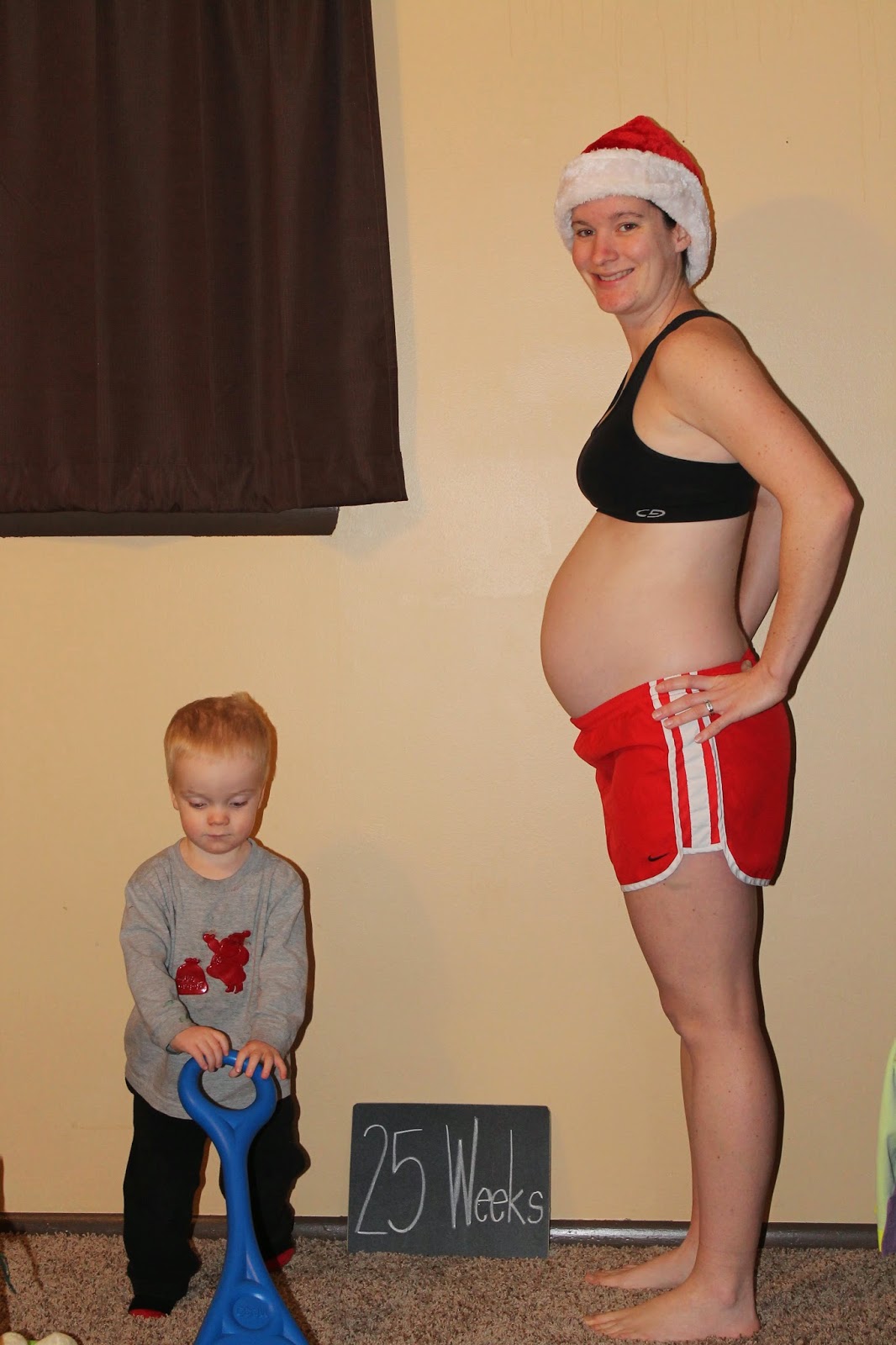 Posted by Liz Runningmomma at 9:44 PM