We did the pictures in the evening this week again but were able to fit them in before dinner.  At this point I don't think it makes too much of a difference, at least not like it did before when I woke up looking normal and ended the day looking pregnant! 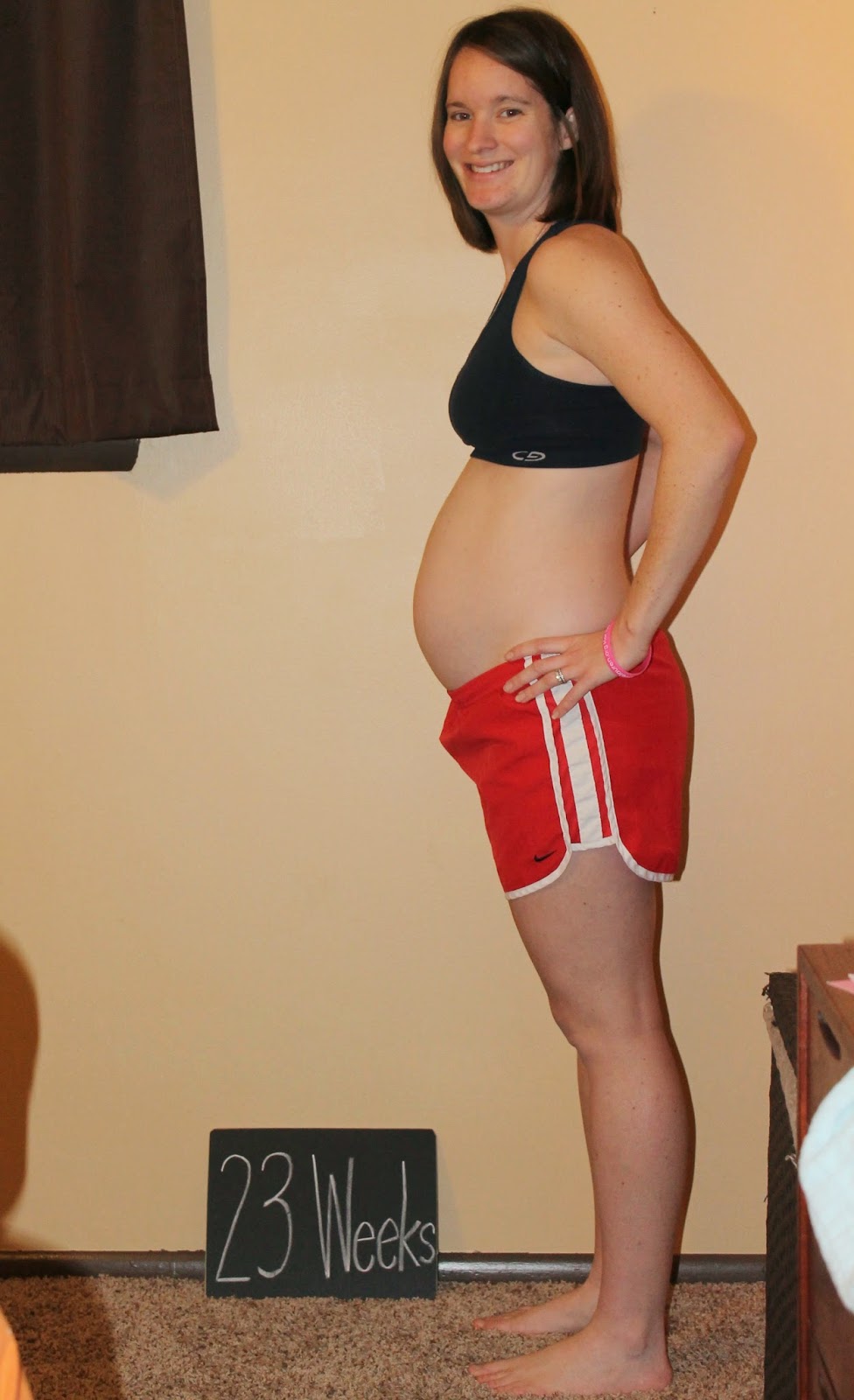 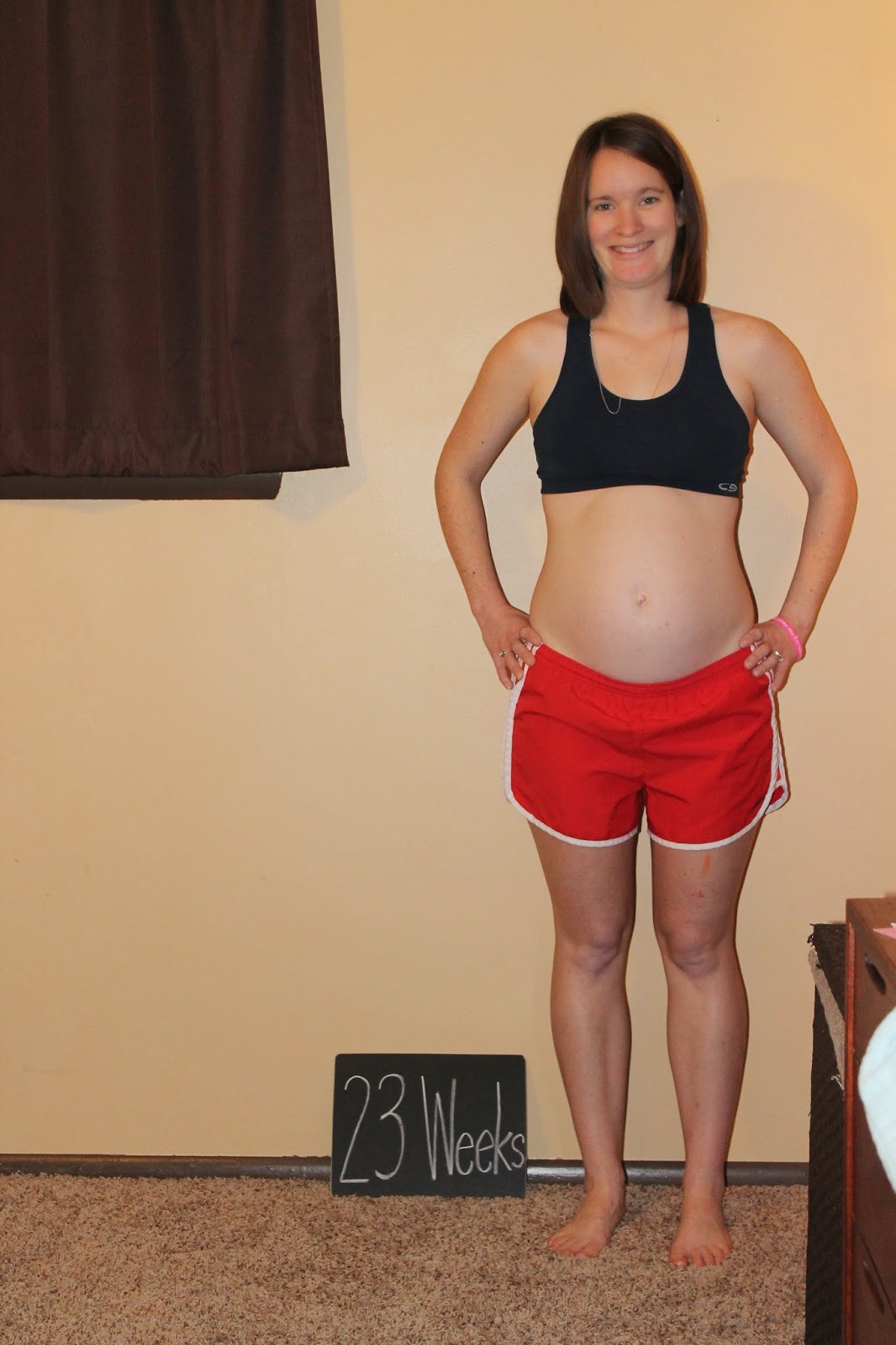 Baby's Size: Baby is the size of a mango, more than 11 inches long and weighing over a pound!  Blood vessels in her lungs are developing to prepare for breathing.

Weight Gain: Still just up 10 pounds, thankfully!  That was a huge relief.  When I was pregnant with Carter I always just felt pregnant.  Even toward the end when I either swelled or picked up weight in my face and legs, I didn't feel fat.  I didn't even realize my face and legs were bigger.  This time I feel fat.  I haven't gained more weight than last time and I look mostly the same.  I'm not sure if it's because it's the holidays or if it's because my belly is shaped differently.  Ty is very sweet about reassuring me about my weight and that I'm not fat and it's all in my belly.  I love what a great support he is during the process of pregnancy.

Maternity Clothes: Still sticking with maternity pants and wearing a mixture of maternity and non-maternity tops.  The non-maternity tops that fit are dwindling and I've moved up to medium t-shirts rather than smalls.  I registered for medium shirts at a few races when I was pregnant with Carter and after he was born.  It is so nice to have them now.  I squeezed into smalls until I could switch over to wearing Ty's large shirts when I was pregnant with Carter.  It was a sorry sight!

Sleep: I had a few nights where I slept until 5:30 before waking to use the restroom and then other nights where I was up 3 or 4 times.  We went to visit Ty's family this weekend and I forgot to pack my body pillow.  I had a hard time falling asleep without it so Ty got me 2 extra pillows, one for between my legs and one for under my belly.  It wasn't as comfortable as my body pillow but it worked.

Symptoms: I've started to waddle a bit here and there.  If I sit for too long, like on our 4 hour car drive or sometimes after I run I waddle a little bit afterward.  If I'm consciously thinking about it, I can fix it.  My hair seems to be growing slower as I don't have to shave as often.  I normally shave every day.  I shave from my ankle to my knee one day and then the rest of the way up the next day.  I've found I'll go to shave and don't need to.  I'm not the type of person who stops shaving as often when it gets cold and I switch to long pants.  It totally grosses me out to have long hair on my legs, so it really is just that my hair isn't growing as quickly!  The top half of my belly button has started to pop out.  It did the same with Carter and never popped out all the way, but I think it's going to pop out all the way this time.  Sometimes I have trouble breathing.  It feels like everything is up high.  In the car on Sunday I kept waking up because I couldn't breathe.  Sleeping while sitting up just puts too much pressure on my lungs as my stomach pushes up toward them.  I've also had some soreness in my lower lower back/upper bottom.

Running: My weekly mileage was 15 miles.  Still feeling strong and my stride feels normal and comfortable.  I've been surprised with the times I can run without the stroller.  Running is going so much better this time than it did with Carter!  I think a lot of it has to do with everything already being stretched out from before.  With Carter my hips were so sore on runs, but they feel great this time around.  One day on a run Harper stopped to potty without warning, pulling the stroller back and slamming it into my belly.  It really hurt and boy was I mad!

Food Cravings: Nothing that I can think of.

Movement: Little Miss has been moving so much more frequently lately.  Before I typically just felt her a couple times a day.  Now she's moving pretty much anytime I sit or lay down.  Her movements are a lot stronger now too.  Ty felt Baby Girl move a few weeks back but he felt a really big kick that he instantly knew was a movement this week.  Before he felt her but wasn't sure if he really had and asked me if she'd just moved.  I can feel her up a lot higher, closer to my belly button.  Before she was always pretty low.  When we were visiting Ty's parents Leina got to feel baby move.  It's so much fun to be able to share all the movements I've been feeling with those who love Elise.

Best Moment of the Week: Carter and I went to storytime at the aquarium.  We sat in front of the shark tank and it was the coolest!  Carter grabbed a shark stuffed animal and snuggled up with it.  It melted my heart.  He looked like such a baby sitting there with his tiny hands squeezing into the fabric.  I pictured a tiny baby cuddled up against me in a baby carrier and the scene seemed even more perfect.

Currently Loving: The increase in movement I get to feel.  Baby Girl is constantly on the go right now!  I also love that the movements are so much stronger I can see them.  One day I saw a movement out of the corner of my eye.  She also pushes up against my stomach and I can put my hand on my stomach and feel her.  It reminds me of how Carter would stick his little booty out and there would be a lump on the top left of my stomach.

Miss Anything: I've yearned for sushi a couple times this week, but nothing too serious!

What Big Brother is Up to This Week: Carter man switched over to his big boy bed this week.  He did amazingly for his first nap, first bedtime, and second nap.  That second night he wouldn't go to sleep unless I laid with him until he fell asleep.  I decided since it's a big transition I'd just lay with him and slowly transition away from it if he didn't naturally do it on his own.  He gets so excited about his big boy bed he talks and giggles and squeals.  He'll even start saying "ni ni" around dinner time and then run and climb into bed on his own at bedtime.  I love going in when he wakes up and laying in bed with him talking for a little while.  He'll talk about everyone who went night night while he was sleeping.  It's the cutest.  My Week 23 Bumpdate with Carter. 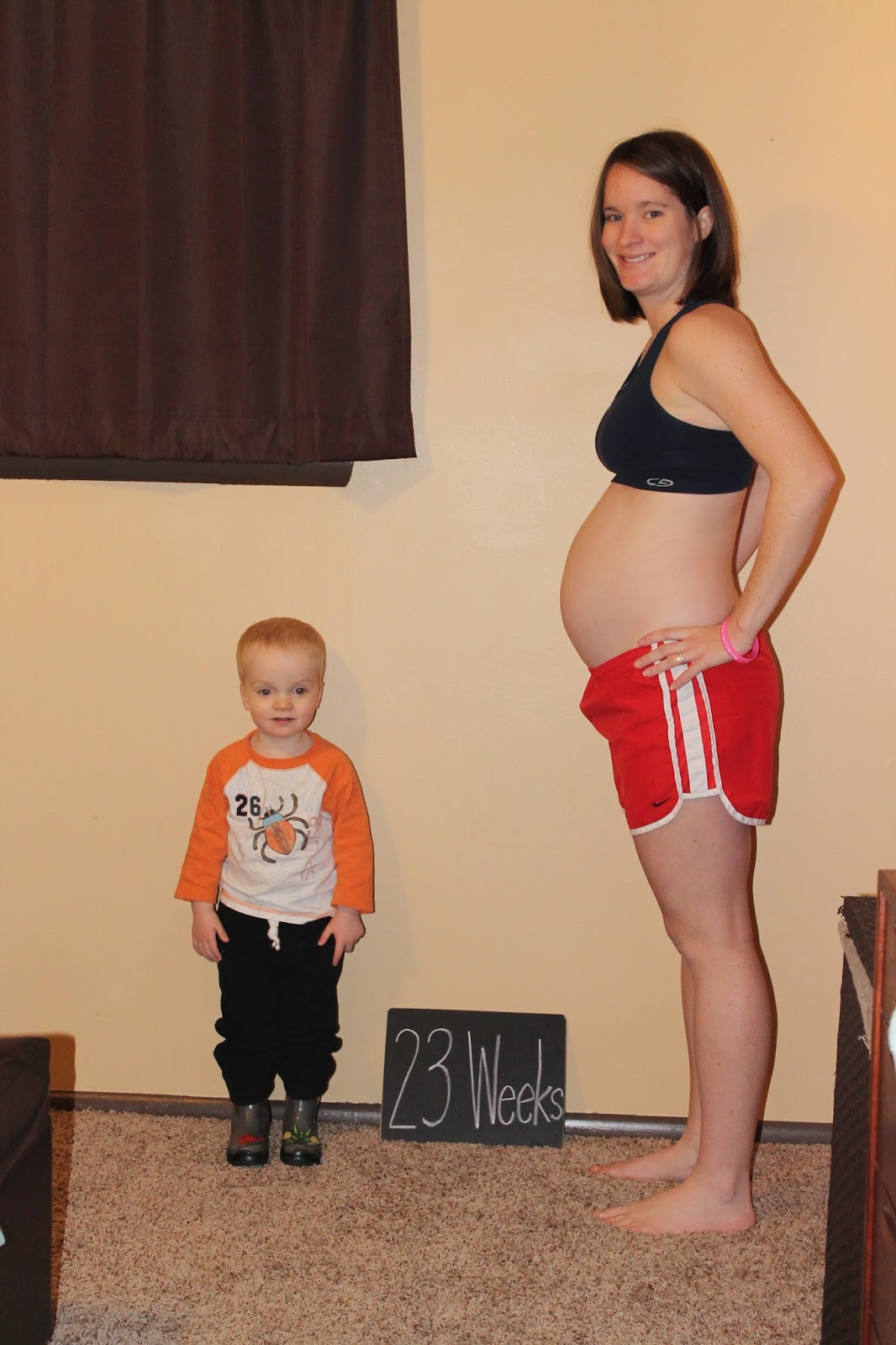 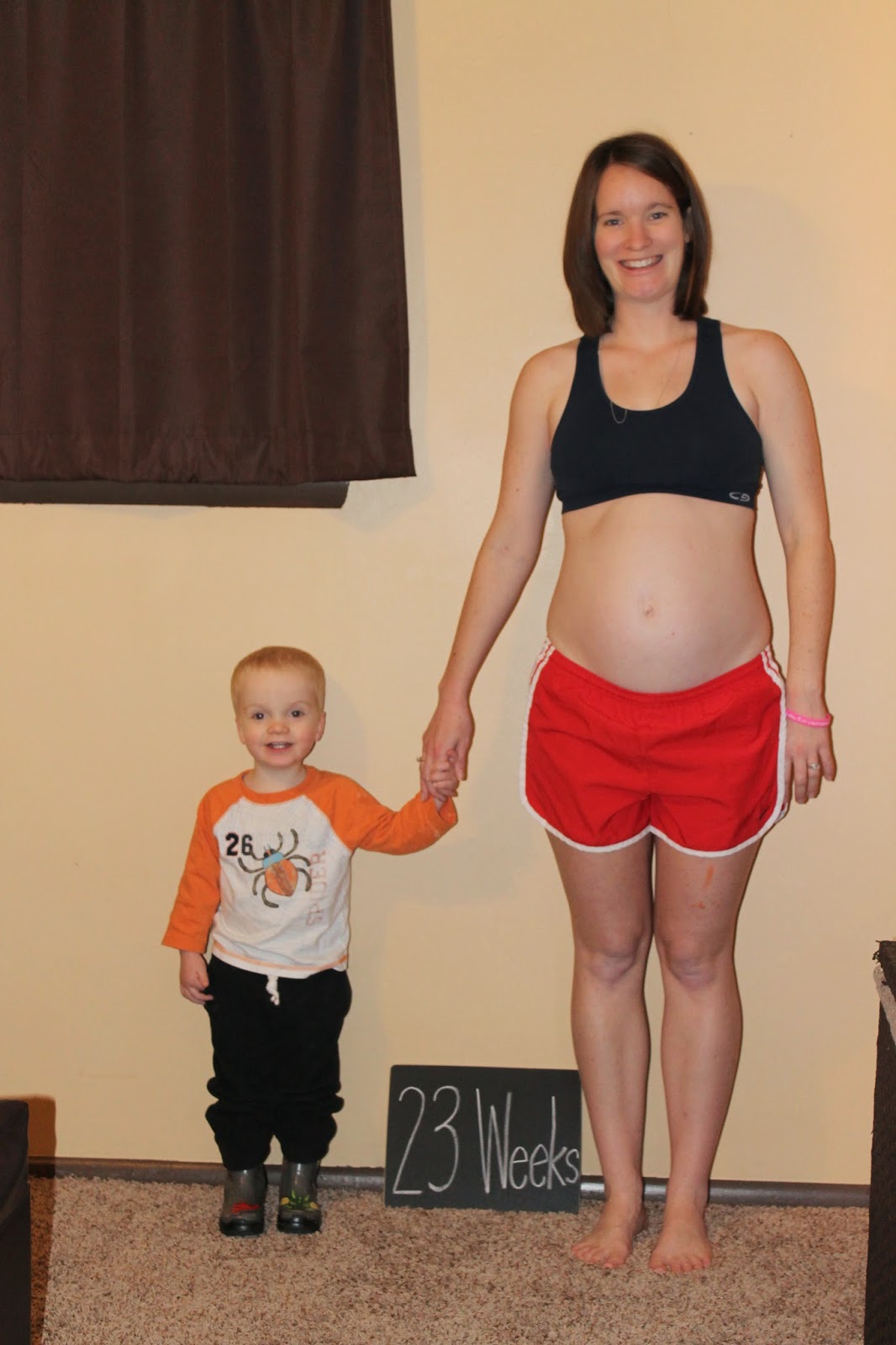