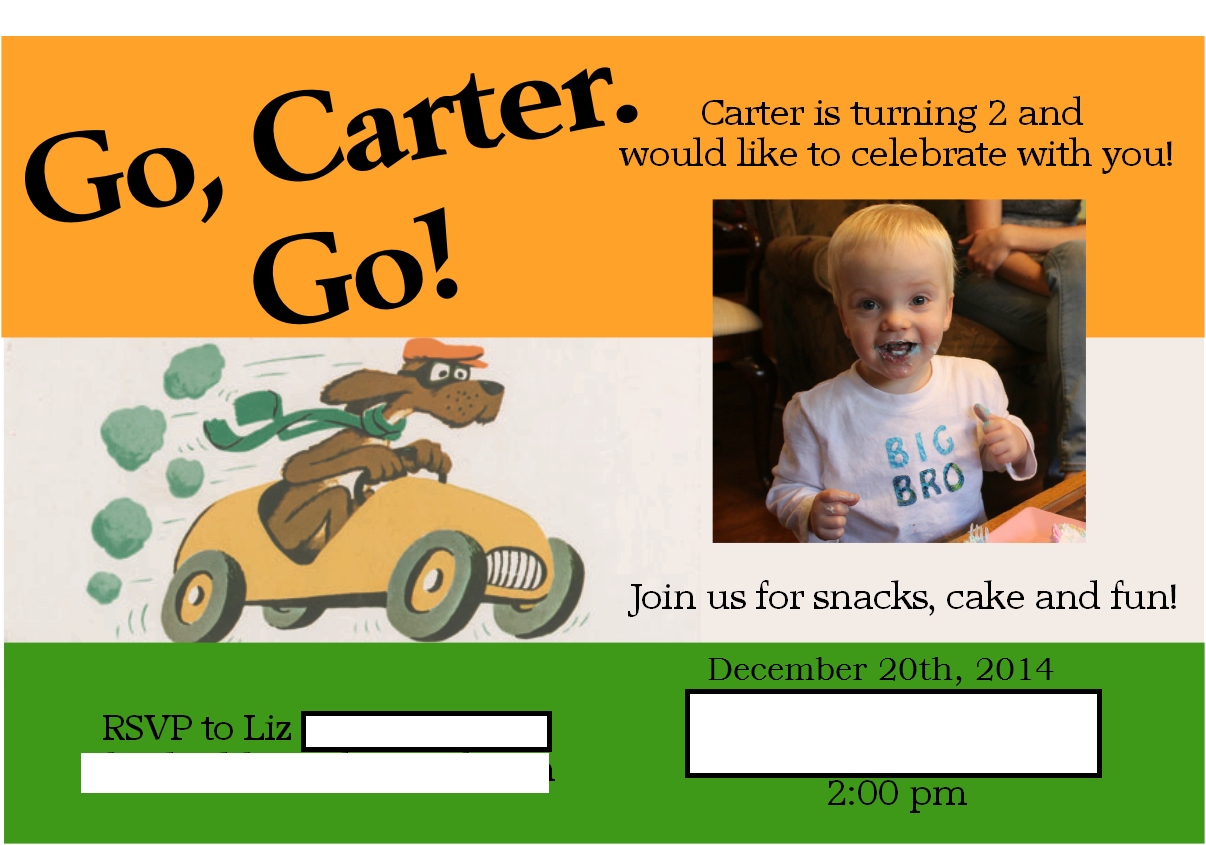 When planning Carter's 2nd birthday party I started thinking about his favorite things in hopes of coming up with a theme.  At the time his favorite book was Go, Dog, Go and it's still one of his favorites.  It's a great combination of things he loves: cars, dogs, and all forms of transportation.  I loved the idea for the theme and knew it would make for easy party planning as I could focus mostly on cars.  I immediately knew I wanted to make a road on the ground using black and yellow electrical tape and set cars out so Carter and his friends could drive their cars on the road.  Carter had loved the masking tape train track I made on the floor during train week so I just knew the road would be a hit.  Ty was a little hesitant of using electrical tape on the carpet, but he ended up agreeing to let me do it. 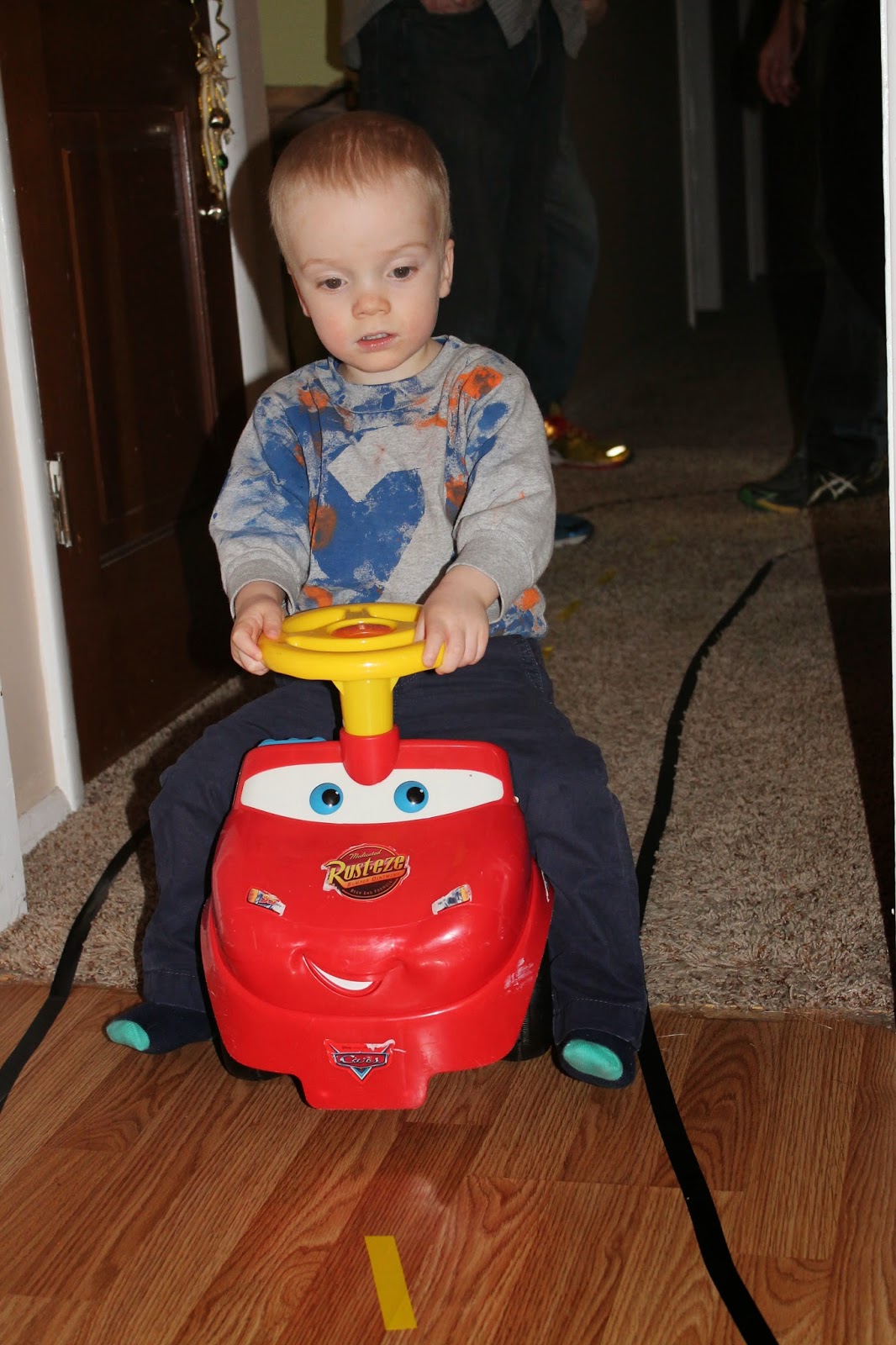 I planned to use Carter's train table set up with all of his smaller cars and his new train set as a play area for kids.  Then my mom brought a Cars mat with a road on it, so I set that out on the floor along with some of Carter's bigger toy cars.  One of Carter's friends has older siblings who were possibly coming for the party so I set up a craft area in the other room complete with a kid table covered in paper for drawing.  I came up with 2 different cars that could be made out of materials I pulled out of our recycling bin.  One car was made out of a toilet paper roll and the other was made out of a water bottle.  My teacher side came out and I couldn't help myself, I created how-to guides for making the cars complete with pictures to help kids make the cars.  I pulled Carter's favorite car books and put them in a basket for people to read.  I figured Carter would be the only one to read a book during the party, but I thought it was cute.  Inside our entryway I set out toy car favors with a thank you tag for the children guests and we hung a "happy birthday" sign I made over the living room doorway that was visible from our front door. 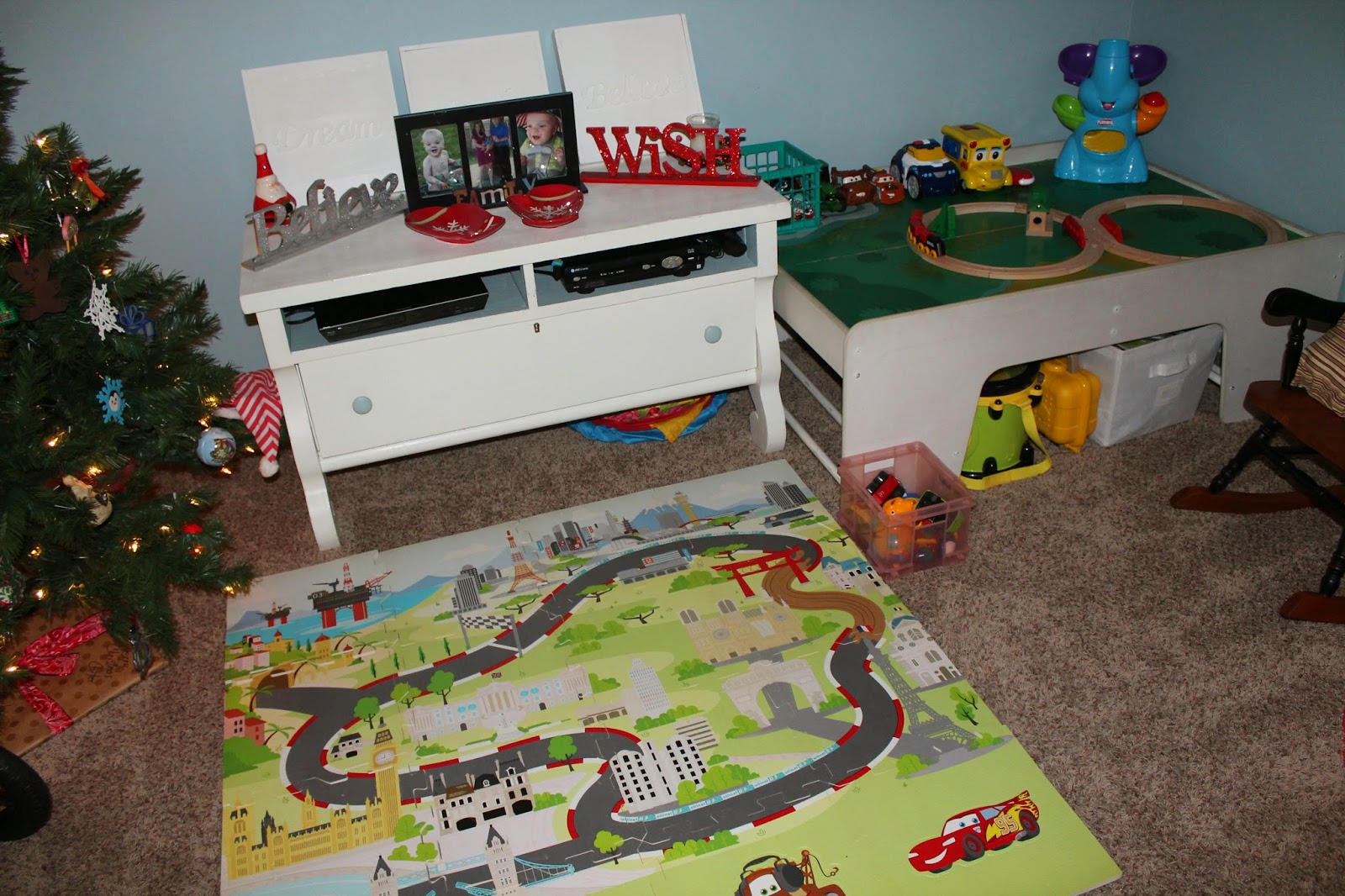 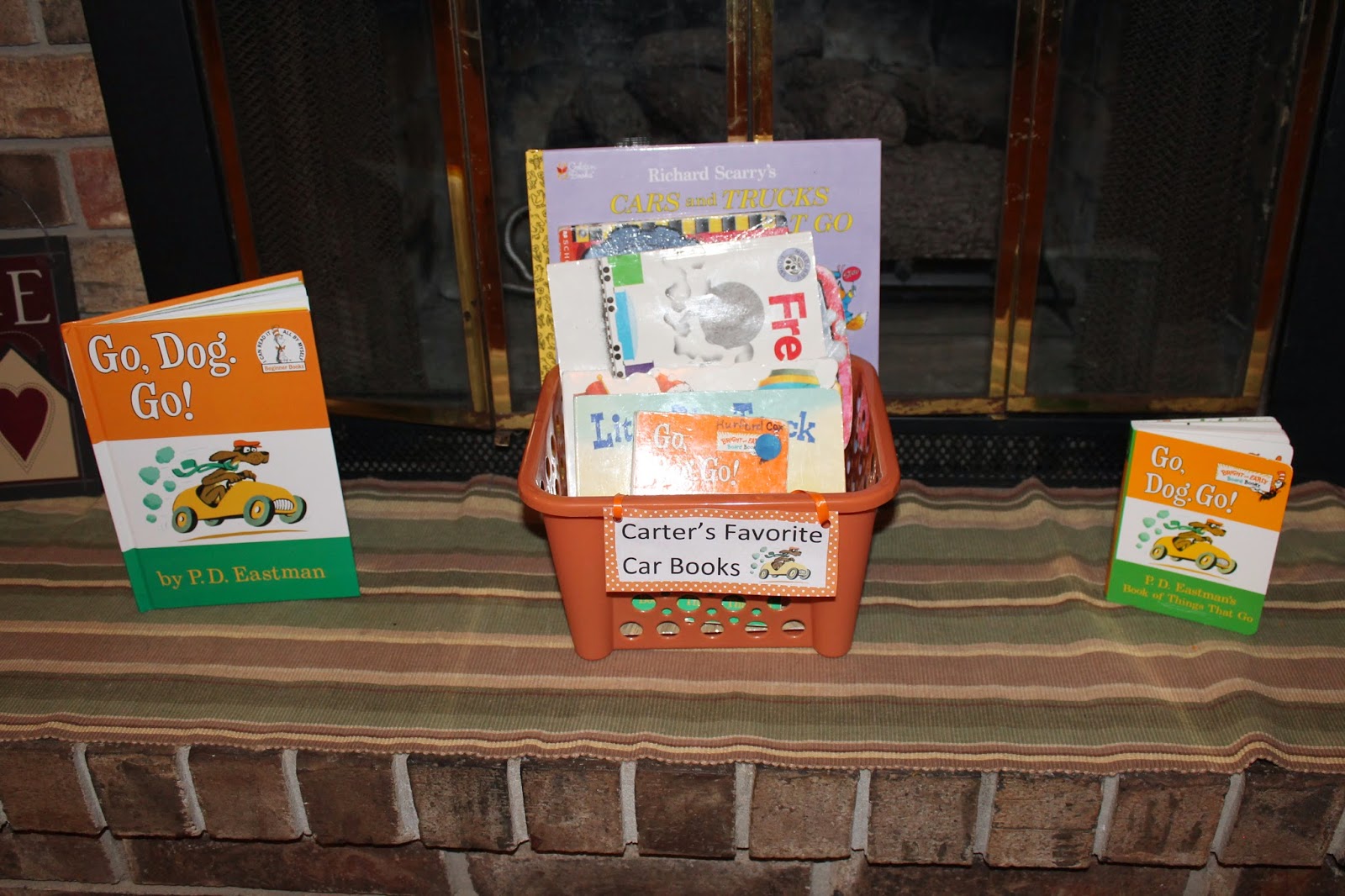 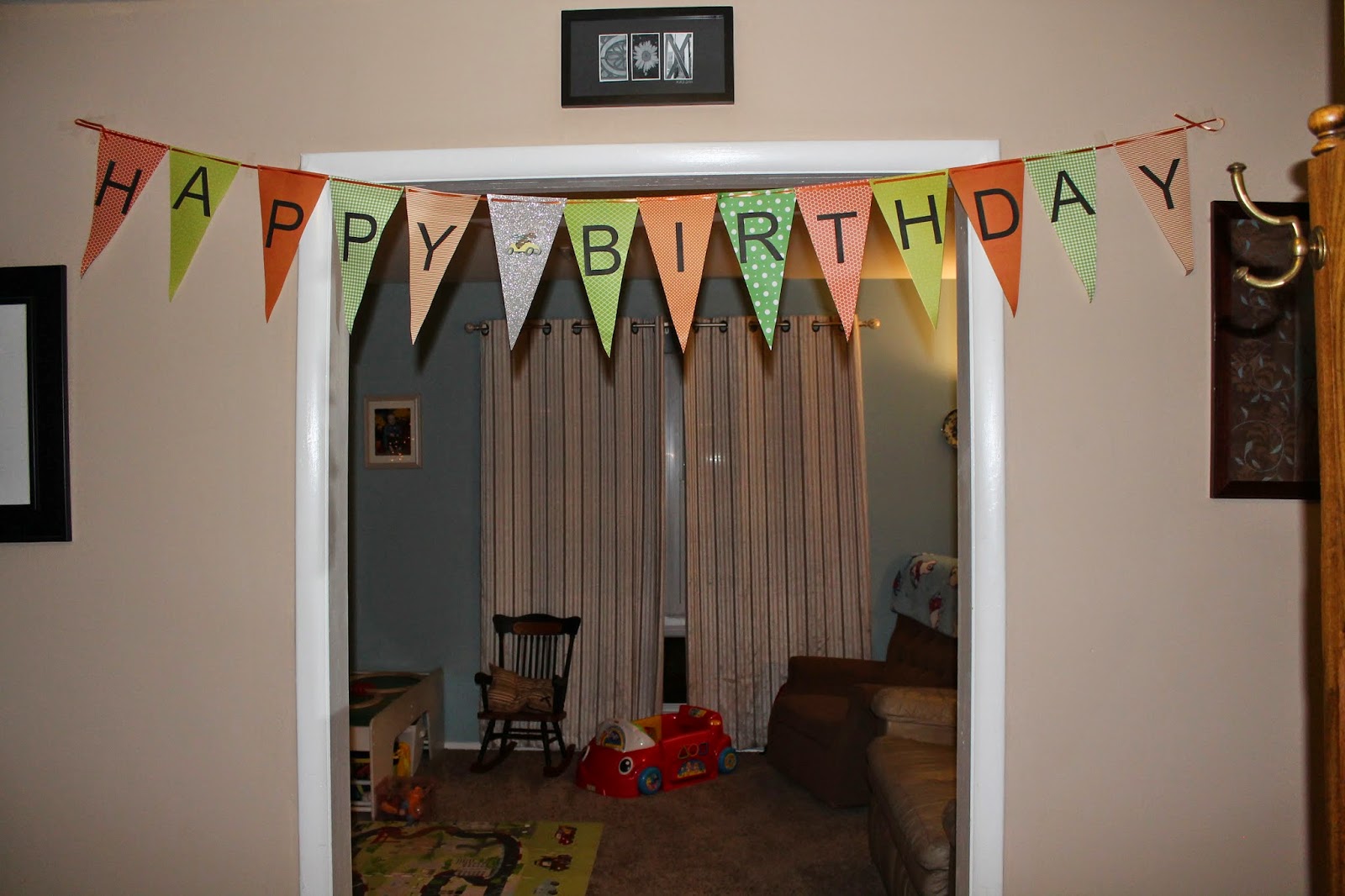 When I thought back on Carter's first birthday I remembered the photo booth we had set up.  Everyone loved taking their pictures in the photo booth and it was so much fun to look back at the pictures.  I knew I wanted to have some kind of picture opportunity, but I wasn't sure what.  I pondered it for a while and then when Ty was turning Carter's stroller into a train using cardboard it hit me.  We could paint the car with the dog driving it from the cover of the Go, Dog, Go book on cardboard and leave space behind the dog for people to pose with the car.  Ty brought cardboard home from work and then realized he couldn't draw the dog well enough to complete the task so the Monday before Carter's party I asked my brother, Thomas, if he'd do it and boy did he come through.  It looked absolutely awesome!  It ended up being my favorite decoration at the party. 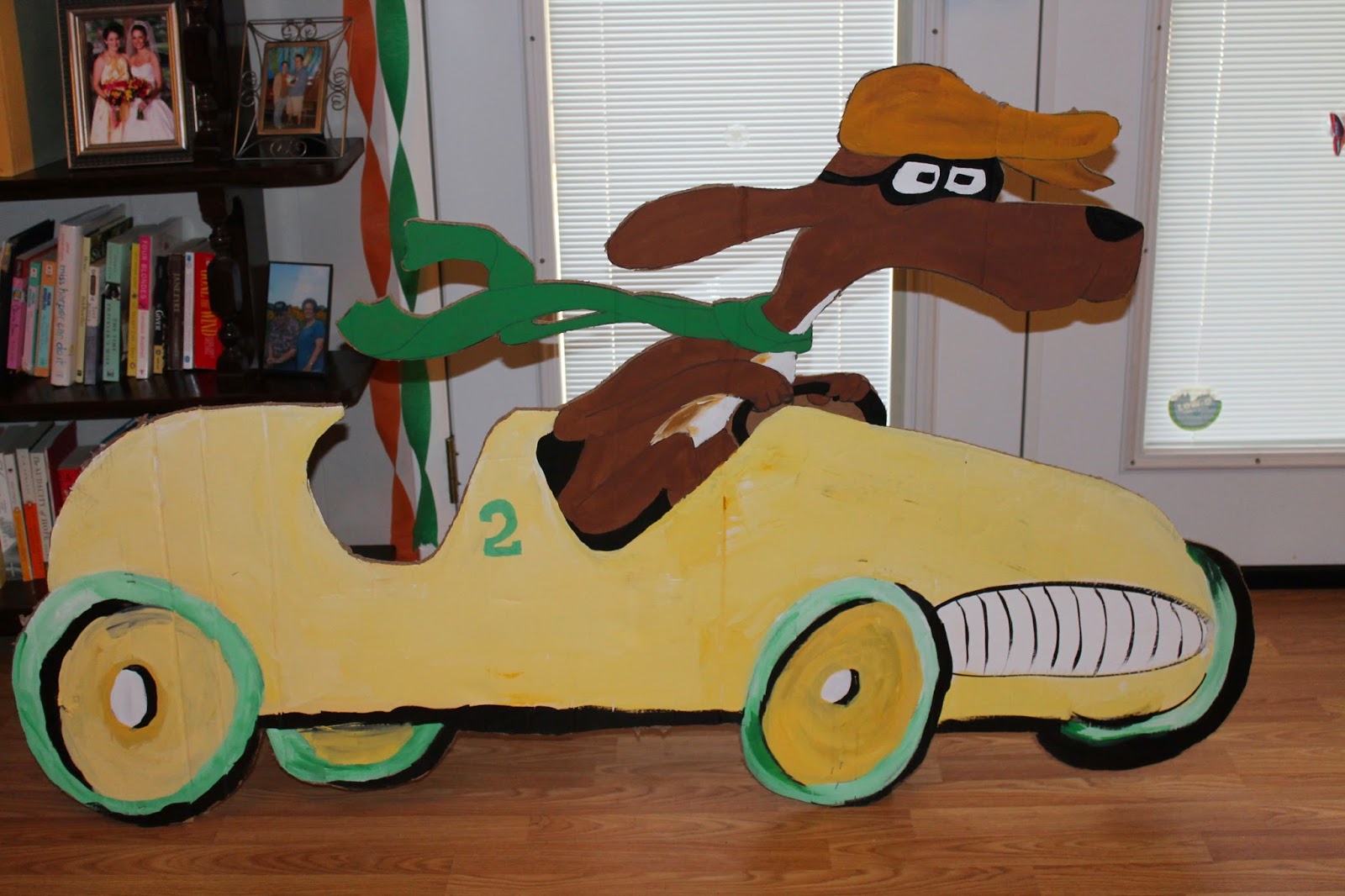 I saw an adorable cake here and knew that's what I wanted for Carter's party.  My mom ordered it from the bakery that did Ty and my wedding cake, Carter's gender reveal cake, and the cake for his first birthday.  Along with the cake she also ordered car cookies and dog cookies.  The car cookies were yellow and Carter thought they were buses.  He kept referring to them as "Caca's buses", it was so cute!

We wanted to keep the food simple and relatively inexpensive.  We made 2 dips, a corn dip that I've been craving and a 3, 2, 1 dip made with 3 blocks cream cheese, 2 cans of Rotel, and 1 pound of sausage.  Instead of buying fruit and veggie trays we made our own.  I decided on broccoli and carrots for veggies without even realizing they would go along with our green and orange theme.  I again happened to pick green and orange fruits for the tray with kiwi, oranges, and a cantaloupe. 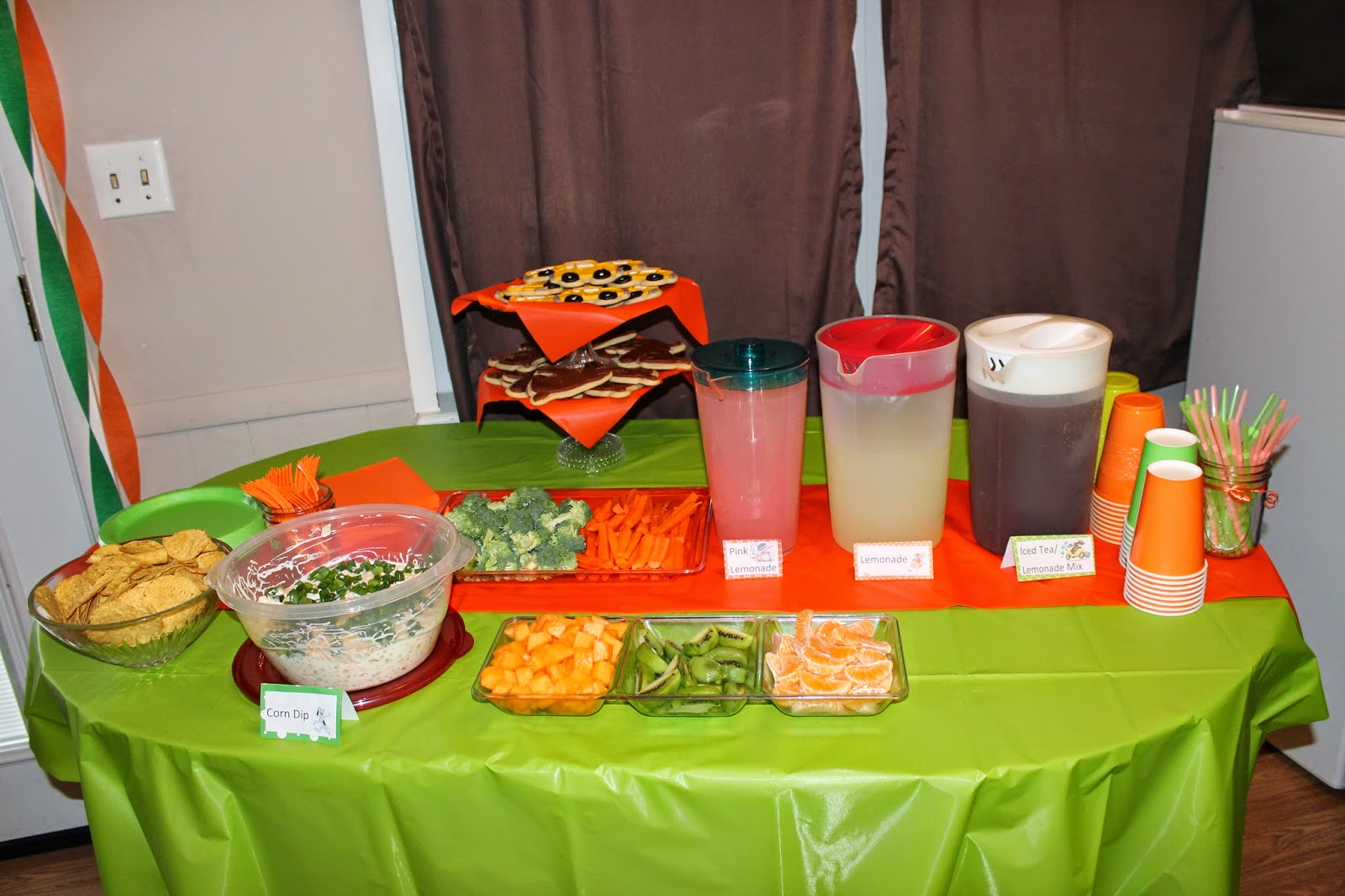 Carter's party started at 2:00 so I put him down for an early nap around noon.  He fell asleep around 12:30 after playing with his buddies for a while in bed.  Right at 2:00 our first guests began arriving.  Ty put a note over the doorbell asking everyone to knock rather than ring the bell so Carter could continue to sleep.  Soon after guests began arriving Carter woke up.  His buddy Landon had just arrived so I took him into Carter's room with me to get him.  Carter was so excited when he saw Landon and came running out to play.  I got them to pose with the Go, Dog, Go car before they took off playing.  Carter's friend, Hayden, also showed up which was equally as exciting for him.  The boys were so cute playing together and were having a blast with all the cars and toys.  At one point Carter went into the other room.  Landon and Hayden wanted to play with the same toy.  When Landon's mom made him share the toy he started crying.  Carter came running into the room saying "Haydy okay?" because he thought it was Hayden crying.  It was so sweet! 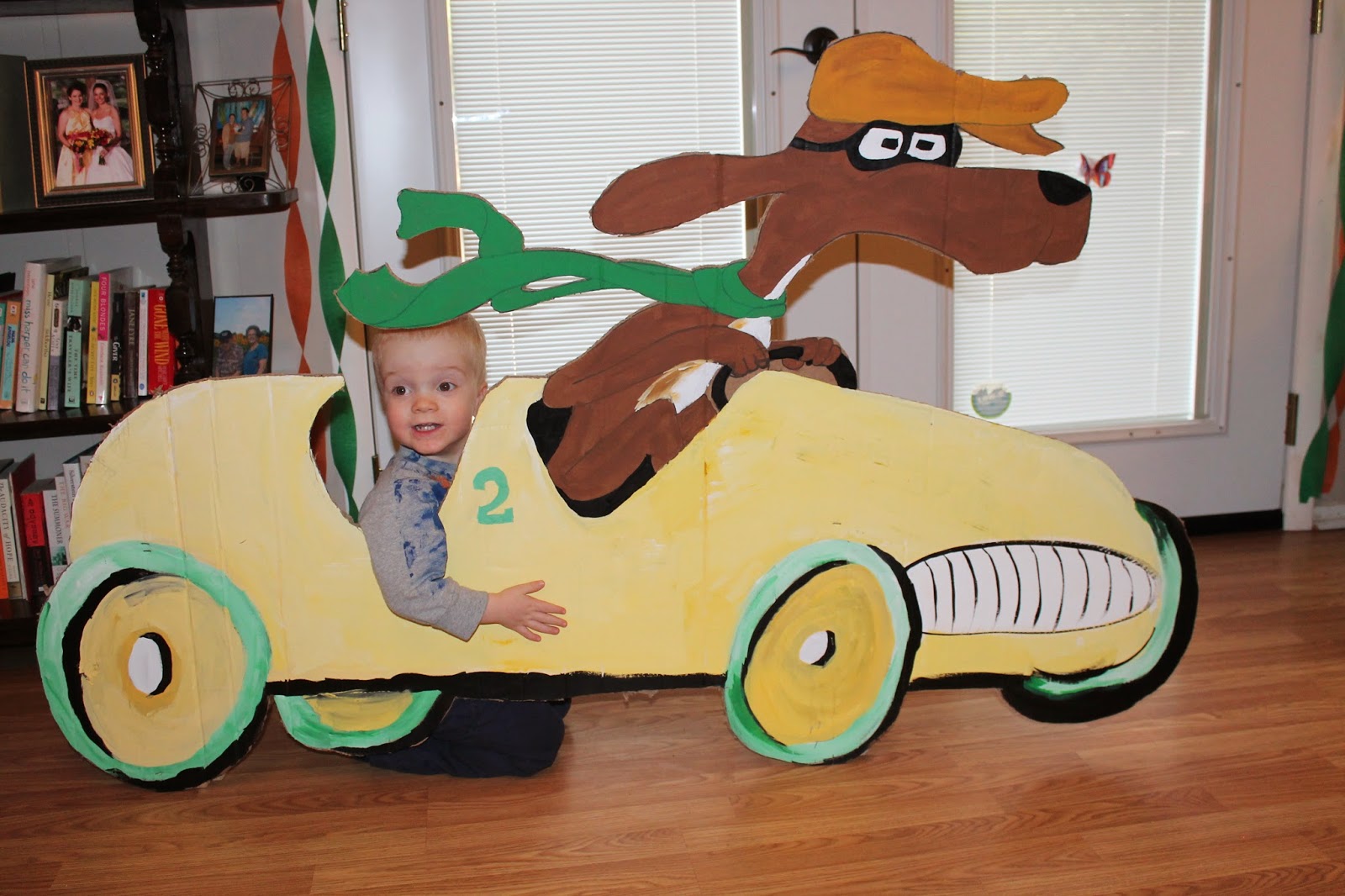 I was having so much fun watching the boys play I didn't realize it was nearly 3:00 and we hadn't cut the cake yet.  Carter had just gone outside to play for a bit so I went out to get him.  We sang him Happy Birthday and Ty helped him blow out the candle.  Little mister was so excited about his cake.  He sat at his little table with Landon and ate cake.  He ate all the icing off the top of his cake and then ate some of his cake.  Then he came over with his fork and swiped about half the icing off the top of my cake.  I looked at Ty's brother, Paul, and told him Carter is definitely my child!  Once everyone had a chance to eat some cake we pulled presents down for Carter to open.  He was very excited about all of his presents and was good about telling people thank you after he opened a package. 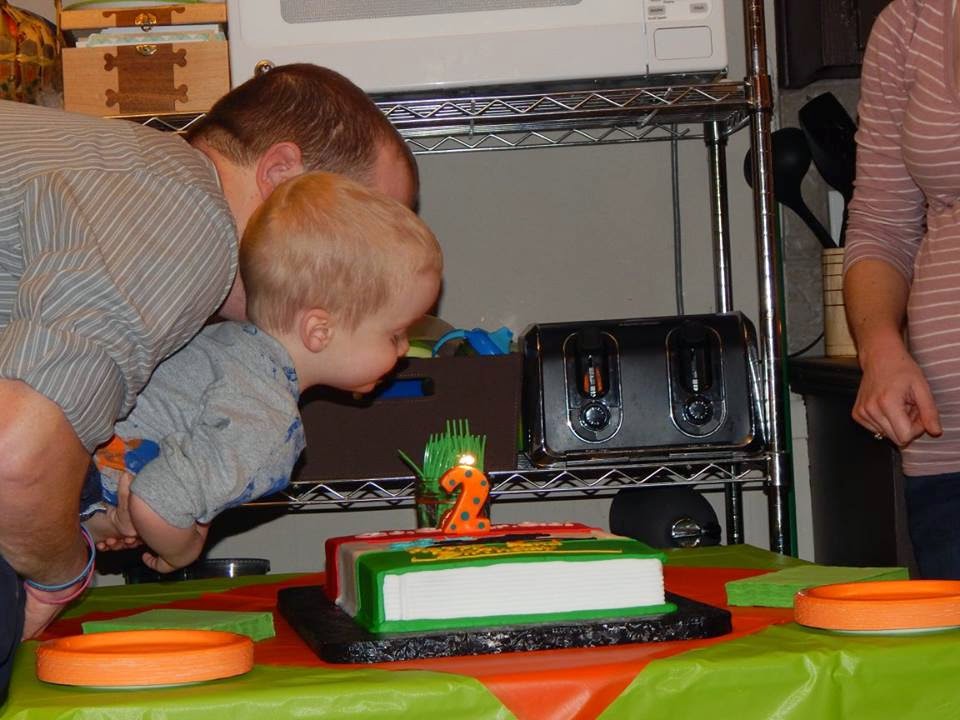 Carter's party was definitely a success.  We ended the night with no leftover dip and all the cookies were eaten.  Carter had so much fun playing with his friends and seeing all of his family.  Both Hayden and Landon didn't want to leave because they'd had so much fun.  We even had leftover car party favors so Carter got a few new cars to play with.  It's always so much fun to celebrate with everyone and for Carter to enjoy the spotlight.  I didn't make as many decorations for Carter's party this year compared to last year which was less stressful.  We had the party at our house this year over renting a place like last year which made for more cleaning before hand and more of a mess afterward which was more stressful.  All in all I'd say the parties were comparable in stress and work for me, but this year was cheaper and Carter enjoyed it more.  Read about Carter's Bow Tie/Tie Themed first birthday party here.

Posted by Liz Runningmomma at 10:49 AM